October 29 2019
14
At present, the Combat, a combined-arms tactical combat trainer (OTT BS), developed by the Kronstadt Group and the Era Technopolis, is currently being supplied with the Russian armed forces. This complex is capable of simulating military operations and is intended to prepare personnel for work in different conditions. In 2017, an improved version of the complex called Combat-E was introduced. According to recent reports, the development of OTT BS continues. 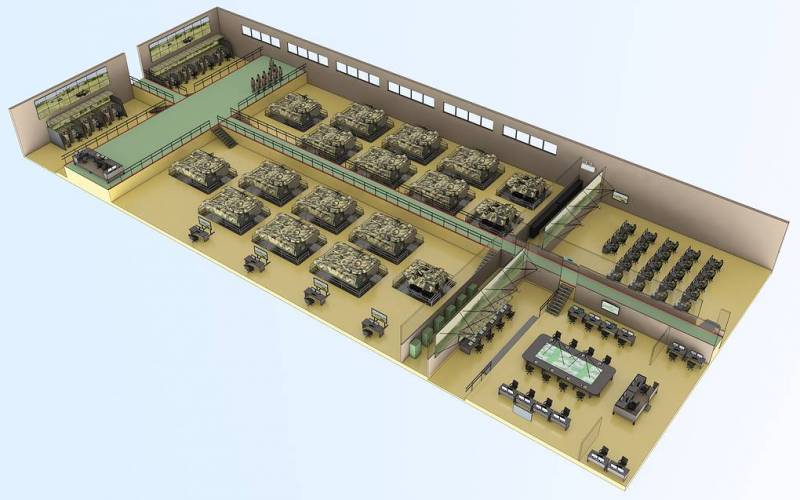 The other day, the representative of the technopolis "Era" revealed some details of the ongoing work to improve the tactical simulator. The current upgrade does not make major changes to the architecture or to individual components of the system. At the same time, a software update is provided.

The combat simulation system is supplemented by new models of weapons and military equipment. Now in "Combat-E" new models of domestic armored vehicles and robotic systems are being introduced. Such products enter service, and they are brought into the memory of the OTT BS. Due to such updates, the simulator meets the modern requirements and the current appearance of the armed forces.

In parallel, a second approach to improving the complex is being implemented. The hardware and software of the simulator, which is responsible for the simulation of hostilities, is based on a neural network. This system, interacting with people, accumulates experience and learns. It is alleged that to date, the Kombat-E neural network has learned to choose the most effective solutions and scenarios that ensure victory over a person. 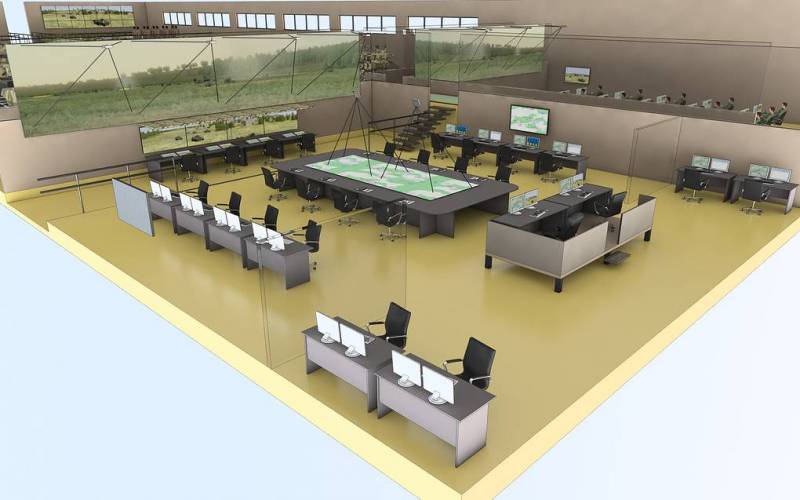 The implemented elements of artificial intelligence are reported to perform well in simulated aerial combat. The neural network has confirmed its ability to defeat living pilots.

The OTT BS “Combat” of the first version began to be supplied to various parts of our army in 2012. Later, the Kronstadt group developed a new version of this Combat-E complex. Now the development of developments on two projects is carried out in the framework of cooperation between Kronstadt and the technopolis Era.

The complex is intended to prepare fighters and commanders for combat operations in different conditions against various enemy forces. Modeled work in the selected conditions according to a certain legend. With the help of Combat-E, combat coordination can be carried out at the level of a platoon, company or battalion. During training, the simulator’s neural network assumes the role of a conditional adversary.

The structure of the OTT BS "Combat-E" includes a large number of different systems and means with which commanders, crews of combat vehicles and individual fighters must work. All components work within the framework of the so-called A single virtual battlefield (EVPB) and interact with each other, as well as with the automation of the complex.

The architecture of the simulator provides high flexibility of its application. At the same time, you can use both all and individual components. In addition, it is possible to scale and change the configuration. EVPB technology can be used to organize interspecific training events.

In the latest versions of the complex, models of modern models of equipment and weapons have been introduced. In particular, unmanned aerial vehicles and robotic systems are integrated in them. An important innovation is the possibility of a relatively simple integration of new learning tools, including from third-party developers.

The use of the OTT BS "Combat" allows you to conduct various training events without going to the training grounds, the organization of live firing, etc. Moreover, in all cases we are talking about simplifying the organization of exercises and improving their effectiveness. 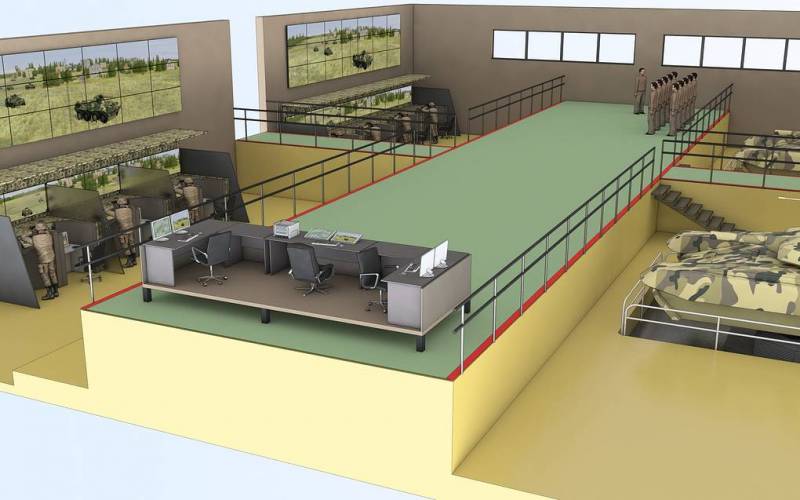 Using the simulator, first of all, reduces the need for trips to landfills. Also with its help it is possible to reduce the ammunition consumption in training firing. Arrows and crews of armored vehicles have the opportunity to work out the use of weapons in a classroom or on a simulator - and only after that use the real weapon on the ground.

Previously, the training of commanders was carried out using available means. In particular, combat scenarios were modeled on maps. OTT BS "Combat" allows you to perform the same work using computer technology. A computer with a neural network more effectively models combat operations with many different factors and variables, which increases the results of training.

The automation of the tactical simulator collects all the data on the work of the participants in the exercise, which can then be analyzed. Based on the results of such an analysis, recommendations should be made - both for individual military personnel and for units. “Combat” and instructors will help determine what issues should be given attention during further training.

OTT BS “Combat-E” can also be used to study promising weapons and equipment at the design level and in the context of application. Modeling a new sample with its subsequent verification within the framework of the European School of Biological Safety provides the development of optimal methods of application, and also allows timely identification of some shortcomings. The conclusions of this stage can then be verified and confirmed by testing real prototypes.

In the classroom and at the training ground

The use of the tactical simulator of combat coordination of the Combat family does not exclude the need for other training activities. Fighters and commanders still need to visit firing ranges and training ranges to practice and test skills on real sites - outside of the European Military School. The basic concept of the OTT BS provides that by this moment the personnel will already have the necessary skills and will be able to solve combat training tasks faster and better.

It should also be borne in mind that even the most advanced electronic systems can not yet fully simulate and simulate real events. The mathematical modeling of real objects is constantly improving, which still has certain limitations. 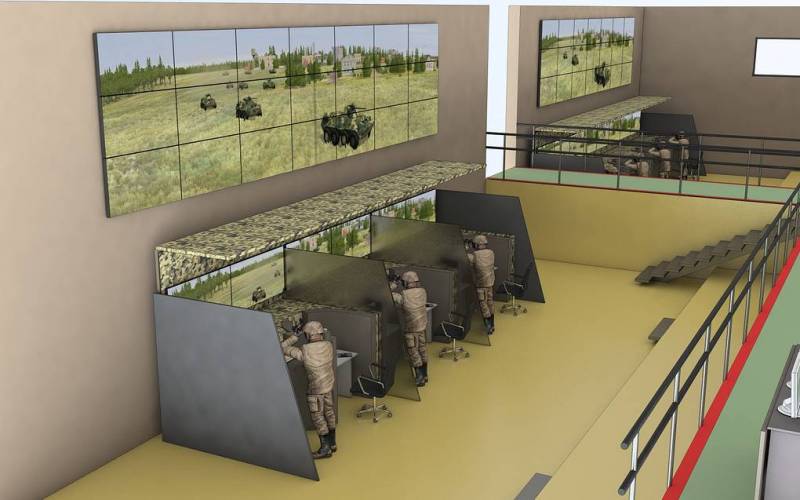 Era technopolis believes that this problem can be solved by further increasing the processing power of the simulators. A potential leap of opportunity is associated with the development of promising quantum computers.

However, the emergence of the most successful and perfect models of the situation, weapons, equipment, scenarios, etc. will not allow to completely abandon the exercises at the training grounds. Battles are always not conducted on a virtual battlefield, and military personnel should be familiar with the real conditions.

For the army of the future

Over the past few years, the Russian army has been actively using a convenient and effective complex to train rank and file and commanders. Combined simulators of the Combat line provide optimization of the learning process, as well as provide some other characteristic advantages.

It should be expected that the “Combat-E”, undergoing modernization at the present time, will also receive wide distribution and will contribute to increasing combat effectiveness. At the same time, it can be assumed that the OTT BS based on current concepts and solutions will retain their place in the future. Timely software updates and the replacement of individual components will ensure such systems meet current requirements for many years.