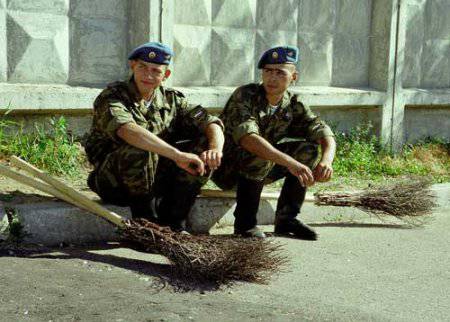 At the suggestion of the Minister of Defense of Russia in the Armed Forces, a five-day work week with two days off will be introduced for conscripts, and civilians will take up the preparation of food for the personnel, the cleaning of the territory and premises in military camps. The Defense Ministry also wants to change the daily routine in the army, making a rise in 7.00, and retreat in 23.00 (now 6.00 and 22.00, respectively). In addition, in all parts it is planned to allocate an additional hour for an afternoon rest. In distant garrisons, conscript warriors will be able to use the accumulated weekends as additional leave. Also, the leadership of the military department came to the conclusion that it was necessary to free the defenders of the Motherland from performing functions unusual for them, which should be assumed by commercial organizations.

Anatoly Serdyukov's initiatives caused a flurry of criticism. Some opponents of the Minister of Defense even express suspicions that there is a secret part of the innovations, in which it is ordered to issue pointe shoes and tutus in addition to soldiers.

Meanwhile, traditionally in the Soviet / Russian army there was a lot in the life of a soldier that was not caused by any strategic / operational necessity, but served solely as a means of creating additional torment. Others and deprivations of military service were invented exclusively on purpose. Even the expression of Alexander Suvorov “It is difficult to learn - easy in battle” in our Armed Forces was interpreted distortedly (the Generalissimo spoke about the organization of combat training, by the way, quite another thing). Soviet soldiers and officers tried to instill many skills that cannot be fixed by the very nature of man. For example, on the maneuvers they constantly tried to teach the fighters not to sleep for several days (instead of rational organization of shift military activities), to carry on 60-70 kg of equipment and ammunition (instead of submitting material resources to the battlefield on time), not to be afraid of bitter cold (which is much simpler than the supply of winter uniforms, which corresponds to the climate of the area where military operations are deployed). Only in the Armed Forces of the USSR, during the period of the Great Patriotic War, personnel did not rely on leave (as there were none of them after 40 years, during the Afghan campaign). Only we did not have such a thing as withdrawal of a part (unit) to rest to restore combat capability (if it was withdrawn, then only headquarters with rear units for retrofitting). Moreover, only in our army there were such phenomena as death from exhaustion (or even from hunger).

To this day, many different kinds of small-scale bullying live and live in everyday peaceful military life. These include, for example, cleaning the territory (associated with all sorts of notions of commanders in the form of calculations on the ground of various figures of stones and cones), aligning the blankets on the soldiers' beds strictly along the stripes, giving the pillows some kind of unusual cubic shape, scraping off barracks floors with broken glass to white, cleaning taps for washing to shine ... and much, much more. Not a single army in the world, except ours, has yet invented the devices for giving the soldiers' beds the shape of a brick. And we still have them in each barracks. This nonsense was sometimes the main criterion in assessing the combat readiness of the unit. Naturally, this did not increase the ability to repel the enemy, but it took a lot of time. If we add to this the guards and outfits, the harvesting of vegetables and other household work, then there was absolutely no time left for combat training. Maybe that is why any war takes the Russian army by surprise.

However, the measures of the Ministry of Defense (and personally the heads of the military department) to overcome these phenomena and to humanize the military service cause gnashing of teeth from other Russian ex-commanders, parliamentarians, politicians and publicists. It is quite possible (and this must be dealt with separately) that most of the critics of Anatoly Serdyukov never underwent military service (and certainly not commanded by companies). After all, it is very fashionable for us to act according to the principle: I did not read, but I condemn, did not look, but did not like it.