October 25 2019
12
Unmanned systems of all classes have already become widespread and are helping various armies. The introduction of elements of artificial intelligence, and then full-fledged autonomous systems of this kind, should become a new step in the development of such a technique. Currently, the American agency DARPA, with the assistance of a number of other organizations, is working on similar issues within the framework of several promising programs. The most successful at the moment can be recognized as the program Squad X.

The interaction of people and technology in the artist’s view

To help the army

On the modern battlefield, soldiers and army units are faced with a number of already known and completely new challenges and threats. They have to maintain the necessary situational awareness, maintain contact with other units and command, and also repel attacks from different directions, including using electronic or cyber systems. Finally, fighters need to carry weapons, ammunition and various equipment to solve the task.

The implementation of the mission has long been proposed to simplify using a variety of technical means. For conducting reconnaissance and fire destruction of targets, various unmanned systems, ground and air, have long been used. Compact vehicles are also being developed for the transport of various property. The Squad X program offers further development of these ideas using advanced technology.

The program proposes to develop a set of key technologies on the basis of which new unmanned systems can be created. Due to special innovations, they will be able to work both with a person and independently. In addition, it is necessary to ensure effective autonomous operation of unmanned vehicles groups. In fact, we are talking about the development and implementation of artificial intelligence systems (AI). 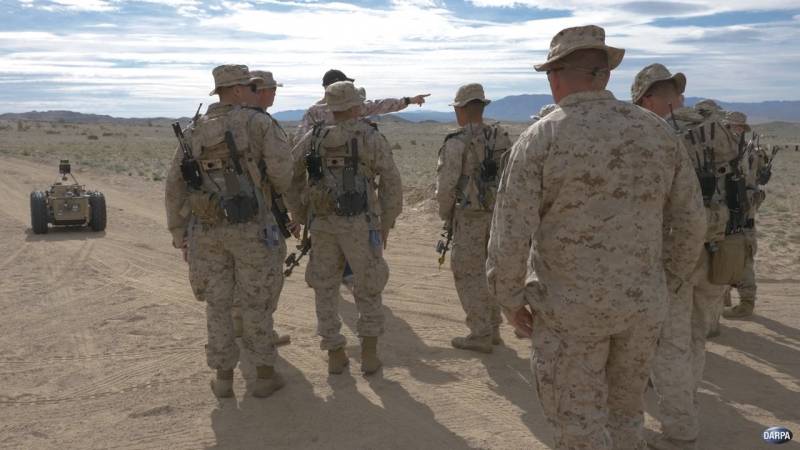 The Squad X system in testing in July 2019. ASSAULTS satchels on fighters, to the left in the distance - BEAM robot

The main participant in the program is the management of DARPA. Industry is represented by Lockheed Martin and CACI. They have already developed and put to testing new types of equipment and technology, built on the basis of recently created solutions.

The work is carried out in the interests of the US Army and Marine Corps. The advent of new technology will allow to remove part of the load from the fighters, as well as provide them with some advantage over the enemy.

The main goal of the DARPA Squad X program is to develop AI technologies for the subsequent creation of real models of equipment suitable for adoption. We are talking about software and hardware systems with the required capabilities and limited dimensions - computers with AI will be installed on ground and air platforms.

On the basis of AI, it is necessary to work out the algorithms for the operation of equipment in the "flock". Unmanned vehicles will have to act both on the orders of a person and independently, and in all cases they will need the ability to analyze the situation and act together. The ability to work in groups will be useful when interacting with live fighters. 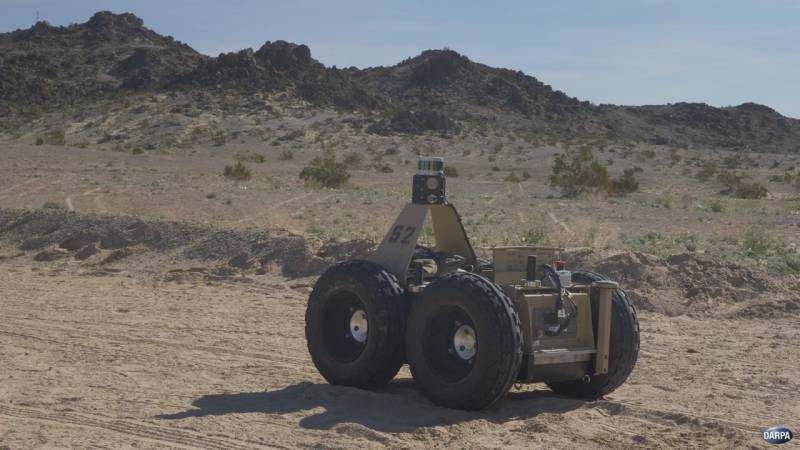 Due to new technologies, future members of the "squad" of Squad X will be able to solve a wide range of combat and auxiliary tasks. At the same time, they will have several characteristic capabilities that increase the overall combat effectiveness of the unit, both with and without human participation.

First of all, it is planned to create a "flock" that includes a number of reconnaissance vehicles with AI. Acting on the ground and in the air, they will be able to study the situation, process data, identify objects seen and transmit data to soldiers. Autonomous scouts will also have to determine the degree of danger of the found objects and draw the attention of fighters to them.

A "flock" will be able to increase the accuracy of target designation and fire. This will lead to an increase in the combat effectiveness of the unit and to a reduction in the consumption of ammunition, which, in turn, will reduce the load on the soldiers and their autonomous transport. The unit will be able to timely identify threats and respond to them. An AI Scout is able to detect an ambush and help in the fight against it. Finally, the devices will be able to pave a safe path for the passage of the unit. 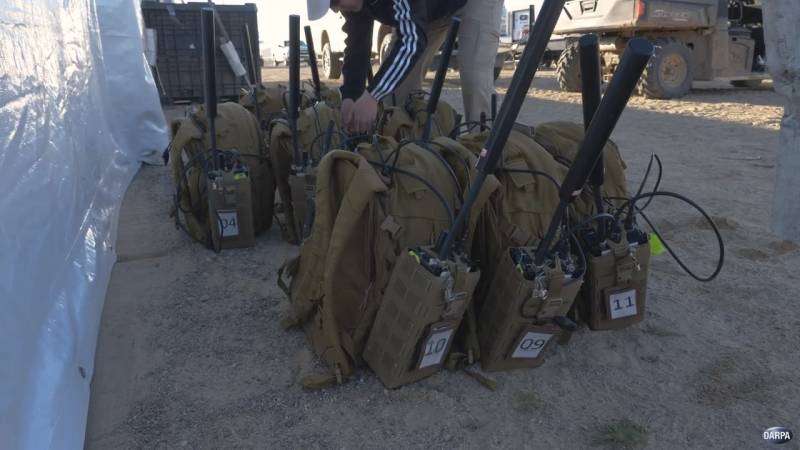 ASSAULTS kits with other soldier equipment

The creation of “swarms” with artificial intelligence makes special demands on navigation, communication and control devices. A unit with people and autonomous vehicles must remain operational under different conditions, including when the enemy uses electronic warfare and in the absence of signals from navigation satellites.

At the moment, developments in the "packs" and AI within the framework of Squad X are associated only with reconnaissance and the combat work of living soldiers. Unmanned vehicles of this program will not carry any weapons. Perhaps full-fledged combat systems will appear in the future - already as part of another program.

The result of the Squad X program to date has been a set of various equipment and techniques designed for field testing. DARPA and defense organizations used the existing developments and created a number of products for various purposes, with the help of which technical solutions are now being developed. 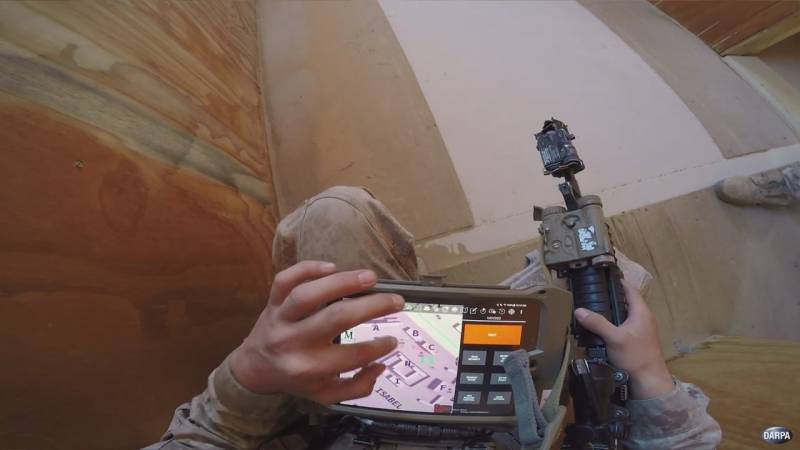 A fighter gets acquainted with intelligence obtained by unmanned aerial vehicles

The pilot “flock” included a ground-based unmanned vehicle BITS Electronic Attack Module (BEAM), developed by CACI. It is made on a wheeled chassis with high cross-country ability and carries a column with a set of various sensors and a video system. Also, the device is equipped with an on-board computer and communications. BEAM is designed for reconnaissance. In addition, it carries electronic warfare equipment, and in the future it can be used to intervene in information networks.

Reconnaissance can also be carried out using an unmanned aerial vehicle of a helicopter type. Due to its limited carrying capacity, it cannot carry sophisticated equipment.

Lockheed Martin developed the ASSAULTS kit (Augmented Spectral Situational Awareness and Unaided Localization for Transformative Squads) to equip soldiers. It includes communication tools, remotes for interacting with equipment, etc. All equipment for the soldier is assembled in the form of a satchel. The unit uses an all-terrain buggy with seats for transporting people and drones. It also houses part of the electronics and communications equipment. 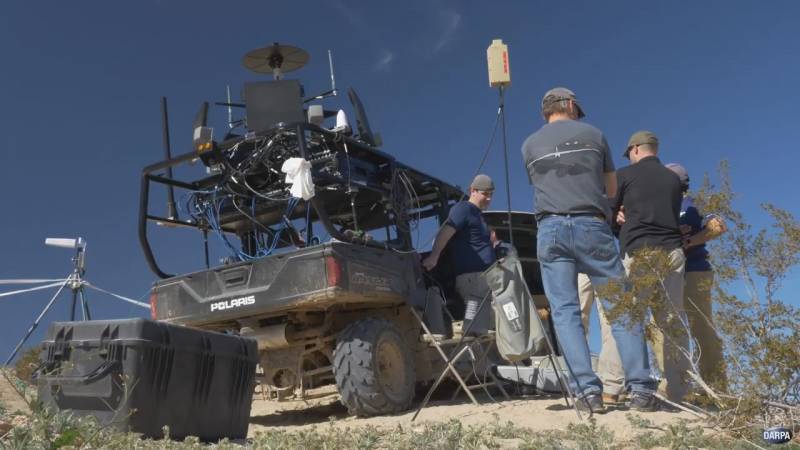 Buggy with the equipment of the complex

The first tests of the Squad X pilot complex took place in November last year at one of the California landfills. The technique showed its basic functions, and also confirmed the fundamental possibility of its further development. Particularly difficult tasks associated with the use of AI and all the "flocking" capabilities were not used at that time.

In July 2019, DARPA conducted new tests. In the conditions of a training ground imitating urban development, a unit with special equipment conducted reconnaissance and solved a combat training task. It was alleged that the "flock" showed itself well and coped with its responsibilities, but technical details were not disclosed. At the same time, the need to continue the development and refinement of equipment was noted.

Project for the future

DARPA, Lockheed Martin and CACI have already carried out two stages of field testing of new equipment and equipment, the results of which continue to develop the project. In the near future, new inspections are expected under conditions as close as possible to combat ones. The Squad X project is known for its complexity, and therefore in the future, new trials and tests may be needed. 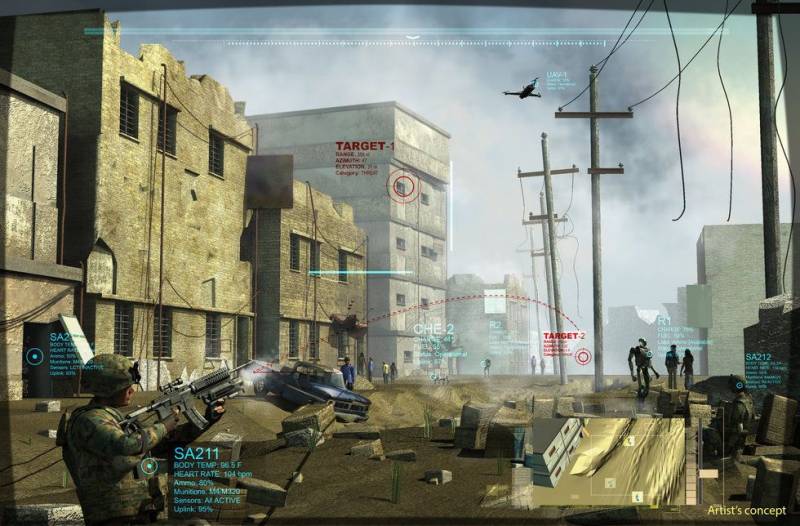 The main result of the current DARPA Squad X project will be the set of technologies and solutions needed to create autonomous machines of various types that can interact with people and with each other. Such developments can be used in any new projects.

The experimental equipment used in the tests meets the requirements of the military. Owing to this product ASSAULTS, BEAM, etc. can enter service as a multi-purpose reconnaissance and information complex with transport functions. In the future, the development of new intelligence systems and information support is not ruled out. In the future, other complexes may appear with the possibility of carrying and using weapons.

However, while the main task of the project participants is the search and development of basic solutions for creating such systems. There are some successes, but it is still far from completion. Nevertheless, DARPA experts are full of determination and intend to bring the project to its logical end. After that, the development of full-fledged samples for operation in the army and the ILC will begin.