Victory that led to defeat

The understanding that the United States is rapidly losing credibility in international politics is forcing Washington to seek more and more options for victory that would enhance the credibility of the American army and the United States as a whole. It is clear that the Americans will not openly fight with a strong opponent. The vaunted U.S. Army is not adapted to a large war of the World War II model. 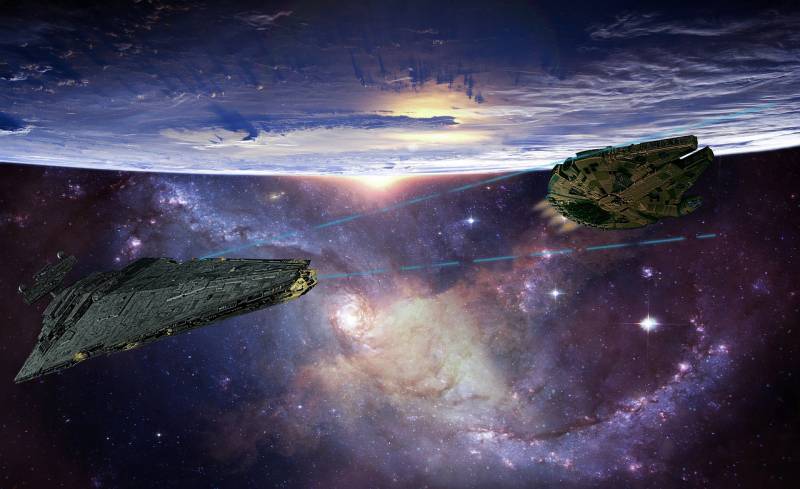 More recently, just a few years ago, in order to show the power of the American army, it was enough to defeat a small, not very developed militarily state or even conduct a short-term military operation to replace the government and as a result get the admiring views of half the world. And the dominance of the dollar, which was the basis of US economic superiority over other countries, significantly helped American presidents.

But time is running out. While Washington experienced "dizziness from success," from "victory over the USSR" and reaped the fruits of this Pyrrhic victory, the world was changing. Those who until recently “were nobody” began to declare their ambitions louder. China, which was laughed at recently, telling jokes about the Chinese army and the Chinese economy, suddenly didn’t just “get into a pose”, but showed its readiness to use sharp “fangs”, which for some reason the Americans had no idea. Powerful India and Brazil appeared.

The war in Syria has shown the world that the vaunted American army is actually quite equipped and armed, but it is not as powerful as the Pentagon says. The power of american aviation, Air defense, American weapons in general, not to mention ground units and subunits, turned out to be zilch. American planes were frankly afraid of the Russians, and ground units did not meddle in areas where Russian specialists worked. Russia in Syria has shown that we are equal, we are no worse than the Americans.

It must be admitted that the Pentagon tried to revive the myth of its own power in other regions of the planet. He tried to play the scenario of "lightning war" in the DPRK. But in this case, received the completely opposite result. Huge fleet, aviation, nuclear weapons and other horror stories of Americans did not frighten North Koreans.

It turned out that the small, impoverished and “destroyed by international sanctions” North Korea is not only ready to die for its own land, but also ready to destroy the “great” Americans along with their allies. The Korean "cat" showed the world that it is, although small, but a "tiger". Koreans showed fortitude that made Americans uncomfortable. And the US was frankly scared ...

"Cartoons", from which throws into a sweat

World media do not leave the topic of drone attacks on a Saudi oil refinery. Moreover, it is interesting that almost no one is interested in the financial losses of Saudi Arabia, however, as well as human losses. Journalists write about weapons. The fact that the American air defense system was powerless against fairly simple strike drones. The Arabs, probably for the first time, realized that the ability to defend themselves does not depend on the cost of air defense systems.

Such an understanding, especially against the backdrop of numerous reflected drone attacks on the Khmeimim military base and port in Tartus, is worth a lot. It is no coincidence that at the UN session, Russian Foreign Minister Lavrov met with the Minister of Foreign Affairs of Saudi Arabia on the very first day. The conversation was not "for life", but specifically about the state visit of President Putin to this kingdom.

Remember how it all began? With an open threat to Russians from the West in general and the United States in particular. "We will drag you into the arms race and you will follow the path of the USSR, having lost everything in the struggle with the whole world." And these threats were very real. Only now Russia answered in its own way. Quite unexpectedly, if you like. The Russians showed ... cartoons. Cartoons about weapons, which simply can not be!

How many malicious articles then were in the world press. How many experts talked about the fact that this cannot be, because this can never happen. And it all ended with the fact that the media published reports about successful tests of a hypersonic missile ... Then about the next tests. And the following. The world press shut up right away ...

So, Russia has responded to the threats of the West. The answer practically nullified the many years of US efforts to neutralize Russian strategic missiles and organize the defense of their own state. It's no secret that Americans are panicky afraid of war on their own territory. They are used to the fact that world wars, and indeed wars in general, always go somewhere far away. In Europe, in Oceania, in Africa, but not on the American continent.

American scientists began developing systems similar to Russian ones. The headquarters of the American army are developing options for a possible response to the actions of the Russian army. In general, work is ongoing. But time! This is probably the first time the United States has been caught up. Now it is necessary to develop not weapons of attack, but weapons of defense. It is necessary to neutralize the Russians. And time trouble always costs a lot! Russia not only repulsed the blow, it itself attacked.

President Trump did not invent a bicycle. He simply decided to repeat the bluff successfully applied by President Ronald Reagan against the USSR in 1985. Probably, many remember the famous "Star Wars", the SDI (Strategic Defense Initiative) program. It was then, in the framework of the SDI, that President Reagan created the Space Command of the US Armed Forces. In principle, the creation of such an organ was then logically justified. There are SOI, there are those who must command. It is clear that after the "death" of the SDI in 2002, the command disappeared as an independent unit.

What do we see today? About the same bluff, only in the performance of Trump. On August 29 of this year, the American president solemnly announced the creation of a new structure in the US Army - the United States Space Command.

If we discard beautiful words, in the bottom line we see just one of the 11 commands in the Pentagon structure, which, unlike the others, controls not a certain territory, such as, for example, the African or European command, but the sky. Simply put, everything that flies above 100 kilometers from the surface of the earth.

It is not clear, however, how the new command will coexist and already exist as part of the US Air Force (Air Force Space Command). Today, it is the space command of the Air Force that is engaged in "military space." And in terms of numbers (data from open sources) the command is not from small, 25 thousand people.

The new command will constantly grow numerically. If today most of them will be transferred to the Air Force officers (151 people), the army (24 people), fleet (14 people) and other structures and the total number of command is estimated at about 200 people, then within five years the total number should reach 15-20 thousand people. It is planned to include educational institutions, missile defense specialists, training ranges, experimental squadrons, satellite control groups and more in the United States Space Command.

You can talk as much as you like about the military budget’s dribbling, about the growth of the US military bureaucracy, but we must admit that the planned actions speak about the creation in the United States of a new, independent type of armed forces - space forces. More precisely, space forces, according to the American tradition (Space Force).

Thus, the American army will have 6 types of aircraft: the army, air force, navy, marines, coast guard and space forces. By the way, according to US media reports, negotiations on creating a new type of armed forces have long been in the US Congress and are close to completion. The consent of the Congress is practically obtained.

Why do we need the United States Space Command

Washington is well aware that the military dominance of the US military is ending. Today, the United States is in the same position as the USSR in the last years of its existence. "Friends", who recently looked into the eyes of the American president and readily loyal dogs rushed to execute any order from Washington, today are increasingly looking in the direction of a potential enemy. Flock animals always strive to be in a strong flock.

To achieve military dominance, which was to date, the United States in the short term today is unable. An understanding of this fact led to the emergence in the headquarters of the US Army of a new concept of warfare - multilateral war. The war, according to this concept, will now be fought not only on land, on water (under water) and in the air, but also in space. Even on other planets, if necessary. Hence the US desire to develop military space. The desire to establish the dominance of American weapons in space.

Like any command of the US Army, the Space Command will primarily develop a new doctrine of the use of spacecraft for "active defense". Next, active development of military satellites for various purposes will begin - from attacking to fighter satellites of alien spacecraft. Probably, special space stations, space platforms for combating ground-based objects will also be developed. In general, military space can be developed in almost all directions.

Today we can say that in this situation, the United States is quite capable of creating space forces, even despite huge costs. And the attitude of Americans towards various treaties and other agreements is already well known to everyone. At present, only we can confront the Americans in space.