July 10 2012
25
For the first time, Beltech’s self-propelled Karakal anti-tank systems of Belarusian production with the participation of the Luch Kiev design bureau were talked about after the IDEX-2011 exhibition, where it was first demonstrated on February 20 of 24-2011. According to the developers of the company, in Abu Dhabi, they signed a contract for the delivery of a certain number of copies of "Caracal" in one of the eastern countries. What is a country is still kept secret. In addition, other states of the region showed interest in the complex. The next appearance of "Caracal" occurred 24-27 in May last year in Minsk at the sixth international exhibition MILEX-2011. This complex has become one of the few that the Belarusian defense industry has created from scratch and brought to production readiness, the earlier projects were worn mainly in the form of upgrading old complexes and replacing them with separate units. 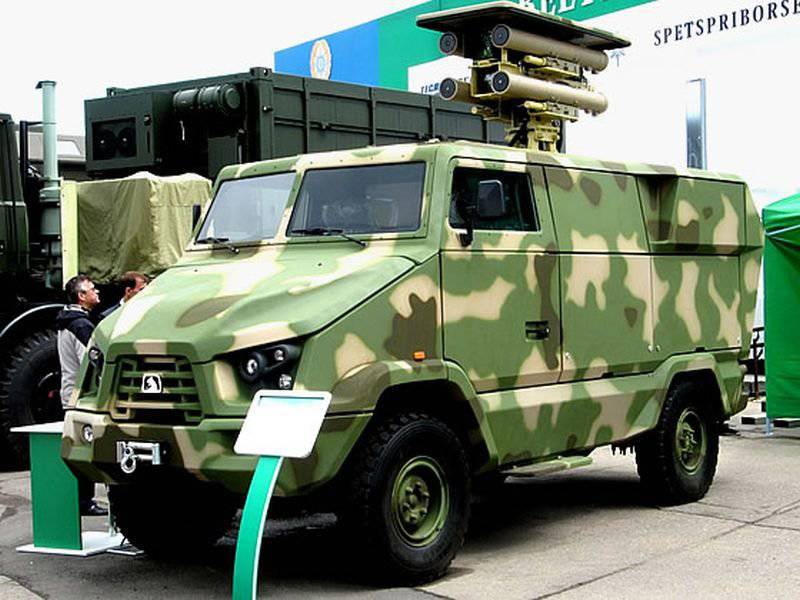 The main purpose of the new complex is to defeat a potential enemy armored vehicle, even a vehicle equipped with dynamic armor protection, defensive and protective structures, surface boats and ships, and airborne objects at low altitudes. The presented complex is made on the basis of a light-armored car with the wheel formula 4х4, produced in Belarus. The car is divided into two isolated compartments:
- the front compartment serves to accommodate a crew of two people;
- the rear compartment is used to accommodate a retractable transport and launcher.

The TPU has 4 anti-tank missiles Barrier, developed by the Ukrainian Luch design bureau. Between the two blocks of two rockets, in the center of the TPU placed the electro-optical equipment and infrared sensors. The capabilities of the complex "Caracal" - automatic target tracking with laser-guided and the defeat of two targets simultaneously. In addition, in the manual mode, the rocket is controlled by the operator using telemetry, the rocket is guided by a joystick at the selected target, it is possible to turn on the automatic mode after aiming. Homing can be done azimuthally in 170 degrees and in elevation in 15 degrees.

During the transition from the marching mode to the combat mode, the TPU extends upward, while the manhole cover remains on top of the TPU. After the launch of ammunition TPU automatically returns to its original position, where the automatic reloading of the installation. Full ammunition missiles "Barrier" - 12 units, of which:
- Four ATGMs are ready for use;
- four ATGM are ready for automatic loading;
- Four ATGMs are located in combat deployment.
In addition to the retractable transport and launcher, in the rear compartment is a remote installation of the complex "Caracal" - ATGM "Skif", which houses one ATGM. 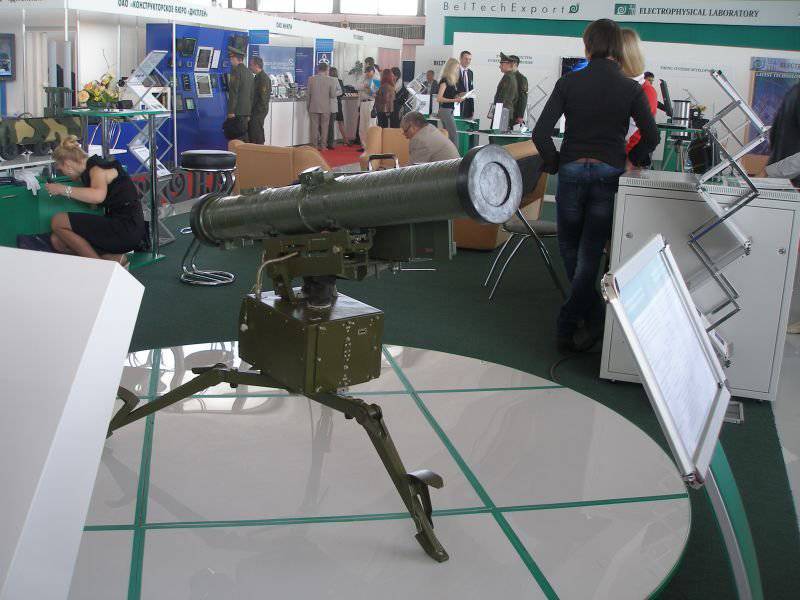 It can be controlled remotely using a laptop computer at a distance of up to 50 meters. Deployment of SPU on the ground does not take more than 5 minutes. ATGM "Barrier" can be equipped with combat units of various types, such as tandem, armor-piercing or cumulative. According to the results of the ground tests, from the 10-ti ATGM 8-9 ATGM can accurately hit a given target. Declared armor penetration - 800 mm dynamic protection. Especially for the complex "Caracal" developed a rocket with thermobaric warhead. 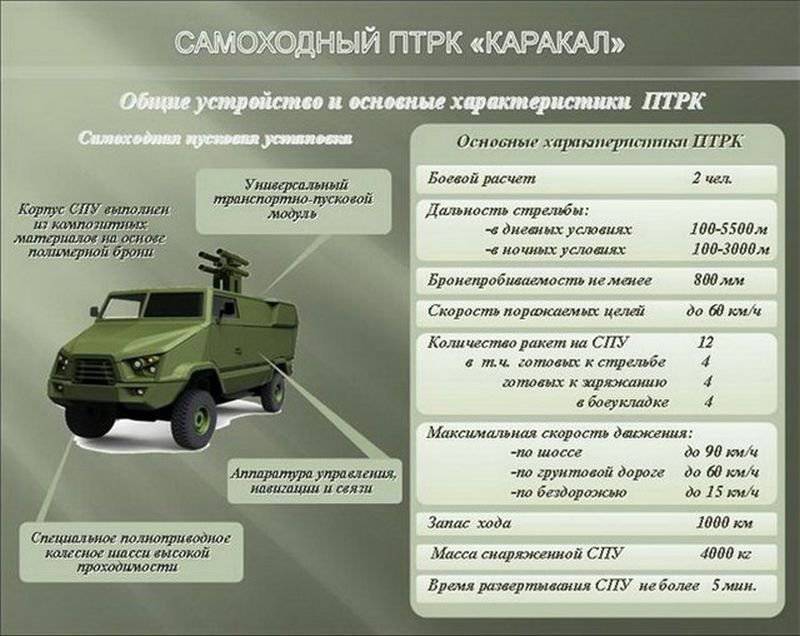 In addition to the automobile chassis with different wheel formula, the designers are ready to carry out the complex on a tracked chassis, provide them with surface boats and ships, and produce the complex on stationary platforms.

In general, “Caracal” is a whole complex of counteraction against the occurrence of a potential enemy. This complex includes:
- control system - a combat control machine, from which the entire complex is actually guided;
- reconnaissance system - reconnaissance vehicle with drones of the Midivisana type and ground control complex. Built-in radar provides detection at a distance of 20 kilometers, the use of UAVs increases the detection area to 30 kilometers;
- mobile means of firing - mobile launcher with P-2 “Barrier” ATGM. In one unit can be from 4-x to 6-SPU. It is this individual universal SPU that is mistaken for the whole complex of KARAKAL anti-tank systems, although it is possible to use SPU separately, since the own SPU equipment is capable of detecting targets at a distance of 7 km;
- a system of technical support and support - an MTO machine in which SPU maintenance equipment is transported and delivered. In the division, the number of machines MTO - one machine for three self-propelled PU complex. 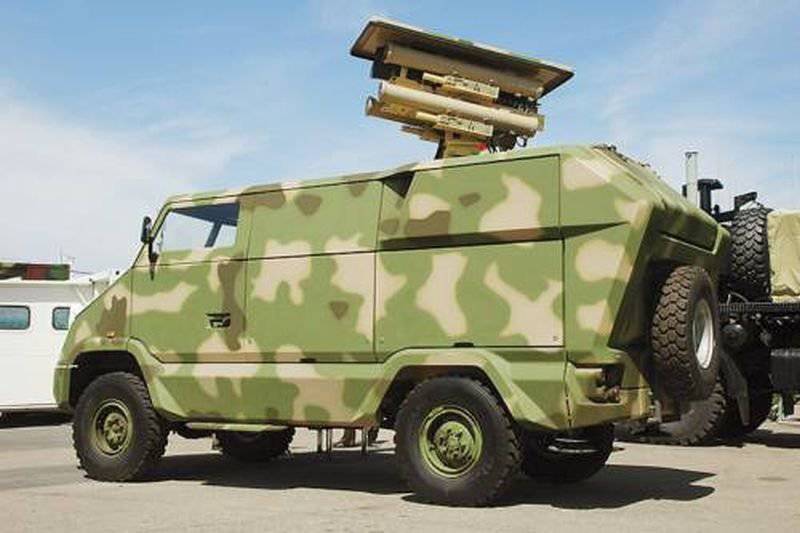 All systems of the complex are made in the same type composite case, which is based on polymer armor. Armor case technology-combined, multi-layered. Such solutions reduced the radar visibility of the complex and provided effective protection. On request it is possible to install a dynamic protection class, according to the STANAG 4569, 1-4 level. In front of the car to protect the crew, it is possible to install bullet-proof windows.

The Karakal complex, as part of a single unit, can carry out long autonomous operations, first destroying the cover of enemy units, aircraft, then the main mechanized forces and enemy enemy manpower. Belarusian designers, for the first time since their independence, have created a single anti-tank system, provided with their own means of control and intelligence. In addition, the complex can serve as the basis for a unified enemy fire attack system, where not only SPU with anti-tank guided missiles, but also cannon artillery units and MLRS can enter. For the operation of these units in a single system will be enough use to adjust the UAV complex "Caracal". 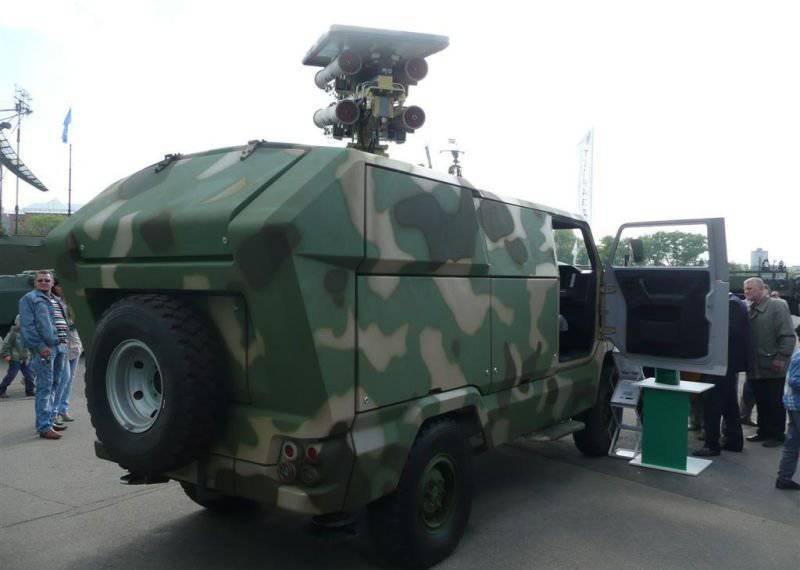 The main advantages of the new complex:
- high maneuverability and mobility;
- automatic recharge TPU;
- an additional opportunity to fire from the remote PU;
- firing by the operator immediately from the SPU and remote PU;
- automatic tracking of detected objects;
- Increased maintainability, due to the availability of MTO machines;
- one SPU is able to withstand / destroy one tank company - 10 tanks;
- one unit consisting of the full complex "Caracal" will stop / destroy the 1-n tank battalion.

Additional Information
27.11.2011 of the year at the military parade on the independence day of Turkmenistan in the ranks of the armed forces, marching along the main street of Ashgabat, were marked SPU complex "Caracal". Probably, Turkmenistan is still the main customer of the new Karakal anti-tank systems.