Research and technology: Su-47 as the predecessor of the fifth generation

2 September 2019
77
This year, as part of the static exposition of the MAKS air show, a very interesting specimen was present - the experimental Su-47 Berkut fighter. This aircraft was once created to search for new solutions and develop promising technologies. He was not able to get rid of the status of a purely experimental machine, but a number of developments found application in the following projects and positively influenced the development of our aviation.

The only Su-47 in the process of rolling out onto the MAX-2019 platform. Photo Vpk.name

The main goal of the Su-47 project, with which all other searches were directly related, was to study the so-called reverse sweep wings (CBS). Domestic aircraft designers began to study this topic in the mid-eighties, and soon a preliminary draft of a fighter with a CBS called C-22 appeared. Subsequently, he "grew up" in the new C-32 project, and in the early nineties work began on the C-37 aircraft, also known by the Su-47 index and the name "Golden Eagle".

Already at the stage of theoretical research, it became clear that the aircraft with CBS needs a new optimized aerodynamic design. In addition, new approaches and materials are needed to design a glider under special stress. The reserve for the future was also worked out in the context of increasing maneuverability by various means. To control the new machine required special on-board systems.

As a result, by the mid-nineties, the C-22 / 32 / 37 project acquired a special scale. Work was carried out in the fields of aerodynamics, materials science, electronics, etc. Their result was the creation of a number of new components and technologies necessary for the "Golden Eagle" and suitable for use in new projects. Part of the developments on the C-37 was used to create new models of equipment - primarily the fifth-generation fighter PAK FA / T-50 / Su-57. 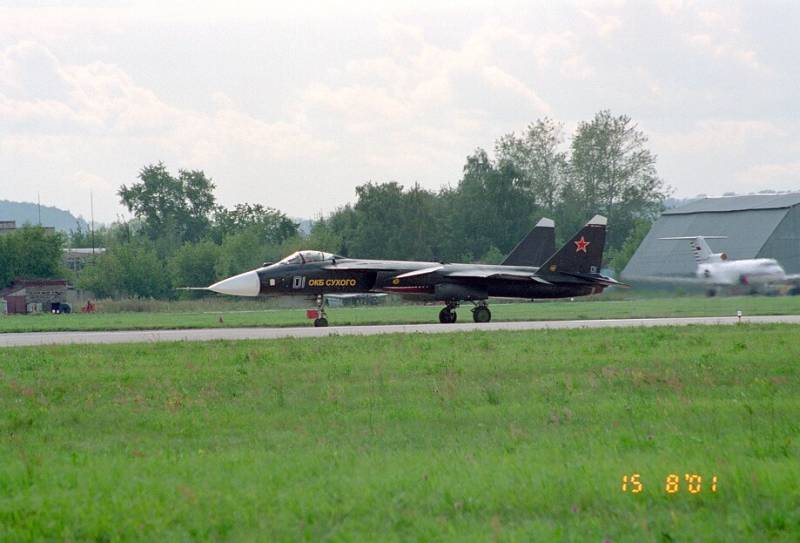 It should be noted that the bulk of technical information on the Su-47 and Su-57 is still closed, and this seriously complicates the search for similarities and differences. However, the available data on modern projects still allow us to determine which innovations of the Berkut proved useful, and which remained at the level of experiments.

Glider and its features

The Su-47 glider is built according to the scheme of a longitudinal triplane - it has a front horizontal tail, a CBS and a tail stabilizer. Such a scheme, otherwise implemented, has been repeatedly used on Sukhoi aircraft as part of the Su-27 family. At the same time, there are no direct “successors” of the Su-47 from the point of view of the scheme, because we did not build new aircraft with CBS. As for the Su-57, it received other equipment. In particular, instead of the PGO, it carries deviating socks of the influx of the wing.

The main difficulty in creating CBS is to ensure the strength parameters of the structure. Such a wing is prone to so-called elastic divergence: under the influence of aerodynamic forces, the plane twists, which can lead to its destruction. Strengthening the design by traditional methods leads to mass growth and other problems. In this regard, a brand new wing made of composite materials based on carbon fiber was developed for C-37. It combined the required stiffness and strength with an acceptable weight.

Various composites were used not only in the wing of the "Golden Eagle". Panels of this kind were present on the fuselage and plumage. The total proportion of composites in the construction was 13%. At the same time, the wing had 90% of compositional details.

Developments in the field of composites directly influenced all new projects in aviation technology. So, in a Su-57 aircraft, composites account for 25% dry weight and 70% external surface. However, the types and grades of the materials used are unknown, which does not allow us to draw more serious conclusions about the continuity of the two structures.

According to early plans, the C-37 was to be equipped with a fully digital remote control system with several redundant channels. Due to such equipment, it was planned to ensure the stability of the aircraft of a special scheme and to simplify the work of the pilot. Automation could take on the job of stabilizing the aircraft, while a person could only control the flight. Similar principles, but at a new technical level, have been implemented in other promising projects.

The basis of the aiming and navigation complex was to become a radar station with an active phased antenna array. Now such equipment is considered mandatory for modern fighters. An interesting feature of the "Golden Eagle" was the presence of a pair of radar antennas in the rear of the fuselage to view the rear hemisphere in order to increase situational awareness. 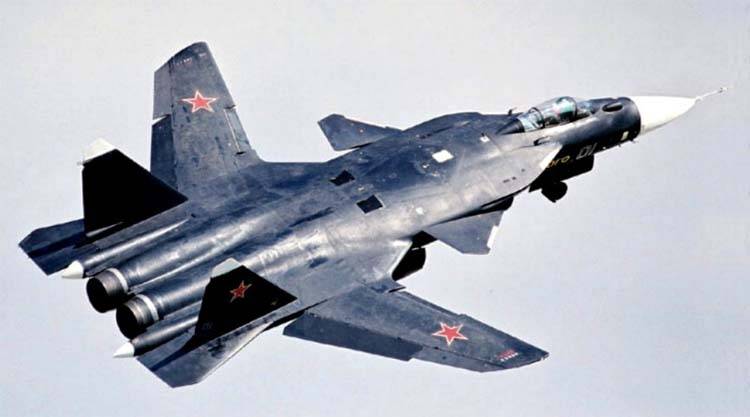 A characteristic feature of the "Golden Eagle" is the developed mechanization of the planes. Photo Airwar.ru

Similar ideas were developed and led to interesting results. According to open data, on the Su-57 there is not only a nasal AFAR radar. Other antenna devices and sensors are distributed along the glider, which simultaneously collect data from all directions.

In general, the electronic equipment of the experimental fighter was to be based on modern components that were at the forefront of science and technology in the nineties. A number of such technologies remain relevant until now.

An experienced C-37 / Su-47 received a pair of dual-circuit turbojet engines D-30Ф6. The entire flight test cycle was carried out with such products, and on the MAX-2019 the fighter is present in such a configuration. Nevertheless, in the past there were reports of a possible replacement of engines, including with the introduction of new technologies. 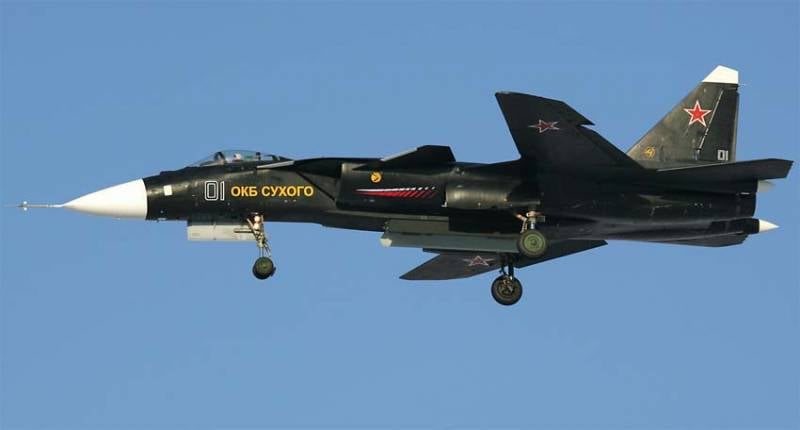 In some reports of past years, the possibility of replacing the D-30F6 with AL-41F engines with a controlled thrust vector was mentioned. The latter was originally developed for the MiG 1.44 fighter, but was not brought to the series. In this regard, there were suggestions about the possible use of such an engine in a promising project from Sukhoi.

The Golden Eagle did not receive engines with UVT, but this function was introduced on later fighters. At the same time, the AL-41F engine was again complete. On its basis, new products AL-41Ф1 and AL-41Ф1С were created, which are distinguished by high technical characteristics and having a number of characteristic features. AL-41F1 / C engines are used on two modern fighters - Su-35С and Su-57. They provide the equipment with both high flight performance and super maneuverability due to the shock wave.

Su-47 has never been demonstrated with any weapons. However, the general considerations of the designers in this context were clear. At the bottom of the fuselage was a large hatch of the internal cargo bay. Thus, the fighter could transport missile and bomb weapons inside the fuselage, improving aerodynamics and reducing visibility for the radar. 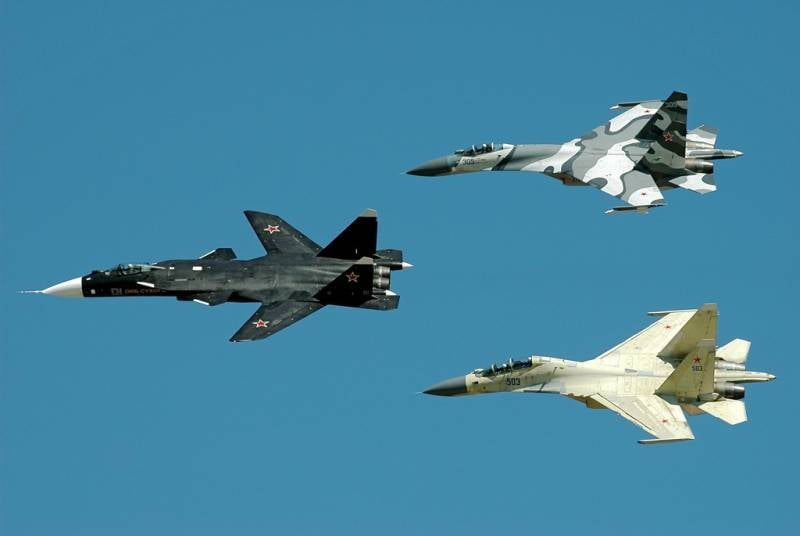 Developments of Sukhoi in flight, 2005. Photo by Wikimedia Commons

The latest Su-57 is also capable of transporting weapon in the internal compartments, which helps to protect them from radiation and thereby reduce the radar visibility of the aircraft. At the same time, it remains possible to install external pylons. It is noteworthy that the Su-47 and Su-57 are so far the only modern Russian front-line aircraft with internal combat load compartments.

Initially, the C-37 / Su-47 was a flying laboratory for testing the reverse sweep wing and related technologies. The project also introduced promising avionics components and other new products. As such, Berkut underwent comprehensive tests, the results of which determined the real prospects of all implemented innovations.

According to various sources, in the 2000s - after the tests were completed - the experienced Su-47 was involved in the PAK FA project. Certain positive qualities of this aircraft were useful in finding optimal solutions for the future fifth-generation fighter. "Golden eagle" again became a flying laboratory that solves scientific problems.

Despite all the expectations, forecasts and hopes, the S-37 / Su-47 "Golden Eagle" did not go into production and did not enter service. This car was left in a single copy, playing the role of an experimental sample. Nevertheless, and in this form, a unique aircraft fulfilled its tasks and contributed to the development of our combat aviation - important research and new technologies.