US Marines switch to the "Russian" cartridge 7,62 mm

3 September 2019
48
US Marines will soon have at their disposal the new semi-automatic sniper rifles M101A1, created as part of the CSASS (Compact Semi-Automatic Sniper System) program. These rifles were originally developed under the cartridge caliber 7,62-mm. Many American publications call the cartridge "Russian", although naturally we are talking about the standard NATO ammunition 7,62x51 mm. The Russian cartridge of caliber 7,62-mm is called for its strong connection with the AK-47 assault rifle, which is widely used throughout the world and is well known to the Americans. 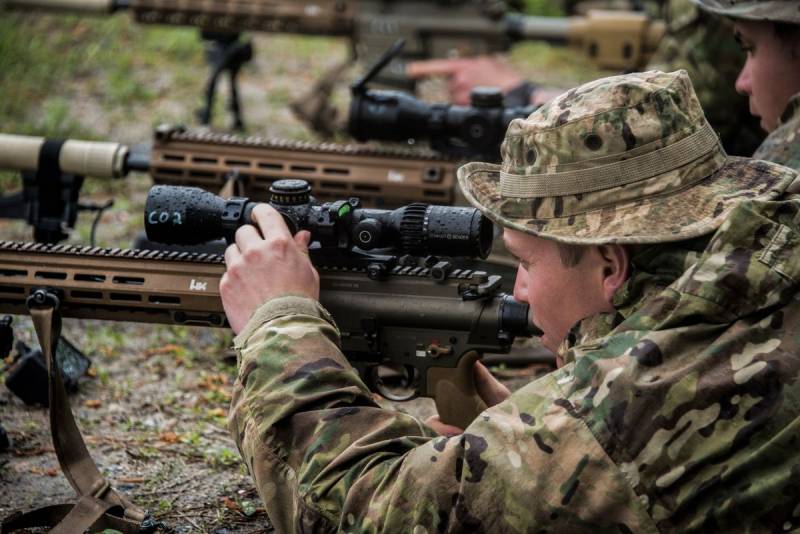 The US Marine Corps soldiers have rightfully managed to earn a reputation as well-aimed marksmen, they confirm their ability to shoot well since the creation of the corps in 1775. Specialists note that it is the marines' snipers that are best at mastering their skills, in comparison with other representatives of the American armed forces. It is for this reason that the decision of the Marine Corps to switch to the new compact semi-automatic sniper rifles M101A1 attracted great attention of military experts and journalists.

A new semi-automatic rifle with German roots, the world-famous German company Heckler & Koch was responsible for its creation, will replace the classic M110 sniper rifle. In turn, another Mk 13 Mod 7 sniper rifle will replace the M40 single-shot bolt-action rifle in the Marine Corps. This rifle will receive the new .300 Winchester Magnum cartridge, presented in the same 7,62 mm caliber, but with a 67 mm long sleeve, which makes the ammunition much more powerful. The initial flight speed of such a bullet exceeds 1000 m / s, and the effective aiming range is increased to 1200 meters. At the same time, the use of old 7,62-mm cartridges in the new CSASS semi-automatic sniper rifle caused some concern about the effectiveness of using this rifle as a sniper platform.

The new American M101A1 sniper rifle, which was created by the designers of Heckler & Koch, is distinguished by increased lethality precisely due to the use of 7,62 mm caliber cartridges. Such cartridges have a greater stopping effect in comparison with the traditional for small arms weapons US Army cartridge caliber 5,56 mm. In addition to the greater stopping power, the 7,62-mm cartridges are also distinguished by their better penetration ability, which becomes especially relevant in modern realities when the United States returns to the era of confrontation with large armies. A hypothetical military confrontation with China or Russia automatically suggests that soldiers in bulletproof vests with well-developed personal protective equipment will meet the Americans on the battlefield. Under these conditions, the old 7,62X51 NATO cartridge, which was adopted by the alliance countries in the 1954 year, becomes relevant again.

Today, cartridges of the 7,62 mm caliber, which have a high degree of kinetic effect on the enemy and have sufficient lethal force, are often associated in the USA with rifles in the style of the famous Soviet Kalashnikov assault rifle, the creator of which would have turned 100 years this year. Comparing the American AR-15 assault rifle and the Soviet AK-47 assault rifle, we can highlight several of the most noticeable differences between the two rifle systems. Since the American AR-15 rifle under the 5,56 mm caliber cartridge is a more accurate and light weapon (with the same number of rounds), AK, in turn, is traditionally famous for its reliability and great destructive force and stopping action of the 7,62 mm bullet, while losing weight and effective firing range.

Why do some experts oppose the 7,62 mm cartridge

Unlike modern more powerful cartridges, for example 7,62x67 mm, which is used in the new American high-precision sniper rifle Mk 13 Mod 7, classic 7,62 mm cartridges have good destructive power, but lose their effectiveness and accuracy at long distances, having less initial speed. Similar to the well-known and still widely used army Dragunov sniper rifle (the famous SVD), which fires similar ammunition - 7,62x54R, the American CSASS semi-automatic sniper rifle is limited to an effective firing range of 800 meters, which poses a real problem for Marine Corps snipers, who used to hit targets at a distance of more than 1000 meters. At the same time, the CSASS rifles, which are apparently an adaptation of the H&K G28 model to the requirements of the American military, have their obvious advantages. These rifles are lighter, and in their dimensions practically do not differ from traditional assault rifles. This not only does not distinguish the sniper from other fighters, but also makes it possible to effectively use the weapon in the conditions of modern fleeting combat, especially in urban areas. In addition, the weapon is more convenient when transporting soldiers with armored vehicles or vehicles.

At the same time, the 7,62x51 NATO cartridge exceeds the 5,56 mm cartridges in terms of the impact on the enemy, especially if the shooting is carried out on target in body armor. But the effective range of the CSASS system with such a cartridge is limited to 600 meters when shooting at a chest target and 800 meters when shooting at a growth target. In an interview with the American newspaper The Washington Post, one of the Marine Corps scouts noted: “It does not matter that you will be a more trained fighter if you are shot at a distance of a thousand yards, that is, before you can effectively shoot at the enemy yourself. What is the point of all training then? ”. True, the scout is clearly disingenuous, given that the new M110A1 semi-automatic rifle has its own quite obvious niche, the same as the Soviet / Russian SVD army rifle, while the marines will receive a standard "bolt" rifle Mk 13 to ensure truly high-precision shooting Mod 7, allowing you to reach targets at a distance of more than a kilometer. 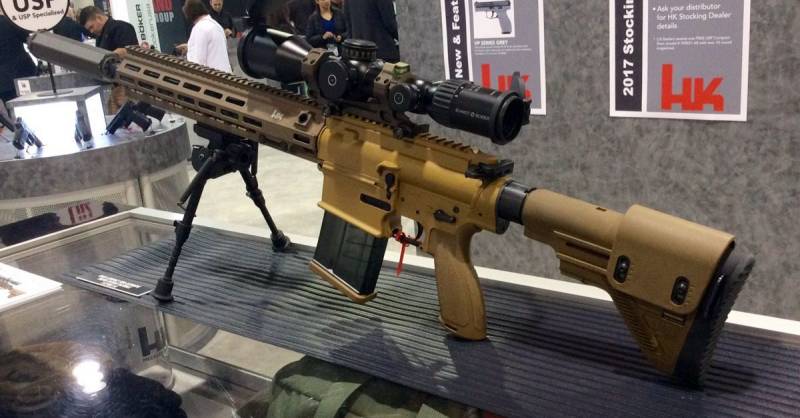 At the same time, for now, ordinary marines will continue to be armed with weapons chambered for 5,56 mm. This is a variant of the M27 automatic infantry rifle, which is also produced by Heckler & Koch. At the same time, it cannot be ruled out that in the near future the entire American army will switch to larger caliber ammunition. In particular, serious work is underway to introduce the 6,8 mm cartridge and develop new shooting systems in this caliber. In terms of their ballistic qualities, such ammunition will practically in no way be inferior to 7,62 mm cartridges, while remaining lighter, which is also of great importance for each individual soldier who carries pouches with additional magazines.

In general, it can be noted that the US military is moving towards a return to the old calibers and the creation of new ammunition with great power, great stopping power and greater penetration. The US Marine Corps, like all the country's armed forces, is being reorganized in preparation for possible military conflicts with an equal or close enemy. The creation of new cartridges and the appearance of rifles such as the M110A1 CSASS and the Mk 13 Mod 7 are an integral part of the efforts being made in this direction.