August 15 2019
100
One of the most daring projects in recent years in the field of space technology is developing, and there are reasons for good News. The other day it became known about the completion of the project "Creation of a transport and energy module based on a megawatt-class nuclear power plant." Now scientists have to carry out a series of subsequent work, and the end result will be the appearance of a full-fledged module, suitable for operation. 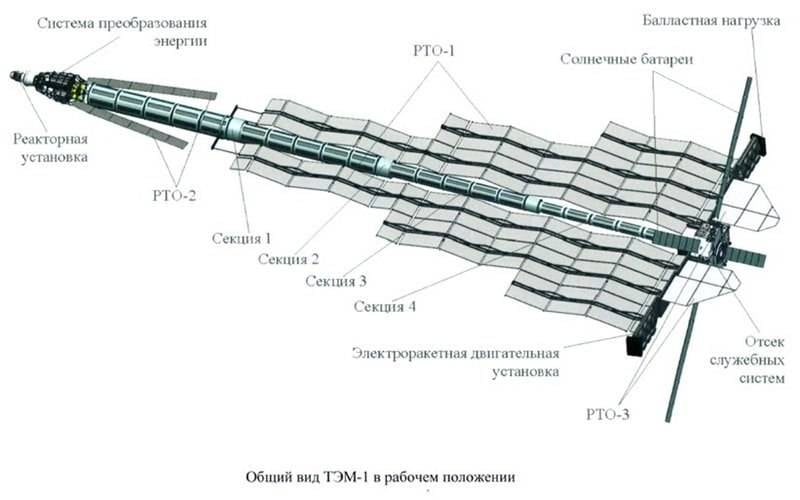 One of the layout options for the transport and energy module

At the end of July, Roscosmos approved the report for 2018, indicating the main activities and successes of the organization. Among other things, the report mentioned the project “Creation of a transport and energy module based on a megawatt-class nuclear propulsion system”, which was developed as part of the State program “Russian Space Activities for the 2013-2020 Years”.

According to the report, this project was completed last year. As part of these works, design documentation was prepared, individual products were manufactured and tested. While we are talking about the components of the future prototype of the ground-based prototype of the transport and energy module (TEM).

The work on creating a TEM does not stop there. All further activities will be carried out within the framework of the existing federal space program. Unfortunately, the Roskosmos report does not provide technical details of the TEM project in its current form, nor does it indicate the timing of the work. However, these data are known from other sources.

According to the report of Roscosmos, work on the topic of TEM is ongoing and should soon enter a new stage. This means that plans to create a fundamentally new rocket and space technology, approved almost 10 years ago, will be implemented in the foreseeable future.

The idea of ​​a transport and energy module based on a nuclear power plant (NED) in its current form was proposed in 2009. The development of this product was to be carried out by the enterprises of Roscosmos and Rosatom. The leading role in the project is played by the Energia Rocket and Space Corporation and the Keldysh Center FSUE.

In 2010, the project started, the first research and design work began. At that time, it was argued that the main components of nuclear power generation and TEM would be ready by the end of the decade. A preliminary design for the TEM was prepared in 2013. In 2014, tests of the components of the nuclear power ion-emitting diode and the ion engine ID-500 began. In the future, there were repeatedly reports of certain works and successes. Various elements of nuclear power generation and TEM were built and tested, and a search was made for areas of application of new technology.

As the TEM project was developed, open sources regularly published images showing the approximate appearance of this product. The last time such materials appeared in November last year. It is curious that this version of the appearance was noticeably different from the previous ones, although it had some similarities in the main features.

The transport and energy module is considered as a multi-purpose tool for working in space, both in the Earth’s orbits and on other trajectories. With its help, in the future it is planned to display the payload in orbits or send to other celestial bodies. TEM can also be used for servicing spacecraft or in the fight against space debris. 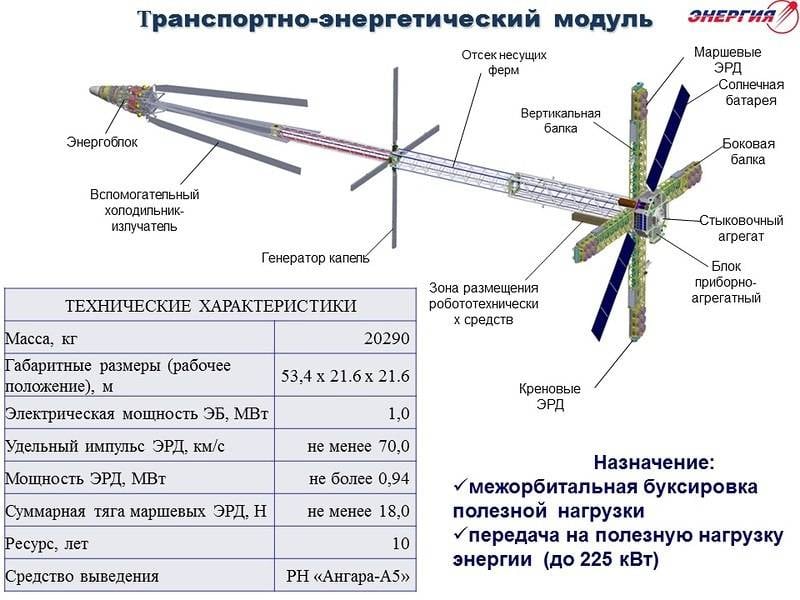 TEM will receive sliding load-bearing farms, due to which the necessary dimensions will be provided. On farms, it is proposed to mount a power unit with a reactor installation, an instrument-aggregate complex, docking facilities, solar panels, etc. In the tail of the module will be marching and shunting electric rocket engines. The payload will be transported using docking devices.

The main component of the TEM is the megawatt-class nuclear power generation system developed with 2009. The reactor of the installation must be particularly resistant to temperature loads, which is associated with its special operating conditions. A helium-xenon mixture was chosen as the heat carrier. Thermal power of the installation will reach 3,8 MW, electric - 1 MW. To drain excess heat, it is proposed to use a drip refrigerator-emitter.

Electricity from a nuclear installation must be supplied to an electric rocket engine. At the test stage is a promising ion engine ID-500. With an efficiency of up to 75%, it should show the power of 35 kW and thrust up to 750 mN. In tests in 2017, the ID-500 product worked at the 300 h bench at 35 kW.

According to the data of previous years, the TEM in the working position will have a length of more than 50-52 m with a diameter (for open trusses and elements on them) of more than 20 m. Mass - not less than 20 tons. The output of such a module into low Earth orbit will be carried out using one or several launch vehicles followed by assembly. Then the payload should dock with it. The estimated service life limited by the life of the reactor is 10 years.

The main feature of a TEM with a nuclear weapon, which fundamentally distinguishes it from other rocket and space technology, is the highest specific impulse. The use of a special power plant and an electric rocket engine allows you to obtain the required traction parameters with a minimum consumption of nuclear fuel. Thus, TEM in theory is able to solve problems inaccessible to traditional missile systems using chemical fuel.

This makes it possible to more actively use marching and shunting engines throughout the flight. In particular, this allows the use of more favorable flight paths to other celestial bodies. 10-year service life allows you to repeatedly use TEM in different missions, reducing the cost of organizing them. In general, the emergence of systems like TEM with nuclear power plants will give astronautics new opportunities in all major areas of activity.

TEM standard engines should use only part of the electricity from the generating systems. Accordingly, there remains a large supply of power suitable for use by the target equipment.

However, there are significant disadvantages. First of all, it is the need to develop a number of new technologies and the overall complexity of the project. As a result, the creation of a TEM requires a lot of time and adequate financing. Thus, the Roskosmos project has been under development for about 10 years, but the practical application of the finished TEM is still in the distant future. The total project cost is estimated at 17 billion rubles. 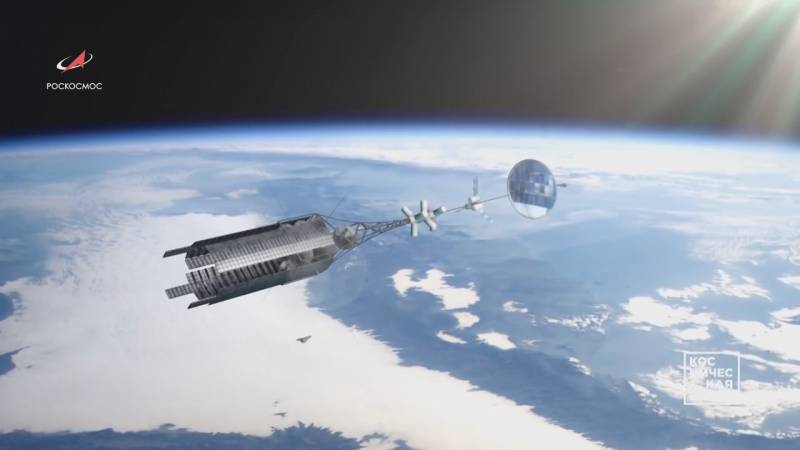 The use of a nuclear power plant leads to serious restrictions at different stages. For example, tests of a finished nuclear power reactor or TEM as a whole are possible only in orbits, which will minimize damage from possible emergency situations. The same applies to the operation of the finished transport and energy module.

According to the latest news, the development of the project “Creating a transport and energy module based on a megawatt-class nuclear power plant” has been successfully completed. Some prototypes necessary for testing are already ready. In the coming years, enterprises from Roskosmos and Rosatom will have to carry out a number of important works with these and other products.

The TEM flight prototype is planned to be built in 2022-23. After this, various tests should start, which will take several years. A full-fledged launch of TEM operation is expected in 2030.

At the end of June, it became known about the preparation of the site for the operation of the TEM. Such equipment will be launched from Vostochny Cosmodrome. Not so long ago, a competition was announced for the development and construction of a set of tools for the preparation of spacecraft and the transport and energy module. The design documentation for the technical complex should be developed in 2025-26. Construction is planned to be launched in 2027, and commissioning will take place in 2030. The contract value is 13,2 billion rubles.

Thus, various work on the topic of promising space rocket technology with nuclear weapons will continue throughout the next decade. Some organizations will have to complete the development and test the transport and energy module, while others will prepare the infrastructure for its operation. According to the results of all this work in 2030, the Russian space industry will have at its disposal a fundamentally new technology with wide capabilities. However, the complexity of all stages of a promising program can lead to a change in schedule.