Newcomer caliber 9 mm. "Alien" and a number of revolutionary solutions in the gun

24 2019 June
88
In the spring of 2019, the company from the Czech Republic “Laugo Arms” announced the release of a new model 9-mm pistol, which received the unusual name “Alien” (“Alien”). The gun chambered for 9x19 mm is distinguished by a number of revolutionary solutions aimed at improving the accuracy of shooting. The first mentions of the pistol and detailed materials about the new product appeared in the press back in 2018 year. It should be noted that the Czech company “Laugo Arms” is not a newcomer to the market for the development of small weapons. Previously, company representatives had a hand in creating the 9-mm submachine gun “Scorpion EVO 3”, the rights to manufacture of which were transferred to CZ (Česká Zbrojovka). 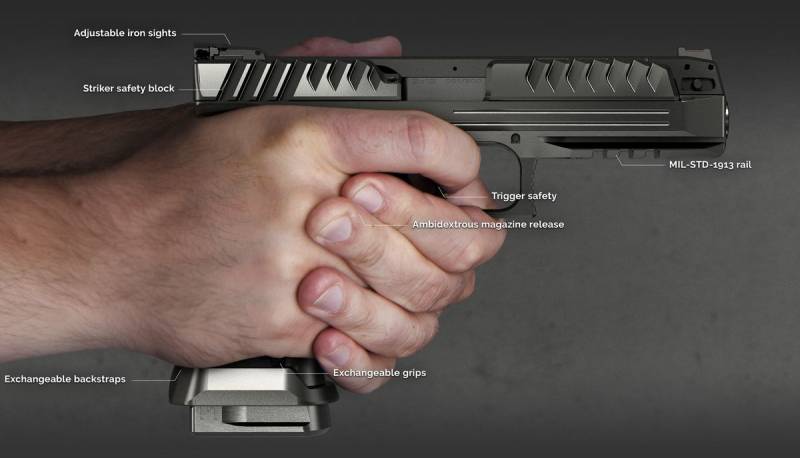 The main feature of the Czech gun is the unusually low placement of the barrel for such weapons, the barrel is not located in the casing but in the frame of the gun. This feature is explained by the fact that the autoloading pistol was originally designed as a weapon for the most accurate shooting, even at the highest rate. The unusually low and rigidly fixed barrel significantly reduces the throwing of the weapon after the shot. For this reason, the gun will be appreciated by all people who are fond of sport shooting.

The official presentation of the new Czech gunsmiths was held on 8 in March 2019 of the year as part of the international exhibition IWA 2019, which is traditionally held in Germany in the ancient city of Nuremberg. Initially, the gun was released in a very small batch consisting of just 500 copies, which received serial numbers from 001 / 500 to 500 / 500. Exclusivity, limited party and rich equipment predetermined the very high cost of a Laugo Arms Alien pistol, which is approximately 5 thousand dollars. In addition to the pistol itself, the scope of supply includes a bag and a holster, three magazines, a collimator sight, an aluminum mouth of the magazine receiver and two shutter-covers. One shutter-casing is designed for installation with mechanical sights, the second - use with a collimator sight. 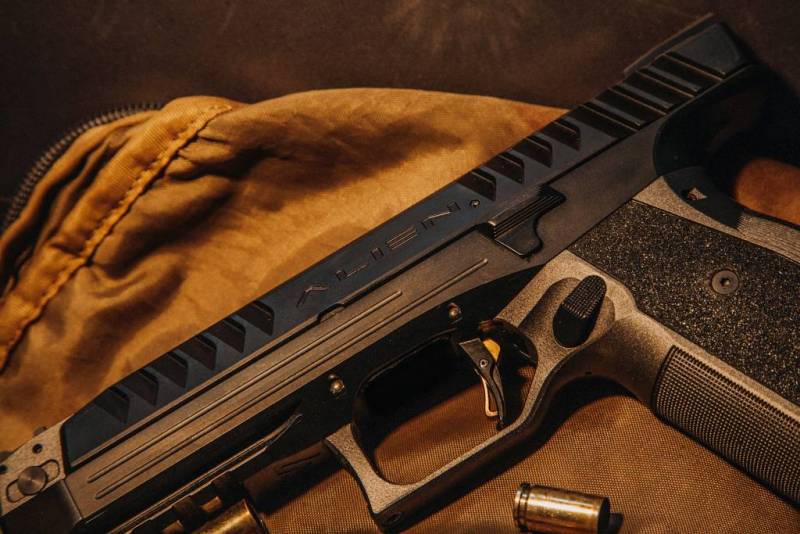 The full name of the company of the manufacturer of an alien pistol is Laugo Arms Czechoslovakia. The mention of the name of a non-existent country should not embarrass anyone, it is a conscious choice of the company's founders and a reference to stories her appearance. The designer of the new 9-mm self-loading Alien pistol was Jan Lucansky. Representatives of the arms market, he is known primarily as a man who created a good 9-mm submachine gun CZ Scorpion EVO 3. Work on the submachine gun Jan with his colleague began 15 years ago in Slovakia in the city of Trencin (for a long time the city had a different name - Laugaritsio), but the project was already completed in the Czech Republic, where the large weapon company CZ acquired all rights to the new submachine gun and brought it to the stage of mass production.

In 2013, Jan Lučanski left Česká Zbrojovka, leaving for “free swimming”. In its current form, a new arms company, known as Laugo Arms Czechoslovakia, was formed only in 2017 year, Prague became its place of deployment. The company itself is positioning itself as a manufacturer of premium firearms. In 2018, the company presented to the arms market its new project of a self-loading pistol for ultra-accurate shooting called Alien, which officially debuted at international exhibitions in the spring of 2019. It may be noted that the “Czechoslovak” name of the new weapons company reflects the cooperation of the two countries, which until January 1 1993 were a single state, and may also carry nostalgia notes that also attract potential buyers. 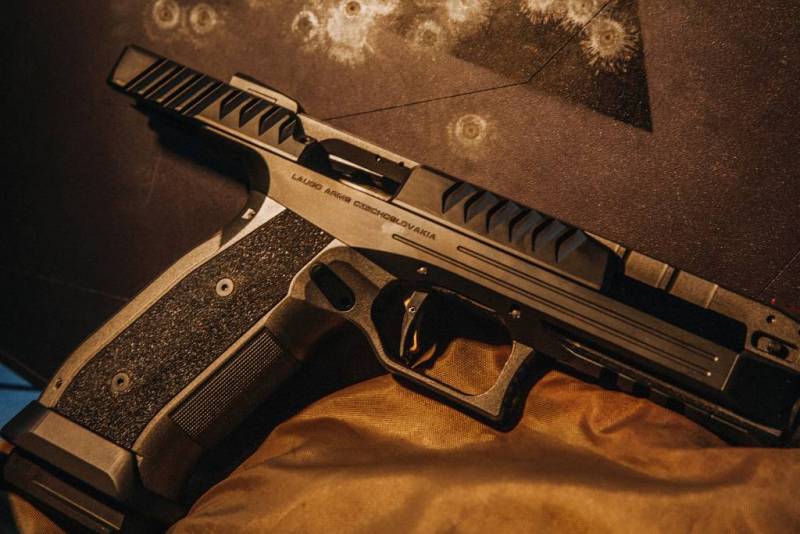 The main feature and feature of the Laugo Arms Alien pistol, which distinguishes it from the rest of the 9-mm self-loading pistols on the world market, is the sports format of the Czech model. The manufacturer claims "the lowest fit of the barrel axis" and is not cunning in this definition. The barrel of a pistol with a total length of 124 mm is fixed in a frame and is only 1,7 mm above the grip of an ordinary shooter, almost at the level of a bent index finger. Such a solution, which was implemented by the creators of the pistol, reduces the angle of tossing a weapon when firing. Thanks to this shooter, it is easier and more convenient to make new shots without spending a lot of time on it. According to experts and representatives of the specialized weapon-based media, who managed to test the model back in the 2018 year, the gun is indeed significantly less “goat” in comparison with similar models in the same caliber. You can notice this not only by feelings, but also visually on videos.

The barrel of a new Czech self-loading pistol is distinguished by the lowest position among all classmates, practically being a continuation of the hand arrow. In the basic version, the mass of a gun without a magazine and cartridges is 1009 grams, the mass of weapons with an empty magazine increases to 1120 grams. In this case, the gun is relatively compact. The total length of the model does not exceed 210 mm, height - 148 mm, width - 29 mm. The trigger force on the Laugo Arms Alien pistol can be adjusted from 1 to 2,5 kg. 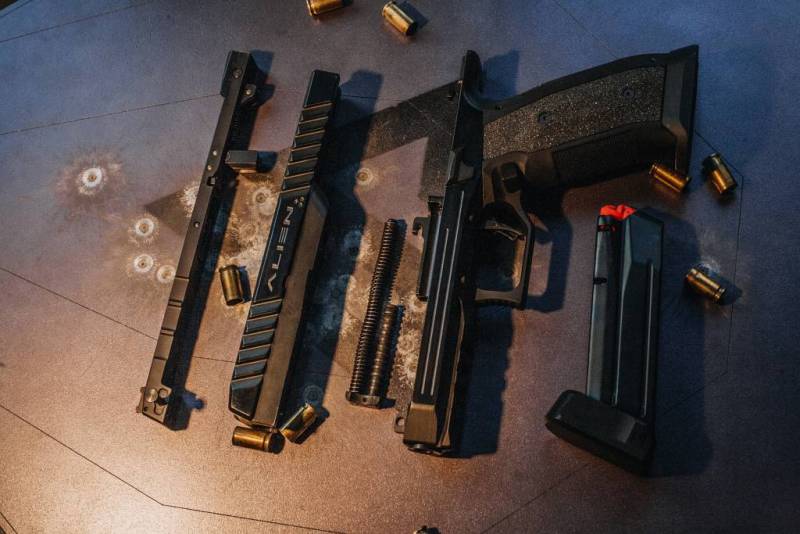 The developers themselves do not suffer from special modesty, therefore positioning their “newcomer” as a “semi-automatic revolutionary pistol, possessing a number of patented unique technical solutions”. For example, in the design of the model does not apply the outdated locking system or an ordinary trigger mechanism. The pistol is distinguished by the modular design, which allowed gunsmiths to divide the classical frame of the frame from the handle into two separate elements: the outer body module for the barrel and the handle with a trigger guard.

The manufacturer of the automatic operation system of the Alien pistol is declared as “gas-piston with a delayed semi-free gate”. At the same time, a small diameter vent hole - 1,6 mm - is located just 5 mm from the chamber. The retarder piston and the return mechanism stem are a single U-shaped assembly (the gas piston is on the right, the return piston is on the left), which is located above the barrel of the gun. 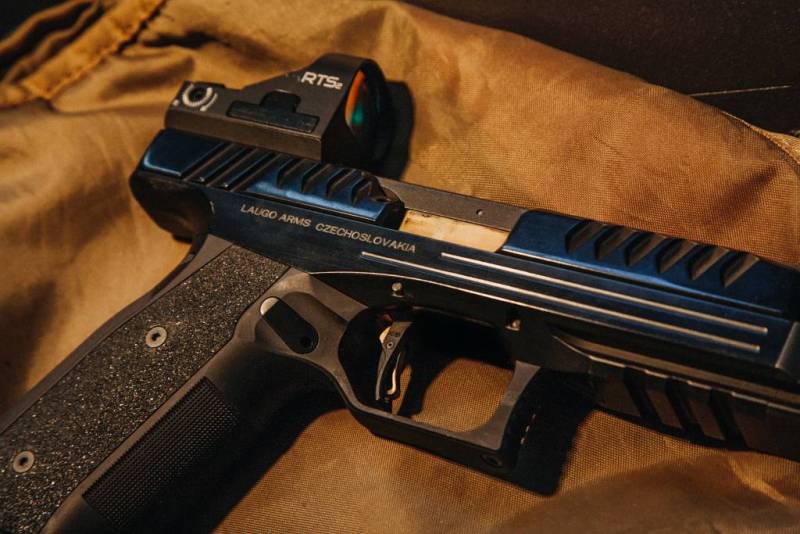 In the standard version, the pistol is equipped with mechanical sights, which consist of an adjustable rear sight and a fixed front sight, which received a red fiber optic indicator, which makes it possible to aim better with a lack of lighting. In this case, if necessary, the set of sighting equipment can be easily changed, mounting plates are optionally located on the top cover, which allow to install collimator or even optical sights. Also on the central frame of the barrel there is a Picatinny-type mounting plate integrated into the design of the pistol, which can be used to install a tactical body kit: a laser aiming device, a flashlight, or other devices that facilitate the life of the shooter.

An important feature of the model is that the sights are completely isolated from the shutter and remain motionless relative to the pistol frame at the time of the shot. Replacing the standard mechanical sight with a collimator is made by replacing the bar on which the trigger and sear are mounted. 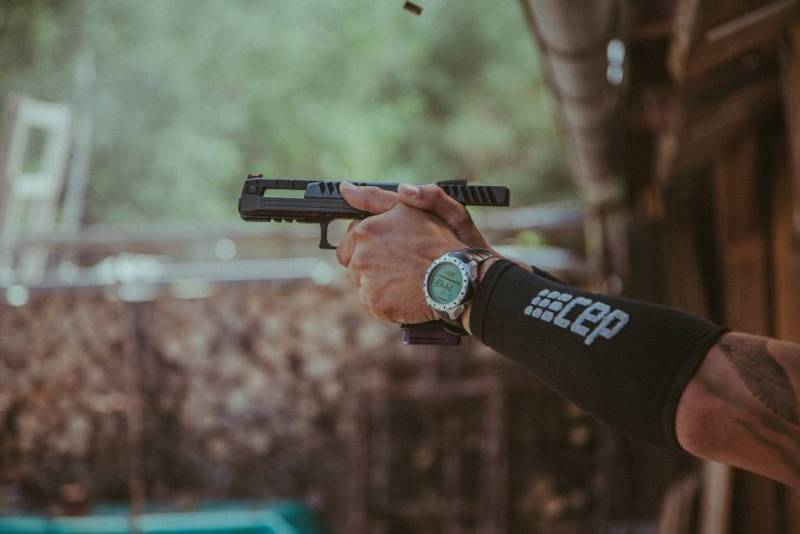