An-124 - the resumption of Ukrainian-Russian cooperation !? 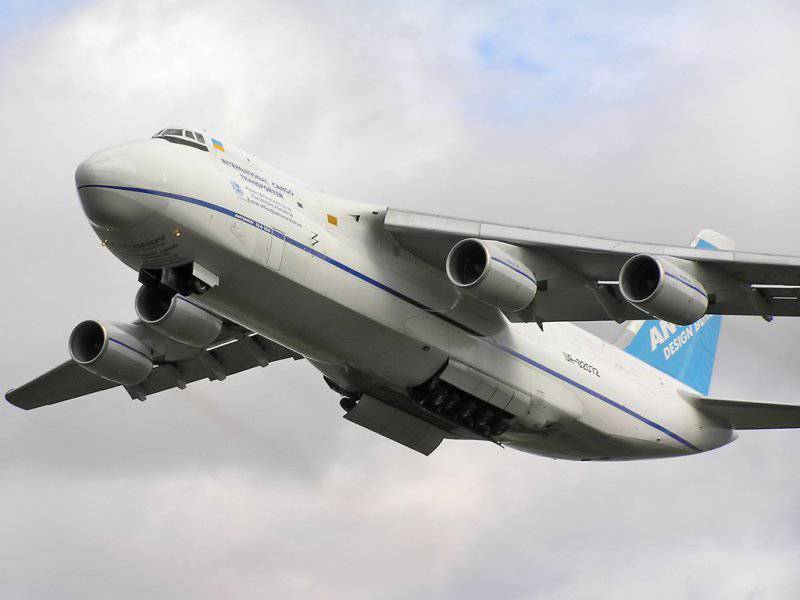 14 June 2012 of the year between Ukraine and Russia, a protocol was signed, according to which both parties intend to resume mass production of An-124 aircraft before the end of 2012. The signing of this document was the result of a ten-day meeting of the commission on Ukrainian-Russian cooperation, which is part of the Interstate Commission.

Dmitry Kolesnikov, who is the chairman of the state agency for managing state corporate rights and property, announced the plans of the two states.

It should be noted that the beginning of the summer of this year was already marked by the presence of certain prospects. So, the Ukrainian aviation industry, after long and difficult negotiations with Russian aircraft builders, reached certain agreements. At the same time, more or less clear answers were received to the most pressing questions regarding the An-70 (military transport aircraft), as well as on the An-124 (unique transport aircraft).

Interest in the joint construction of aircraft resumed almost a field of an entire year of calm. Back in the early spring of last year, the United Aircraft Corporation and the Antonov State Aircraft Concern signed an agreement on the sale and purchase of 50 percent of the authorized capital of UAC - Civil Aircraft, on the basis of which it was planned to create a joint venture UAC - Antonov over time. At that time, the deal was clearly political in nature, since the prime ministers of two states, N. Azarov and V. Putin, were present at its signing.

At first, the Russian side wanted to acquire 51 a percentage of the shares of the Ukrainian concern Antonov, which would make it possible to virtually completely control the intellectual property of the Ukrainian side. It is clear that many representatives of Ukraine did not arrange such an outcome of events, therefore, the parties did not succeed in reaching an agreement.

The next attempt was made in May 2011, when a group of KLA leaders headed by M. Pogosyan arrived in the Ukrainian capital. Then, according to unofficial information, a proposal was made to the management of the Ukrainian company regarding the transfer of a certain share of the capacity of the Voronezh and Ulyanovsk aircraft manufacturing plants to control the future joint venture. In exchange, the Antonov concern should have transferred the power and intellectual property of the design bureau to the control of the joint venture. However, such a proposal was extremely doubtful for the Ukrainian side, since the plant is a single whole, and it is not possible to divide and moreover transfer certain plants to the control of another enterprise.

And at the end of May this year, during a field meeting of the interstate commission, in which S. Naryshkin (speaker of the State Duma of Russia), V. Litvin (chairman of the Verkhovna Rada of Ukraine), as well as representatives of departments and ministries that are directly associated with aviation industry, it was decided to jointly produce the An-70 and An-124 Ruslan. Until 2030, it is planned to build 150 models of the first type and about 50 of the second.

According to the head of the United Aircraft Building Corporation M.Pogosyan, who spoke at the meeting, starting from now, and up to 2030, it is planned to send approximately 75 An-124 only for modernization and repair. Of these, about 40 percent belongs to the Russian military department. In addition, it is planned not only to carry out repair and modernization works, but also to resume the production of Ruslan - up to 2030, about 45-50 units. He also clarified that the main customers of the aircraft are the Ukrainian and Russian military ministries.

But these are far-reaching plans. As for the closer prospects, then, according to Lieutenant-General V.Kachalkin, commander of the Russian military transport aviation, during 2014-2020 the Russian side should receive 60 military-transport An-70. This year it is planned to complete the research and experimental design. Thus, a new tactical-operational aircraft will be created, which will be designed to perform military tasks. Regarding An-124, it is predicted that 2020 units of various modifications of this model will be obtained by 25.

Such statements are heavy. Recall that the project regarding the production of An-124 was resumed in 2009 year. In this process, D. Medvedev played an active role, who then held the post of head of state, and who instructed the government to contribute to the state armaments program the purchase of 20 Ruslan. At about the same time, a statement was made that it was planned to resume the production of these cargo aircraft, which, by the way, are the largest vehicles of this class. In addition to military interest, the interests of civilian carriers, who have declared their desire to purchase 60 An-124, will also be taken into account.

After the meeting, Russian experts said that the majority of potential customers are waiting for a clear response from the Russian military department regarding An-124. And the decision to resume the joint Ukrainian-Russian production Ruslan is really a principled state position, expressed besides quantitatively. The main condition that was set by the Russian United Aircraft Corporation was that a contract with the military should be made for a relatively large batch of aircraft, because according to the project, with an increase in payload to 150 tons, the profitability of the development of the Ruslan can be achieved with minimum order in 40 machines. Thus, if we are talking about 50 An-124, then this is quite a satisfactory figure.

If we talk about An-70, then the solution of issues has come to the final stage. As you know, even in 2006, the implementation of this project was threatened with termination, since V. Mikhailov, being at that time commander-in-chief of the Russian air force, stated that the army does not need such a model of cargo transport plane, and that it is preferable for her use of modernized IL-76. At this point in time, these statements are recognized as erroneous, and the Russian-Ukrainian program for the joint production of An-70 received further development.

It is necessary to note the fact that the Russian side is extremely interested in the development of its military transport aviation. This is evidenced by the statements of D. Rogozin, made by him in the late spring of this year that the production of military transport vehicles will be separated into a separate system, which will be engaged in the production of almost all transport aircraft models, including the An-70 and An- 124. The only exception is IL-96.

Recall, until recently, the United Aircraft Building Corporation had four structures for the production of aircraft, depending on the purpose. At the same time, most of the revenue went to military aviation (80 percent). Approximately 15 percent was received by civil aviation, 5 percent of profit accounted for approximately in equal shares on special and transport aviation.

The fact that the structure of the UAC was not provided for the structure of military transport aviation, is understandable, since over the past year only two IL-76 was put into operation. But after signing the protocol, the situation is predicted to change radically. In addition to IL-76, An-124 will be produced in Ulyanovsk, and An-70 in Voronezh.

It should be noted that there are already certain changes in both projects. So, in June 2012 of the year, a number of the most pressing issues regarding the resumption of joint production have already been scheduled.

If we talk about projects in general, it is obvious that the scheme of their implementation is exactly the same as it was proposed several years ago. In Ukraine, a small part of the aircraft will be produced for joint projects, as well as components for modernized machines, all the main production will be carried out in Russia. Thus, the Ukrainian Motor Sich will produce D-27 engines for An-70, which, starting from 2013, will be produced 12 units. Gradually, the pace will increase.

In addition, the D-18T engines, which are used in the An-124, will be produced at the same plant.

Thus, a simple conclusion suggests itself, the most promising joint Ukrainian-Russian projects with respect to military transport aviation are more profitable for the Russian Ministry of Defense, since the Ukrainian side needs a very small proportion of aircraft vehicles. But at the same time, there is a real opportunity over time to enter the Asian market and receive significant profits, since the level of purchases of military equipment there is developing much faster.

But while the project exists only on paper. And it will remain there until the parties can agree on production and financial differences. Otherwise, the real union and the creation of a joint Ukrainian-Russian aircraft building enterprise will remain only a dream. And no meetings will be able to solve any commissions.