26 2012 June
12
During the Second World War, there was a constant increase in caliber tank guns. All this led to the final formation of the appearance of a heavy tank. An example of this trend is the post-war T-10, which was equipped with a 122mm 2A17 cannon. This tank turned out to be the last Russian armored vehicle of its class. At the time when the T-10 was being mastered by the troops, Soviet tank builders were working at full speed on installing "serious caliber" guns on medium tanks. This ultimately led to the emergence of a new class - the main battle tank. The first domestic machine, which belongs to this class, the T-64A, received a smoothbore gun 2A26 of 125 mm caliber, thus surpassing the T-10 heavy tank in terms of firepower. Since then, in the domestic tank industry for some time there have been no breakthroughs in terms of weapons, or rather, its "iron" part.

In the second half of the eighties, the topic of increasing the firepower of tanks became again relevant. It is this fact that caused the start of work on the 292 Object project. The development of the new tank was entrusted to the designers of the Leningrad Kirov Plant and the VNII Transmash. N.S. Popov. In the early stages of the project, employees of the design bureau and the All-Union Scientific Research Institute worked out the theoretical part of the new weaponry. According to the calculations at that time, the tank could not have a gun of a caliber larger than 140 millimeters. This conditional boundary of the possible was determined by the technological and strength nuances of the production and operation of the gun barrel. When the caliber in 140 was exceeded, the “vitality-power” balance began to move away from the vitality. In addition, the production of such a gun according to existing technologies did not allow for adequate resources - plastic deformations had an effect. Nevertheless, the engineers again recalculated all the parameters of the necessary gun, picked up the necessary sorts of metal and began work on the creation of an experimental tool.

First decided on the caliber. An 152,4 millimeter has been selected. Of all mastered in production, he was optimal in terms of the ratio of power, power, size and weight of the instrument. However, it took some time to argue about the type of gun. First won supporters rifled guns. Arguments about the unification of ammunition with other types of equipment, the development of similar barrels in production, etc. were cited in favor of the barrel with rifling. The management of the Kirov plant has already agreed to develop an 152-mm rifled tank gun with the head of the Petrel Research Institute, but ... This was the end of 80's and the designers were unable to beat out the funding for the development of two guns at once. Therefore, the development of a rifled gun was never launched, and the "292 Object" now had to get a smooth-bore gun. Fortunately, his development had to start before the deterioration of the financial situation. 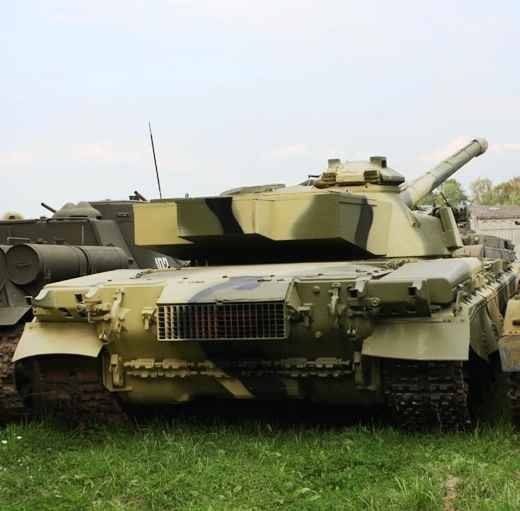 While some designers worked on a large-caliber instrument, others were engaged in its "carrier". The basis for the tank “Object 292” was taken as a serial tank T-80U. All units except the tower remained unchanged. The tower, in turn, had to be redone. The fact is that a larger-caliber gun had corresponding dimensions and, as a result, simply did not fit in the original combat compartment. I had to slightly increase the height of the tower and change its shape in the plan. In addition, significantly repacked the placement of ammunition. She was transferred to a special armor mounted in the back of the tower. In the upper armored panel of the new installation, rectangular plates were placed, fixed in such a way that during the detonation of the ammunition set, a blast wave, hot gases and fragments would go up beyond the limits of the habitable volume. Obviously, an armored door was also provided, covering the crew from a potential threat, but there is no exact information about this. The separate loading shots were fed into the gun with the help of an automatic loader. In view of the new arrangement of the installation, it was necessary to change its design. The final dimensions of the 152-mm smoothbore gun, fortunately, turned out to be slightly more than the 125-mm tank guns and most of the innovations in the design of the tower were nevertheless associated with the new location of the ammunition stack. The new turret with a larger gun was fully compatible with the “seat” of the T-80 tanks of all modifications. It was expected that in the future this fact will help relatively small forces to modernize the existing equipment with a significant increase in its combat performance.

The construction of the experimental “292 Object” was completed in September 1990. An experienced car from the old chassis and the new tower looked both familiar and unusual at the same time. In 1991, test firing was launched at the Rzhevsky range. Documents regarding their progress have not yet been published, but according to the project participants it is known that there were no particular problems with the new gun. Effective recoil devices coped well with their task and sufficiently reduced the shift of the gun when fired. In addition, during testing, it was found that the 152-mm cannon suspension system ensures compliance with all regulations regarding the loads on the crew during combat work.

The 292 Object project naturally had some drawbacks. They are called “childhood diseases” and the presence of these surprises no one. Any project is “ill” with them, but they can all be eliminated in the process of finishing the design. However, the yard was the beginning of the nineties. Our country was no longer up to the new tanks. And without that little funding is constantly cut, until the topic "Object 292" was closed. It was built only one copy of a promising combat vehicle, which today is stored in the armored museum of the city of Kubinka.