Cosmonautics Day. Our country is a space power, and we should be proud of it!

April 12 2019
61
Cosmonautics Day is celebrated in Russia on April 12, and the whole world is International Day aviation and astronautics. This holiday is timed to the first date of manned space flight. 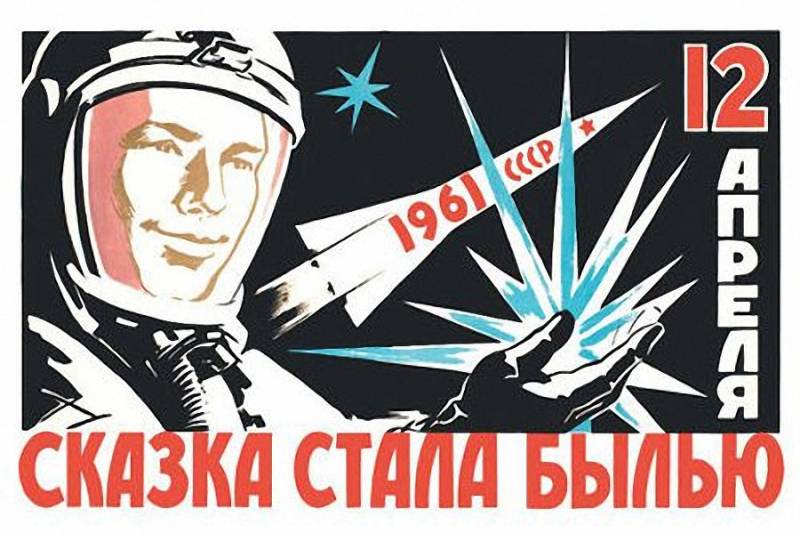 As is well known, the first person to fly into space was the Soviet cosmonaut Yuri Alekseevich Gagarin. Almost sixty years have passed since then, but Russia remains one of the world leaders in the field of space exploration. And that is why the Day of Cosmonautics in our country may well be considered not a narrow professional, but a national holiday.

12 April 1961, the first lieutenant Yuri Gagarin on the spacecraft "Vostok-1" for the first time in the world stories circled the Earth in orbit. Thus began the era of active space exploration through manned space flight. Yuri Gagarin received worldwide fame, and in his homeland his merits were marked by the Golden Star of the Hero of the Soviet Union and the rank of major early.

In the Soviet Union they prepared very carefully for sending a man into space. The choice of candidates for cosmonauts was held under the personal control of the chief designer of the Special Design Bureau No. 1 of the State Committee of the Council of Ministers of the USSR on defense technology, Sergei Pavlovich Korolev. Korolev was convinced that a professional military fighter jet fighter pilot should fly into space. There were also criteria for age, external data, health. It goes without saying that health should have been perfect, age should be about thirty years old, height no more than 170 cm, weight up to 68-70 kg. In the cosmonaut detachment, in which specialists were trained to go into space, two potential candidates immediately emerged. 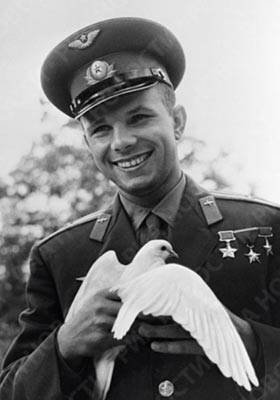 Senior Lieutenant Yuri Alekseevich Gagarin was 27 years old. A native of a peasant family, he graduated from the first military aviation school for pilots named after K. E. Voroshilov in Chkalov (now Orenburg), served in naval aviation, in the 1th fighter aviation regiment of the 769nd fighter aviation division of the Northern Air Force fleet. By the end of 1959, Senior Lieutenant Gagarin flew 265 hours, had the qualification of a military pilot of the 3rd class.

The understudy of Yuri Gagarin, German Stepanovich Titov, also wearing shoulder straps of a senior lieutenant, was a little younger than Gagarin - he was 25 years old. After conscription, he graduated from the 9-th Military Aviation Pilot School in Kustanai and the Stalingrad Military Aviation Pilot School. Red Banner of the Stalingrad proletariat in Novosibirsk, after which he served in the 26 Guards Aviation Regiment of the Air Force of the Leningrad Military District.

In addition to Gagarin and Titov, Grigory Nelyubov, Andrian Nikolayev, Pavel Popovich and Valery Bykovsky were also credited to the first six Soviet cosmonauts. All of them were pilots of the Air Force and Aviation of the Navy of the USSR, they were distinguished by excellent health, high-quality training and, last but not least, purposefulness and a sincere desire to fly into space. In the end, the leadership was inclined to choose Yuri Gagarin as the first person whom the Soviet Union would send into space. Of course, the natural charisma of the young officer played his role, his famous “Gagarin” smile, and “simple” origin - Gagarin ideally suited the role of the first cosmonaut.

25 January 1961, the Commander-in-Chief of the USSR Air Force, ordered all six members of the group to be recruited as Air Force cosmonauts. 23 March 1961 was appointed Yuri Gagarin as the commander of the cosmonaut corps. This appointment alone testified to the trust that the command had for the young senior lieutenant. Indeed, older officers also came under Gagarin’s subordination - if Gagarin was 1934 of birth, then Andrian Nikolayev was of 1929 of birth, and Pavel Popovich was of 1930 of birth.

The accelerated pace of the organization of the first flight into space was explained by the fact that Sergei Korolev was very worried about whether the Americans would fly before us. At the disposal of the Queen was information that the US is preparing to launch a man into space on 20 on April 1961 of the year. Therefore, it was decided to assign the start of the Soviet spacecraft to the second decade of April - between 11 and 17 in April of 1961. At the meeting of the State Commission, Gagarin’s candidacy was approved, and Titov was appointed his alternate.

Five days later, on April 8, 1961, at the closed meeting of the State Commission on the Launch of the Vostok spacecraft, chaired by Konstantin Rudnev, head of the State Committee of the Council of Ministers of the USSR on defense technology, the first space mission in the history of mankind was approved.

The assignment signed by Sergey Korolev and the head of the department for the preparation and support of space flights of the Air Force General Staff Lieutenant-General Nikolai Kamanin emphasized:

Perform a single-turn flight around the Earth at an altitude of 180 — 230 kilometers, a duration of 1 an hour of 30 minutes, landing in a given area. The purpose of the flight is to check the ability of a person to stay in space on a specially equipped ship, check the ship’s equipment in flight, check the ship’s connection with the Earth, make sure that the ship’s landing facilities and the cosmonaut are reliable.

At the meeting of the commission, a final decision was made to send Senior Lieutenant Yuri Alekseevich Gagarin to space.

The flight of Yuri Gagarin opened the era of space exploration through human participation in space flights. But the first flight into space had a political significance - sending the first cosmonaut, the Soviet Union demonstrated to the world that it can, firstly, compete with the United States on an equal footing and in many ways surpass them, and secondly, the USSR is the flagship world scientific and technological progress and uses its intellectual and technical potential in the interests of mankind.

The Vostok-1 spacecraft with cosmonaut Yuri Gagarin on board launched from the Baikonur cosmodrome 12 on April 1961 in 09: 07 Moscow time. The direct command of the launch team was carried out by the lieutenant colonel of the missile forces Anatoly Semyonovich Kirillov. It was he who gave the command on the stages of launching the rocket and watched it through the periscope from the command bunker. 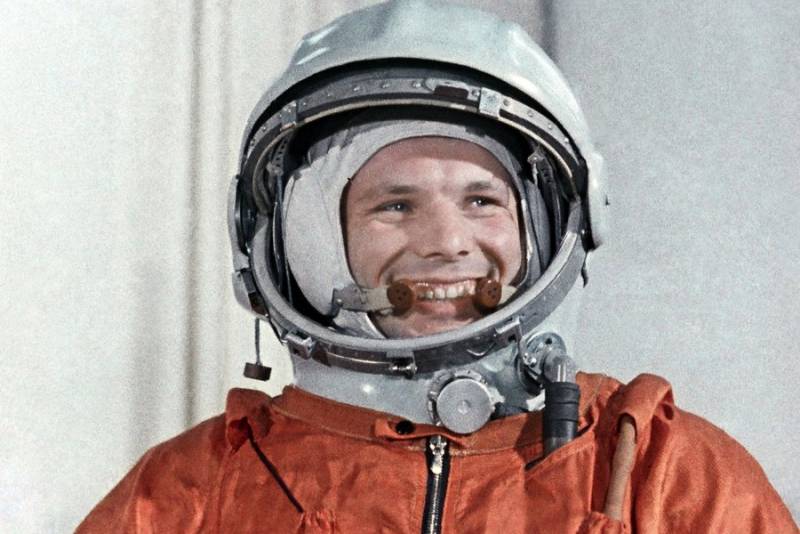 At the very beginning of the rocket lift, Yuri Gagarin exclaimed: “Let's go!”. These words of the first Soviet cosmonaut became a peculiar motto of the new era in the history of mankind - the era of space exploration. The origin of this phrase, of course, subsequently interested historians. It turned out that the test pilot Mark Lazarevich Gallai, who was an instructor in the first cosmonaut detachment, preferred to say "Let's go!" He believed that such an informal style more favorably affects the psychological comfort of astronauts. Gallay himself later recalled that such a phrase was very common among test pilots, from where he migrated to the cosmonaut detachment. 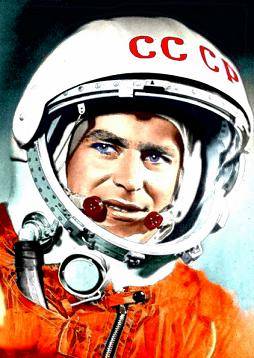 When Korolev made the decision to launch a man into space as soon as possible out of fears that the Americans might outstrip us, he was absolutely right - the Americans were literally on his heels. 12 April Yuri Gagarin flew into space, and already 5 in May, less than a month later, the Americans launched astronaut Alan Shepard into space. 21 July 1961 was flown into space by another American - Virgil Grissom. On its flight, the Soviet Union responded by launching into space the second Soviet cosmonaut - 6 August 1961, on the Vostok-2 spacecraft, German Titov went into space.

In 1962, the Soviet Union sent two more astronauts into space - 11 of August flew Andrian Nikolayev, and on August 12 flew Pavel Popovich. 14 June 1963 of the year Valery Bykovsky went to space, and 16 June 1963 of the year for the first time in world history a cosmonaut Valentina Vladimirovna Tereshkova flew into space. It was another large-scale experiment - after successful launches of Gagarin, Titov, Nikolaev, Popovich and Bykovsky, Sergey Korolev decided to send a woman into space to emphasize once again the equality of the sexes in the Soviet Union and set the world record again. The choice fell on Valentine Tereshkova.

Unlike the first five cosmonauts who were personnel officers of naval aviation and the air force, Valentina Tereshkova had nothing to do with the armed forces. She was the most ordinary worker of a textile factory, shortly before being admitted to the cosmonaut corps who had completed a correspondence college of light industry. 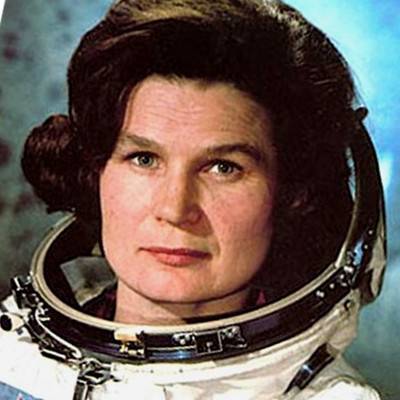 However, since 1959, Tereshkova was engaged in parachuting at the Yaroslavl flying club and performed 90 skydiving. When they began to select the candidacy of a female cosmonaut, the choice fell on 26-year-old Valentina Tereshkova. Together with other women candidates she was enrolled in the cosmonaut corps and received the rank of private armed forces. 15 December 1962 was awarded the rank of junior lieutenant, 16 June 1963 of the year - Lieutenant and on the same day - captain, and 9 January 1965 of the year 27-year-old Tereshkova already wore a Major's shoulder straps.

In 1964, the Soviet Union set new records again. First, October 12 1964, the multi-seat spacecraft first entered space. Vladimir Mikhailovich Komarov, Konstantin Petrovich Feoktistov and Boris Borisovich Egorov flew on it. Secondly, in the flight on a multi-ship, civilian specialists first participated. Of the three cosmonauts only Vladimir Mikhailovich Komarov was a regular soldier. 37-year-old engineer-lieutenant colonel Komarov aviation on the day of the flight received the following military rank of colonel engineer. He was a graduate of the Bataysk Military Aviation School. K.A. Serov and 1-th faculty of aviation weapons of the Air Force Academy. NOT. Zhukovsky, served in the Research Institute of the Air Force as assistant chief engineer and tester of the 3 department of the 5 department engaged in testing new types of aircraft.

Doctor Boris Borisovich Egorov was 26 years old, at the time of the flight he had the military rank of captain of the medical service, he graduated from the medical faculty of the 1 of the Moscow Order of Lenin Medical Institute. I.M. Sechenov. Konstantin Petrovich Feoktistov, 38-year-old design engineer, worked together with Sergei Korolev, was a civilian, although his whole life was associated with developments in the field of rocket production.

18 March 1965-year-old aviation lieutenant colonel Pavel Ivanovich Belyaev (the rank of colonel was assigned on the flight day) —After the Air Force’s fighter aircraft; in fighter aircraft. For the first time in the history of world space exploration, Alexey Arkhipovich Leonov went out into outer space. Thus, the Soviet Union did not stop making records in the field of astronautics. 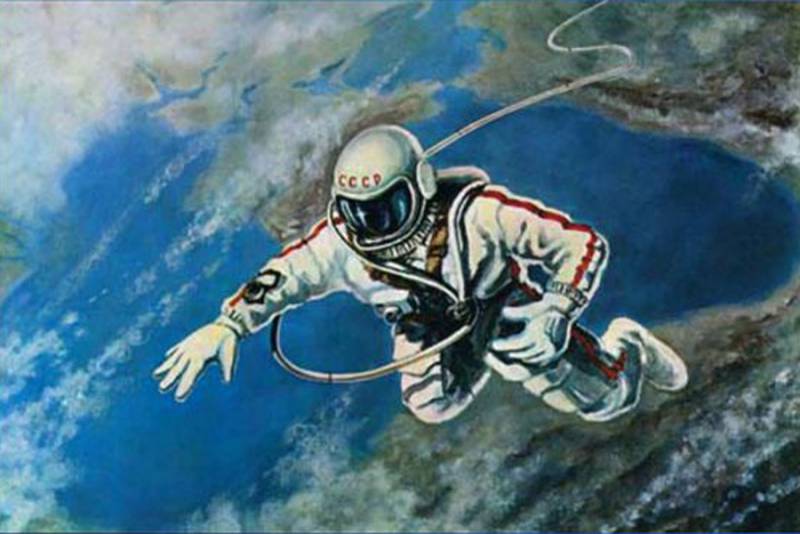 For many decades, the space industry has received in our country all-round development. A lot of discoveries and records were made and delivered by Soviet and then Russian cosmonauts. The cosmonaut's profession was perhaps the most prestigious in the Soviet Union, hundreds of thousands of Soviet boys dreamed of space, for many it was Gagarin’s example that determined the course of life, prompting them to enroll in flight and aviation engineering schools.

Today, space exploration has acquired a new meaning. The times of confrontation between the great powers are back, only today the competition between them is unfolding not only on land and at sea, but also in space. It is not by chance that the US is actively developing space forces, and American statesmen are not tired of talking about the imaginary "space danger" on the part of Russia and China. Space exploration, development of cosmonautics is the most important condition not only for preserving parity between opposing powers, but also a step towards the probable use in the future of the resources and opportunities possessed by space.

"Military Review" congratulates all those involved in the space program, the space industry and weapons, as well as all readers, all citizens of our space power, with this significant holiday - Cosmonautics Day.

We are in Yandex Zen
State and private space: Russia's competitive opportunities
Space systems of the US military communications: analysis of the state and development
61 comment
Information
Dear reader, to leave comments on the publication, you must to register.