16 May 2018
115
Fighter Non-162 Salamander (Salamander) today causes many people to respect the incredible efforts that made the German aircraft industry in a rather scary for her conditions of the end of the Second World War. In total, 69 days separated the start of the construction of the Non-162 fighter from the flight of the first prototype of the machine, which took place in December 1944. Designed as a turbojet interceptor fighter the aircraft was built using wood - to reduce the cost and facilitate production. Now it is impossible to believe, but the German industry was going to build up to 4000 data planes per month. Naturally, these figures were utopian.


History the creation of this fighter, probably, is the most exciting among all ever created combat aircraft. The idea of ​​building the so-called "Folksgerer" - "people's fighter" was born in the mind of the chief of the specially created "fighter headquarters" Otto Zaur, who was the protégé of the German Minister of Arms Albert Speer. From the appearance of the idea to the construction of the first plane, it took just 90 days! The idea of ​​a "national fighter" envisaged the development of a cheap, simple fighter, which would be suitable for mass production using low-skilled labor and cheap materials.

The reason for the birth of this idea was the weakness of the German air defense system, which by the autumn of 1944 had already become obvious enough for the leadership of the Third Reich. Bearing this in mind, the Ministry aviation Germany accepted the idea of ​​holding a competition for the development of a jet fighter, which was supposed to be produced in sufficiently large volumes - from 1000 to 5000 fighters per month. Competitive conditions were sent to all the major aircraft manufacturing companies in the country and contained a list of the following tactical and technical requirements for the future aircraft: 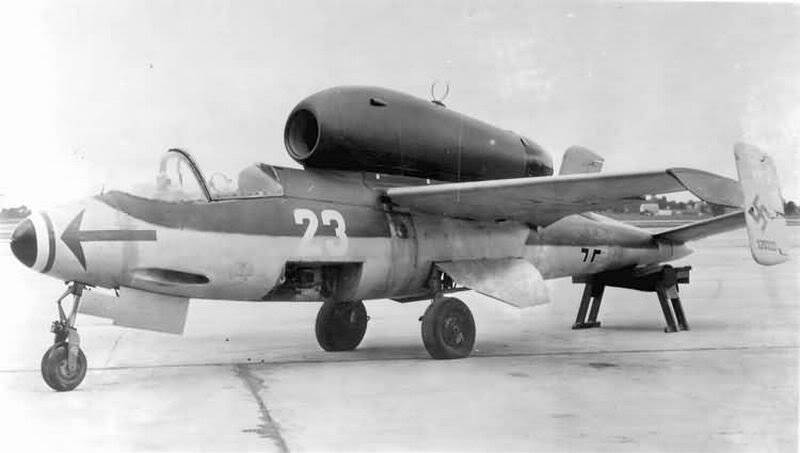 In addition, among the requirements indicated simplicity of the machine equipment and cheaper production, ease of piloting. It was also interesting that the tree was decided to use in the design of the wings.

Heinkel received all the necessary 8 September 1944 documents for this competition, and already on September 24, the company’s design team based in Vienna began to design the future fighter, which received the designation Non-162 and the factory designation “Salamander”. By the beginning of November, they had prepared the working drawings of the machine, while as the drawings were ready, the production of separate units and fighter units was carried out. All this made it possible to finish work on the interceptor fighter already by 6 December 1944. On the same day, the first Non-162 took off.

Heinkel He-162 was a single-engine single-seat fighter equipped with a turbojet engine. It was a high-profile mixed design with spaced vertical tail and tricycle landing gear, the front pillar of which was manageable.

The front of the fuselage to the wing was detachable monocoque type, the rest of the half-monocoque. The design was mainly metal, with the chassis compartment flaps, nose fairing, battery compartment cover, weapon hatches, and the inside walls of the fuselage fuel tank compartment made of wood. Above behind the cockpit mounted wing, and above it was installed engine nacelle. The aircraft differed unusual top engine. The turbojet engine was attached to the front of the fuselage with 2-me in the front with vertical bolts, and 2-me with horizontal bolts in the back. 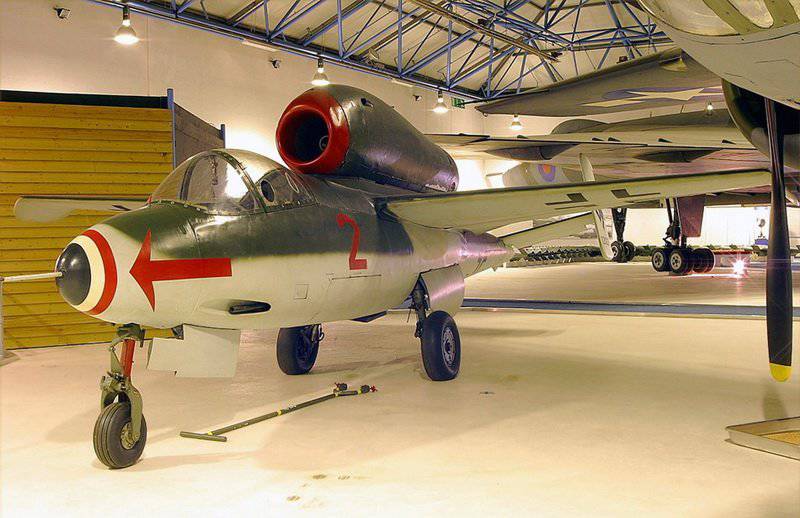 The wing of the plane was wooden. It was one-piece, trapezoidal and two-spar. Its working sheathing was 4-5 mm thick. and was plywood. Duralumin was only wing tips, which deviated downward at an angle of 55 degrees. The wing was attached to the fuselage of the fighter using 4 bolts. Between the wing spars were located 2 small fuel tank. The flaps and ailerons were also wooden. The flap drive was hydraulic, and the aileron was mechanical.

The landing gear was three-post, retractable. The front landing gear in the retracted position was in a special niche, located under the dashboard. The size of the front wheel was 380 on the 150 mm., Buna or Continental tires were used on the front pillar. The main landing gear were a cantilever type and were fastened to the fuselage of the car and retract into it back against the direction of flight. The wheels of the main chassis were 660 size on 190 mm. The landing gear drive was hydraulic, and their release was a mechanical spring drive. Chassis cushioning was oil. The chassis was equipped with drum brakes. The doors of the chassis niches were also made of wood, but were reinforced with duralumin elements.

The cockpit canopy was made of Plexiglas and was two-piece. The back of the lamp was folded back and upwards; in the open position, it could be fixed with the aid of a stop and a lock. On the left side in the cockpit lantern there was a glazed round ventilation vent. The cockpit was not sealed. A collimator sight of two types of Revi 16A or Revi 16B was mounted in the cab, which was mounted on a special bracket mounted above the dashboard. Navigation instruments, engine controls, radio equipment were placed on the dashboard and partly on the side consoles. The pilot's seat on this fighter was catapulted, was adapted for laying a parachute and used a powder charge. Immediately behind the pilot's seat was an armored plate. 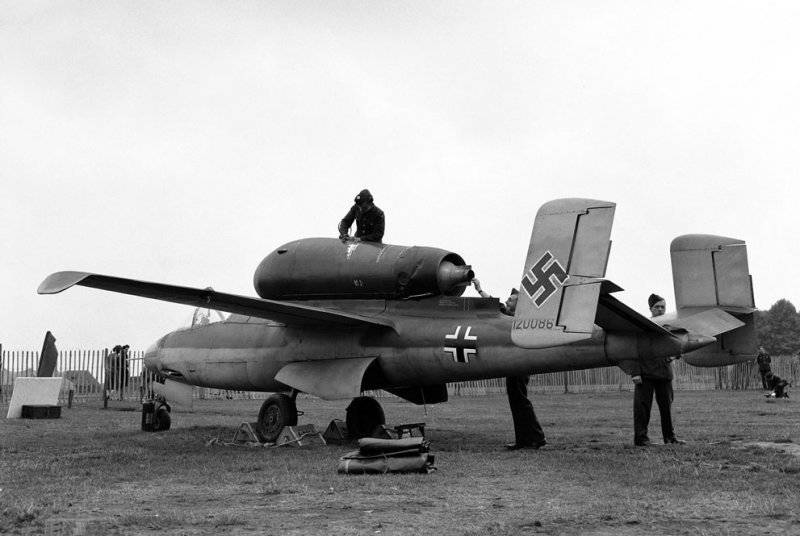 The fighter was fitted with a BMW-003E1 turbojet with a weight of kgf in 800. The engine allowed the plane to reach speed at an altitude in the area of ​​900 km / h. The fuel supply was equal to 945 liters, of which 763 liters were in the fuselage tank, which was immediately behind the flight seat, another 182 liters were in 2-x wing tanks.

Armament aircraft consisted of 2-x automatic guns, which were different depending on the modification of the aircraft. In the Non-162 A-1 modification, these were the 30-mm Rheinmetall-Borsig MK 108 cannons with 50 ammunition on the barrel, in the Non-162 A-2 modification, two automatic Mauser MG 20 / XNX guns were used, two Mauser MG 151 / XNX automatic cannons used in the Non-20 A-120 modification. 151 shells on the barrel. In the process of firing, liners and chain links were ejected through special openings in the bottom of the aircraft fuselage. The reloading and lowering of the guns on the MG 20 / 108 was electric, and on the MK XNUMX guns, electropneumatic.

Production and combat use

In order to ensure the production of non-162 fighters in the context of the ongoing raids of Allied aviation, most of the enterprises were moved underground. So only in the abandoned gypsum mines in Mödling (near Vienna) the allies found an assembly plant, in the shops of which at different stages of readiness more than 1000 Non-162 fighters were found. The serial production of these machines was started only in January of the 1945 year, when it was possible to assemble the first 6 aircraft. In total, before the end of the war, the enterprises handed over parts of the Luftwaffe around 120 airplanes, and even more 200 vehicles were factory tested at that time. 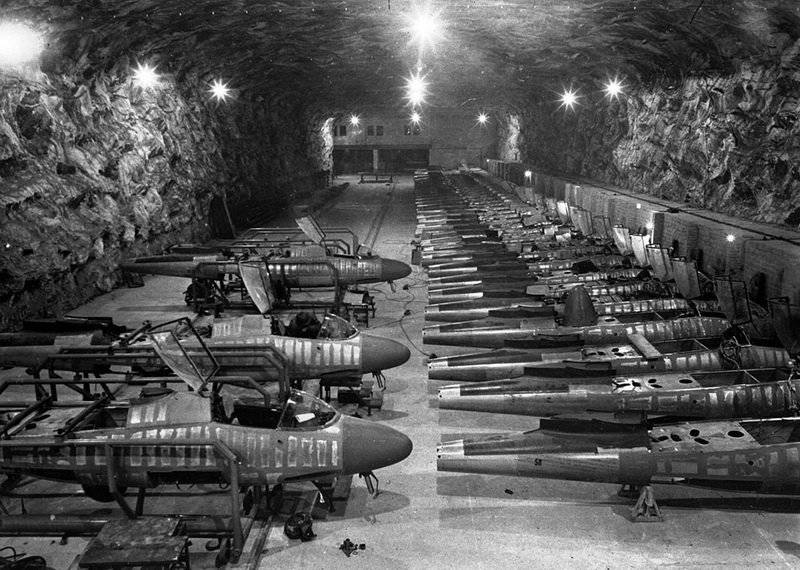 Despite its high performance characteristics, the Salamander never became a lifesaver for the Luftwaffe. There is no reliable data on the number of Allied airplanes shot down by them, but the score here goes to one. This was largely due to the fact that the "people's fighter" was not an airplane for beginners. Non-162 due to the installation of the engine above the fuselage had an unstable pitch. The fighter was not the most pleasant to operate the machine, which required very high accuracy from the pilot. It was not by chance that the first rule for pilots of these fighters was: “Always operate smoothly with the control knob — no abrupt maneuvers, no abrupt movements!” Even experienced pilots needed to undergo substantial flight training in order to get used to the fighter, to develop the necessary “car feeling”.

All this led to numerous accidents and disasters involving these aircraft. Many of them were due to design miscalculations, as well as manufacturing defects of fighters. So only during 3 weeks from April 13 and until the end of the war 1 squadron of 1 squadron, which was armed with non-162 fighters, lost 13 fighters and 10 pilots. However, only the 3 fighter were shot down by the Allies, the rest belonged to non-combat losses. Thus, only in this squadron for every 2 day did the average 1 crash occur.

Separately, it should be noted that all these results must be viewed in the context of the total collapse of the armed forces and industry in Germany in the final months of the war as a result of the actual defeat of the Reich. In the event that the fighter reached the combat units at least a year earlier, the results of its combat use could be completely different.

Performance characteristics of the He-162a-2