18 2012 June
0
Moscow Governor General Muravyov October 7, 1914 to the command aviation Russian army cabled:
"Today, in Moscow, the first test of a new trimonoplan Ensign AA Bezobrazova was a successful flight without preliminary tests immediately after the end of the construction."
After that, the governor-general claimed that Ensign Bezobrazsky "could, in the shortest lines, arrange a large workshop not only for his type, but also for any other system."

A.A. Bezobraz began to work in 1913, when a young enthusiast decided to create an airplane of his own design, which should be stable in the air, but at the same time have no horizontal tail, that is, be tailless. This idea was tempting and interesting, but so unusual that even the first drawings became the cause of skepticism and categorical doubts among the majority of consulting well-wishers. The specialists were confused by the three-winged tailless tandem and the age of the inventor, who did not have the appropriate education and sufficient experience. Some interpreted his last name as "no education."

Alexander in February 1914 showed his project to the Italian pilot-athlete F. Mosk, who came to Russia in 1912 year to catch his luck. Then he accepted the tempting offer of the Russian pilots Georgy Yankovsky and Max von Lerche to jointly build the NML aircraft. F. Moska actually co-authored Bezobrazov during the creation of the “trimonoplan”, having completed most of the design work.

There were many flying “bookshelves” with three or more wings at the dawn of aviation. If not all, then most of these aircraft did not have fundamental aerodynamic differences from aircraft of other schemes. To ensure longitudinal stability and controllability, they were endowed with horizontal tail, which was installed at a large distance from the center of gravity of the aircraft. In the considered variant, the triplane did not have a horizontal tail and was a three-winged tandem, having a small spacing of the triple box in height and a large extension of the wings along the horizontal axis. All wings had the same profile and base geometry. Each wing in appearance in the plan resembled the letter “M”, stretched to the sides with a constant profile chord on 60% span equal to 500 mm. From the inner edges of the ailerons, the end sections had an expanding shape in the plan, as well as arrow-shaped tips having end points. On the leading edges at the sweep fracture, rounding was introduced, giving the shape of a bird's wing to each bearing element. For the wings, we chose a triangular profile with a vertex on 35% chord having a slightly concave lower surface. Each wing consisted of two halves. The rear and front wings were connected in the plane of symmetry of the aircraft, and the middle wing, consisting of two shortened halves, was attached along the sides of the fuselage. The rear wing was rigidly attached to the tail section of the hull with a Y-shaped boar. The wings were tied together by four longitudinal beams made of steel pipes having an oval cross section. The pipes were arranged in pairs on 60% and 30% span. The beams had a hook on the mustache on top of the rear wing and the lower hanging front wing. Beams through the middle wing passed through, fastening to its spars using metal flanges having the shape of an ellipse. The terminations of the longitudinal force elements of the box had the same flange fittings. In the fastening zones of each wing to the beams, their profile was threaded with vertical sprengels intended for wiring the lower and upper aileron control cables. Impregnations of the sprengel were fastened on top with ribbons with four-rod high fuselage boar, and with the landing gear low. In addition, they arranged a diagonal raschalochny network to tie the seals of the beams between them in the wings, apart from the sealing of the central transponder of the first wing, to which the rotating propeller prevented the wiring of ribbons.

Chassis - two U-shaped racks, to which were attached the curved lower crossbar, which are necessary for the installation of the wheel axle and ligaments using a cord rubber damper. The fuselage of the airplane began with a casing that covered the 80 and the powerful Gnome engine, developed by French designers Seguin and Luc. Next, there was a compartment in which was located the central transmission of the engine, above which was installed oil and fuel tanks. 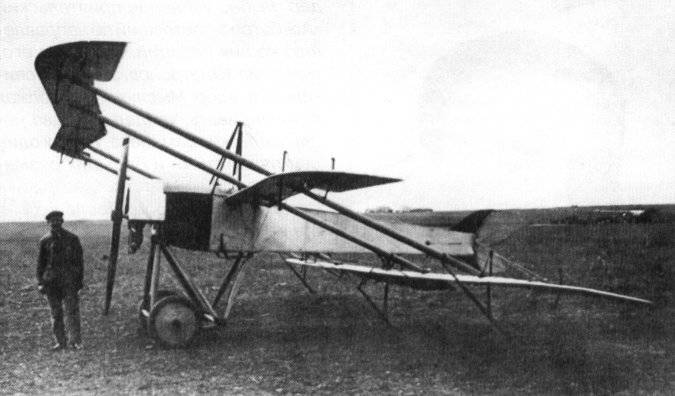 Triplan Bezobravo - the original airplane, which Ivan Orlov flew in May-June 1917 of the year

According to the original project, the engine was to be installed in the middle of the fuselage with the installation of a long shaft to the pulling screw of the airplane. At the same time, Bezobraz wanted to install the pilot's seat behind the engine in a glazed closed cockpit with a periscope. This cabin would give the fuselage a spindle-shaped streamlined shape. However, an experienced companion Mosca objected to him, and the airplane was created with a normal fuselage, having an open cockpit from which the pilot has a circular view. The front side of the cockpit, on top of which was installed a transparent visor, made of celluloid, was raised on a convex conical gargrote above the upper side members of the fuselage. This elevation was started to install the necessary flight instruments in front of the aviator's eyes. Behind the back of the pilot seat of the single-seater airplane inside the tapering in height and width of the tail section of the hull 5 rectangular frames along the diagonals covered with canvas and sheathed with plywood were braced.

Bezobraz many times regretted that he could not realize the idea of ​​a round sleek fuselage, but Mosca each time returned Bezobrazova to the current reality. Under the conditions of a primitive production base, which was located near the Khodynka field in a barn workshop, it was almost impossible to glue a good monocoque. In addition, the German war soon began, so the lost illusions were forgotten.

The construction of the airplane was completed by October 1914, a month after the fighting began at the front. Bezobraz saw a single-seat fighter in his work, but his associate did not share this opinion and believed that their plane was interesting only as an experimental aircraft. To the amazement of the majority of aviators, the first flight of F. Mosk was very successful, without any preliminary approach and jogging. A rather strong wind arose at the airport, while the pilot was taxiing from the parking lot in order to run across the field. Sensing that the airplane itself was asking to fly, the pilot pressed the gas and the plane easily climbed up to 50 — 70 meters. Having completed three steady turns around the launch site at an altitude of about 250 meters, Mosca landed. There was no music and colors, because no one thought that this “web” could rise into the air. 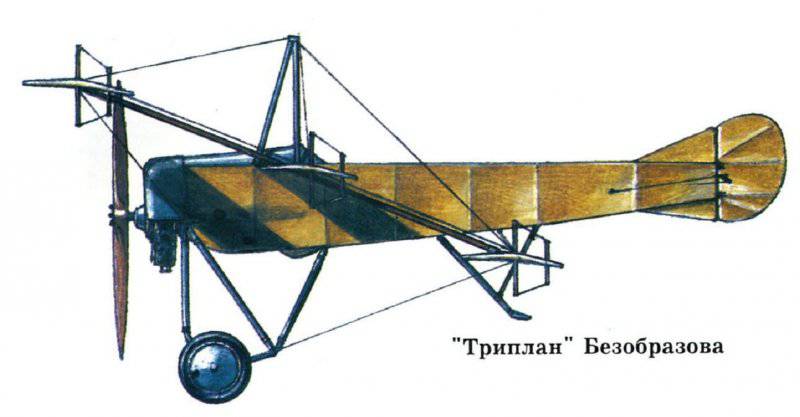 So significant event A.A. Bezobraz could not rejoice, since in the first days of September he, as a regular officer, was at the front. He was able to get back to business only in December 1914. Bezobrazov, after being seriously injured for a long time, was in the hospital. At this time, his "trimonoplane" was transferred to the Crimea, where F. Moska at the Sevastopol Aviation School continued his fine-tuning and testing. Bezobraz arrived in the Crimea in January 1915, and without F. Moski throughout the year, he continued to improve and redesign the device, until in June 1916 returned to Moscow again. Pilot Orlov 6 August 1916 g. Crashed during takeoff. The accident occurred as a result of a wheel axle breakdown - the plane, pecking, turned over onto its back. Triplan was repaired in March 1917. Further experiments with the aircraft were suspended. Type and installation weapons on the hypothetical fighter Bezobrazov not known.