February 19 2019
43
JSC "Special Design Bureau of Mechanical Engineering" from the composition of the concern "Tractor Plants" told about the current work on one of the promising models of armored vehicles. After several years of waiting, the company announced the start of tests of one of its new developments. This is a promising floating armored personnel carrier BT-3F, developed on the basis of the infantry fighting vehicle BMP-3F. This car has been repeatedly demonstrated at domestic exhibitions and is already known to specialists and the public. In the near future, it can enter mass production.


On the launch of a new phase of work on the project BT-3F 16 February reported RIA News. The chief designer of the SKBM, Sergey Abdulov, informed the news agency about the recent launch of the running tests of the armored personnel carrier. This work will take several months. Trials are scheduled for completion this fall. Other details of current work or the project as a whole were not specified. 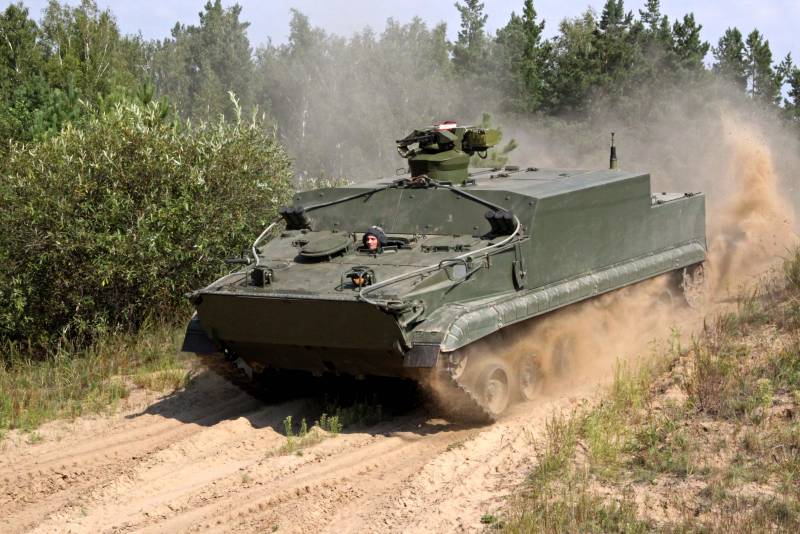 Earlier it was announced that the BT-3F armored personnel carrier was an initiative developed by the SKBM, which was made in accordance with the current requirements of the international market. Even before the first public display of this machine interested in the armed forces of Indonesia. It was also reported that interest in the BT-3F showed the Russian army. However, while the contracts for the supply of finished equipment were not signed.

The BT-3F armored personnel carrier is a floating armored combat vehicle intended for the transport of personnel. The basis for this model was taken infantry fighting vehicle BMP-3F, which in a certain way simplified the development and assembly of equipment, and should also affect the simplicity of its operation. A significant part of the units is borrowed without any changes, whereas the applied modifications give the armored vehicle new possibilities.

The main improvements in the new project underwent armored corps. Instead of a regular under-turret box on the BT-3F, a high deckhouse with an inclined frontal sheet and vertical sides is used. Frontal logging has invoice bookings that increase the overall level of protection. Apparently, this is done in order to obtain the same level of protection for all elements of the frontal projection. Recall the base BMP-3 protects the crew from firing from the 30-mm automatic cannon from the front corners.

The use of felling has led to an increase in the internal hull volumes necessary for the deployment of the landing force. The troop compartment occupies the entire middle part of the corps and is located at the place of the combat compartment of the base BMP-3F. In the existing volume managed to place 14 paratroopers with weapons. Access to the habitable compartment is provided by several hatches. In the roof of the cabin there are two large rectangular hatches. The feed passages used by the infantry combat vehicle were retained, but their design was changed. Due to the increased height of the hull and for greater convenience of the landing on the top, the aisles are closed with inclined flaps. Aft doors remained in place.

In front of the felling roof, the installation of a remotely controlled combat module is provided. Initially it was a product like DPA-T. This module has a combined day-night surveillance and a laser rangefinder. It is installed a PKTM machine gun caliber 7,62 mm. The weapon is controlled from the workplace of the shooter, on which the monitor and the control panel are located. 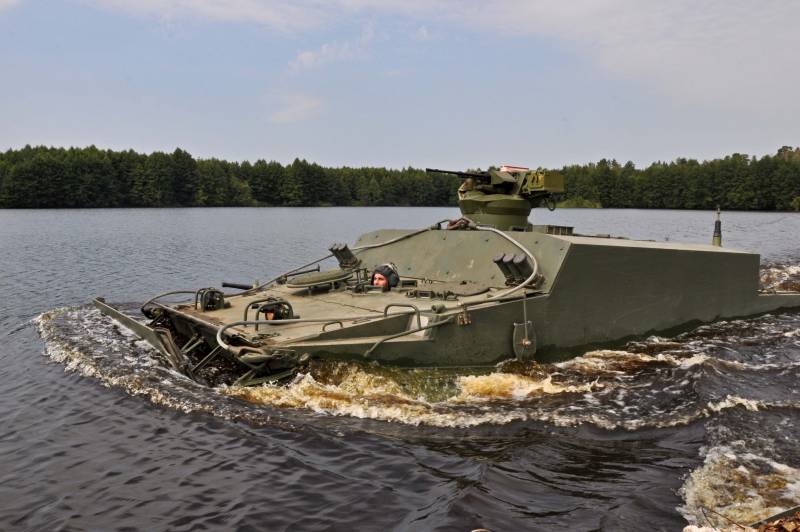 Tests on the water. Photo Bmpd.livejournal.com

Initially, the possibility of using different combat modules with different weapons - up to a machine gun caliber 14,5 mm or 40-mm automatic grenade launcher. For example, in 2017, a prototype of the BT-3F with the Kord heavy machine gun was demonstrated.

In the forward part of the body, two course PKT machine guns that were present on the BMP-3F remain. Depending on current conditions, they are controlled by their own shooters or driver-mechanic, remotely. Two sets of “Cloud” grenade launchers are placed on the reinforced front cabin log. Embrasures for firing personal assault weapons are not provided.

With the exception of the installation of the cabin and the corresponding alteration of the central part of the body, the BT-3F is almost no different from the base BMP-3F. In front of the troop compartment is located the office with three seats. The stern compartment, as before, accommodates a low-profile power unit, above which there are passages for the landing. The chassis is not finalized and retains the original design.

In the front office there are three places: for the driver (in the center) and for two shooters. These places have their own hatches in the roof of the hull. The entire landing force is transported in its own compartment with access through the stern or upper hatches.

The UTD-29 diesel engine with 500 hp power is located in the rear of the hull. Hydromechanical transmission provides power transmission to the drive wheels of the tracked chassis and to the jet propulsion. The chassis includes six road wheels on board, each of which has its own torsion bar and hydraulic shock absorber. Above the bottom of the stern are two jet propulsion to move through the water. It also provides for the installation of a pump for pumping water from the internal volumes of the body. 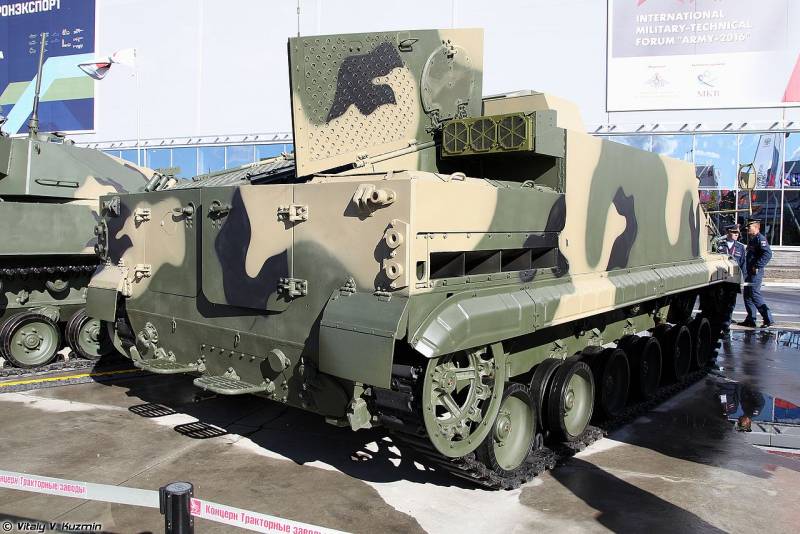 Despite a serious redesign of the structure, the armored personnel carrier is almost the same in size as an infantry fighting vehicle. The length of the body reaches 7,15 m, width 3,3 m, height - about 2,3 m. The total combat weight is defined in 18,9 t. Driving performance remains at the level of the base machine. The maximum speed on the highway is 70 km / h, the power reserve is 600 km. On the water, speeds up to 10 km / h with a duration of navigation up to 7 hours. Movement by water is possible during waves and waves up to 3 points. Transportation of the vehicle by military transport aircraft with a carrying capacity of at least 20 t is possible.

The project BT-3F was announced in 2016 year. By the time of the first publication of information, some tests have been performed. Soon, a prototype of a promising armored vehicle was shown at the Army-2016 international military-technical forum. Subsequently, an armored personnel carrier was shown several times at other domestic exhibitions. Several times the developer organization has published new information on the progress of the project; The latest news of this kind appeared a few days ago.

Back in 2016, it was reported that Indonesia was showing interest in BT-3F. Armed with this country is more than fifty armored vehicles BMP-3F and about 150 order of outdated armored personnel carriers BTR-50; Most of this technology serves in the Marine Corps. To maintain this type of troops at the proper level, the Indonesian army needs new equipment, such as the BT-3F. With their help, the existing BTR-50 can be replaced. Over the past years, the real supply contract has not appeared, but it can be signed after the completion of the current tests.

In the recent past, the Russian Ministry of Defense also became interested in an armored personnel carrier based on the BMP-3F. According to the latest news, BT-3F is considered as a possible replacement for fairly old multipurpose conveyors MT-LB. Apparently, we are talking about a possible modernization of the fleet of marine equipment, which has to use old vehicles as armored personnel carriers for personnel. In such a role, the new BT-3F surpasses the existing MT-LB in all respects and can significantly affect the combat capability of the units. 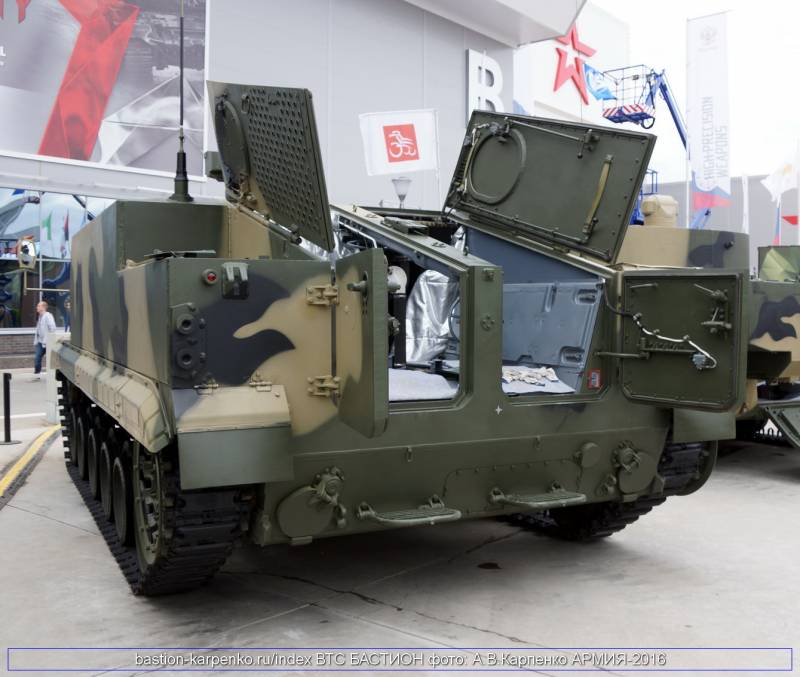 View of the stern, landing hatches are open. Photo Bastion-opk.ru

It should be noted that the Russian military has also not yet placed an order for serial production of the BT-3F. Whether the existing interest will lead to the appearance of a real contract is unknown. The latest tests, which became known a few days ago, can be conducted precisely in the interests of the Russian army.

In its concept, the BT-3F armored personnel carrier resembles an outdated BTR-50 vehicle. It is a tracked protected vehicle capable of transporting and dropping infantry, as well as supporting it with machine-gun fire. In addition, it is optimized for work on the water: crossing obstacles, landing sea amphibious assault forces, etc. Equipment built on the basis of such a concept may be of interest to different armies, including the Russian one.

The proposed project has a number of positive features. First of all, it is necessary to note the use of a finished platform with high performance. The BT-3F is built on the basis of the BMP-3F serial infantry fighting vehicle, which gives the well-known advantages of an engineering, industrial and operational nature. Technique on the finished chassis, which retains most of the original units, is relatively easy to develop, build and use in the army.

From its predecessor in the form of the BTR-50, the new BT-3F stands out with an increased level of protection. The old armored personnel carrier had homogeneous armor with a thickness of up to 10-13 mm and could only protect against bullets and shrapnel. The housing on the basis of the BMP-3 has a spaced aluminum reservation with steel elements, which allows it to provide all-protiv bulletproof and anti-bullet protection in the frontal projection. Thus, there is a significant increase in combat survivability. At the same time, in the body of the new armored personnel carrier it was possible to place only 14 landing sites against 20 in the BTR-50.

An important feature of the BT-3F is the ability to install various combat modules with machine-gun or grenade launchers. Compatibility with combat modules of different types allows the customer to choose the desired equipment and weapons. The presence of the combat module as a whole increases the safety of the crew, since the shooter gets the opportunity to fire from under the armor. 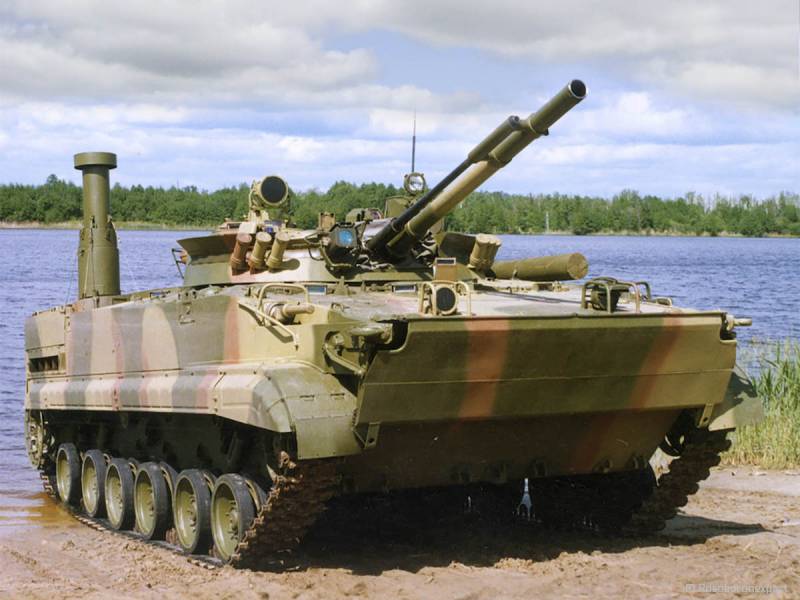 However, the proposed sample has drawbacks. Based on a fairly old platform, an armored personnel carrier may not fully meet modern requirements. So, some customers may not be satisfied with the existing level of protection. Also, BMP-3 and its modifications are criticized due to the specific process of landing and dismounting of the landing.

With all its pros and cons, the BT-3F armored personnel carrier turns out to be a very successful model of a protected vehicle for infantry and cargo unified with other equipment. Such a machine may indeed be of interest to armies and may become the subject of a supply contract. According to known data, only Indonesia and Russia, having a significant fleet of BMP-3 and in need of a new technology, were interested in the armored personnel carrier. It is possible that in the future BT-3F will attract the attention of other customers. The commercial success of the development can contribute to the positive completion of the ongoing tests planned for the fall.