The number of models of rifled long-barreled weapons available for citizens of the Russian Federation is enormous, in diversity it is not inferior to smooth-bore-long-barreled weapons. Conventionally, the market for rifled long-barreled weapons can, by analogy with the smooth-bore, be divided according to several criteria, according to the manufacturers, domestic / foreign rifle, and for the intended purpose, hunting / sport / self-defense. Although the last paragraph in relation to the rifled already looks quite specific. Again, by analogy with smooth-bore weapons, there is interchangeability - with the same sample you can both hunt and play sports.

I see no reason to consider the rifled long-barreled weapons of the USSR period — it was, but its nomenclature, in comparison with the present, was extremely limited.

Most of the samples proposed by the domestic manufacturer of rifled long-barreled weapons are represented by alterations of the AK / PKK / SVD military weapons into civilian samples. To do this, the possibility of shooting bursts was removed, in some cases, the barrels were performed with the worst ballistic characteristics, the capacity of the store was limited to ten cartridges. Also, the “trimmed” rifled long-barreled weapon is often available in several versions - a classic “army” version, or in a wooden bed, which is ergonomically more convenient for hunting.

The production of rifled long-barreled weapons based on the design of Kalashnikov assault rifles is handled by the same-name Kalashnikov Concern. Virtually the entire range of products manufactured by the concern is delivered to the market in civilian performance.

Of the new products, there is a version of Sayga chambered for 9x19 and a version with balanced automation that reduces recoil when fired.

It is with a wooden box and butt, for lovers of classic AKM design. 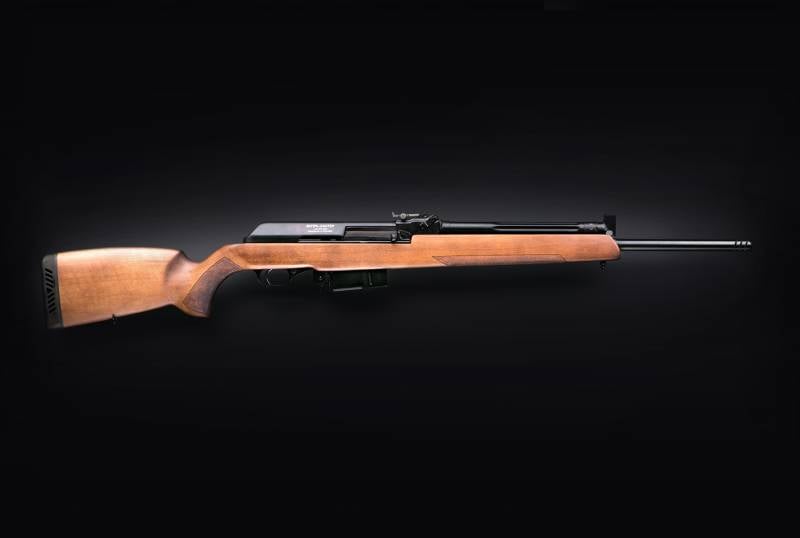 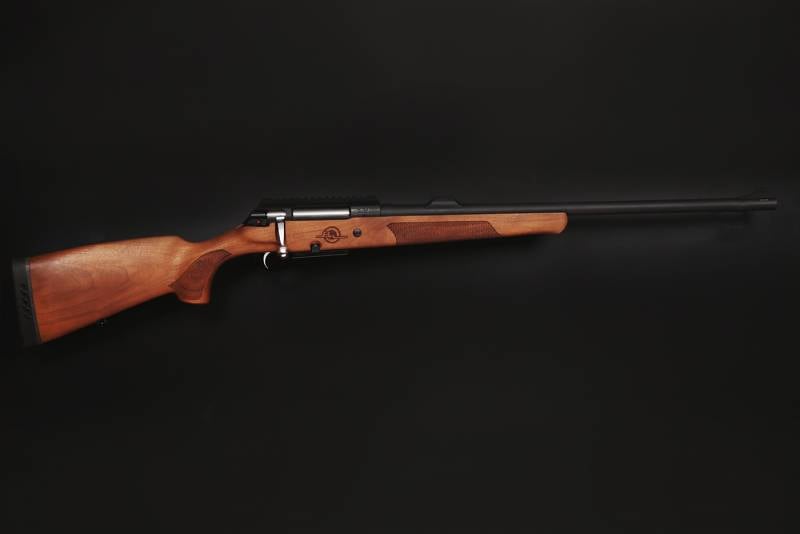 For lovers stories Civilian versions of weapons of the Second World War - PPSh, RPD and others. 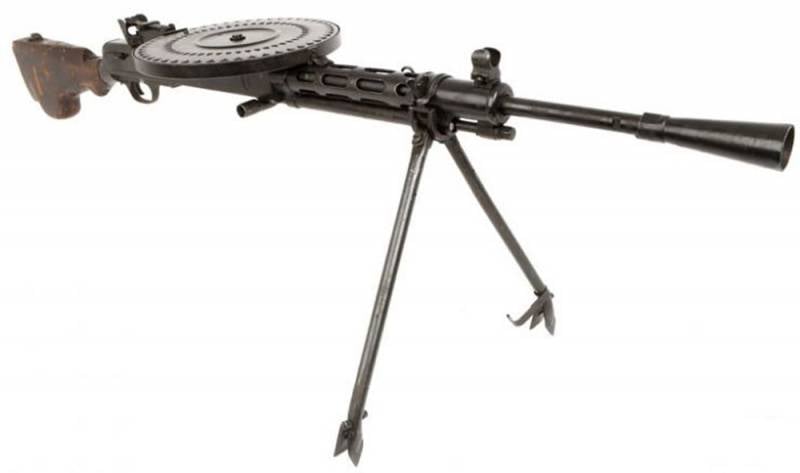 The range of "Hammer Weapons" and "Kalashnikov Concern" is expanding rapidly. The cost of weapons produced by these enterprises allows them to be acquired by the majority of the working-age population of Russia. If the new can not afford, then the services of buyers second-hand market. There are certainly less offers than for smooth-bore weapons, but quite enough. 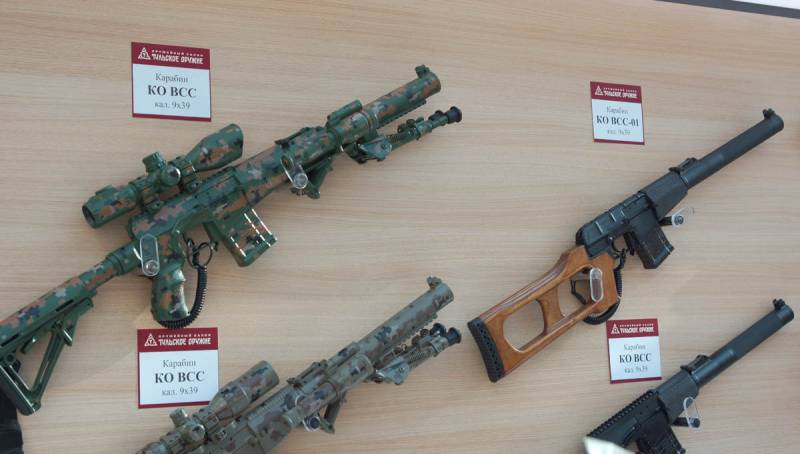 The variety of models offered on the market for rifled long-barreled weapons, gave impetus to the development of small private tuning companies. Their kits can significantly improve the characteristics of tuned weapons. 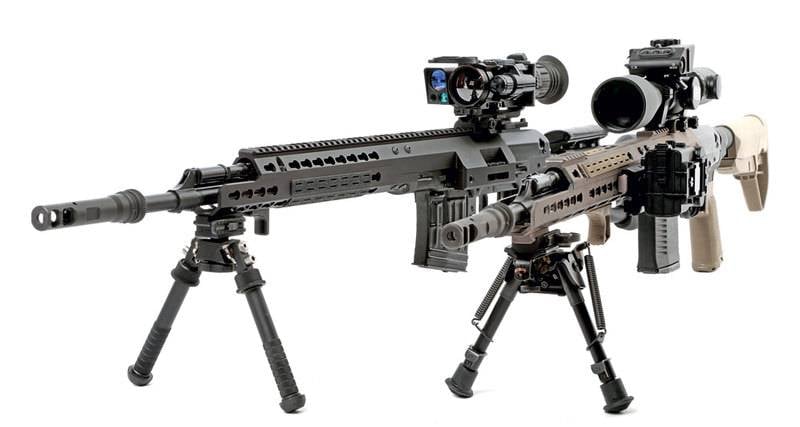 [
i] TIGER carbine tuned with an aluminum lodge (chassis) and Vlasenko butt. Implemented posted trunk, the ability to install sights and additional equipment [/ i]

The Orsis company (Promtechnologii) has become a relatively new player on the Russian weapons market. The company was founded in 2011 year, equipped with modern equipment, and to date, produces a number of samples of high-precision rifles.

In the nomenclature, you can select the ORSIS 120 carbine with a longitudinally sliding butterfly valve, which has a fairly reasonable price for weapons of this level of performance.

The ORSIS T-5000 precision rifle is available in various calibers, up to .338 LM (Lapua Magnum), and allows you to work at a distance of up to 1500 meters.

The company's new universal tactical self-loading carbine ORSIS-K15 "Brother" chambered for .308 Win., Made according to the scheme of an AR-15 type weapon.

Another company that manufactures precision weapons in Russia is the Integrated Systems Design Bureau (“KBIS”), offering rifles under the Lobaev Arms brand. The history of the Lobaev Arms brand rifles begins with the creation of the Tsar Cannon company, founded by the brothers Vladislav and Nikolai Lobayev in the city of Tarusa (Kaluga region) in 2003. The company developed and manufactured the SVL rifle - Lobaev's Sniper rifle, a precision weapon using the powerful .408CT cartridge and allowing to hit a target at a distance above 2000 meters. The SVL rifle was adopted by the Federal Security Service (FSO). On the basis of the SVL, a civilian model of the OVL (Lobaev Hunting Rifle) was released, differing from the SVL by its name.

In 2010, the Tsar-gun company refused to renew the license for the development and production of weapons, and therefore they had to curtail their activities in the territory of the Russian Federation. The reasons for this event are shrouded in darkness, there are various versions with which readers can familiarize themselves on the Internet. The company team led by the founder continued their activities in the UAE.

In 2013, the company returned to Russia under a new legal entity, KBIS and the brand Lobaev Arms. The priority of "Lobaev Arms" is a world-class precision weapons. Citizens of Russia can purchase precision weapons with characteristics available only to elite special forces.

The model range of “Lobaev Arms” is expanding, in the company's plans a high-precision long-range semiautomatic device in calibers .338 LW (Lobaev Whisper) and .408 LW, available for purchase to citizens of the Russian Federation.

There is also a huge number of foreign-made rifled long-barreled weapons on the market.

As an example, we can cite such a high-class weapon as the Blaser Tactical 2 / R93 LRS2, produced by the German company Blaser. This weapon is equipped with an original longitudinal sliding collet bolt of direct action and is available in calibers up to .338 LM

The Blaser R93 rifle is also available in other calibers, including the classic hunting version, for different types of hunting.

The creation of Blaser R93 was attended by the deputy chief designer for the design work of the German company “Blaser” - our compatriot Sergey Vasilyevich Popikov, who emigrated from Russia at the beginning of the 90-s. Before moving, he worked at the Tula Arms Plant and lived at the entrance of a house next door to the author. One can only assume how many minds have flowed out of Russia in the years of perestroika and, perhaps, is leaking now.

Of the manufacturers of inexpensive foreign weapons that can compete with domestic companies, you can name the Czech company CZ, for example, their model CZ-550 "PREDATOR" under the powerful hunting cartridge .30-06 Springfield.

As mentioned earlier, the range of rifled long-barreled weapons in Russia is huge, and in order to choose something for your taste you will have to study the offer on the market, read reviews and reviews of the owners.

The sanctions imposed against Russia led to the absence of cartridges of certain calibers in the domestic market. Russian plants have mastered the production of some of the inaccessible or poorly available calibers, but not all. For example, production of 30-06 Springfield cartridges has begun, production of .338 LM cartridges is planned. Also, a gap in the quality of Russian cartridges is often noticeable, compared to foreign ones, far from in our favor.

The absence of high-precision ammunition in the market, such as .338 LM, .408CT, or their domestic counterparts, is not so much critical for the civilian market for rifled long-barreled weapons, how unpleasant it is from the point of view of state security.

On the other hand, since 2018, citizens are allowed to self-assemble cartridges for rifled weapons, this will allow professional athletes and hunters to get better shooting results using their own collected cartridges.

Let's go back to the domestic manufacturer. It would seem that there are weapons samples on the market for all imaginable tasks of athletes and hunters, but the market may not stop.

A branch of the Tula Instrument Engineering Design Bureau - TsKIB SOO is a large-caliber hunting carbine MC-558. The manual reloading carabiner of the bullpup layout is made on the basis of the silent exhaust sniper rifle chambered for 12,7 × 55 gauges SP-130, .300 LM, .338 LM. 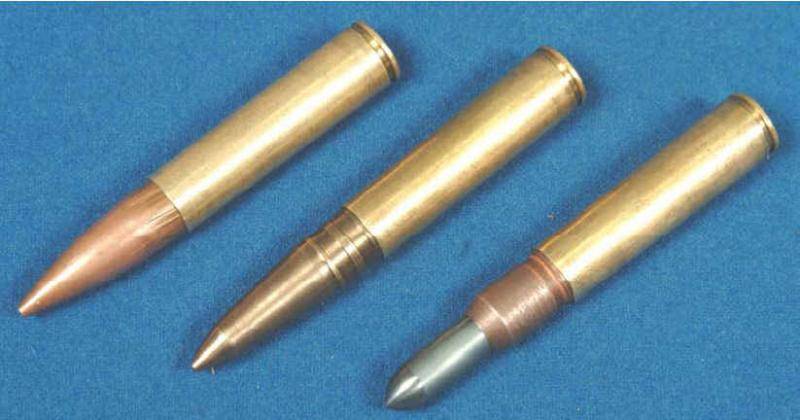 Finally, the Novosibirsk Cartridge Plant began the production of hunting cartridges of the 12,7x108 caliber. At the moment, these cartridges are made only for export.

However, at the Army-2018 forum, Alexei Sorokin, director of TsKIB SOO, announced the development of the civilian version of the OSN-96 sniper rifle of the 12,7 caliber mm.

OSV-96 is a Russian large-caliber sniper rifle designed to destroy enemy personnel and equipment at long distances. The rifle uses a powerful cartridge 12,7x107 mm (both machine-gun and specialized sniper), its target range is 1800 m. The size of the store OSV-96 is five rounds. The rifle is in service with the Ministry of Defense, the Interior Ministry and the Federal Security Service of Russia.

Rifles caliber .408CT and 12,7х107 mm in range and shooting accuracy, as well as to some extent on the action on the target, you can compare high-precision guided weapons.

Based on what is presented in the review, we can conclude that the citizens of Russia can acquire weapons that are not inferior to those in service with the army and special services. These are conditionally “assault” weapons, and weapons of an infantry sniper (marksman), and weapons intended for special operations by special forces, and the so-called “antimaterial” weapons (intended for destruction of equipment).

To improve the skills of possession of rifled long-barreled weapons can be trained. For example, Lobaev Arms has a proposal - “Lobaev's school of ultra-long range shooting”, where they teach shooting at a distance over 2000 meters. Courses consist of basic (5 and 10 days) and specialized (from 3 days).

It should be noted on the gradual increase in the number of shooting galleries and shooting ranges, where the owners can legally use their weapons, as the hunting, which is allowed to use a rifle, is not affordable for everyone, and not everyone has the desire to shoot at animals.

Apart from short-cut rifle weapons, the ability of Russian citizens to acquire weapons is not much inferior to the capabilities of US citizens, and significantly exceeds what is available for citizens of many other countries.

Despite such an impressive arsenal available to citizens of the Russian Federation, there are no military coups and similar scary people in the country.

Let's hope that this situation will not change in the future. Athletes, hunters and just a weapon lover will be able to legally acquire the best samples of the world arms market.