Announced a prototype of the newest American assault "super rotor"

December 13 2018
102
December 12 2018 in the British press was submitted A review of the next-generation assault “super-bolts” of the next generation, which is being developed for the US Army and together with a similar light machine gun, should replace both the M50 / M16 created more than 4 years ago and the M249 light machine gun.


As you know, for many decades of the domination of the M16 by the American gunsmiths there have been repeated attempts to replace it, however, to the mass introduction in the US Army of infantry weapons New types they did not bring.

However, it seems, the leadership of the Pentagon decided to change the situation. Recently, a presentation of a light new machine gun, created by a pool of American military corporations, including Texton, was organized, and just yesterday, in addition to this, a new example of an assault rifle of the same concept was presented.

The main difference between the new types of small arms intended for the American army is that they decided to switch from 5,56 mm to 6,8 mm. 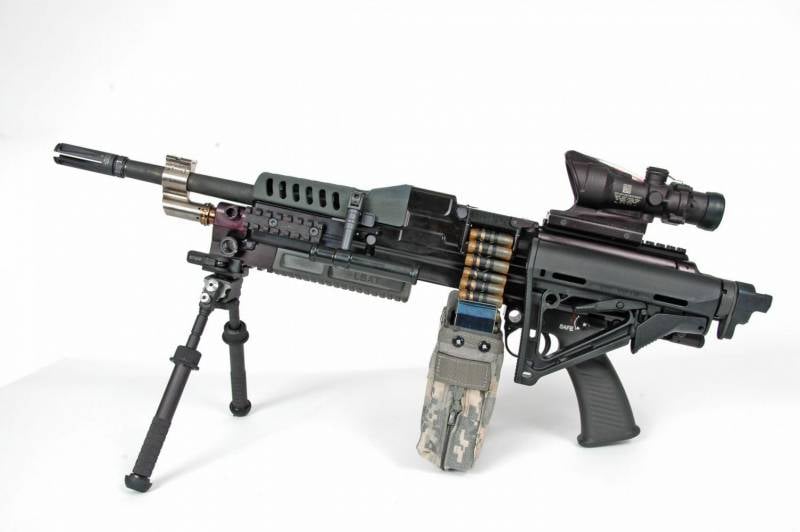 The prototype of the newest light machine gun of the US Army caliber 6,8 mm. Image source: www.wallpaperup.com

However, the new light machine gun and assault rifle will not only have more weight and accuracy of the bullet with an overall lower weight. It is believed that, thanks to a number of know-hows, this weapon will have a huge penetrating ability and “the bullets fired from it will be able to penetrate any perfect protection for the body, both modern and the one that is only being developed now and which we will only know about in the near future ”(quoted from the self-confident statement of the American General Mark Milli).

The American senior officer also reported that the pressure in the camera of the classic M16 is 45 kilo-pounds per square inch, whereas in the new assault rifle it will be much larger than the 60 KSI, which is comparable to the pressure in the tank gun chamber.

Also, the American general noted that new types of small arms will allow shooting at much greater distances with higher accuracy.

It is generally considered that the above caliber 6,8 mm, located between 5,56 mm and 7,62 mm, is “far-fetched”, “ineffective”, it “came from nowhere”, etc. To dispel doubts in this matter, say the following.

This caliber proved its effectiveness a century ago, and in recent decades in Western countries there has been a certain tendency to use precisely 6,5-6,8 mm calibers. In particular, in 2008, Dr. Harry Roberts, a ballistics expert and former American officer fleet, publicly announced the chronic problems of mass American small arms that have not been resolved in decades, and announced the urgent need to rearm the American army with a new caliber.

He also made an analysis and revision of 1920-s data on the use of .276 caliber ammunition (“Peterson caliber”), on the basis of which he made his conclusions. But, as you know, the production of the Garand T3E2 rifle was halted in favor of the weapon .30 caliber, because a more powerful caliber was then considered redundant.

Then, after World War II, the X-NUMX-mm T-7,62 cartridge was created in the USA, which had almost perfect ballistic characteristics for the .65 caliber. This, along with the interests of a number of American industrial lobbyists, forced NATO to take it as a standard rifle cartridge instead of .30 (270 mm) and .6,8 (280 mm) calibers options.

In addition, the idea of ​​the end of the 1950-s about the need to move to a light assault rifle led to the adoption of the US Army 5,56 mm caliber, based on the .223 caliber (“Remington”, often used in the US in hunting for small game).

And for a long time, light and high-speed bullets were considered not only more accurate, but also causing more devastating injuries due to the "tumbling effect" and "hydrostatic shock." However, military practice has shown the fallacy of such interpretations. In this connection, in 2002, the US military officials finally launched a program to search for new calibers for light rifles. 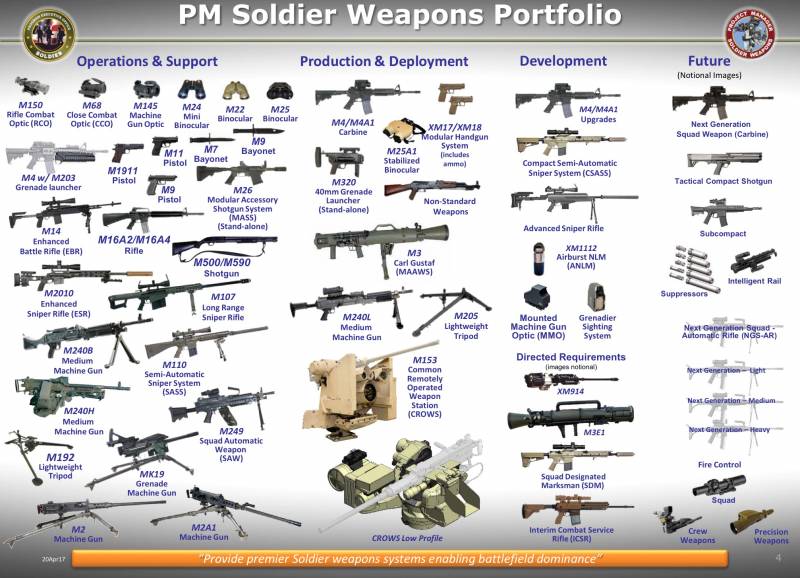 Types of used, adopted and developed small arms of the US Army. Image source: http://soldiersystems.net

In 2004, during complex ballistic studies, it was found that the best defeat of the human body covered with various types of body armor is provided by 6,5-7 mm caliber (the assessment was made for mm 5,45, 6 mm, 6,5 mm and 6,8 mm). The result of this was the report adopted in 7, according to which the best ballistic properties were recognized for the 7,62 mm cartridge, on the basis of which new standard ammunition was created, which were handed over for testing by one of the US special forces groups.

It is not known where the new caliber was tested in combat conditions, but, one way or another, the American special forces were very pleased with the results. True, apparently, successful field trials were not enough, and the "undercover games" delayed the development of the program for the introduction of a new caliber for a few more years.

It was necessary to conduct new large-scale studies conducted for the 2015 year, so that the results obtained using the 6,8 mm caliber were confirmed.

Based on this, a number of experts proposed a re-equipment program for the M16 to a new type of assault rifle with a caliber 6,8 mm. However, there were no plans to introduce radical changes in the new type of weapon, but it was recommended to switch to an intermediate caliber using the old M16 / M4 platforms (introducing a new cartridge shell, a new type of bullet, a new recoil reduction system, a new aiming system, etc. ).

But, apparently, the officials from the Pentagon this time wanted to get a qualitatively newer, revolutionary weapon. The result of the choice (despite the adoption of the M16 upgrade program for a new caliber) was the draft of the newest assault "super-screw", in fact, developed from scratch, but taking into account the technologies and design solutions tested by decades for the M16.

Another, very important innovation, judging by the statements of the US military, is the use of a new integrated fire control system. This is done through the use of the new FWS-I gun sights family, operating on an all-in-one basis. According to General Milli, after proper training, "all this will literally make a quantum leap in the shooting skills of an individual fighter."

In this case, it is believed that this integrated fire control system will allow the combat radius of each soldier operating as part of a small unit, as adopted by the American army, to be expanded from 300 to 600 meters.

However, as Daryl Islik, an expert on rifle training, emphasized, good shooting skills are basic, and each recruit must begin with training on conventional iron sights, gradually moving to more advanced models.

According to the American expert, the tests showed that if the soldier is already shooting well, the newest fire control system will be more useful to him, and he will use more of its capabilities than the less competent shooter. 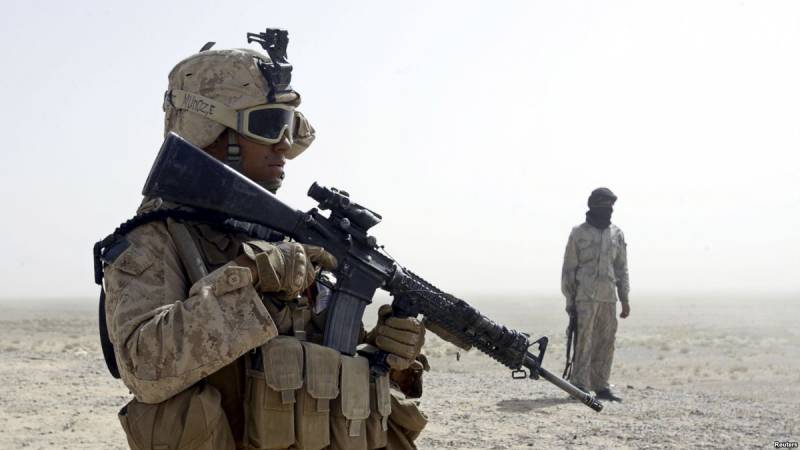 In addition, the above expert noted that the new small arms (light machine gun and assault "super-screw") expands the firepower of an individual soldier, but not necessarily the entire squad. Just with the 6,8 caliber mm, a small tactical group will have a greater distance of fast effective damage.

It is separately noted that the introduction of new weapons will not cause radical tactical changes in the actions of American soldiers, and the terrain on which military operations will take place will prove to be a more significant, in fact, decisive factor.

So, an American expert said that dense jungle or forest greatly reduces the line of sight and levels the expanded capabilities of the lesion ranges.

It is also recognized that the expansion of the tactical combat radius of the individual soldier will be leveled by the dense urban development. However, according to the Americans, with a significant increase in penetration power and shot power in caliber 6,8 mm will allow shooters to work more effectively against certain types of shelters.

The first shipments of the assault "super-screw" and the new light machine gun to the US Army are expected in the summer of 2019, and at the same time supplies of new night vision systems and the latest generation of integrated aiming systems are expected.

It is planned to rearm most of the American army with new types of small arms and equip them with integrated fire control systems by 2023.