The story of one fake photo

December 14 2018
35
In early September of this year, one of the Chinese media resources published a captured video frame, which depicted a non-nuclear (diesel-electric) submarine (NPSL / DEPL) of the Russian project 877EKM, but not simple, but elongated. Approximately 15 meters longer than themselves in the normal state. The Chinese lovers of the entire military quickly took this frame into circulation and came to the conclusion that this boat is equipped with an air-independent additional power plant (VNEU, in the West, they are called AIP) for maneuvering into position in the embedded compartment. A very popular topic in the world today for non-nuclear submarines, everyone wants to get such boats, including the Russian Navy, although we have been working on this issue for a very long time, both on additional nuclear power plants and on fuel cell electrochemical generators. But we are not in a hurry with this technology, promising it only on the next generation of naval submarines. So people suggested that one of the two existing pr. 877EKM is also equipped with such a compartment with a Chinese VNEU development. The Chinese have chosen external combustion engines for the VNEU, they are Stirling engines - such are on the Swedish and Japanese submarines, obviously, there are Chinese and "ripped off" technology. It is unlikely that similar work on the sidebar compartment on our ship building, had they been carried out, would have been possible without the developer of the ship, however.

Here is the "Varshavyanka" with an insert.

But further with this boat, ambiguities began. The Chinese official publication Naval & Merchant Ships in December 2018 published an image of this "Stretch Kilo" (as it was called). Only this image immediately raised suspicions that it was a fake, despite the fact that the publication is considered a reliable source. In particular, Mr. HI Sutton, a well-known researcher of underwater military topics (both submarines and underwater propulsion systems, means of towing saboteurs and divers of anti-sabotage forces, semi-submersible boats, rebreathers, etc.) and the author of not only his own blog and website on this topic, but also a number of reference books, suggested the following.

The length of the 877ECM pr. With Chinese insertion is labeled 88 m versus 72,6 in the original modification. But a compartment longer than 15 m is much larger than any other compartment with a VNEU in the world. Thus, a compartment developed in the Russian Federation for similar boats is no more than 9-10 m long, and the compartments under the Stirling are from the Swedes or 8 m long, or 12, but on boats with a much smaller diameter durable hull than our large Varshavyanok ". You can, of course, assume that the Chinese are screwed up with the design of the compartment, and because it is so big, but the oddities are just beginning. The image in the section of the compartment itself with the VNEU shows 9 frames, and those depicted incorrectly, not in the same way as the two-part Varshavyanka should be inside, not the outside of the strong case. The distance between the frames on this project is known - 60 cm, it means that the order of 6 meters is about the length of the drawn compartment, not 15 m. But God bless him, maybe only half of it is not so important. Or the Chinese, who drew this picture for the official publication, were from that very strange tribe that received the nickname “girls-designers”. These strange creatures of both sexes can do anything - and an American tank on a huge exhibition poster at an exhibition in Nizhny Tagil, instead of a T-90C, and a Victory Day poster, stick a Fritz in steel-helmet, tossing a "beater". And instead of American ships in the United States portray our. Maybe there someone from this tribe bothered? But such nonsense with figures and images in the official publication raises even more doubts. 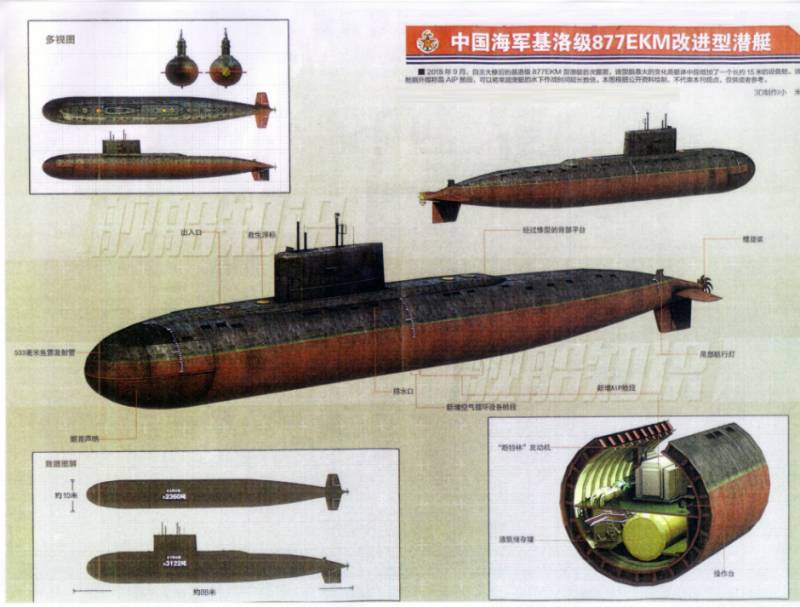 Here is a picture of the Chinese official publication.

In addition, recently, regularly published satellite images of commercial Earth remote sensing satellites from Chinese naval no bases of "Varshavyanka" with an insert were found. First of all, it is not in Hainan, where boats of this type are mainly based. The Chinese value the boats of Project 877EKM, Project 636 and 636M, because even the Yuan-type submarines developed with our help are inferior to our submarines in terms of noise characteristics (which, of course, is officially denied by the Chinese). In general, if it existed, it would certainly have been "lit up" somewhere. But there are no other photos of her, no satellite images. Except for one photo, where the boat allegedly stands in the base, but ... on it, from somewhere, the horizontal steering wheels suddenly appeared. Which are not on our diesel-electric submarines, the exception is pr.677 / 06771 "Lada". And he was not on that original image of "Varshavyanka" with an insert. At the same time, in that photo on the boat, you can see the removed front horizontal rudders, which, of course, are on our "Varshavyankas". The conclusion is that this supposedly shot was taken by some semi-literate schoolboy, student, or someone else in China who does not know that there are no three pairs of horizontal rudders on modern boats. The victim of Photoshop is the original frame from which this began. история with diesel-electric substations pr.877EKM with VNEU. If in China they conceived such a modernization, then no one has yet accomplished it with these boats. 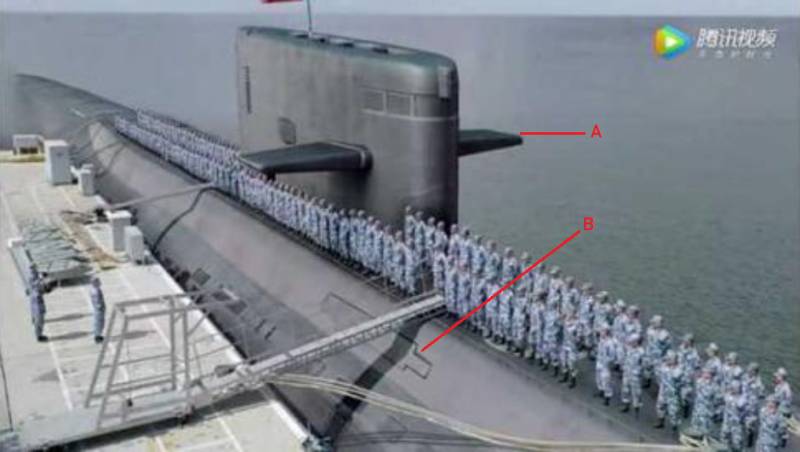 In principle, the reader will say, the story is not worth a damn. You never know who got it with a little straight hands - it's the XNUMXst century, it's time to get used to the fakes. But when fakes are published in official publications, this, of course, is strange. Although it is understandable - no one has canceled the misinformation, it just turned out too clumsy and stupid. But it's not only that. Around the Chinese achievements, imaginary and real, there is a huge pile of such "information" of a garbage character, moreover, circulated not only by crowds of Internet enthusiasts from the Middle Kingdom, but also by quite official media. Moreover, fakes are often combined with completely shameless advertising of their weapons and military equipment with completely "phonon" characteristics. This has only recently been observed, for example, at an exhibition in Zhuhai. There were many examples of such. Of course weapons a business without advertising (and sometimes very shameless) is generally impossible, and almost everything is being lied about or not talked about and quite a lot. But when lies become a lot, they simply stop believing in him at all. More carefully, dear Chinese friends.

Similar "information" is spreading about nuclear missile programs. Why, I see. Under the conditions, in general, when the real form of the Chinese nuclear missile forces is still clearly worse than the one you want to have and portray for potential opponents and the main trading partners from overseas so far, you can try to cover up the bottlenecks with a pile of inaccurate information. But misinformation must be clever, and the enemy will not bite at it.