Successes and Problems of the Homing Bullet

2 2012 June
18
At the beginning of this year, the general public discussed news from the US Sandia National Laboratory. According to a press release, several years of work and the cost of millions of dollars in 15 led to the start of tests of a revolutionary ammunition. American engineers have created a practically applicable bullet, equipped with its own guidance system. 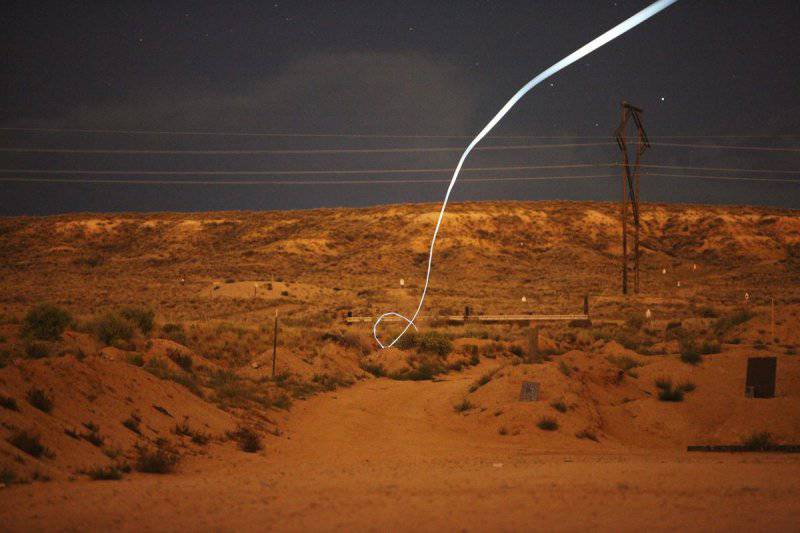 Previously, only some of the parameters of the new development were known, such as an approximate bullet length of about four inches, a firing range of about two kilometers and a number of other details. For example, Sandia Laboratory representatives repeatedly emphasized that the new bullet is intended for use in a smoothbore weapons. There were no official statements about the prerequisites for a smooth trunk, but experts immediately found the reason. The fact is that the new homing bullet does not have its own engine and moves only due to the energy of the powder charge. Accordingly, giving the bullet rotation in the barrel “eats” some part of the speed and, as a result, reduces the effective range. Representatives of Sandia, however, did not comment on this assumption.

Recently, the Laboratory published the news of the completion of tests of the first version of the homing bullet. Over the time since the first news, it has not undergone any major changes. True, this time the engineers did not limit themselves to a few numbers, and even became generous with the ammunition layout. So, in the nose of the bullet is placed the receiver of laser radiation, and the entire central part of it is occupied by the control equipment and the power source. A small, small-capacity battery supplies electricity to control chips that receive data from the sensor and generate commands for the steering machines. The latter, in turn, set in motion small steering surfaces. They can be seen in the back of the bullet - these are peculiar ridges. The system used in the pool is able to correct the flight direction to 30 once a second. At the same time, due to the peculiarities of the location of the rudders, the bullet cannot lay serious maneuvers. However, this is not necessary: ​​the task of the designers from the Sandia laboratory was to create a bullet that could hit the target, being simply shot at it. 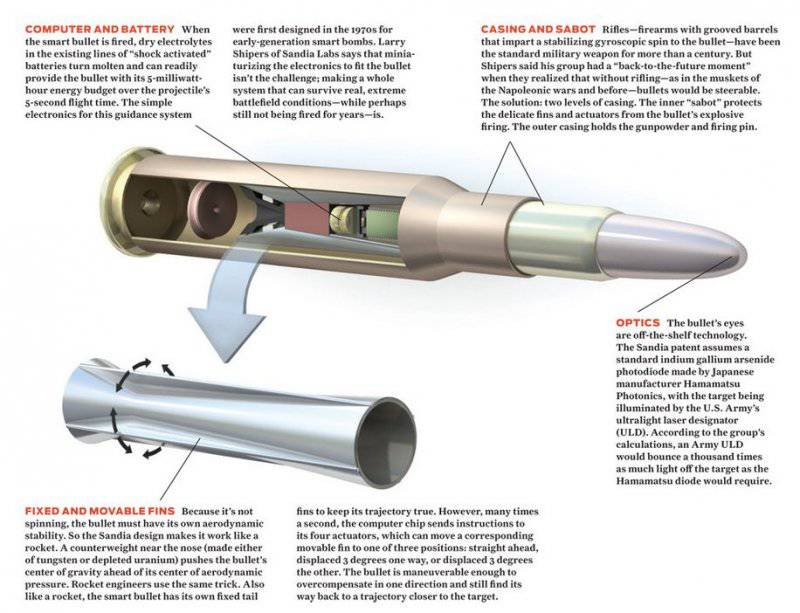 As a result of testing and improving electronics, the new bullet is said to have greater accuracy at 98% at a distance of 2000 meters than standard bullets of the same caliber. At smaller distances, self-guided munitions have about the same advantages over unguided ones. As they say in Sandia, this is not the limit. After completing the tests of the first version of the guided bullet, American engineers have the groundwork to start work on an updated project modification. The second iteration of the program should lead to an increase in the firing range and an improvement in accuracy and accuracy. The fulfillment of such requirements looks quite realistic and some statements by the Laboratory management only confirm this. According to the manager of the new technological systems of the laboratory Sandia L. Schippers, the bullet electronics in the current state can transfer overload to 120 thousand units and pressure not less than 340 megapascals. This means that the self-guided bullet can be used with cartridges up to and including 12,7x99 mm. In the future, the staff of the National Laboratory plans to make several options for self-guided bullets of other calibers.

An interesting fact is that over the past few months, despite the progress in technical and constructive terms, Sandia’s wishes regarding the economic side of the project have not changed. Laboratories still need a source of funding. For some unknown reason, the main customer in the person of the Pentagon does not show proper interest in the homing bullets and is in no hurry to carry out such financing, which is required by the developer. Of course, official information about this was not published. There is a plausible version that says that the millions of dollars already spent on the 15 program do not look like a normal price for just finished tests. Accordingly, new public investment in the project is still under question. And this, it should be noted, is very interesting: the most likely user of a new development is in no hurry to invest in its creation.

As a result, at the moment, the promising program is undoubtedly in a very precarious situation. If further events develop not in the way that the Sandia laboratory workers would like, then there will be no bullets of other calibers. And the very idea of ​​a homing bullet risks for the time being an exclusively technical curiosity.