Gods of war in the Donbass. Part of 1

November 17, 2018
57
To begin the narration about the artillery of the Ukrainian Armed Forces has to be based on the traditional thesis about the general low level of personnel training and the unsatisfactory state of the guns. From the very beginning, the notorious anti-terrorist operation in the army were called artillerymen-reservists, who in many ways poorly versed in this kind of troops. There were even facts of non-combat casualties among personnel before the outbreak of hostilities. So, in March 2014 of the year at Perekop, due to negligence, the Msta-S self-propelled gun was detonated, and in May of the same year another self-propelled gun was lost. 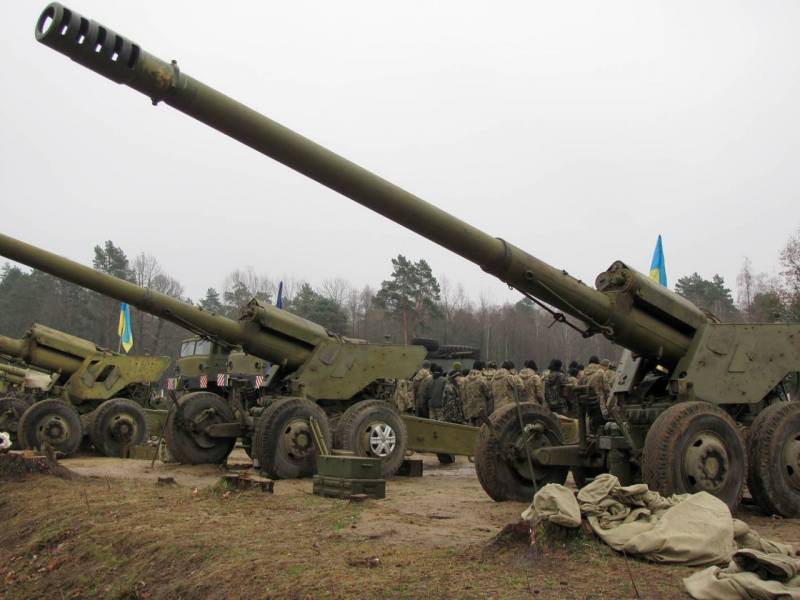 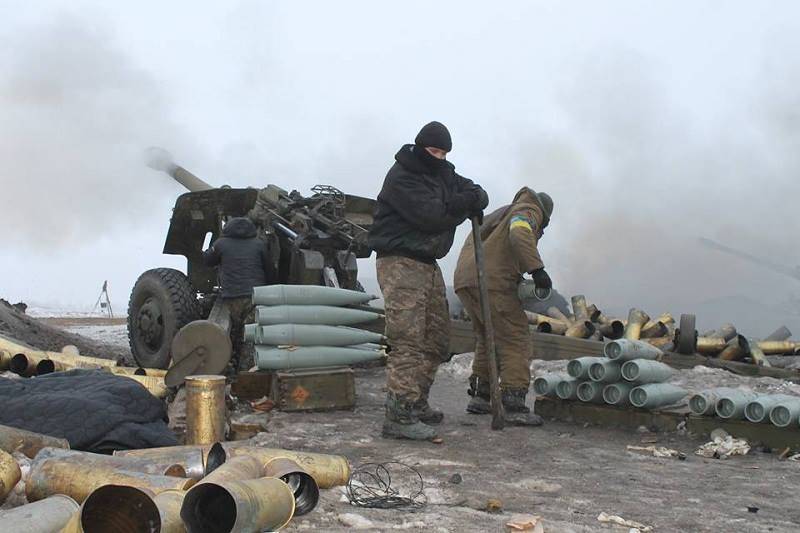 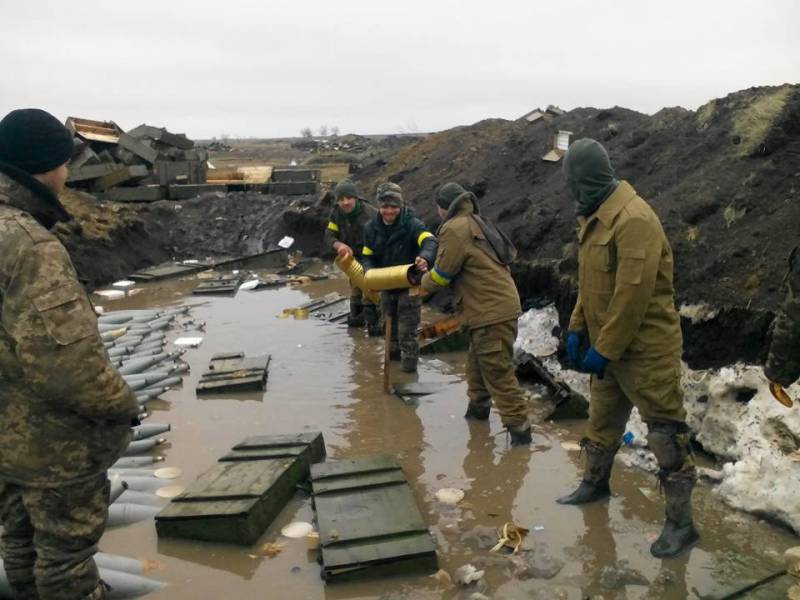 "Baptism of Fire" on a large scale, if I may say so, the artillery of the Armed Forces of Ukraine received in the battles of Slavyansk. She worked on the militia and civilians as a barrel and rocket artillery, which, in fact, proves the indiscriminateness of the Ukrainian army in striking. The artillery divisions of the 55 artillery brigade named after Colonel-General Vasyl Petrov, who was later given the name "Zaporizhian Sich", distinguished themselves the most. The brigade consisted of five divisions: 3 howitzer (2А65 "Msta-B"), anti-tank (MT-12 "Rapier" with ATGM) and reconnaissance. Separately, it is worth mentioning that the Ukrainian military command never used the entire Vasiliy Petrov artillery brigade - most of the divisional scale was involved in the shelling.

The response of the Donbass militia to massive shelling as early as July of 2014 was a methodical and well-controlled counter-battery struggle. The 55-mentioned brigade under Krasny Liman came under such a return fire and for one raid immediately lost 6 howitzers "Msta-B". 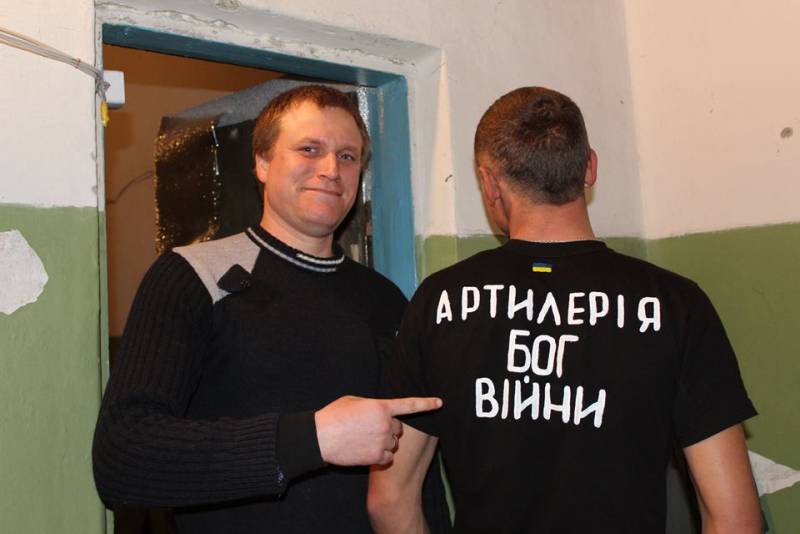 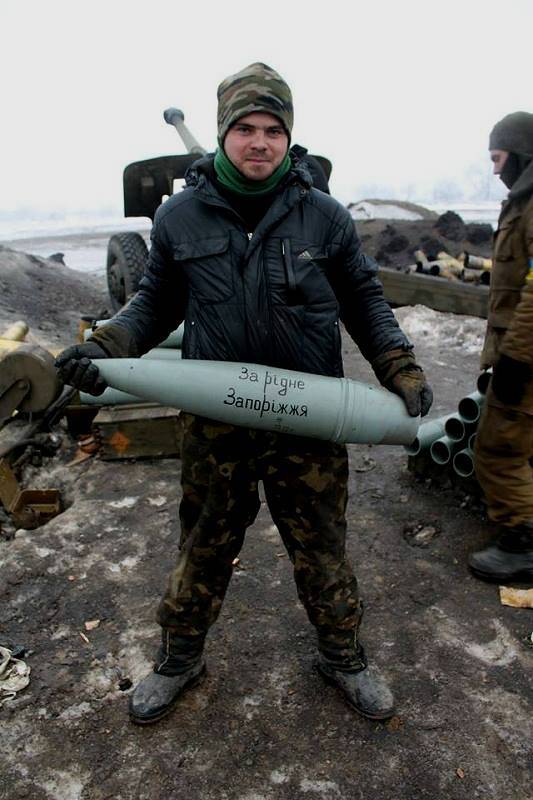 As is known, the command of the Armed Forces of Ukraine for the needs of the “antiterrorist operation” was not ashamed to send into battle heavy vehicles like the MLRS 9K58 “Smerch” of 15 units (base in Drohobych in Lviv region) and 107 of the Kremenchug rocket artillery regiments. The last regiment was actively used in the districts of Kramatorsk, Artemyevsk and Debaltseve, often shelling the militia with openly “stale” missiles — a lot of ammunition remained to stick out of the ground unexploded. However, now the command of the APU pays special attention to just rocket technology. Defense engineering engineers are busy testing and adopting guided munitions (apparently GPS) for Smerch under the name Alder. Ukrainians made the first shots of Alder back in 2016, and Turchinov liked them very much, who said: “... unlike Russian counterparts, Ukrainian missiles are guided, and that’s why they hit targets more efficiently and more precisely, which was proved during the tests” . The works on such an important project for the Ukrainian Armed Forces are coordinated by the Luch Kiev State Design Bureau. 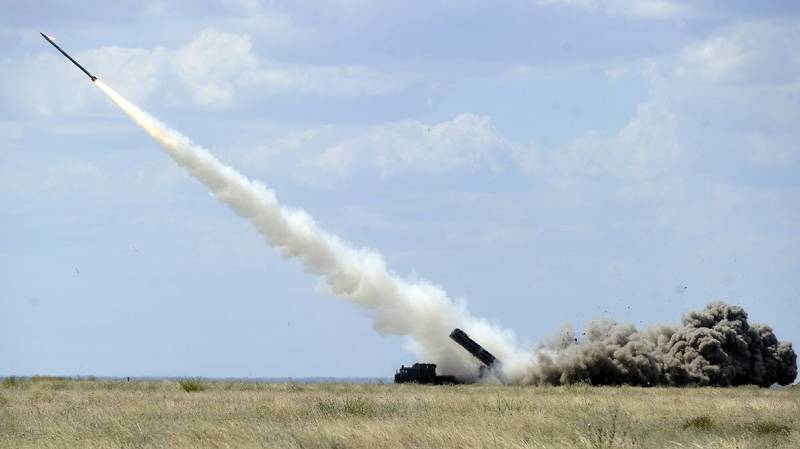 One of the first results of statistical calculations showed that by March 2016 of the year, for various reasons, the Smerch 13 combat vehicles were disabled. How many of them went to the next world for non-combat reasons? Statistics is silent.

Sumy 27 th rocket artillery regiment is, in its own way, a unique unit of the armed forces of Ukraine. In fact, only they had an "intermediate" MLRS 9K57 "Hurricane" caliber 220 mm. The regiment has a very textured and formidable name - “Sumy Boar”, which, however, did not protect them from very serious troubles.

Testimony of volunteer Pavel Narozhny involved in 27 ReAP maneuvers:
“March 1 (2014 of the year) the regiment in full brought out to Mirgorod, after all from Sumy to the border with Russia the whole 34 kilometer. There is a video of how they were driving ... in the literal sense of the word, the technique on the road crumbled. In early June, we hired several specialists at the Frunze Machine-Building Plant, who, after taking a vacation, went to repair military equipment. We worked all June so that the batteries could go to combat positions without any problems. And our mechanics could make a unique thing. In "Hurricanes" a platform is used, which is not available on any other jet installation - ZIL-135 LM. If even the slightest failure in the engines, the car just starts throwing them side to side. There is a special Russian-made electronic unit that synchronizes the operation of these engines. We have no such units in warehouses, but Russia, it is clear that they no longer supply them. These blocks are non-separable - soldered, and our electronics engineer Vladimir Sumtsov was able to cut it and find the element base. So, he is now repairing these units ... at home. "

It remains to hope that the level of military-technical service of the Armed Forces of Ukraine remained at the same level now. Further Narozhny complains:
“The main problem: the platform for the transportation of artillery installations is ZIL-135LM. There are two engines with a total horsepower 250. They eat 150 l on 100 km. On the modern engine for 150 l can make 1000 horses. Moreover, this technique is hopelessly outdated. ” 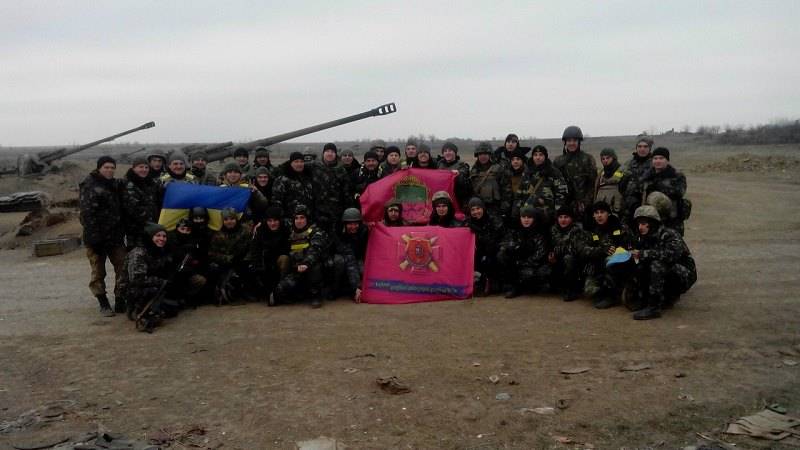 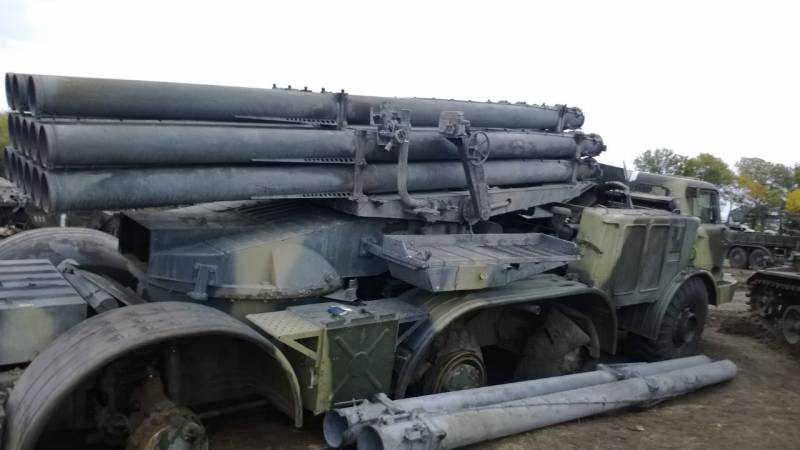 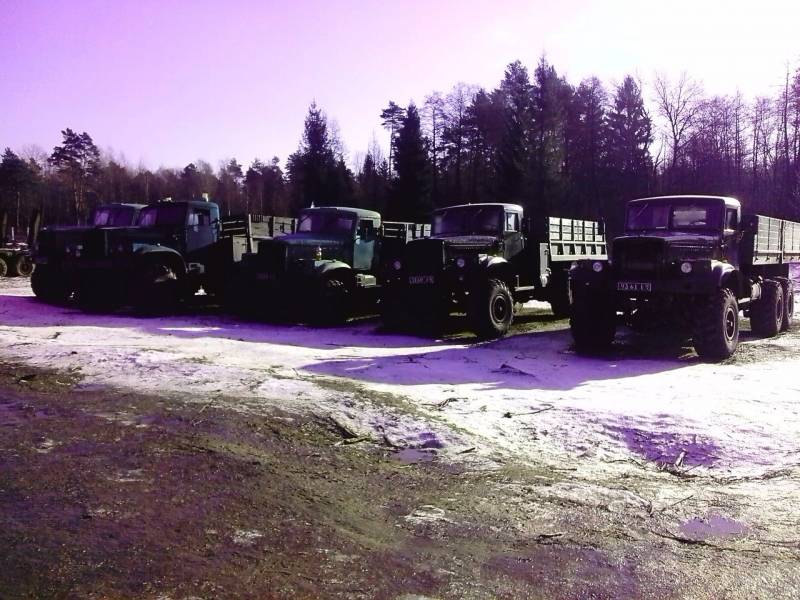 They threw "Hurricanes" 27 ReAP batched across virtually the entire front, plugging their hot directions. Valery Ismailov, a regiment, said: “Geographically, the units of our regiment are located along the entire contact line and act in all directions: Mariupol, Debaltsevsk, Donetsk, Luhansk. Virtually all units of the regiment are working, including now, on the hottest destinations that everyone has heard. ” The militia often suffered sensitive losses from such powerful artillery, which, among other things, was sufficiently mobile. 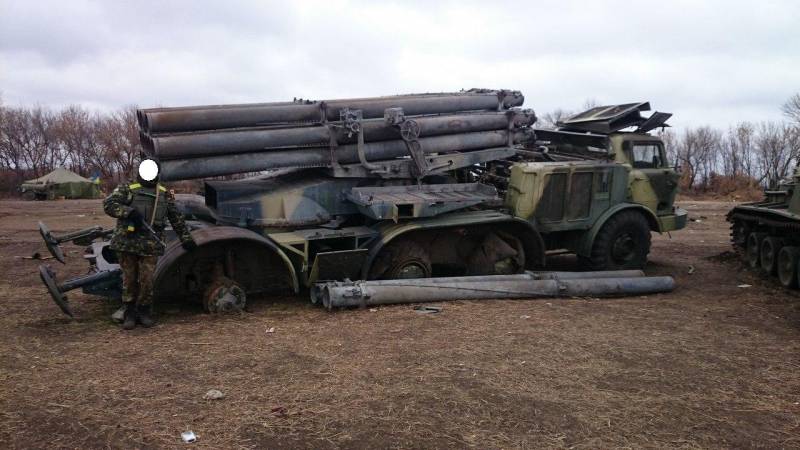 For this reason, 27 ReAP units became the priority targets for the artillery of Donbass defenders. The story of the soldier of the Ukrainian Armed Forces of Ukraine Sergey Romanenko about the experienced horrors is very remarkable:
“For three days enemy drones were constantly circling over us. The anti-aircraft gunners fired a lot of ammunition for them from the Tunguska, but to no avail. September 3 we were ready all day, as 72 hours for the ultimatum about the unconditional surrender of positions and technology have already passed. And in 19: 20 started. Immediately realized that this is not "Grads" and not "Hurricanes" are shooting at us. In just a few seconds, most of the personnel were already in dugouts. The soldiers, who were in the hangar with the equipment, died immediately: the missile hit the center directly. Somewhere near the dugout, where, besides me, there were still 11 servicemen, a missile exploded. Something banged in my head - I went blind and lost my hearing. After some time, the vision returned. Then I realized that I was covered with sandstone on the shoulders. Probably saved that did not lie, and was located half-sitting. Slowly began to dig himself. Everything around me was burning and exploding. Apparently, after the shelling, our Hurricane missiles and SAU ammunition, which were nearby, detonated. Explosions were interspersed with human screams. First I dug up Major Pavel Pogorelov. He was conscious and called me himself. The shovel was not at hand, so I had to work with my hands. He said he was choking. But everything worked out. Freeing the body to the knees, I realized that the officer would live. Armed with a flashlight (it was already dark), I began to look for other soldiers. ”

Worked in units of the army of Ukraine BM-30 "Smerch". The militia ultimatum was not adopted ...