The complex of heat-thermal artillery reconnaissance 1B75 "Penicillin"

October 29 2018
17
For effective work artillery needs various means of reconnaissance. With their help, it is necessary to control the results of the shooting, as well as to determine the location of enemy batteries. Now, to solve such problems, specialized radar stations are used, capable of tracking the flight and hitting projectiles or missiles. In the near future, reconnaissance artillerymen will have to start operating a new reconnaissance complex using other detection methods. Perspective automated complex 1B75 "Penicillin" is capable of performing all its tasks by processing audio and visual information.


Now the main contribution to the work of artillery reconnaissance is made by specialized radar stations. They are able to track the flight of their own and enemy shells, determining the point of their launch and fall. Identifying the point of impact of your projectile allows you to adjust the tip of the guns to successfully hit the target, and information about the location of the launch of the enemy is intended to organize a retaliatory strike. Intelligence radar cope with their tasks, but not without flaws. First of all, they are subject to negative effects of EW agents or shocks using anti-radar weapons. 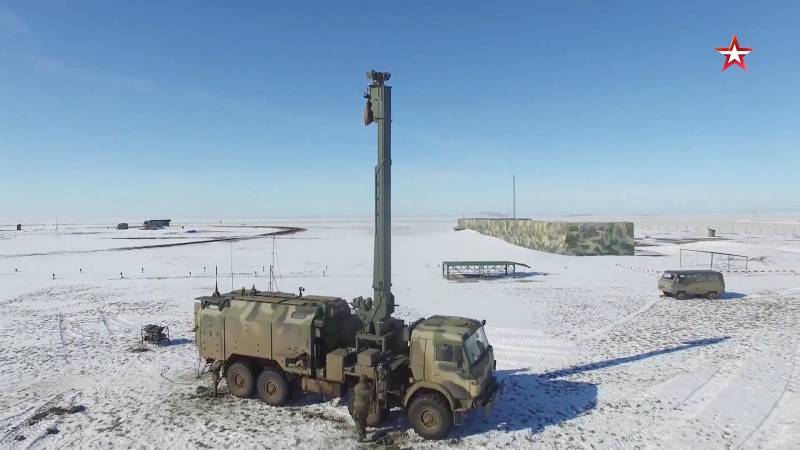 In the distant past, special acoustic systems were used for direction finding of firing positions and places of falling shells. As it turned out, the use of sound vibrations and visual information is quite capable of finding application in modern conditions. However, now we are talking about other principles for receiving and processing data using a modern component base.

Several years ago, experimental design work was launched in our country with the Penicillin cipher, the purpose of which was to create a fundamentally new automated sound-thermal complex (AZTK) of an artillery reconnaissance army level. According to the technical requirements, information about flying and falling projectiles should be collected using seismic sensors and infrared cameras. The use of radar tools was excluded.

Development of the project "Penicillin" was carried out at the Research Institute "Vector" (St. Petersburg), which is part of the group of radio engineering "Vega" (a division of "Rostec"). Other enterprises of the industry could be involved in the work. In the near future should start mass production of products; it was planned to entrust it to the enterprises of the Russian Electronics holding (also part of the Rostec state corporation).

For the first time, the existence of the new AZTK 1B75 "Penicillin" was told to the general public in March of the 2017 year. By this time, the enterprises participating in the project had time to complete the development of technical documentation, and also built a prototype of the complex. Also, tests were started on one of the ranges of the Russian Ministry of Defense. These circumstances allowed the military department not only to tell the public about the promising development, but also to show it in action. However, the main part of the data about the new complex of intelligence was not subject to disclosure. 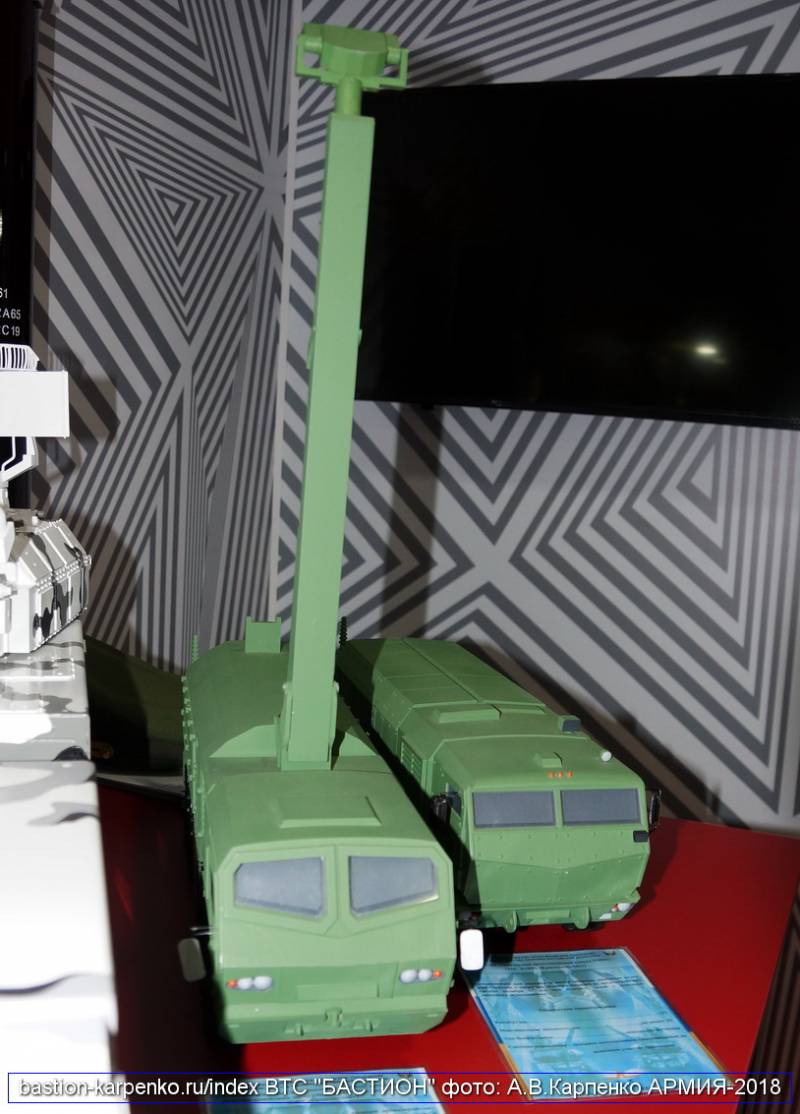 Model of the complex at the exhibition "Army-2018"

In May last year, representatives of "Roselectronics" clarified information on the "Penicillin" project, and also announced some new information. In addition, the latest news and plans for the near future. It was reported that at that time the product 1B75 completed state tests. In the near future, it was intended to carry out the required procedures, after which it was possible to start mass production. The start of the assembly of serial complexes is scheduled for the beginning of 2019 of the year.

Subsequently, materials on the AZTK “Penicillin” project, including a mock-up, were shown at the “Army” exhibition. It is curious that the models shown this year were markedly different in appearance from the prototypes that were tested and became the “protagonists” of news from last spring. Nevertheless, the overall architecture of the complex, its functions and capabilities remained the same.

1B75 Penicillin, an automated heat-thermal artillery reconnaissance system, is a mobile self-propelled chassis system that can monitor the situation in a given area and detect the work of the enemy’s guns or monitor the accuracy of their artillery. Due to the use of fundamentally new ways of working, the complex solves its tasks without unmasking itself with any radiation. All the main instruments of the complex, with the exception of communications, operate exclusively in the receive mode.

Prospective AZTK is built on the basis of the automobile chassis with the corresponding characteristics. So, the prototypes tested last year were based on the KamAZ-63501 machine. This year, the exhibition showed a model of a reconnaissance complex based on a different chassis. Available data suggest that Penicillin equipment can be mounted on base cars of different models. Only the load capacity and dimensions of the load area are important. 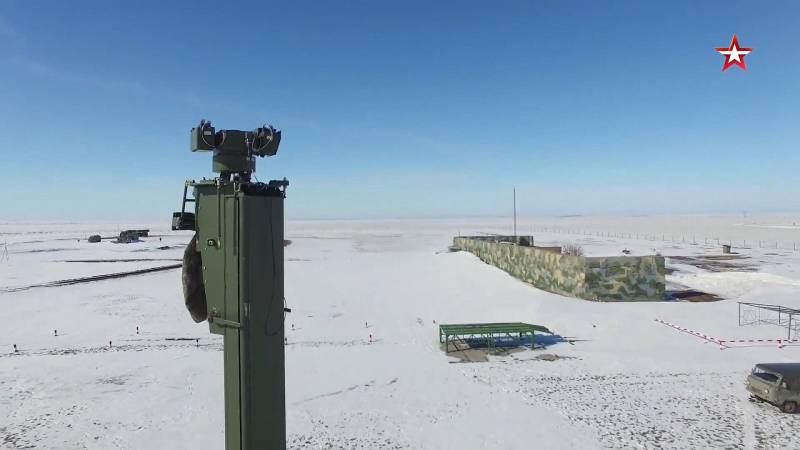 The prototypes were built on the KAMAZ-63501 chassis. It is a four-wheel drive all-wheel drive vehicle designed for mounting various target equipment or other payloads. The machine is equipped with a hp 360 diesel engine. and is capable of carrying a total weight of up to 16 t on the frame. The maximum speed on the highway exceeds 90 km / h, regardless of the type of payload.

In the case of "Penicillin" on the chassis, behind the cab without a bonnet layout, a new unit is being mounted, including a mast device support and a box for storing special devices. Behind it, a unified bodywork box is set up to accommodate workstations, special equipment, etc. Also, the chassis is equipped with four hydraulic jacks. A pair of such devices is located next to the special equipment, the other two - in the back of the machine.

One of the intelligence tools is the Penicillin-OEM opto-electronic module. It is a stabilized platform with several cameras of several types, mounted on a lifting mast. In its current form, the 1B75 complex is equipped with a lifting mast. When the complex is moved to its working position, the mast rises vertically, leading the cameras to the required height. In the stowed position, the mast is laid back on the roof of the van. The platform with cameras is equipped with drives of vertical and horizontal guidance, providing a circular view of the azimuth and change in elevation.

Penicillin-OEM includes at once six television cameras and the same number of thermal imagers. They are placed in two box-shaped cases fixedly movable on a common rotary base. Both housings have mechanized front covers that protect the optics from damage during transport. Television and thermal cameras have an angle of view 70 ° in azimuth and 10 ° in elevation. The signal from all 12 devices simultaneously arrives at the computers and is processed together. At the same time, a high quality of “stitching” of individual visual fields is ensured. The camera can be operated continuously for 18 hours, after which a break in 1 hours is required. 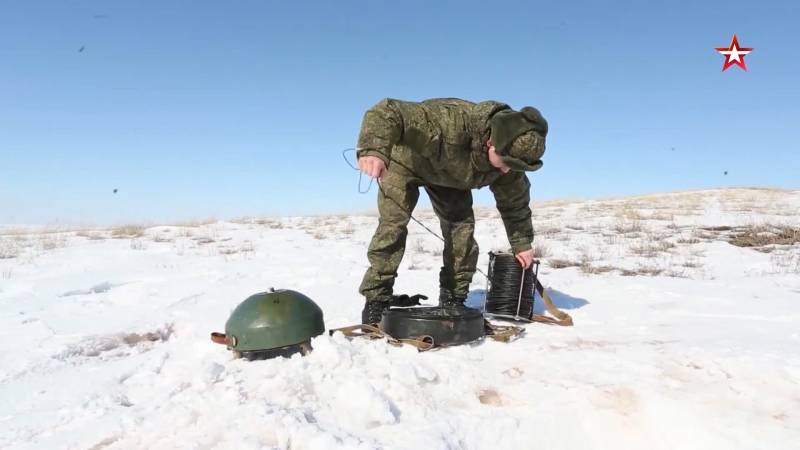 With the help of the “Penicillin-OEM” module, the artillery reconnaissance complex should monitor the specified sector and detect the outbreak of shots or shell explosions. By processing data from a set of cameras, automation is able to accurately determine the direction to the flash point. Calculation of data on the found gap is carried out in real time.

The complex of heat and heat intelligence also has the means to receive and process audio signals. The complex includes four devices for collecting acoustic signals, as well as equipment for their processing. The receiving device is a product with a body with a characteristic curved shape. These devices are proposed to be placed at certain positions near the complex and connected to it with the help of cables. The main element of the receiving device is a seismic sensor that receives ground vibrations and converts them into an electrical signal.

A shot from an artillery piece or a projectile break creates a sound wave in the ground that extends over considerable distances. Receivers "Penicillin" capable of detecting this wave, after which the automation performs the necessary calculations. The special arrangement of the four seismic sensors leads to the reception of oscillations with one or another delay. The difference in the time of arrival of the signal allows determining the direction to the source of oscillations, as well as the distance to it. Apparently, audio reconnaissance tools can be used together with optical, which significantly increases the speed of the calculations and the accuracy of determining the coordinates of the instrument or the place of the fall of the projectile.

According to published data, AZTK 1B75 "Penicillin" is able to detect firing positions or places of falling shells in the area up to 25 km in width along the front. The detection range of the enemy’s mortar reaches 10 km, other types of barreled artillery are 18 km. High detection accuracy is ensured: up to 1,5 angular minutes in azimuth. The calculation of the location of the source of sound waves or infrared radiation requires all 5 with. Regardless of the conditions and intensity of the work of artillery, the complex can find at least 90% explosions or shots. 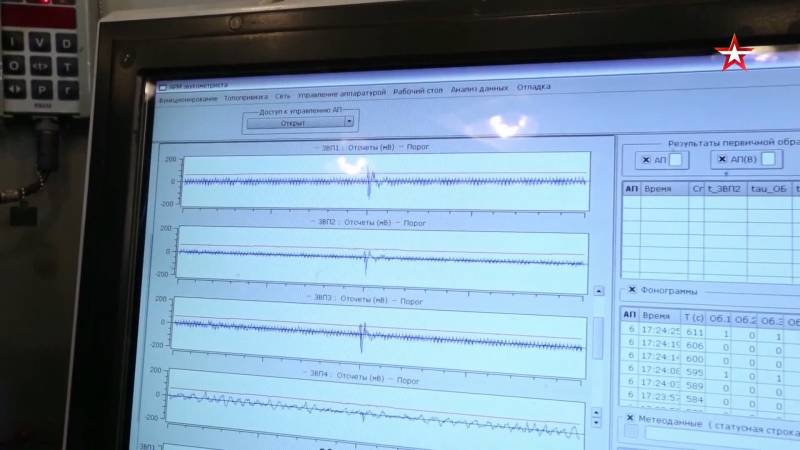 Data from seismic sensors on the screen of the operator's workstation. Photo: TC "Star"

With the help of standard means of communication, Penicillin is able to interact with artillery formations. It can work in the mode of the spotter and determine the places of the falling of the shells, the data about which will allow the gunners to correct the tip and deliver an accurate strike. When solving counter-battery tasks, the 1B75 complex must identify the enemy’s firing positions and target the gunners for retaliation. The reception and processing of data with the subsequent release of information to consumers requires minimal time, which increases the efficiency of the artillery.

The most important feature of the new AZTK 1B75 "Penicillin" is the ability to work at some distance from the front line. In addition, it is distinguished by the absence of unmasking factors during operation. All the main components of the complex work only on reception, whereas in the transmission mode only the radio station providing communication operates. Thus, the enemy is unable to identify specific signs and take action against this complex. In this regard, Penicillin has advantages over other artillery reconnaissance devices that use different detection principles.

Last year it was reported that the automated sound-thermal complex of artillery reconnaissance of a new type is undergoing state tests and in the foreseeable future will be able to go into series. Recently, negative news about Penicillin has not been received, which is cause for optimism. Apparently, the industry has successfully coped with its tasks, and is currently preparing production facilities for future production of equipment.

What will be the order of the Ministry of Defense on 1B75 "Penicillin" for the domestic ground forces, has not yet been specified. However, the consequences of the acquisition of such equipment are already clear and obvious. New tools will increase the potential of intelligence units and at the same time have a positive impact on the capabilities of rocket forces and artillery. Missile and artillery gunners will be able to quickly and efficiently hit designated targets or defend their troops from enemy shelling.