Old men still in the case. Steel veterans of the Black Sea Fleet of Russia. Part of 1

October 9 2018
42
As a man who grew up by the sea and went sailing and on a motor, I am sad to see how honored veteran ships are sent to cut. Either this kind of Soviet upbringing makes itself felt when there were no rat races in shopping centers, or just some kind of romantic animation of the steel fighters of the open sea ... Alas, now such attachment is becoming less common - modernity makes itself felt. This is especially evident in the merchant seamen. fleetwho are tied to their ships no more than passengers to the elevator, in which they go up. For warlords, things are different, but their battle comrades are scrapped over time. 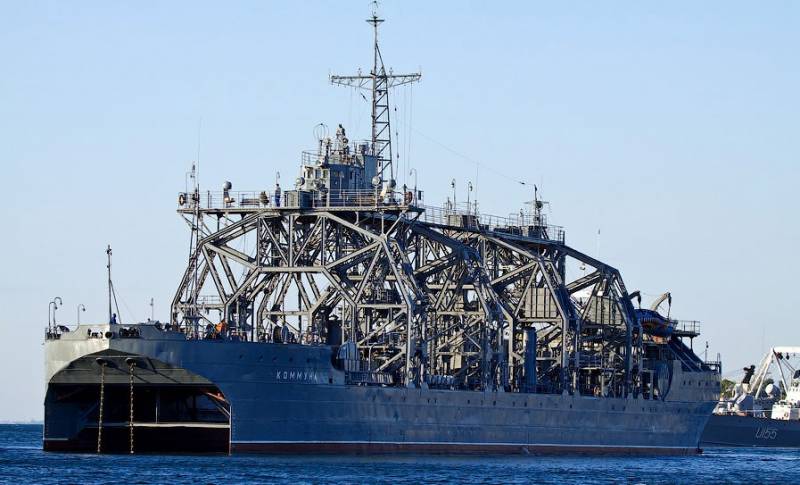 So take a look at the old men, who, despite the vicissitudes of fate and by some miracle, are still listed as part of the Black Sea Fleet. In the first place, of course, will be the rescue ship-catamaran "Commune", the project of which was developed in an intolerably distant 1911 year. A very distant prototype of the future "Commune" was the German submarine rescuer "Vulcan", by the way, soon sank in 1919 during towing to England. 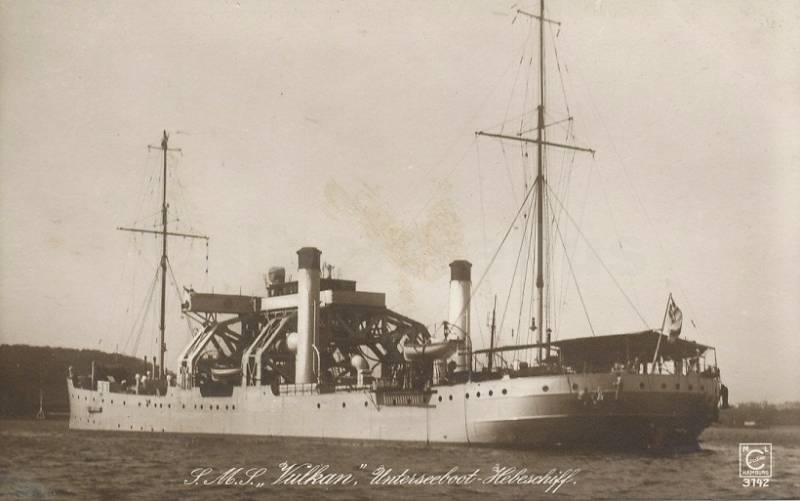 30 December 1911 of the year The Putilov factory, which presented the best design of the ship, received an order for construction from the General Directorate of Shipbuilding, and already in 1912, the assembly of the hull on the stocks began. 17 November of next year, the rescue ship, originally named Volkhov, was launched, and 14 July 1915 of the Volkhov became part of the Baltic Fleet, more precisely, into the submarine division as a floating base. 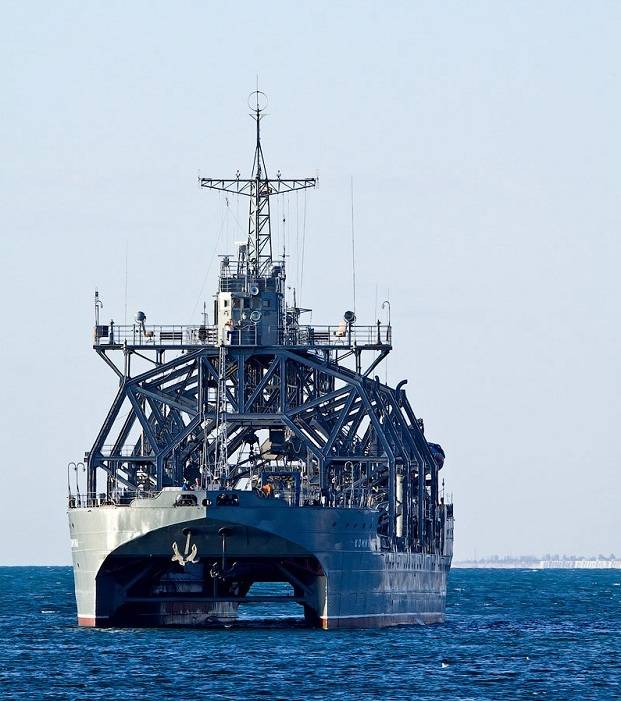 The catamaran had a displacement of 3100 tons. The length is 96 meters, the width is 18,57 m, the draft reached 3,65 m. The two ship hulls were interconnected by four 18-meter arched trusses located at equal distances from each other and connected by longitudinal beams. Thus, the submarine lifted out of the water appeared between two hulls, placed on the 12 tilting transverse beams.

Two diesel engines of the Riga plant "Felzer" with 600 horsepower allowed to reach speeds up to 9 nodes. Later they were replaced by engines of the Kolomna Plant, similar in characteristics. The navigation range was 4000 miles with fuel on board. The crew size reached hundreds of sailors, not counting submariners, for which temporary accommodation there were additional premises. 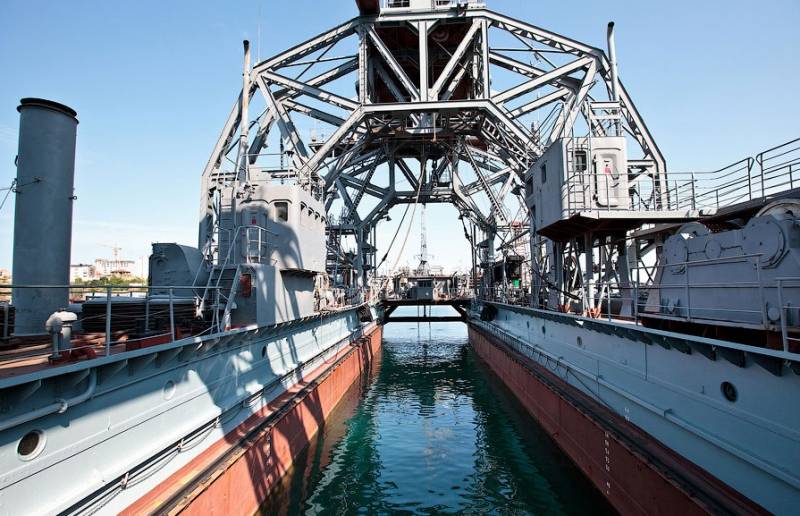 History The glorious service of the Commune, which it became by decision of the assembly of the whole crew in 1922, deserves a separate book, and not one. The rescuer raised hundreds of warships and civilian ships, submarines and even airplanes, starting with 17, when the “Commune” was baptized, lifting the submarine AG-15.

But the most important mystery of the "Commune", oddly enough, is its amazing resilience and safety. More precisely the safety of his steel body. Moreover, in 2015, scientists from the research and production organization of the rocket and space industry for the creation and use of Composite materials investigated Putilov steel Kommuny. Despite the fact that scientists were amazed by the absence of a trace of corrosion on the ship's hull, for a long time they could not give an answer. As a result, it was found out that corrosion is absent due to the presence on the metal surface of a hardly soluble dense oxide film that prevents aggressive media. However, the question of how and with the help of which technology Putilovtsy managed to do such a delicate and science-intensive work has not yet been answered.

However, the legendary “Commune”, which is still in the fleet and is actively involved in rescue work, is not so alone in its retirement age. Of course, the glory of the catamaran rescuer was not found by their peers, but they served our fleet with faith and truth, often completely imperceptible. 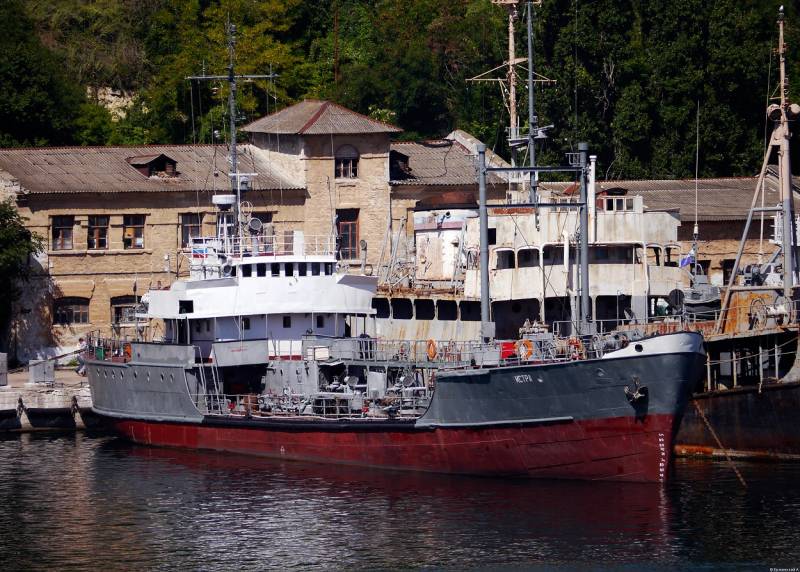 One of the most exploited auxiliary vessels of the Russian Black Sea Fleet is the small sea tanker Istra, which this year has made as many 77 years. The contract for the construction of the vessel was concluded between the shipyard and ... the German Navy. Yes! “Istra” is a trophy ship. In 1941, a tanker under the name “Else” left the stocks of the DW Kremer Sohn plant in Elmshorn.

Displacement was 1200 tons. Length - 61 meter, width - 9 m, draft - 2,75 m. Two diesel four-stroke engines allowed to go full speed 12 nodes. Sailing range was 1200 miles. Naturally, based on the tasks of wartime, the tanker was armed. He carried on his board two 20-mm anti-aircraft guns, which are ship modifications 2 cm FlaK 30, as well as two machine guns. The crew consisted of 6 officers and 20 sailors. 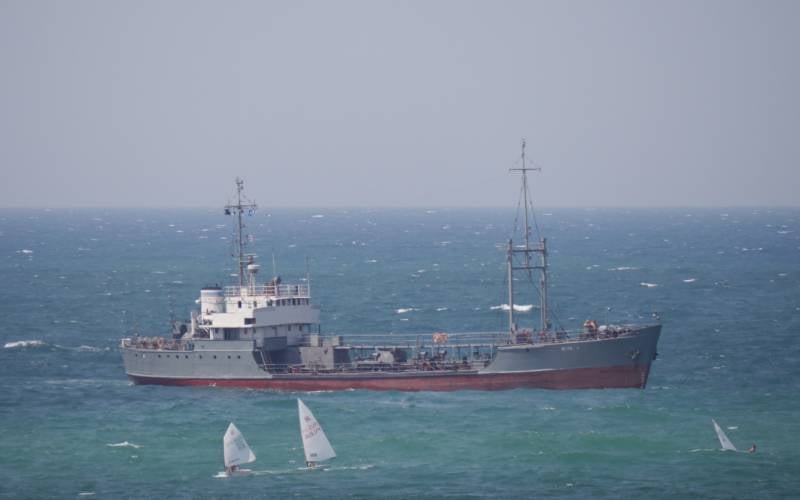 Since 1941, the tanker Elsa was based at Swinemünde, making flights with fuel to Oslo, Copenhagen, Trondheim, Narvik, etc. In 1945, British troops seized a tanker just in Norway in Trondheim and immediately incorporated it into the British Navy under the name Empire Tigina. However, later, according to the conditions of reparations, they were forced to transfer it as a trophy to the USSR. Immediately after receiving the tanker in 1946, he was transferred from the Baltic to the Black Sea Fleet in Sevastopol. For some time the ship was transporting oil products under the furious name NT-3. Only in 1948, by the order of the Commander-in-Chief of the Navy, did the tanker get its name “Istra”. 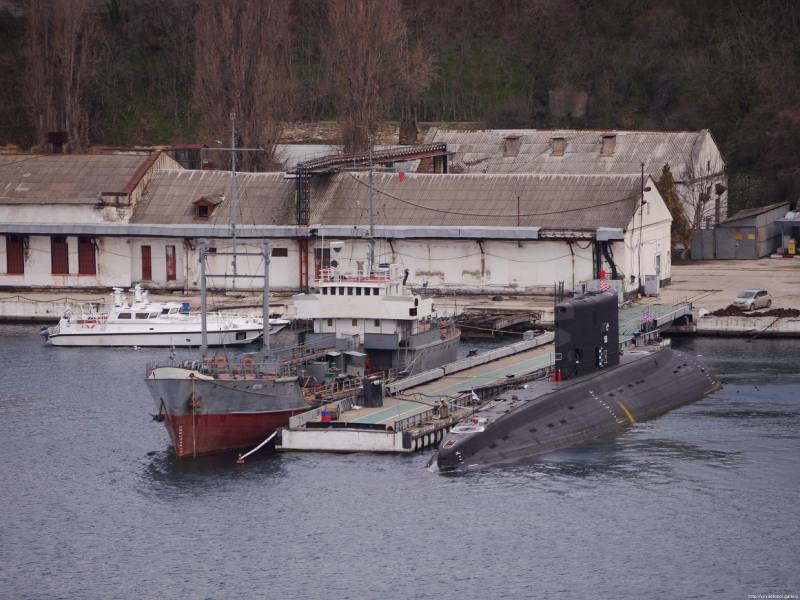 This modest hard worker during his career has passed not just one hundred, but even millions, nautical miles. The tanker transported both gasoline and technical oil, and even aviation kerosene, when aircraft-carrying ships were introduced into the fleet. During the service "Istra" made trips in the Black, Azov and Mediterranean Seas, calling at the ports of Alexandria, Split, Varna, Durres and others. And from 57 to 58 years, the vessel provided the functioning of our ships and submarines in the Albanian Durres during the provision of international assistance to the NRA. In 1992, Istra participated in the evacuation of refugees from the Georgian-Abkhaz conflict zone. 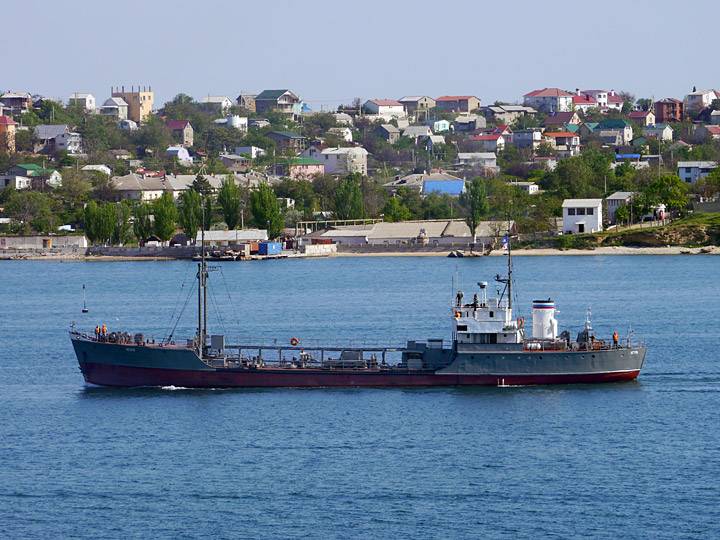 Despite its more than venerable age - 77 years - Istra is still in operation and is actively operated, transporting fuel and oil for warships of the Black Sea Fleet every day. The mystery of his vitality and longevity is that Tanks vessels are enameled and practically not susceptible to rust. At the moment, Istra is part of the 205th detachment of supply vessels of the Russian Black Sea Fleet. 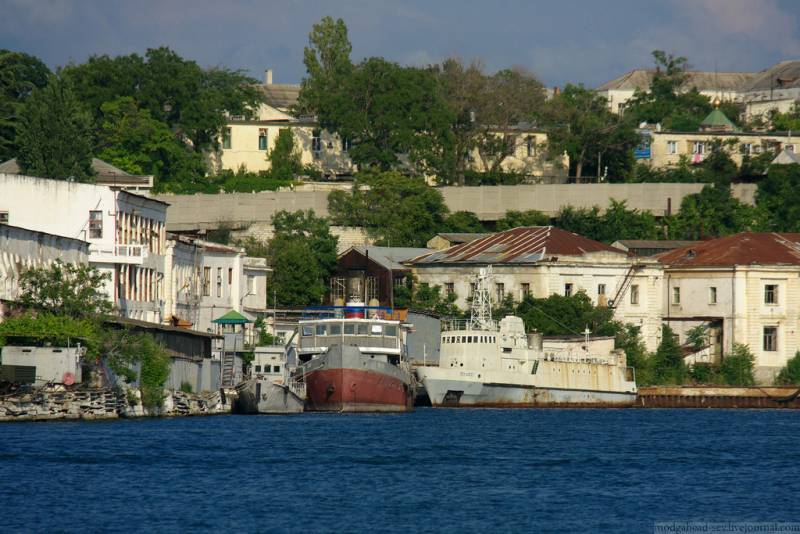 And now we will get acquainted with one of the oldest ships of the Black Sea Fleet, which is second only to Kommune. This is a sea tug "SP-10", and now "OT-463". The tug was laid at the Sevastopol Marine Plant named after Sergo Ordzhonikidze in 1939 year, and the following year was not only launched, but also put into operation as part of the Black Sea Fleet support vessels. Displacement was 680 tons. Length - 39 meters, width - 8,2 m, draft - 3,5 m. The power plant in 800 hp provided speed in 12 nodes. Sailing range reached 2600 miles. Crew - 31 man. 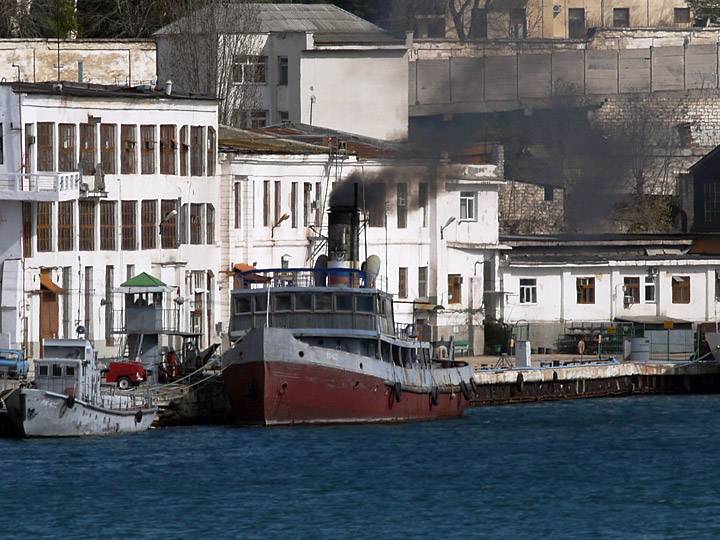 During the defense of Sevastopol in 1941-42, the tug was armed with two machine guns and one 45-mm gun and ensured the fleet's combat activities, as well as carried out combat raids. In 1942, after the Black Sea Fleet, it was transferred to the Caucasus, and in 43, it received the tail number of the Black Sea Fleet-4. October 19 1944, the tug's career could end. The vessel, while towing a water-filled barge along the seemingly protracted Inkerman site, nearly hit a mine when approaching the boom gate. Literally a hundred meters from the tug, a German maritime surprise exploded. The ship received minor damage and soon returned to service. 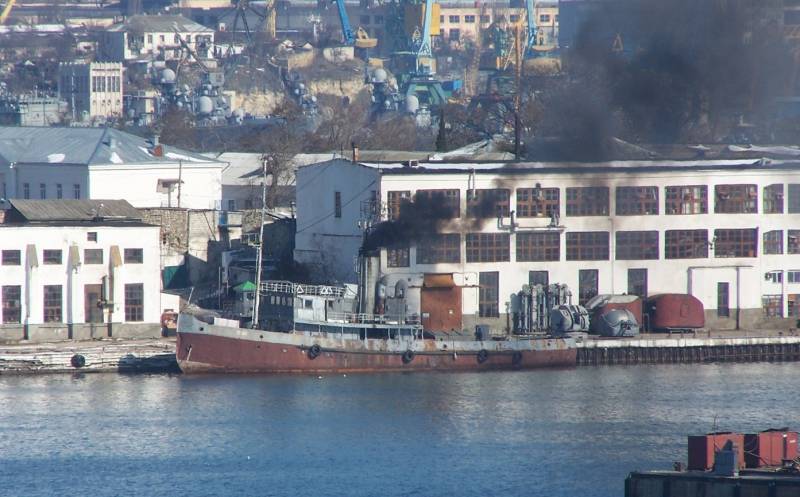 Since 1949, the tug has received the MB-40 board number and continued its service in Sevastopol. In 1978, the ship, which was already archaic at that time, was excluded from the fleet. However, instead of a sad fate to go for scrap metal, the tug was retrained in the heating station under the name "OT-463". The vessel became docile at the pier and provided the factory premises with steam at the right time and some ships in winter. In 2008, the dock repair was even passed and returned to its rightful place - a pier in the territory of the repair and artillery plant in Sevastopol. True, it should be noted that the honored hard worker in 90-e wanted to put on the needles, but the crew defended the fleet veteran. For people who are not indifferent to the steel long-livers of the Black Sea, the author recommends to find the video of Independent Television of Sevastopol called “Floating boiler house” dedicated to “OT-463” on the web. 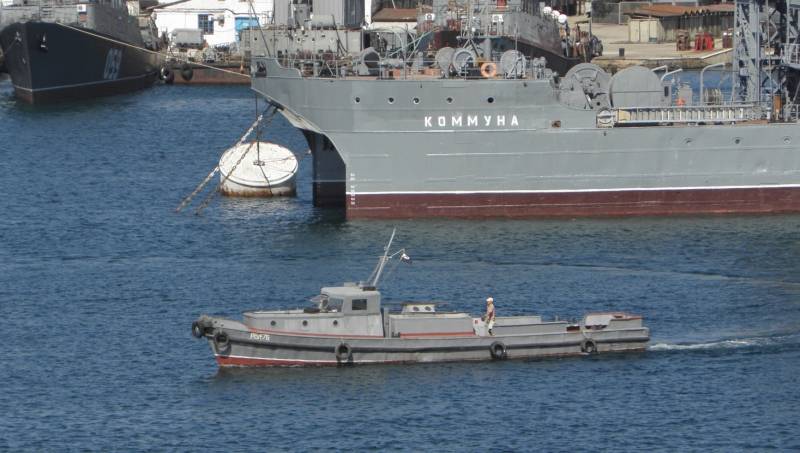 A special fate befell the raid launch "RBC-76". Barkas is a German trophy raid boat, launched in the distant 1942 year. In 1944, the boat was captured by our troops, and literally a month later it became part of the Black Sea Fleet. The vessel has long served in its immediate role. At the moment, the old man is part of the 280-th shield station of the Black Sea Fleet, which consists of floating target shields for training shooting. Launched based on Streletskaya Bay of Sevastopol.