Land units of the Armed Forces of Ukraine. Tactics of combat use. Ending

October 2 2018
15
Heavy mortars and cannons in caliber above 100 mm, as well as RZSO are unusually massively used in the Donbas. Multiple rocket launchers operate on average two to three times more actively than in all previous local wars. Especially popular are the Grads and Hurricanes, which are relatively easy to use for both the militiamen and the artillery of the Armed Forces of Ukraine. In addition, the advantages of MLRS include high power, mobility, as well as a huge field of destruction - up to 6 hectares. Finally, Ukraine has accumulated just huge reserves of military equipment for such artillery systems, even if overdue.


A distinctive feature of the conflict is the fact that both parties use obsolete weaponsamong which the Grads, the D-20, the entire 122-mm artillery and the 100-mm anti-tank guns are considered the most "elderly". Relatively new can be called self-propelled and towed "Msta" with "Hyacinth", "Hurricane" and 120-mm gun "Nona". The most "young", perhaps, is the most powerful "god of war" of the Donbass - RZSO "Smerch". 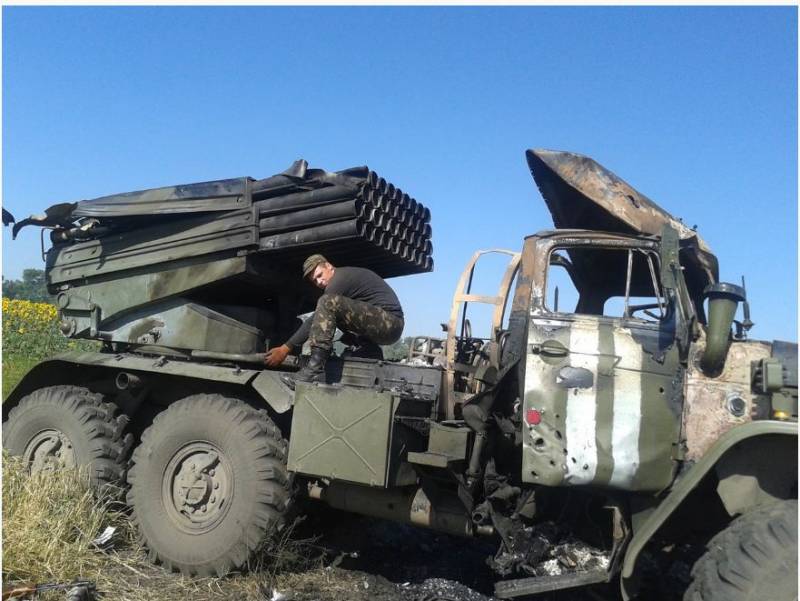 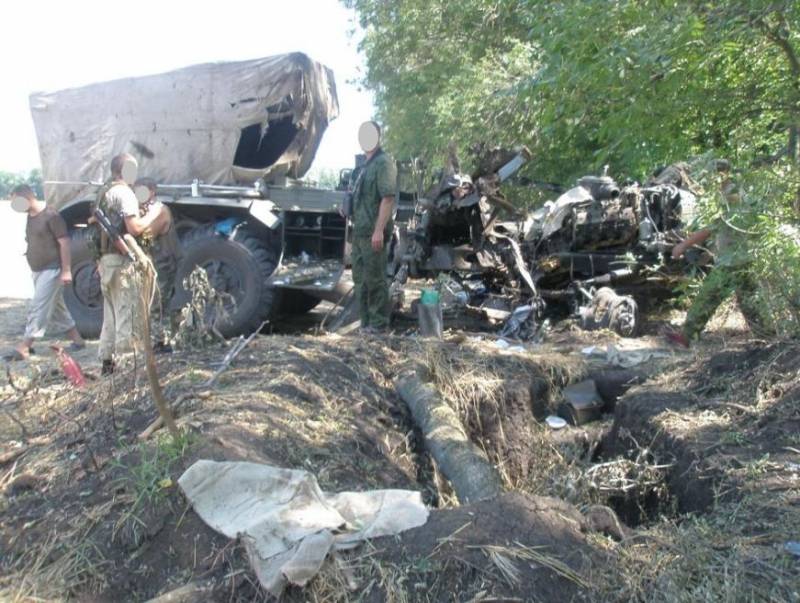 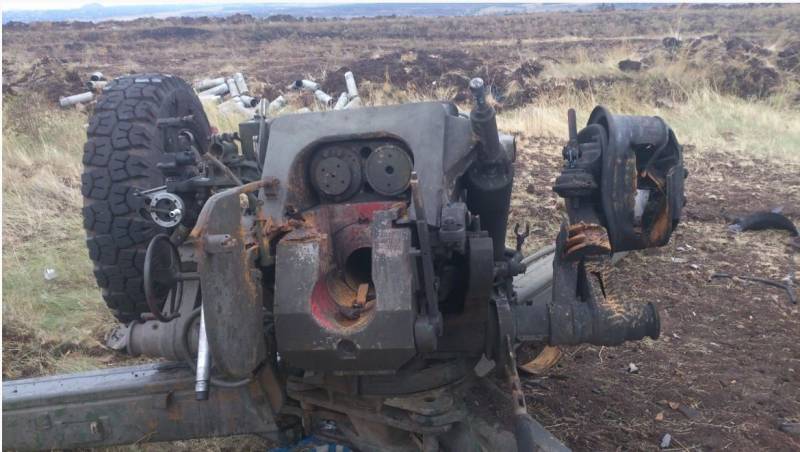 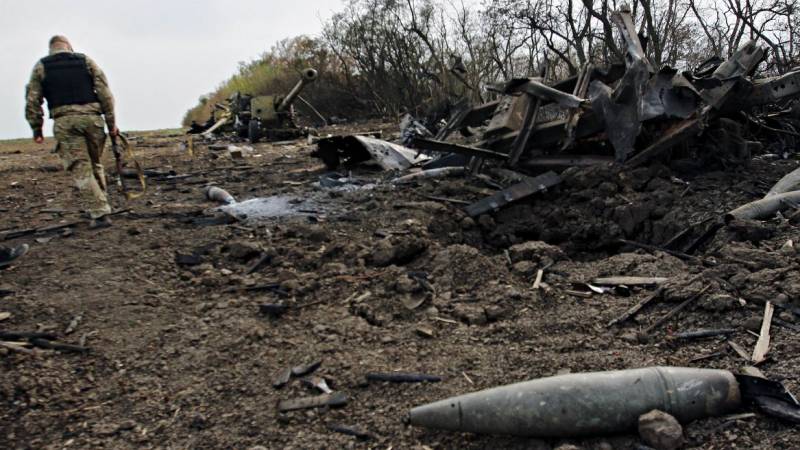 Artillery is one of the main actors of the war in the Donbas.

According to the former deputy minister of defense of Ukraine, Vladimir Tereshchenko, the trunk resource in the 1,5-2 is thousands of shots becoming the most important problem of artillery. On average, one gun in the Donbass shoots its resource in one, maximum two months, and then it must be sent to the rear to replace the trunk. In Ukraine, its own production of artillery guns there, and the stocks of cannon barrels are not unlimited. Obviously, the former Warsaw Pact countries will provide some kind of help, but the end is inevitable: Ukrainian cannon artillery from Soviet reserves will ultimately order a long life. "Point-U" could be a panacea for the Armed Forces of Ukraine, although the very fact that the use of such weapons during the civil war is shocking. But in the army, it seems, there are no specialists left to work with such equipment: the rocket men cannot correctly enter the flight program. The Americans tried in vain to help in pointing missiles with their own satellite system, but the age of the Tochka-U electronics in this case played into the hands of the militia.

The next "highlight" of the Armed Forces of Ukraine was the connection, which is not protected by almost anything. 95% of operational information is transmitted through the mobile phones of generals, officers and soldiers, and the remaining 5% comes from foreign digital stations for special forces. However, even elite units do not always correctly use such equipment, often not observing the radio silence mode. Practice shows that when communicating during a march, the radio signals of units of the Armed Forces of Ukraine are easily detected by the militiamen, and artillery strikes are being made at the points of broadcasting. Of course, this experience does not pass without a trace for the Ukrainian military: at present such incidents are becoming isolated. But the APU used cellular communication and, obviously, will continue to use it. Such a telephone connection becomes an invaluable information source, not only for the militia, but, paradoxically, for the command of the ATO.

So, 11 July 2014, the headquarters of the ATO learned about the actual destruction of the 24-th mechanized brigade after the spouse of one of the surviving fighters was able to get through to the general. Similar situations in the Ukrainian army are not rare. Often, the results of the operation of the Armed Forces of Ukraine can be learned only from the personal Twitter or Facebook of the unit commander, and sometimes the details of the impending offensive appear on such pages. In addition, the danger of active work of the ATO headquarters on the radio is the possibility that the militia will determine their location using triangulation methods. Given the low mobility of headquarters, the likelihood of an artillery strike on them multiply increases.

The destroyed 24-I separate motorized brigade of the Armed Forces of Ukraine under Zelenodolyem. The neglect of engineering training in the ranks of the Ukrainian army is clearly visible. 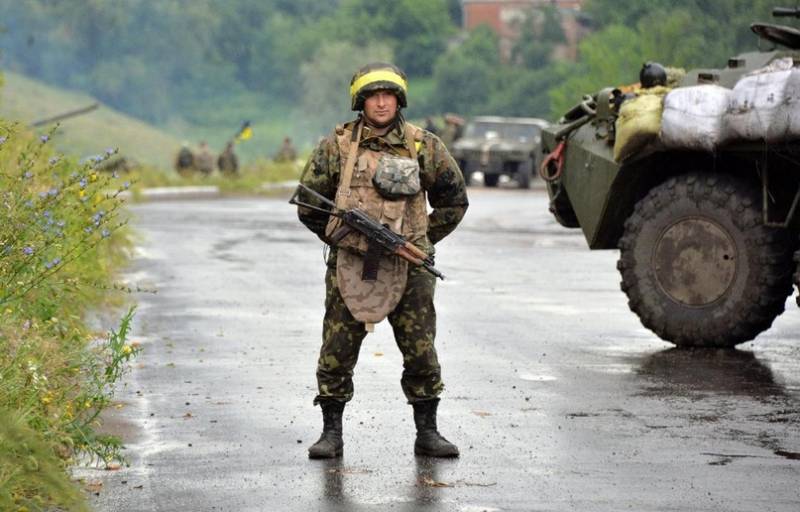 Body armor became a cult in the ranks of the APU.

This cult of body armor and personal protective equipment with almost complete disregard for fortification - this also became the hallmark of the tactics of the Armed Forces of Ukraine in the southeast. In this sense, the example of the Slavyansk blocking operation is indicative, when equipment, people and tents were placed in an open area of ​​about a hectare. Now it becomes clear why militiamen use RZSO so effectively. During the 2014 offensive operations, the APU equipment on the parking lots almost never dug in, or went deep enough. The fighters slept on beds in tents set right on the open field, even without a roll. The equipment was often crowded “board to board” - naturally, in the event of an artillery attack, it increased the loss of combat vehicles. 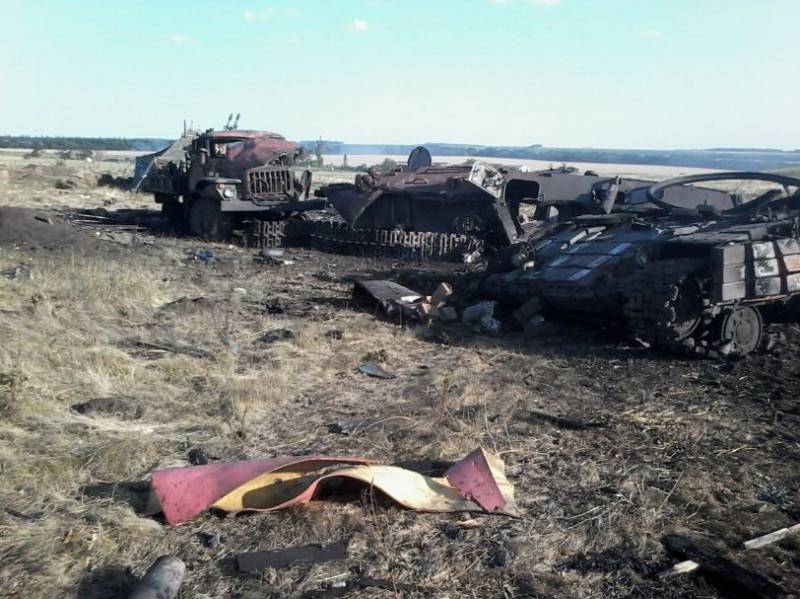 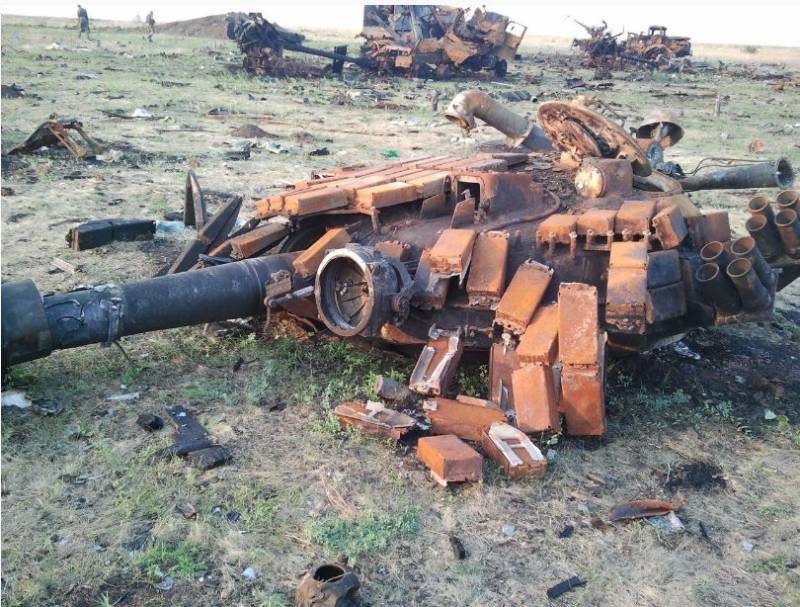 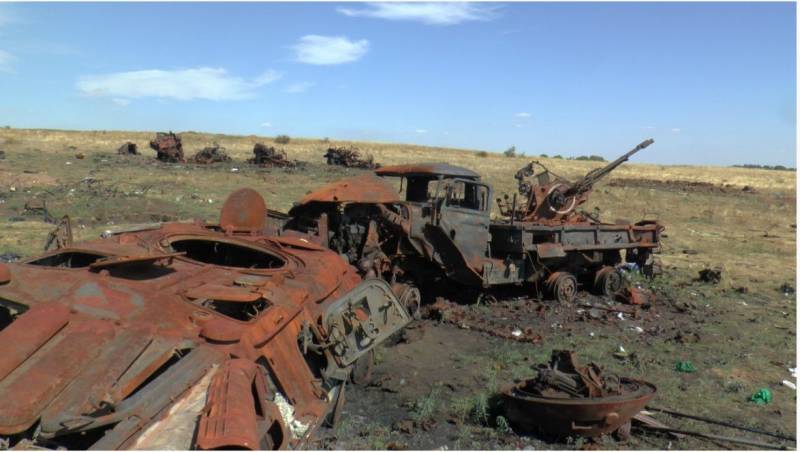 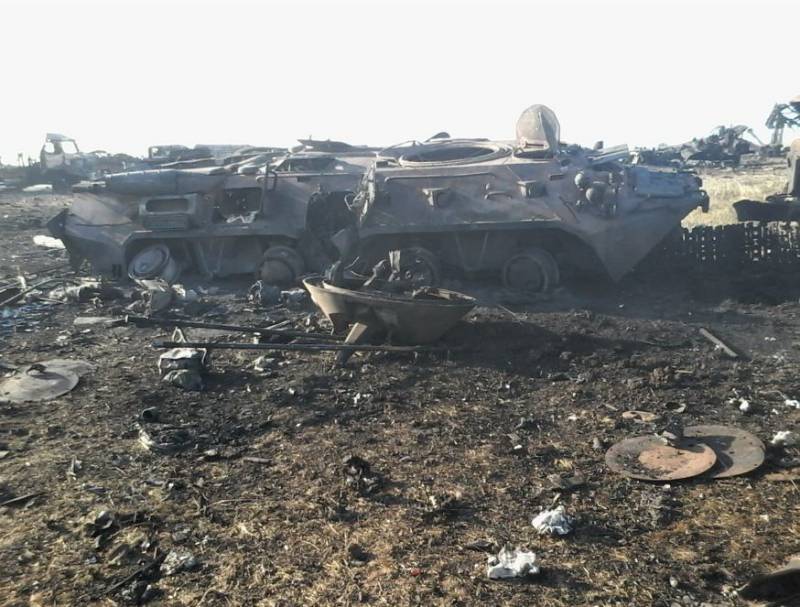 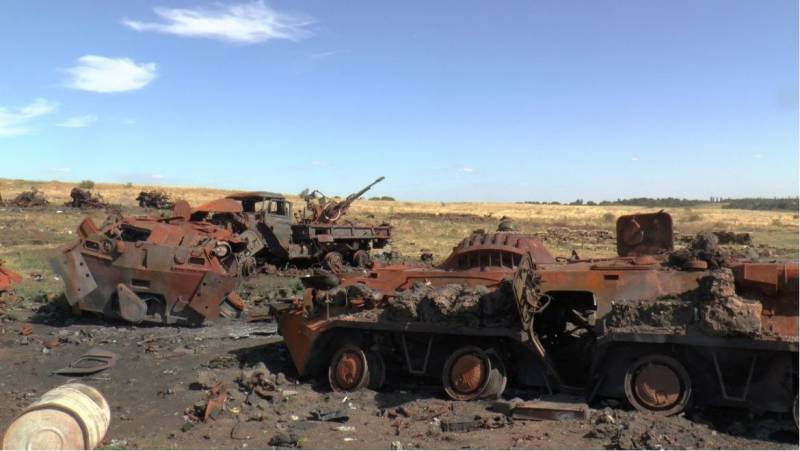 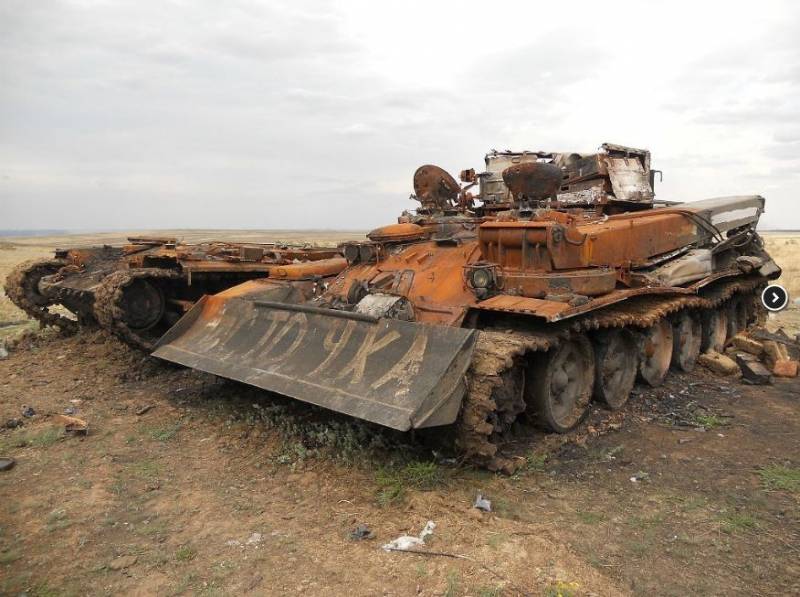 A series of destroyed equipment, located actually aboard to board.

In many ways, this slovenliness is a consequence of the undemanding ATO command in the early years of the conflict towards the engineering support of troops. Tanks at checkpoints they do not dig in, and fortifications are built from tires, boards and bricks. Over time, the Ukrainian army understands that even the most advanced NATO body armor is inferior to a conventional trench in defense conditions. This is especially true in the possibilities of massive use by the enemy of all types of artillery. In fact, now military clashes in southeastern Ukraine bypass without direct contact of the parties, and pass around roadblocks and reference points.

The operational-tactical sterility of the command of the Armed Forces of Ukraine is clearly manifested in the release of encircled groups and attempts to cut off the LDNR from the border with Russia. Surrounded, as a rule, do not receive any help from outside and are forced to surrender en masse, die or, at best, break through on their own. So, near Ilovaysk 12 August 2014, after a series of unsuccessful attempts to take the city "in the forehead," the command sent a battalion tactical group to attack from the north. And it succeeded - a group with a dagger blow broke through between Mospino and Ilovaisk, and then moved in the direction of Zelenoye - Fedorovka. There was no support for further advancement by the Ukrainian Armed Forces, and the militia launched flank attacks, slamming the BTG in the mousetrap. 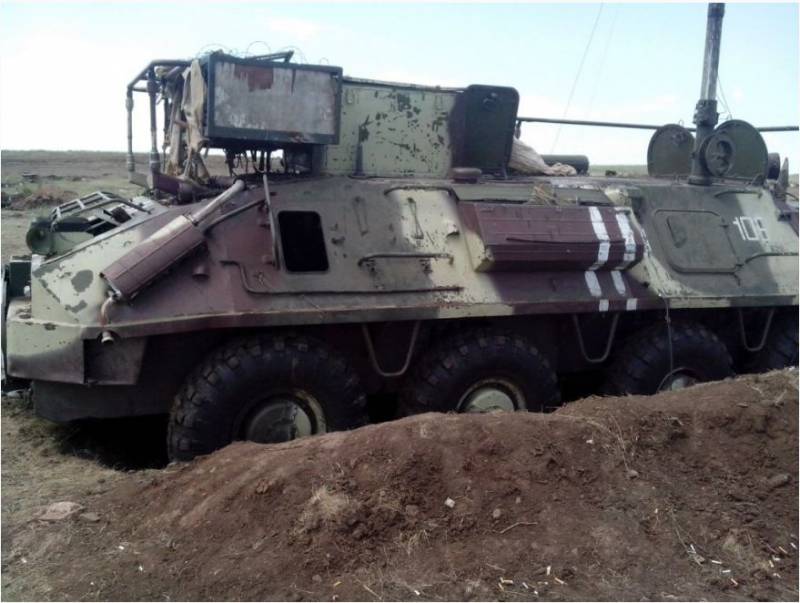 The reason for such failures of the Armed Forces of Ukraine on the battlefields was the ignorance of top commanders, as well as the lack of basic combat skills among middle and junior commanders. People are often appointed to positions in command not on professional qualifications, but on ideological grounds. Also played a role whistleblow in the General Staff, when the post of Minister of Defense for a short period was replaced by five people. One of them was Valery Geletei, who spent only two years in the army, the rest of the time he served in the Ministry of Internal Affairs. It is also important and the American influence on the command of the Armed Forces of Ukraine - specialists from West Point are trying to translate the tactics of combat operations of the Ukrainian army in their own way. The trouble is that the army of Ukraine has forgotten how to fight even by the Soviet canons, not to mention the overseas standards. It is extremely difficult for offensive ground forces. This is largely due to the low motivation of the infantry, which refuses to fight without the support of armored vehicles, and this very technique with its breakdowns often disrupts even the usual troop movements along the front. The low level of engineering service does not allow for the effective repair of failed armored vehicles, which often fall into the hands of the militia, and they, in turn, are very attentive to such gifts and successfully restore the vehicles. They are not effectively able to command a tank force in Ukraine, therefore they are limited to point strikes of groups on 6-8 machines. They pinned their hopes on the “Hummers” in the 95-th separate airmobile brigade from Zhytomyr, but they are poorly armored, do not like Ukrainian dirt and are difficult to repair due to lack of spare parts.

Of course, like any other army, the Armed Forces of Ukraine learn from their mistakes and, over time, increase their combat potential. However, the effect of a low starting base, as well as a much more effective growth in the capabilities of the LDNR army in recent times, is still having an effect.

Author:
Evgeny Fedorov
Photos used:
lostarmour.info
Articles from this series:
Land units of the Armed Forces of Ukraine. Tactics of combat use. Part of 1