16 May 2012
5
The invention of H. Maxim of the first modern machine gun clearly demonstrated the fundamental possibility of creating an automatic weaponsthat does not require an external source of energy. In a few years, Maxim's machine gun will be the reason for the revision of a considerable part of military science. But before that it was necessary to live. Yes, and competitors were not idle and tried to take away from Maxim promising sector of weapons production. For this reason, at the end of the 19th and the beginning of the 20th century, it can be called the era of rapid development of machine guns. Designers from different countries tried to do something newer and more convenient and effective. One of these gunsmith engineers was the Swede H. Palmcranz. He did not copy the construction of Maxim or borrow any parts of it and did everything from scratch. 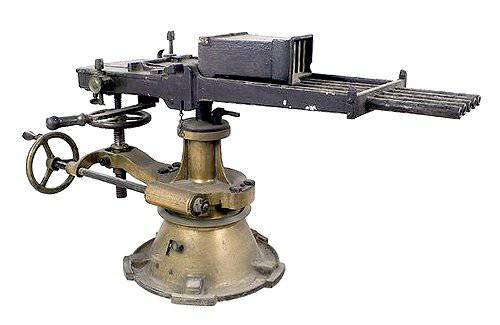 If we look for any earlier analogues of the Palmcran system, then it would rather be French mitraleza or a Gatling machine gun. Palmcranz went the usual way to increase the rate of fire by using several trunks at once. Yes, and some other points of the design of Palmcranz will also remind of the first American machine gun. Thus, the four-barrel version of the Palmkranz machine gun was the most common. Four barrels with a single receiver and separate valves were proposed to be mounted in a row on one machine. The first copies of the new machine gun were mounted on a stand with a typical "artillery" wheels for guidance in the horizontal and vertical planes. It is possible to understand such a decision - the year stood 1897, and there was no agreement on the design of the machine gun barrel. However, the machine gun machine Palmkrantsa on the background of the design of the bolt, trigger and other "stuffing" does not look so unusual.

For each barrel of the machine gun, regardless of their number relied own shutter. He was a cylinder moving along the guides inside the receiver. In the inner part of the gate there was a cavity for the drummer and the mainspring. It is noteworthy that the valves had an external drive - for some unknown reason, Palmcranz neglected the recoil energy. This technical solution also reminds of the Gatling machine gun. The closures were set in motion with the help of separate rods connecting them to the crankshaft. The latter, in turn, was equipped with a handle on the side of the machine gun. All this "exotic" worked as follows. Calculation of the machine gun laid in the vertical stores ammunition (up to 30 pieces), produced an approximate aiming at the target and the arrows began to rotate the handle on the side of the receiver. During its rotation, each barrel-bolt unit performed several operations in one turn of the handle and crankshaft. At first, the slide retreated back and the cartridge from the store under its own weight was fed to the dismounting line. With further rotation of the handle using the crankshaft, the bolt discharged the cartridge into the chamber and at the extreme front point of its movement released the drummer. That, in turn, beat on a cap. Shot shot. The shooter continued to rotate the handle and the bolt, moving back, pulling the sleeve to the extraction window. In one turn of the "trigger handle" each barrel produced one shot. Since with such a system it was almost impossible to ensure a good rate of fire and an acceptable recoil force, the barrels fired alternately: the connecting rods with the crankshaft were attached to the latter just like the connecting rods in piston engines. Due to this, during one turn of the handle, the machine gun produced two volleys. Thus, in one revolution of the handle a shot was made by all the barrels of the machine gun. 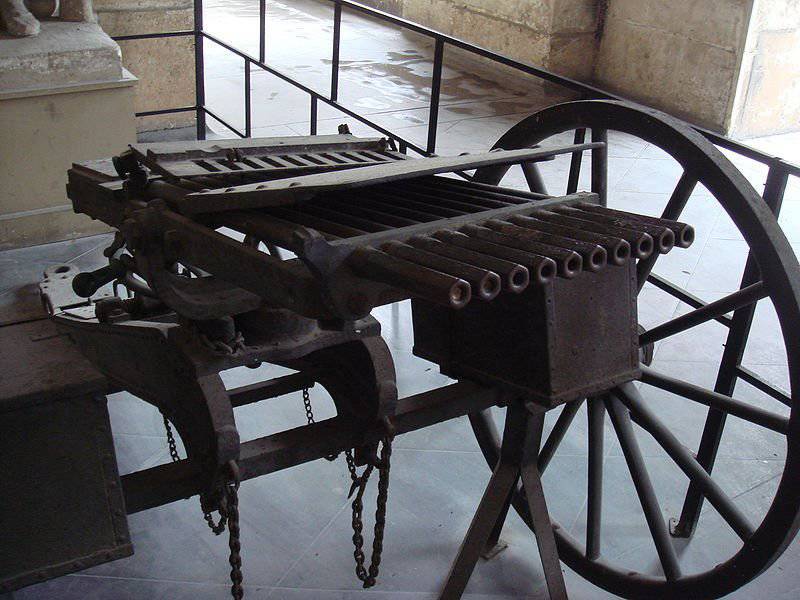 The development of Palmcran at the early stages attracted the attention of a major businessman T. Nordenfelt. He funded the end of the design of a new machine gun, and then set up its mass production at his Maxim-Nordenfelt factory called the Nordenfelt Machine Gun. The Swedish tycoon had good connections abroad, and in general was distinguished by a good business acumen. Thanks to this, already in 1898, Nordenfelt managed to interest the new machine guns of the British military. Great Britain adopted the Nordenfelt machine gun and ordered several dozen copies of the new weapon. Soon, several more European countries became interested in the machine gun of the Palmkran-Nordenfelt. Apparently, a kind of advertising in the form of an English order. Anyway, by the beginning of the 20th century, the production of machine guns at the Maxim-Nordenfelt plant had acquired a large scale.

The machine gun enjoyed some popularity. Therefore, using its relatively simple design, the engineer Palmcranz began to develop new modifications. The essence of the design allowed to add a virtually unlimited number of barrels and gates, which the designer did not fail to take advantage of. The development of the project proceeded in two main directions: an increase in the number of trunks and a change in caliber. In terms of the number of trunks Palmcranz "turned" from three to ten. On machine guns with more than five barrels, a special mechanism was installed that allowed them to be bred apart and to create a real fan of bullets. The maximum deviation of the extreme barrels allowed for firing at a distance of 300 meters to shift the aiming point of the barrel to the side more than a meter. As for the caliber, the experimental samples of Palmcranz were made for cartridges with bullets from 7,69 to 25,4 mm. By modern standards, the most powerful versions of the Palmkranz-Nordenfelt machine gun can be considered small-caliber artillery. However, especially large calibers are not popular. European military ordered mostly machine guns calibers to .45. Do not become massive and machine gun options with a large number of barrels. So, for example, the UK ordered mostly three, four and five-barrel machine guns caliber .303 and .45. For use in his machine gun Palmkranz also created a new armor-piercing cartridge with a small solid steel core in the bow of the bullet. 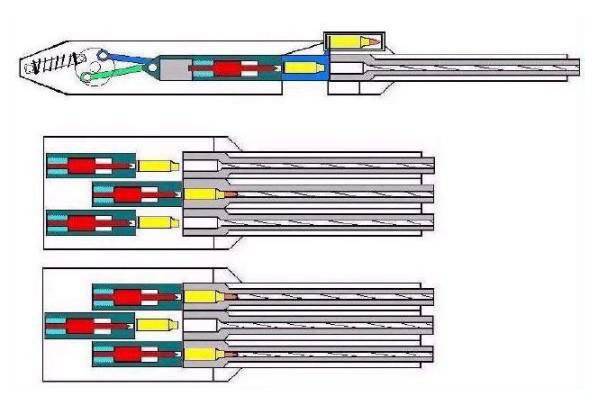 The multi-barreled Palmkranz machine gun was simple in its design and, as a result, relatively cheap. However, a large receiver and a block of barrels made the machine gun quite bulky. In terms of weight, I must say, it was not very different from Maxim’s machine gun, but significantly lost to him in ease of use. The fact is that the need for an external drive for the mechanics of the machine gun did not allow one shooter to simultaneously fire and direct the machine gun. The machine gun of Maxim had no such problems - his automation worked only at the expense of recoil energy, and not from a special handle. Finally, even the early versions of Maxim’s design had a rate of fire of about 600 per minute. The machine gun of Palmkranz, in turn, even in the ten-barreled version could not give out more than four hundred. The future of this weapon was obvious. For a combination of reasons, all the countries that adopted the Palmkranz-Nordenfelt machine gun soon began to abandon it. The last copies were decommissioned by the beginning of 1910 of the year. Military throughout Europe preferred the automatic system without an external source of energy. It was along this path that the further development of machine guns went. Over time, it should be noted, the idea of ​​an external drive for rapid-fire systems will return to weapons business again, but this is a completely different история. 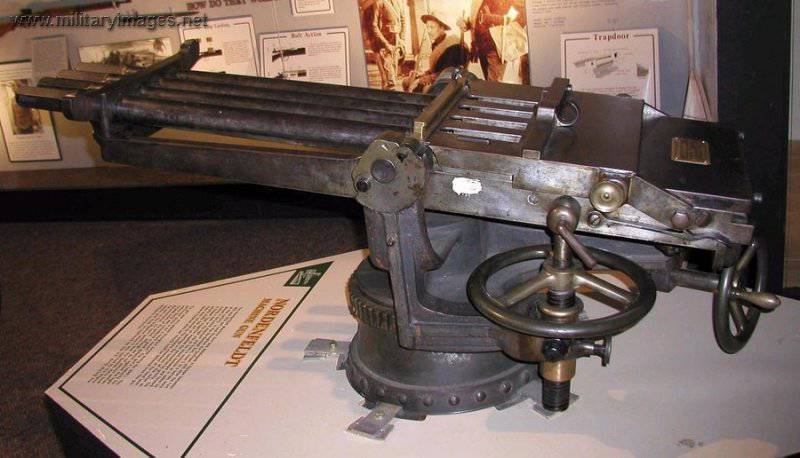