American flying saucers Lenticular ReEntry Vehicle: where are they hidden?

29 2018 June
55
The LRV orbital bombers have become the most secret US military-space project, the fragmentary information about which has been haunting the minds of the security forces of the whole world for more than 60 years. 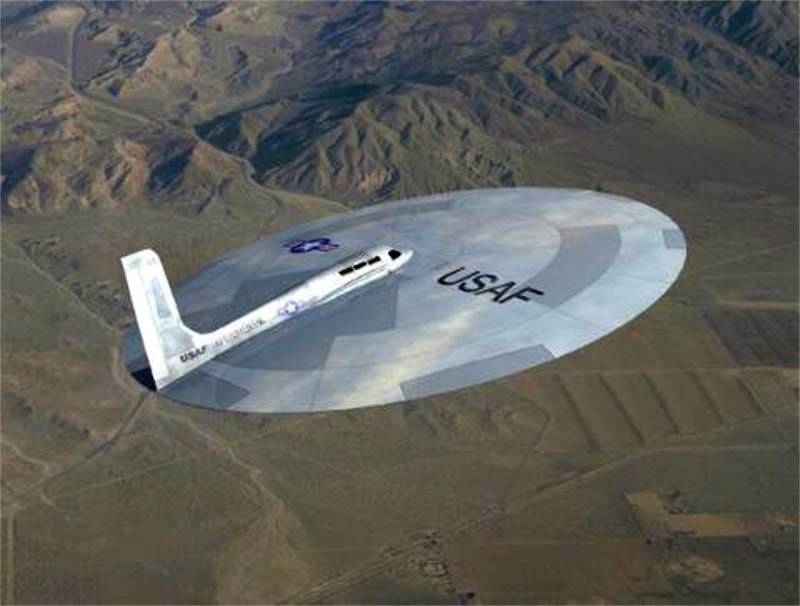 Alien technology in the service of the Pentagon

Back in the distant 1959, NASA engineers began to develop new type of spacecraft. They were supposed to be in the form of a flattened disk, their own engines for changing the orbit, as well as launch systems that ensure delivery of several nuclear missiles to the targets.

Some military experts believe that the Roswell 1947 incident of the year was the impetus for the construction of such an aircraft when an alien spacecraft with a crew aboard crashed in New Mexico. 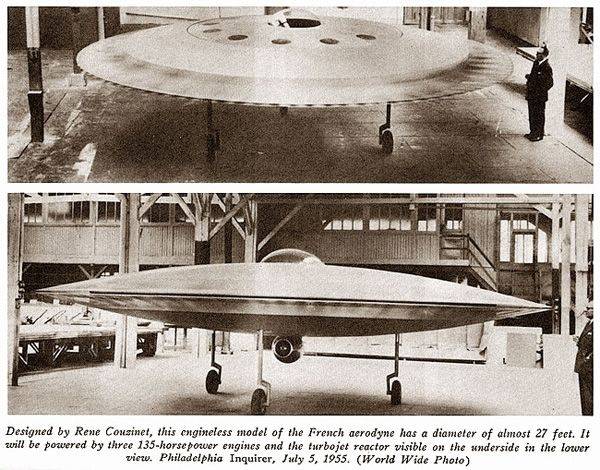 Photos of the flying saucer of aliens, called Pentagon fake

Be that as it may, but after 12 years, the NASA design team proposed to the Pentagon an unparalleled concept of building the Lenticular Re-entry Vehicle discoid spacecraft, which was to become a manned orbital bomber.

It was a time of fierce confrontation between the USSR and the USA in Vietnam, a time when US President Dwight Eisenhower was about to drop an atomic bomb on the heads of North Vietnamese and Chinese Communists several times. Only the combat power of the Soviet Army and the difficulty of a nuclear strike on Moscow kept him from such a decision.

Realization of the dream of world dominion

The Pentagon supported the top-secret project to create an LRV space bomber almost immediately. New American spaceship was entrusted to North American Aviation, the use of which was given to the most reliably protected Wright-Patterson airbase.

President Eisenhower was informed that within a few years the United States could become the most powerful country in the world, able to dictate its will even to the USSR, which the "war hawk" really liked. 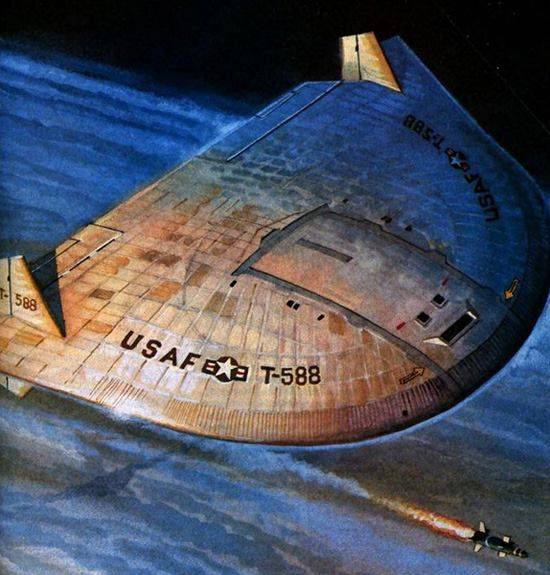 For four years, scientific research was carried out in underground hangars, which allowed 1963 to present the first copy of a new autonomous spacecraft.

According to the project documentation, the American flying saucer had a diameter of 12,2 meters, and its height in the central part did not exceed the 2,29 meters.

The spacecraft had its own weight of 7730 kg, but could carry onboard payloads of 12 681, including three crew members and four launchers delivering nuclear warheads to the target.

The designers offered to deliver the LRV into orbit using the Saturn C-3 space rocket, where the flying saucer could patrol for at least 50 days. Thanks to its own power plant and several rocket engines, it could not only change its orbit, but also conduct a dive from airless space to a ground target.

At that time, no USSR air defense system could withstand the unexpected and merciless attack of the Lenticular Re-entry Vehicle. In case the “councils” will have this weaponThe Americans envisioned the use of Dyna Soar, a disk-based space interceptor that could easily destroy Soviet communications and surveillance satellites.

The designers installed in the center of the ship a wedge-shaped rescue capsule in which the crew members were to be during takeoff and landing (another indirect evidence of the unearthly origin of the idea of ​​this spacecraft).

In addition, the unit contained a residential compartment with three beds located one above the other and a working compartment in which the pilots received and executed commands received from the main command post. 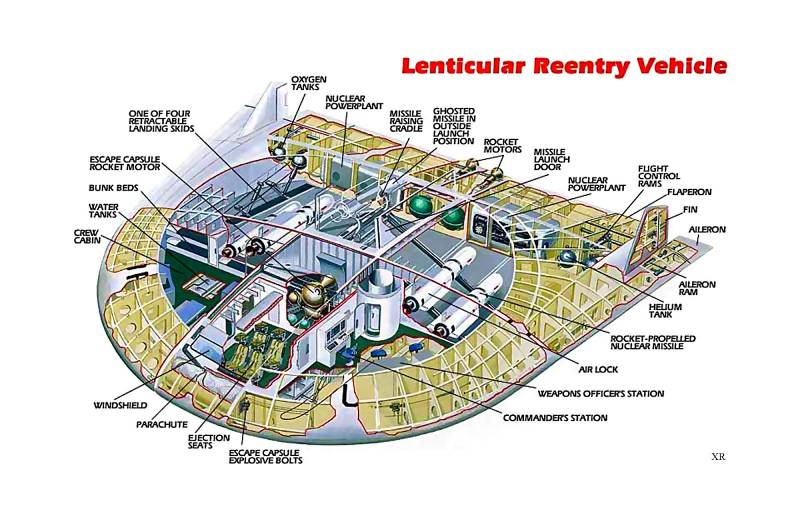 The internal layout of the ship LVR

Special oxygen and helium tanks provided astronauts with an acceptable pressure in the 0,7 atmosphere and allowed them to be on board the LVR without space suits. In the event of a planned or unplanned landing, there was a retractable four-post ski landing gear. The fact is that the landing was intended solely on the water surface, and the ski constructions were best suited for this, without taking up much space in the apparatus itself.

In case of unforeseen circumstances, the rescue capsule with astronauts was fired from the ship and landed independently on parachutes, while specially built engines made it maneuverable and allowed the crew to choose the site most suitable for the landing.

Energy autonomy and the ability to reprogram other satellites

To ensure the autonomy of the orbital flight, the LVR was supplied with a miniature source of atomic energy. But the development of the first sunflower concentrator of the Sunflower type (“Sunflower”), which was supposed to weigh 362 kg, was revealed at an accelerated pace, opening in a flower-shaped orbit with a diameter of 8,2 m.

Interestingly, the source of atomic energy was not planned to return to Earth. He was to remain in space and be selected by the crew of the next LVR, aimed at orbital patrols.

The creation of a double shuttle vehicle with which the astronauts could visit any unmanned satellite, repair or reconfigure it, and also select an energy unit or other necessary object in space, was an absolutely unique solution.

Underwater strike on an orbital bomber

The news of the presence of such a shuttle apparatus was a serious blow to the leadership of the USSR. It realized that it could at any moment lose its companions, who simply would have started to carry out the commands of the American military.

We must pay tribute to the employees of the Soviet special services, who already at the initial stage of development of the Lenticular Re-entry Vehicle were able to obtain information about the principles of its work, as well as about the design of some of the nodes.

This is what allowed the Soviet designers to take retaliatory measures. Paradoxically, it sounds, but our response to the Pentagon was not cosmic, but underwater! Our designers managed to quickly create, and the industry launched the construction of 32 submarines of the 659 project.

By the beginning of the Caribbean crisis in October 1962, the west coast of North America was patrolled by 5 submarines of this type, each of which was armed with 6 P-5 missiles with nuclear warheads of 220 kilotons.

If necessary, these submarines could erase not only densely populated California, but also other major cities of the US Pacific coast.

When they talk about the end of the Caribbean crisis, they mainly mention the withdrawal of American strategic missiles from Turkey and the Soviet from Cuba. The general public is still little aware of the fact that Khrushchev and Kennedy made other serious concessions to each other.

The Soviet Union stopped the launch of the SSGN of the 659 project, replacing the missile launchers with torpedo tubes on the already built 6 submarines, and the Americans announced that their Dyna Soar space interceptor program and the Lenticular Re-entry Vehicle orbital bombers were being closed.

But if the USSR unambiguously fulfilled its obligations, then there are some very serious doubts about the United States. And even if there has never been any official information about the launch of LVR, the “alien” spacecraft, which often appear over the USA in recent years, raise more questions than answers ... And the Pentagon’s deathly silence only stirs interest in these facts.

We are in Yandex Zen
On the prose of life in the missions "Apollo"
Mission to Mars will provide US space leadership
55 comments
Information
Dear reader, to leave comments on the publication, you must to register.