27 2018 June
54
The process of creating battlecruisers in Germany did not stop on Mackensen-type ships, although it could, because in February 1915 it was decided to continue the construction of a series of battlecruisers according to the same project, bringing their total number to seven, and no new ships Germany did not order until the end of the war. However, on March 17, 1916, a landmark for Germany fleet event - Alfred von Tirpitz left the post of State Secretary of the Naval Department (Minister of the Sea) and was replaced by Admiral Eduard von Capelle, which made the decision to continue the construction of battlecruisers of the Mackensen type subject to revision.


It all started with the development of the battlecruisers, which were to be built after the seven Mackensen: The 19 in April The 1916 design bureau presented three options for the new battlecruiser. They all had the same composition of weapons: 8 * 380-mm guns in two-gun turrets, 16 * 150-mm guns, 8 * 88-mm anti-aircraft guns and five 600-mm torpedo tubes. Reservations for minor deviations corresponded to what was used on the Mackenns. At the same time, the GK 1 variant had a normal displacement of 34 000 t, the power of the 110 000 machines was hp. 29,25 knots and speed with maximum fuel supply in 6 500 tons. The GK 2 version was larger (38 000 tons), power of 120 000 X units, 7 500 fuel rates and 29,5 knots. The GK 3 variant with equal displacement and fuel reserves with the GK 2 variant had thicker barbety of the main caliber towers (350 mm versus 300 mm), but on 5 000 hp less power, which should have developed only 29 knots. As far as the author of this article could understand, the rest of the options differed only in the thickness (and, possibly, shape) of the armor deck outside the citadel - if the first two provided protection 50-80 mm in aft and 50 mm in the bow, the third had a gain to 120 mm and 80 mm, respectively (but this is not accurate). At the same time, within the citadel, the reservation remained (as with Mackensen) very weak - only 30 mm. 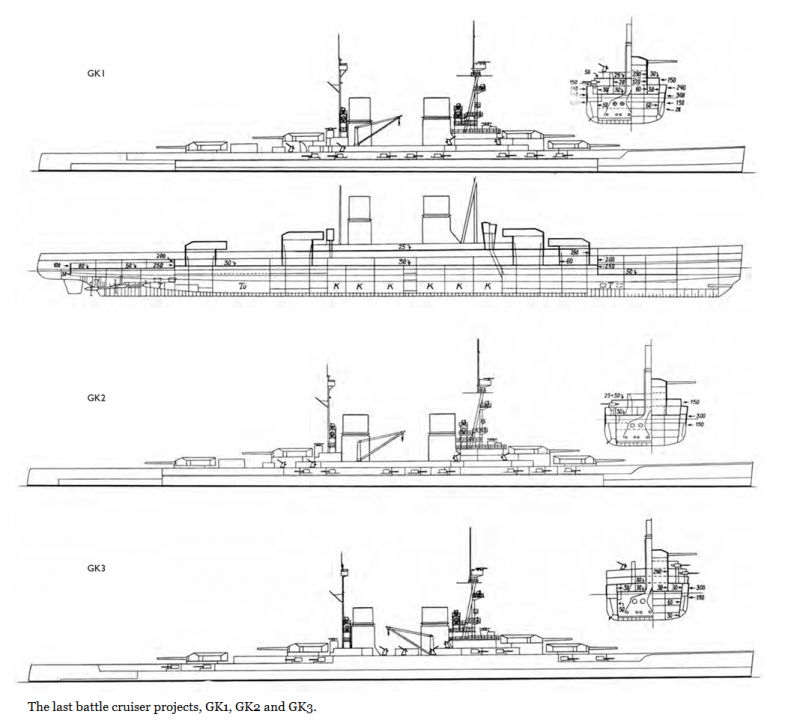 Another difference from the Mackenzens would be an increase in the number of boilers on oil heating from 8 to 12. The Germans were again not ready to switch to oil, this time the key argument was not the lack of oil production in Germany, but the fact that Mackensen’s armor protection was not considered completely sufficient for new ships and to weaken it additionally with the absence of coal pits (which according to the Germans, played a significant role in ensuring the survivability of the ship) was deemed impossible. Reinhard Scheer, who by that time had already joined the command of Hochseeflotte, preferred the most high-speed version of the GK 2.

But all three of these options represented the development of the battlecruisers, and this was fully suited by the naval ministry, which continued to strive for the separation of the "capital" ships into battleships and battlecruisers. But the new state secretary considered such an approach obsolete and spoke in favor of merging them into a single class: accordingly, he proposed to build new ships as high-speed battleships possessing the reservation and protection of the battleship and the speed allowing them to work together with the battlecruisers.

Naturally, such a proposal entailed discussions: the naval ministry proposed to revise the draft of the battle cruiser, putting not reinforcement of weapons at the head, but reinforcement of body armor, which, according to experts, gave the ship more chances in confrontation with battleships and did not violate the “Fleet Law” . Subsequently, such battlecruisers could develop into a type of high-speed battleship. At the same time, Rear Admiral Hebbinghaus (Hebbinghaus) called for the abolition of the construction of four of the seven battle cruisers. The State Secretary supported the Rear Admiral, but following the results of the review, only three battlecruisers with the designations Ersats York, Ersats Scharnhorst and Ersats Gneisenau were suspended to create them under a new project. A variant of the GK 6 was proposed, which had the same weaponry as the options presented earlier, but the normal displacement in 36 500 t and reduced speed to 28 nodes, the fuel reserves should have been 7 000 t (500 t less than GK 2 variants and 3). The thickness of the deck armor outside the citadel was reduced to 50 mm, and the upper armor belt - from 240 mm to 200 mm, but the thickness of the barbets and the forehead of the towers was brought to 350 mm. Admiral Scheer did not approve such a decision, he believed that the battlecruiser should be faster.

In general, it turned out the following: once again the Germans formulated the idea of ​​a high-speed battleship, but could not decide on its construction. For the battlecruiser, the displacement in the 38 000 t looked very large, and the smaller fleet could not be placed in a smaller size. At the same time, the resulting ship (yes, the same GK 6) was, of course, stronger than the Mackensen, but, apparently, the admirals decided that the increase in its combat effectiveness does not justify the additional difficulties that would arise when building ships under the new project. As a result, 24 August 1916 Mr. Secretary of State changed his mind and proposed to build "Ersatz York", "Ersatz Scharnhorst" and "Ersatz Gneisenau" on the model and likeness of "Mackensen."

On the one hand, such a decision seemed to be quite reasonable, because the comparison of the Mackensen with the British battlecruisers demonstrated a clear superiority of the German ships. However, this time, for some reason, the Germans completely ignored the possibility of meeting the Mackensen with the English high-speed wing, which consisted of battleships like Queen Elizabeth, with which the Mackenzens would still be hard.

Be that as it may, in August 1916, the Germans returned to the Mackensen project, but not for long: this time the British Ripals and Rinaun became the catalyst for change. The fact that the British are building new battlecruisers with 381-mm cannons has become known in Germany on 31 in October, 1916 g, and in addition, it was reported that, after much deliberation, the Americans are going to introduce ships of this class into your fleet.

After that, the transition to the 380-mm guns was virtually uncontested, and the Germans worked again with six different variants of the battlecruiser with such guns, but the fact is that orders for three battlecruisers were already placed, and the Ersatz Yorke was already laid down - This happened in July of 1916. As a result, the temptation arose not to create a project from scratch, but to use the mechanisms that were already ordered for these ships. As a result, ships of the Ersatz York type actually became re-armed on the Mackenzens 380-mm cannon. As we remember, the Germans, designing the Mackensen, at some point came to the ship with a displacement of 33 000 and with eight 380-mm cannons, but, being afraid of such a high displacement, reduced the number of towers of the main caliber to three. Now they can be said to have returned to this option: “Ersatz York”, possessing protection at the level of “Mackensen”, had a normal displacement in 33 500 t and armament from 8 * 380-mm guns. 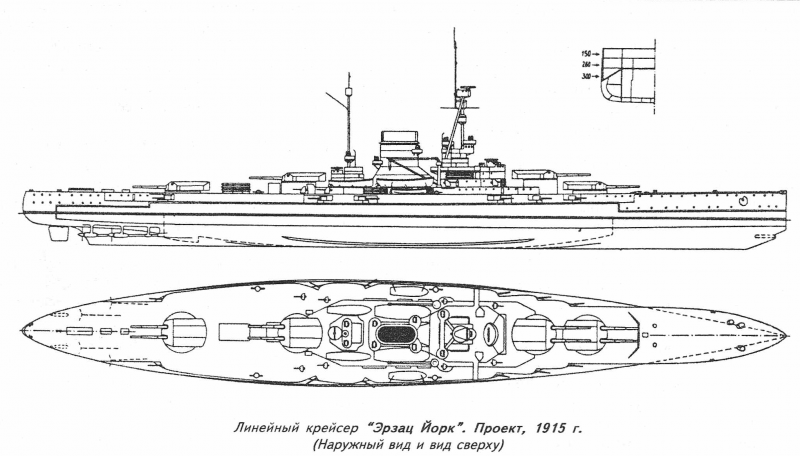 German 380-mm guns seriously differed from the British 15-dm artillery system, representing guns of opposite concepts: if the British 381-mm was a classic "heavy projectile-low initial speed", then the German C / 13 (i.e., the 1913 g gun) , on the contrary, there was “a light projectile — high initial velocity”.

Other artillery weapons were represented by a dozen 150-mm guns and eight 150-mm anti-aircraft guns. The number of torpedo tubes was reduced to three, but their caliber should have been 70 cm.

Reservations corresponded to that on Mackenzens, from which Ersatz York differed only in slightly larger geometrical dimensions (it was longer by 4,8 m and sat in water on 30 cm deeper, the width remained the same) and an insignificant change in the layout, resulting in chimneys managed to merge into one pipe. This was considered a very progressive decision, since it removed the pipe from the conning tower, allowed the mast to be moved to the stern and thus provided the best viewing angles from the conning tower.

So, we can say that the Germans still decided to take a step in 1916, which was to take place a year earlier - then everything was ready for the creation of battle cruisers with eight 380-mm guns and a displacement of 33 T. Of course, in any case, they would not be part of Hohzeeflott and would subsequently be disgracedly dismantled for metal, but, of course, this was still unknown in 000. Comparing not the steel giants anymore, but only the naval thought of England and Germany, we understand that the Ersats of Yorkie in their performance characteristics could become a full-fledged counterweight to the British “high-speed wing” of the five battleships of the Queen Elizabeth type. They are also in all respects (except speed) would have surpassed the English “Ripales” and “Rinaun”. However, in 1915 g, when Germany laid its last battle cruiser, the UK set about building Hud.

PS Somewhat running ahead, we will pay a little attention to one of the most amusing incidents of German shipbuilding. After the characteristics of the British "big light cruisers" like Koreydzhes became known in Germany, German designers 1918 presented several projects of a similar ship in March. In the best traditions of the German shipbuilders, the German "white elephant" was slightly better armored (in various projects the thickness of the armor was 100 or 150 mm), carried a few smaller caliber weapons (four 350-mm guns in two towers located in the extremities) and had oddly enough, the speed is from 32 to 34 nodes. 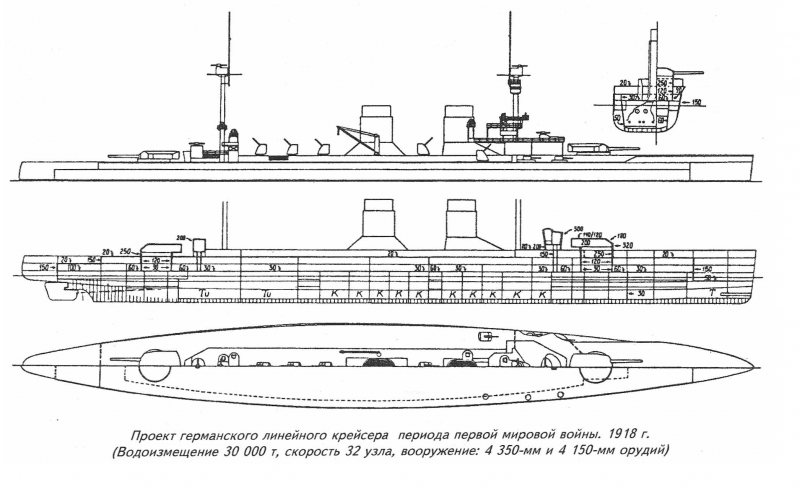 The auxiliary artillery composition is amazing - of course, the 8 * 88-mm anti-aircraft guns at that time were quite adequate to the air defenses - not because it really allowed the ship to be protected from an air attack, but because it was just as inadequate on other ships of the world. But it’s interesting what they were counting on in Germany, planning to install a mine caliber of four 150-mm cannons, of which only two could fire on one side?

The most high-speed option was to have the rated power of the 200 000 hp machines, but what is interesting is that even on such a high-speed ship the Germans could not completely abandon coal-fired boilers - 40 boilers should have operated on oil and 8 - on coal. The displacement of these projects ranged from 29 500 - 30 000 t.

As we said earlier, the British had no reason to build the Koreydges-type light battle cruisers - ships of this type, in essence, were born thanks to D. Fisher's fad and were absolutely not needed by the fleet. The British admirals tried to disown them even at the construction stage, offering to convert all three Koreyges into aircraft carriers. The Koreyjes simply did not have its own tactical niche; everything that they could could have been made better or cheaper using monitors or heavy cruisers like the Hawkins, or even ordinary light cruisers. In the face of Koreijs, Glories, and Furyes, the British actually received three “white elephants” (an animal rare, but incapable of working). But as soon as this became known in Germany, the creation of the ship “of the same, only better” was immediately initiated there. Having no tactical niche in the Royal Navy, the “big light cruisers” (or light linear ones, if you like) could not be of any use to Germany, and the only reason for which work was started on them can be considered only “once the British there is, then we need to. " In general, one can only express regret that the German naval thought, in fact, very successfully competing with England, until the very end of the war could not get rid of the internal feeling of British superiority.