13 May 2018
20
May 13 is Black Sea Day fleet Navy of the Russian Federation. This holiday was established 22 years ago, on July 15, 1996, in accordance with the order of the Commander-in-Chief of the Russian Navy “On the Introduction of Annual Holidays and Professional Days in the Specialty”. In the current political situation on the southern borders of Russia, the Black Sea Fleet plays a strategically important role. He literally stands at the forefront of protecting the southern borders of our country. Confronting Ukraine and the US allies in the Black Sea basin, protecting the Russian coast of the Crimea and the Caucasus, participating in the anti-terrorist operation in Syria - this is not an exhaustive list of the tasks that the Black Sea Fleet is successfully solving today. Although among the other Russian fleets the Black Sea Fleet is not the most powerful and numerous, it possesses an impressive, heroic history. The Black Sea sailors more often than the sailors of other fleets, had to take part in the wars that Russia had fought over the past centuries. 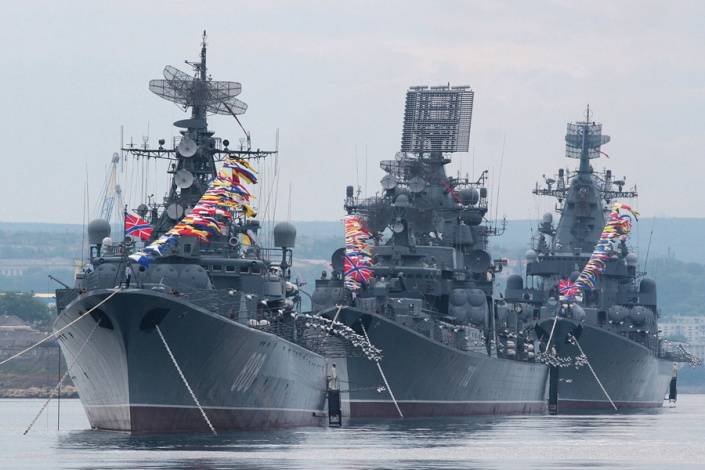 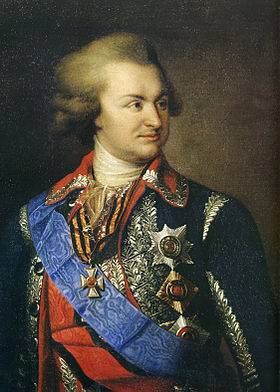 Since its creation, the Black Sea Fleet was subordinated to the Ekaterinoslav and Tauride Governor-General, who in 1783-1791. Count Grigory Alexandrovich Potemkin-Tavrichesky was one of the most prominent political and military figures of the Catherine epoch, who held the position of Governor-General of the Novorossiysk Territory and made a huge contribution to the development of the lands of Novorossiya and Crimea, for which he was nicknamed Tavrichesky. It was Count Potemkin who was the main initiator of the creation and subsequent strengthening of the Black Sea Fleet.

The state of the Black Sea Fleet was approved in the following year 1785 and included 12 battleships, 20 frigates, 5 schooners, 23 transport vessels. The fleet personnel at that time consisted of 13 500 people. The command of the command and control of the fleet was the Black Sea Admiralty, stationed in Kherson.

Since the Ottoman Empire was Russia's main strategic adversary in the Black Sea at that time, the country developed and strengthened the Black Sea Fleet at an accelerated pace. Of course, it was impossible to immediately staff the required number of ships, but already in 1787, the fleet had 3 battleships, 12 frigates, 3 bombardier ships and 28 military vessels of a different purpose. The first combat experience of the Black Sea Fleet acquired four years after its official creation - during the Russian-Turkish war 1787-1791. Then the Ottoman Empire presented Russia with an ultimatum, demanding to give back the Crimean peninsula. The answer of our country was negative, after which the war began. Despite the numerical superiority of the Ottoman fleet, which by that time had a long history, the Black Sea Fleet inflicted a number of serious defeats on the Turks.

In 1798-1800 The Black Sea Fleet participated in combat operations against French ships in the Mediterranean. By this time, the Black Sea Fleet was under the command of Vice Admiral Fyodor Ushakov, whose name is inscribed in golden letters in the history of the Russian Navy. Ushakov took command of the Black Sea Fleet in 1790 and remained in the position of commander until 1798, after which he was appointed commander of the Russian squadron in the Mediterranean. One of the most prominent Russian naval commanders, Ushakov won 43 naval battles and did not suffer a single defeat in his entire admiral's career. 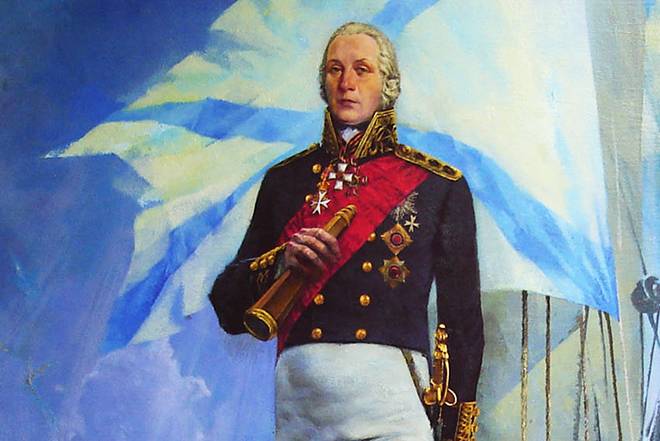 The Black Sea Fleet is generally rich in distinguished naval commanders. So the history of the fleet took shape, that he was always on the front line, he fought a lot and, accordingly, gave the national history of heroes - admirals, officers, sailors. The history of the Black Sea Fleet is full of heroic pages. This Mediterranean hike squadron of Admiral Fyodor Ushakov, during which were released on the Ionian Islands and stormed the island of Corfu, and the victory of the squadron of Vice Admiral Dmitry Senyavina in the Dardanelles and Battle of Athos in 1807 year, and the famous Battle of Navarino, held 8 (20) in October 1827 of the year between the combined squadron of the Russian Empire, Great Britain and France on the one hand, and the combined Turkish-Egyptian fleet on the other. The defeat of the Turkish fleet in this battle brought the victory of the Greek national liberation revolution closer. In the Battle of Navarino, the Azov 74-gun sailing battleship, the flagship of the fleet commanded by the captain of the 1 rank Mikhail Petrovich Lazarev, later became the famous Russian admiral and commander of the Black Sea Fleet.

Remained in the history of the fleet 18-gun military brig "Mercury", which in May 1829, during the Russian-Turkish war (1828-1829), joined the battle with two Turkish ships of the line won over them. Commanded the brig, Captain-Lieutenant Alexander Ivanovich Kazarsky. The feat of the brig "Mercury" is immortalized in works of art, and the brig itself was awarded a stern St. George flag.

By the middle of the XIX century, the Black Sea Fleet became the best sailing fleet in the world. By this time, it consisted of 14 sailing battleships, 6 frigates, 4 corvette, 12 brigs, 6 steam frigates and other ships and vessels. The Crimean War of 1853-1856, which the Russian Empire fought against a coalition of hostile countries - Britain, France, the Ottoman Empire and Sardinia, was a real test for the Black Sea Fleet. It was the Black Sea Fleet that took one of the main attacks of the enemy, the sailors and officers of the fleet fought not only at sea, but also on land, being one of the main forces in the defense of Sevastopol and the Crimea as a whole. 18 (30) November 1853, a squadron commanded by Vice Admiral Pavel Stepanovich Nakhimov, utterly defeated the Turkish fleet in the Battle of Sinop, after which Great Britain and France entered the war on the side of the Ottoman Empire, knowing that the sultan could not support them to cope with the Russian Empire and then Russia will be able to gain control over the Bosphorus and Dardanelles.

The inequality of forces and capabilities of the Russian empire and the coalition of European states opposing it led our country to defeat in the Crimean War. As a result of the war, according to the Paris Peace Treaty of 1856, Russia was deprived of the right to maintain a fleet on the Black Sea. For the needs of the coastal service of Russia were allowed to have on the Black Sea, only six steam ships. But as a result of the flooding of the fleet during the defense of Sevastopol, there were not even so many warships on the Black Sea, therefore six corvettes were transferred to the Black Sea from the Baltic Sea. After restrictions were lifted in 1871, the Black Sea Fleet began to revive rapidly. The new fleet was built as a steam-powered armored vessel, with the battleships of the Black Sea Fleet being more powerful than the battleships of the Baltic Fleet. The strengthening of the Black Sea Fleet was due to the fact that at that time Russia was considering the Ottoman Empire and England behind it as more likely opponents than Germany on the Baltic Sea or Japan on the Pacific Ocean.

The 20th century saw the Black Sea Fleet as the most powerful fleet of the Russian Empire, having 7 squadron battleships, 1 cruiser, 3 mine cruisers, 6 gunboats, 22 destroyer and other ships. The development of the fleet continued: by 1906, it included 8 battleships, 2 cruisers, 3 mine cruisers, 13 squadron destroyers, 10 destroyers, 2 mine vehicles, 6 gunboats, 10 transport ships. The revolutionary events of 1905-1907 did not pass by the fleet. It was on the battleship "Prince Potemkin-Tavrichesky" and the cruiser "Ochakov", which were part of the Black Sea Fleet, the most famous performances of revolutionary sailors took place.

During World War I, the Black Sea Fleet had to face German ships in the Black Sea, which had more outstanding technical characteristics. However, then, due to the mining of the exit from the Bosphorus, the enemy ships were not able to penetrate the Black Sea before the 1917 year. After the October Revolution 1917, fleet management was disorganized, in December 1917 - February 1918. more than 1000 officers, including retirees, were killed in the navy. In 1919, the Black Sea Fleet was established in Novorossiysk under the control of the Armed Forces of Southern Russia, and at the end of 1920, during the evacuation of the troops of Baron Peter Wrangel, most of the ships of the Black Sea Fleet left Sevastopol for Constantinople.

As early as May 1920, the Naval Forces of the Black and Azov Seas were formed, which participated in battles against the Black Sea Fleet of the All-Union Socialist Republic of Ukraine. In 1921, on their basis, the restoration of the Black Sea Fleet as part of the Workers 'and Peasants' Red Fleet began, which ended by 1928-1929. In the first two decades of Soviet rule, the Black Sea Fleet rapidly modernized. In the fleet appeared marine aviation, air defense, coastal defense system was strengthened. 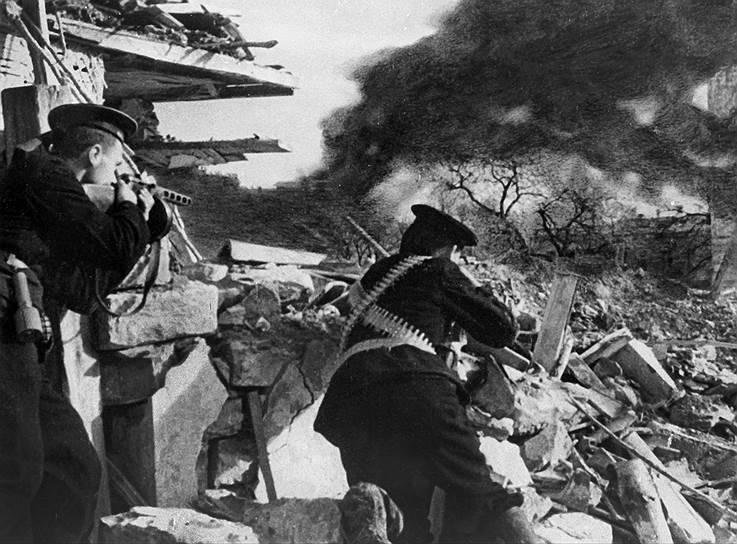 By the beginning of the Great Patriotic War, the Black Sea Fleet includes at 1 battleship, cruiser 5, 3 leader, 14 destroyers, submarines 47, 2 brigade of torpedo boats, divisions of minesweepers, patrol and anti-submarine boats, more than 600 aircraft as part of the military air force fleet, coastal artillery and air defense. The Black Sea Fleet consisted of the Danube and Azov flotilla. The Black Sea sailors were to take the brunt of Hitler’s Germany, which was making its way to the Crimean Peninsula. The Black Sea Fleet defended Odessa and Sevastopol, participated in the Kerch-Feodosiya operation, the battle for the Caucasus, the Novorossiysk landing operation, the Kerch-Eltigen landing operation and many other major sea and land battles of the Great Patriotic War.

In the post-war period, the Black Sea Fleet played a crucial role in ensuring the Soviet naval presence in the Mediterranean and the Atlantic Ocean, being one of the key components of the enemy deterrence system in the region. 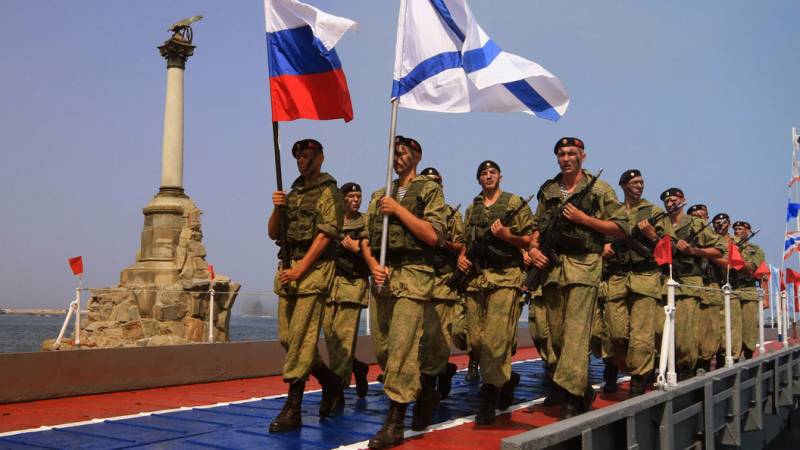 Ctrl Enter
Noticed oshЫbku Highlight text and press. Ctrl + Enter
We are
Day of the Baltic Fleet of RussiaMilitary doctrine of the Russian Federation
Military Reviewin Yandex News
Military Reviewin Google News
20 comments
Information
Dear reader, to leave comments on the publication, you must sign in.