What awaits the Black Sea Fleet of Russia

5 May 2012
109
The Black Sea Fleet of Russia is the operational and strategic association of the Russian Navy in the Black Sea. Main base fleet is Sevastopol, located on the territory of the Crimean peninsula, owned by Ukraine. To fulfill the tasks assigned to the fleet, its composition should include surface ships for operations in the ocean and near sea zones, diesel submarines, as well as marine missile, anti-submarine and fighter aviation and a number of units of coastal troops. Despite the fact that the Black Sea Fleet can be attributed to one of the country's most belligerent fleets, it never stood out for its special combat power. Along with this, the collapse of the USSR in 1991 and the subsequent division of the fleet between Russia and Ukraine significantly undermined its combat capabilities. Over the past 20 years, the combat strength of the fleet has decreased by almost 20 times.

According to a number of experts, even the relatively civilized section of the Black Sea Fleet would completely undermine its combat capability, since even in Soviet times this fleet did not have outstanding combat potential, for which the naval wits in the Ukrainian manner deciphered its abbreviation as “Ch Flot, fleet”, This joke in 2012 sounds even more relevant than before. Whatever the composition of the fleet during the existence of the USSR, it numbered 835 ships and vessels of almost all existing classes that served military and civilian personnel around 100, and was a force to be reckoned with. In the water area of ​​the Black Sea, more than 000 combat ships were deployed in full combat readiness, of which 400 belonged to impact surface forces. The fleet included 45 helicopter cruisers - "Leningrad" and "Moscow", 2 bomber with nuclear weaponsThe 10 strike ships and 30 missile frigates. 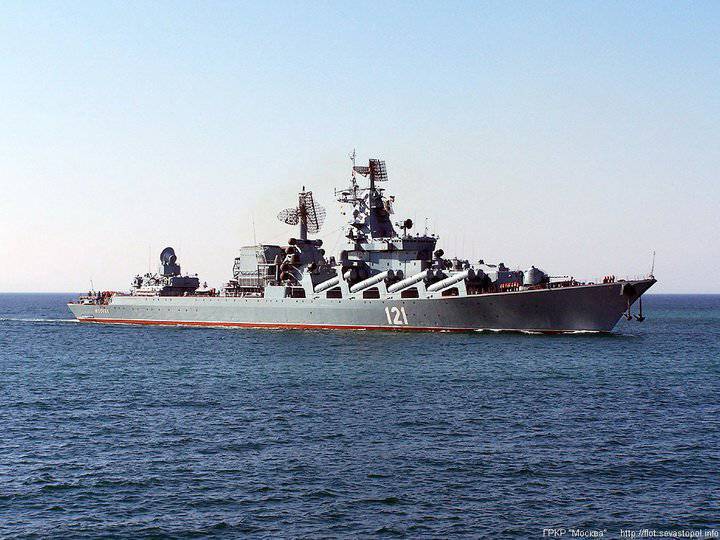 GRKR "Moscow" - the flagship of the Black Sea Fleet
The underwater component of the Black Sea fleet has always been its underwater component, which consisted of 26 diesel submarines belonging to obsolete types. It was believed that this weakness is fully compensated by the air component. The fleet had more than 400 aircraft and helicopters, of which 140 could carry nuclear weapons on board and solve combat missions at a considerable distance from their bases. Also in the fleet was a brigade of marines deployed in Sevastopol, part of the coastal defense - a motorized division in Simferopol. Fleet personnel consisted of 75 000 officers and sailors. In its combat power, the Soviet Black Sea Fleet certainly exceeded its only “opponent” in the region - the Turkish Navy.

In the Mediterranean Sea in a state of constant alert, the forces of a separate Mediterranean squadron were deployed. Each year, the ships and fleet ships exited through the straits to the Mediterranean basin, its home network stretched from Izmail to Batumi, parts of the fleet were scattered over a large area, including Ukraine, the Crimea, Moldova, Russia and Georgia. By the beginning of 100, the value of the whole property of the Black Sea Fleet was more than 1992 billion US dollars.

Modern realities are such that Ukraine actually has no fleet, completely destroying almost all the ships that it inherited after the division of the Soviet Black Sea Fleet. Unfortunately, Russia, which for all the last 20 years has not commissioned a single modern ship of the 1 and 2 ranks, has not far gone away in this matter. This state of affairs was due to the economic weakness of the two states, especially Ukraine. Both states have allowed the loss of their productive capacity, breaking the cooperation of leading industrial enterprises and design bureaus. It should be understood that the fleet is a very expensive type of aircraft. Its content requires huge financial resources from the state. It is no coincidence that there is such a popular expression: “To destroy a small country, present it to a cruiser.” 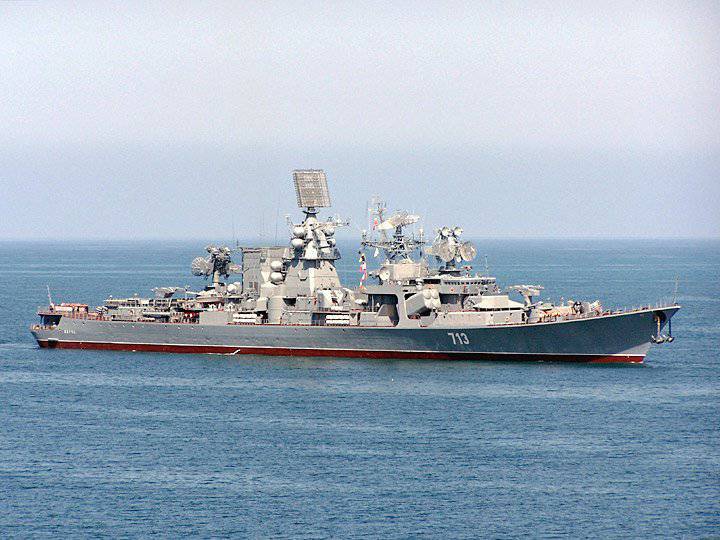 BOD "Kerch"
The unstable economic situation of Russia has led to the fact that at present the Black Sea Fleet is a fleet with virtually no aircraft and submarines (the fleet includes 2 of old diesel submarines of the B-380 and B-871 "Alrosa" projects) missile cruiser "Moscow", which for 30 years of his service did not become newer. In its current state, the Black Sea Fleet increasingly resembles a flotilla, having warships of various classes in 40. The flagship of the fleet remains the missile cruiser "Moscow". It consists of 2 large anti-submarine ships, 3 patrol, as well as various small reconnaissance and rocket ships, landing and rescue ships, sea trawlers. The service life of most of them is 30-40 years. A kind of symbol of the fleet, in every sense of the word, can be called the rescue ship "Commune", which in the 2013 year marks 100 years. And although this ship has been modernized and today is equipped with an underwater robot Seaeye Panther Plus, it is quite difficult to call it a serious enhancement by the Black Sea Fleet. According to a number of experts, the Black Sea Fleet must be restored almost from scratch.

The main striking force of the fleet today can be called the 11 brigade of anti-submarine ships, which consists of the largest 5 units with the greatest combat capabilities. The brigade includes the flagship of the fleet Guards missile cruiser (GRKR) "Moscow" (in the fleet from 1983 of the year), a large anti-submarine ship (BOD) "Kerch" (in the fleet from 1975 of the year), patrol ships (SKR) "Smart" , "Ladny", "Inquisitive" (included in the fleet in 1969, 1981 and 1982, respectively). 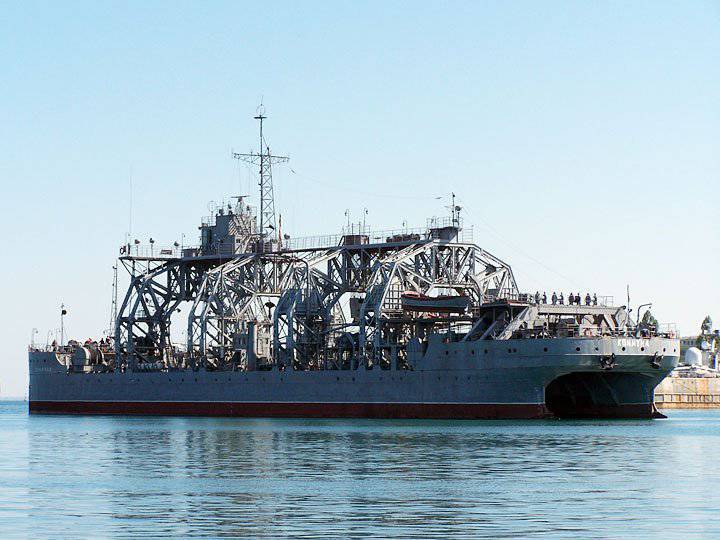 Rescue ship "Commune"
It should also be noted that the Russian presence in the Black Sea region would not be complete without naval aviation. Today, the Russian Black Sea Fleet has approximately 35 aircraft and 20 helicopters. The fleet includes an assault air regiment armed with Su-24 front-line bombers (20 vehicles), as well as a separate mixed aviation regiment with anti-amphibious aircraft Be-12, military transport aircraft and Mi-8 helicopters. In addition, there is a separate 25 th anti-submarine helicopter regiment, equipped with ship Ka-27, sea Mi-8 and Mi-14. The total number of the Black Sea Fleet of Russia in the Crimea today is estimated at 14 000 people.

The Russian Black Sea Fleet suffered various changes during the various transformations and the collapse of the Union in 1991. Currently, this fleet is promised rapid development and delivery of a large number of modern warships (large by today's standards). So far these are only promises. For their implementation (or failure) we can all follow in the coming years. It is important to understand that in the formation of the fleet an important role is played by the tasks that will face it in the next 10-20 years. In the next decade, the Russian Black Sea Fleet will most likely have to solve the following range of tasks: protection of internal and territorial waters, support for land operations in the Black Sea region, protection of sea communications in the near and far sea and ocean zones, as well as diplomatic missions. 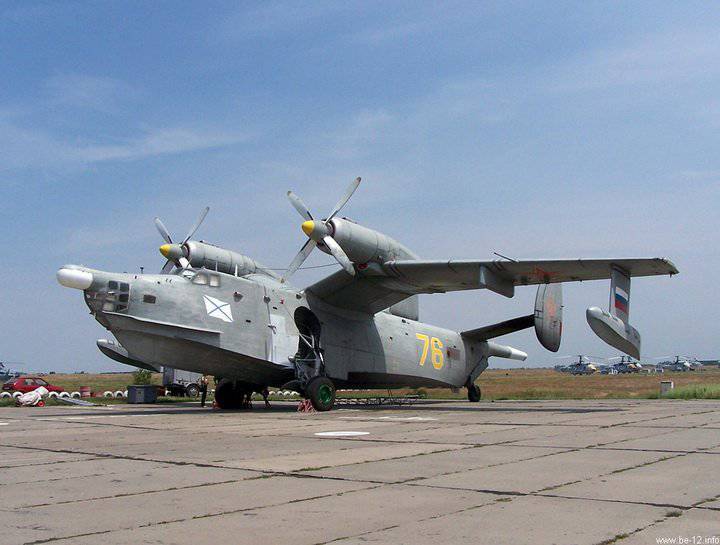 Amphibious aircraft Be-12
To solve these problems, the existing number of ships is enough, but they all need to be updated. Current fleet missions involve the creation of a fleet core from small (low-cost) rocket ships (the so-called “mosquito” fleet), which can cover base areas and internal waters, as well as small landing operations. For single trips to the Mediterranean region, the fleet will need several ships of 1-2 rank. To create a search and attack tactical grouping that will be able to counteract large enemy enemy ship formations, you need rank 1-2 multipurpose ships (mainly 2), which will be able to solve anti-submarine missions and provide cover for amphibious fleet operations. It is quite obvious that in the near future Russia is not going to build a fleet that could withstand the sixth US fleet, which feels itself the master in the Mediterranean. In order to deploy permanent combat duty in this region, huge amounts of money are needed, which Russia simply does not have at this stage of its development.

A radical renewal of the Black Sea Fleet is planned to be carried out as part of the state armaments program, calculated up to the 2020 year. During this period, the fleet must be replenished with 6-th new frigates of the 1135.6 project, 6-th modern diesel submarines of the 636.3 project, the same number of CKR of the 20385 project (must be commissioned before the 2017-2018 of the year), and also 10-th new rocket and small artillery ships belonging to new generations. By 2025-2030, the fleet should have in its composition 35-40 modern warships. 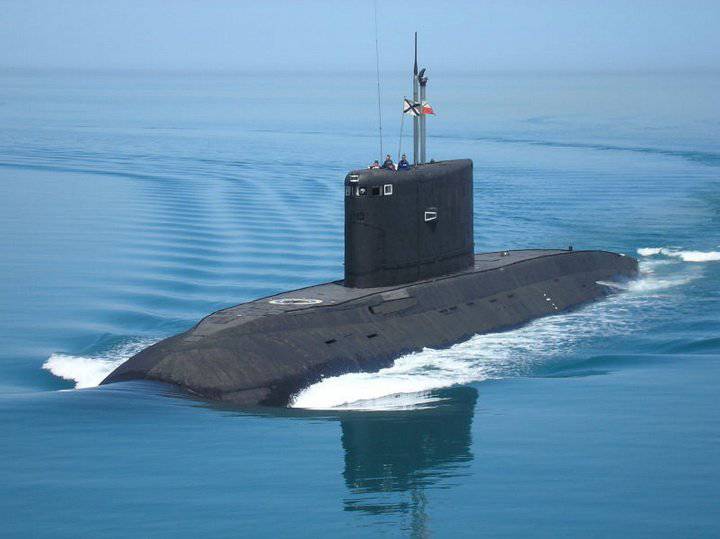 Diesel submarine project 636 "Varshavyanka"
According to fleet commander Rear Admiral Alexander Fedotenkov, submarines of the 636 project have already been laid at the Admiralty Shipyards in St. Petersburg and will come to the fleet before 2017. The fleet expects to receive the first three boats in 2014 a year, another one in 2015 and the remaining two in 2016. All these boats will be the main for the creation in the fleet of a full-fledged submarine brigade, which will be based in Novorossiysk, where a new fleet base is being built and in Sevastopol.

Any modern fleet is impossible to imagine without the aviation component. When the outdated Be-12 seaplanes built back in the 1960-s are hard to say, it is hard to replace the already-aged Su-24М bombers released in 1970-80-s already not far off. The strike component of the fleet will be updated due to the 12 multipurpose fighter Su-30CM. This aircraft is a modification of the Su-30MKI aircraft, a fighter plane that was specially designed for the Indian Air Force. Russian modification of the machine will receive a number of systems of western production, but at the same time the capabilities of the aircraft on the use of Russian aircraft armament will be expanded. The upcoming purchase of the Su-30CM pursues the same goal as the construction of frigates, patrol ships, submarines: this is a system update of all the most important elements of the fleet's combat potential. A squadron of modern multi-role fighters that can carry supersonic anti-ship missiles can significantly increase the combat potential of the Russian Black Sea Fleet. If it speaks about the renewal of the helicopter fleet, there should not be any particular problems, especially given the growth rates that Russian enterprises demonstrate. 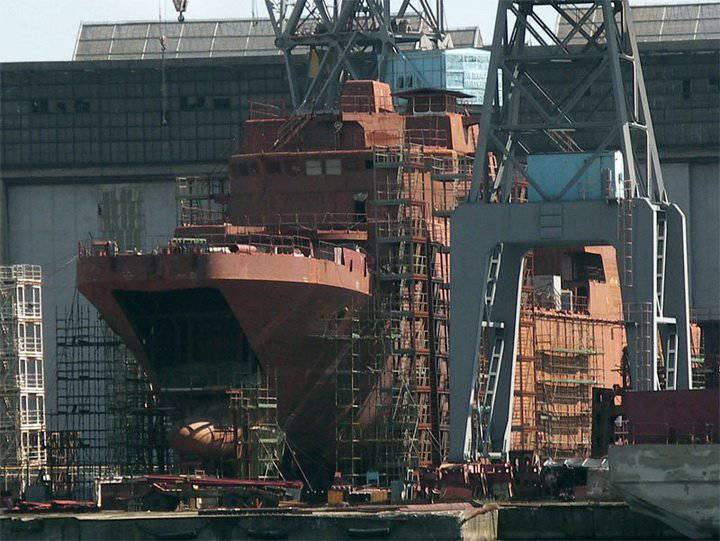 BDK "Ivan Gren" at the stage of construction 2011 year
The situation is relatively good with the marines. Today, there is a crew of about 3000 people in the fleet. This compound can solve problems of the most different kinds: from participation in peacekeeping operations and the protection of the fleet in its main base, to the military actions of the army in the coastal direction. Only big landing ships, which currently have 7 units in the fleet: 3 obsolete 1171 BDK, which were commissioned from 1966 to 1975 year and 4 of Polish-built 775 landing craft, which were put into operation in 1986 -1991's.

Airborne helicopter-carrying docks "Mistral" acquired by Russia from France, if they appear on the Black Sea, it is only for propaganda or educational purposes. Placing ships with a cruising range of 20 000 nautical miles and months of autonomy for permanent service in the “pool” of the Black Sea does not have any meaning. Replace the Black Sea BDK need ships of the same class. The construction of the lead ship of the 11711 project, bearing the name of Ivan Gren, is nearing completion, it is expected that the new BDK will be launched in May 2012 and will be part of the fleet in 2014. To date, there is information about the construction for the Russian Navy 6 ships of this class.