10 May 2018
17
The MAG-7 smoothbore weapon, the brainchild of the South African firm Technoarms, can undoubtedly be classified as armory exotics. Moreover, not only because of the country of origin, but also because of its design and appearance. This 12-gauge police pump-action shotgun "copies" the famous Israeli Mini-UZI submachine gun. 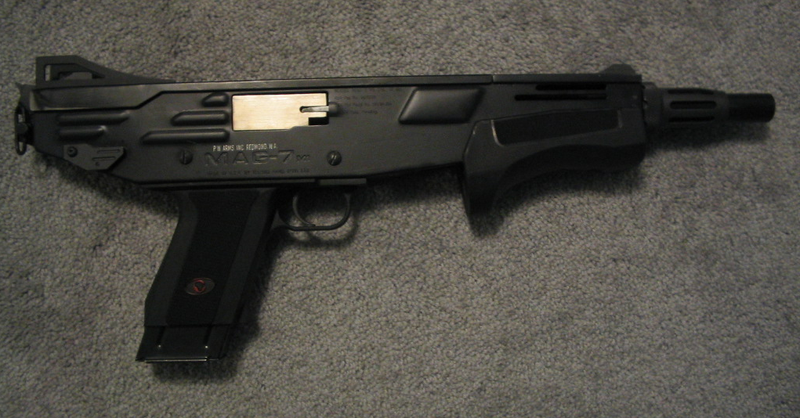 According to a legend voiced by marketers Tehnoarms PTY Ltd, this is no coincidence: they say that the South African police special forces, for which, in fact, the gun was created, wished that it was as close as possible to the UZI PP, which was its main weapon to which the fighters were accustomed.

MAG-7, the target audience of which were police officers and security company employees, is designed for urban battles in cramped conditions - in buildings, in slums. The minimum length (total 55 cm with barrel length in 320 mm), combined with a good balance for shooting from the hip and from the hip, makes this compact weapon very comfortable in such conditions. It can be used ammunition with a traumatic, non-lethal action - plastic canister and rubber bullets, as well as special cartridge for knocking doors. 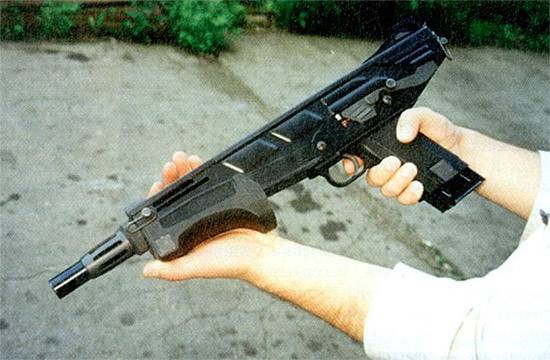 The MAG-7 is a magazine shotgun with pump-like reloading principle. The cartridges are fed from a detachable box magazine with a capacity of five cartridges, placed, as in the prototype UZI, in a pistol grip. So that such a handle could be held in the hand, the cartridges had to be shortened. The sleeve length of the 12 caliber cartridges used in this gun is 55 mm.

Of course, such dimensions seriously limit the range of ammunition. In particular, the possibility of using magnum and half-magnum cartridges, or, for example, equipped with a sabot bullet with a long polyethylene stabilizer container, is excluded.

However, the weapon is intended for firing at distances that are not much higher than the pistol, which is also due to the short barrel. For which the cartridge with a weakened linkage is optimal.

The receiver is made of pressed steel with a thickness of about 3 mm, with stiffeners. The handle and handguard are made of high-strength plastic.

The whole design of the shotgun is simple and very reliable. On the company's commercials, the disassembly of the barrel is done without rushing for 20 seconds. On the same rollers they shoot from the MAG-7 shotgun taken from a tub of water or from under a layer of sand.

The gun is tenacious, with a large margin of safety, factory tests are carried out with a charge that develops pressure up to 100 MPa.

The manufacturer denotes a guaranteed shotgun life in 40 000 shots, and there is no reason to doubt this figure.

The barrel, however, is not chrome-plated, “black,” that is, more demanding of care. 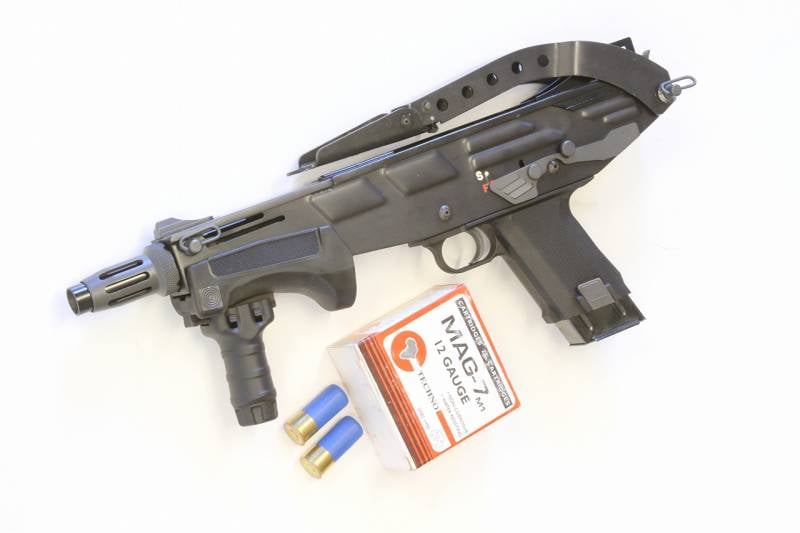 In the basic version, the shotgun has no stock, but, optionally, it can be equipped with a folding steel shoulder rest.

In general, the gun turned out quite thoughtful and successful. But not by the time. MAG-7 was released in the 1995 year, when violent exchanges of white policemen with militants of the Spear of the Nation organization, the armed wing of the African National Congress, took place in the slums. The year before, the ANC won the parliamentary elections, the country's image began to change radically and rapidly. And the novelty in the law enforcement agencies of South Africa turned out to be practically unclaimed. 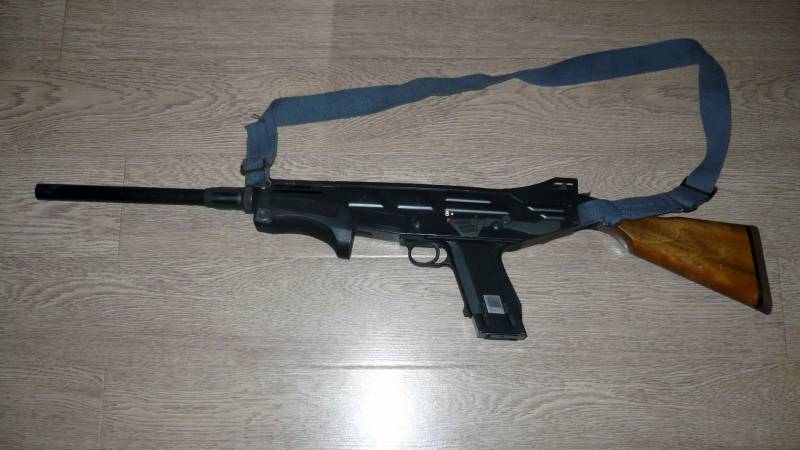 Not wanting to abandon successful development, Technoarms decided to explore overseas markets. First of all, the largest - American and Russian. But due to the small overall dimensions and the short trunk of the MAG-7, it is prohibited by law to civilian traffic. And the model MAG-7М1 was developed taking into account the requirements of the American and Russian legislation. This gun had an integral wooden butt, and the barrel with a “cylinder” was extended to 500 mm. 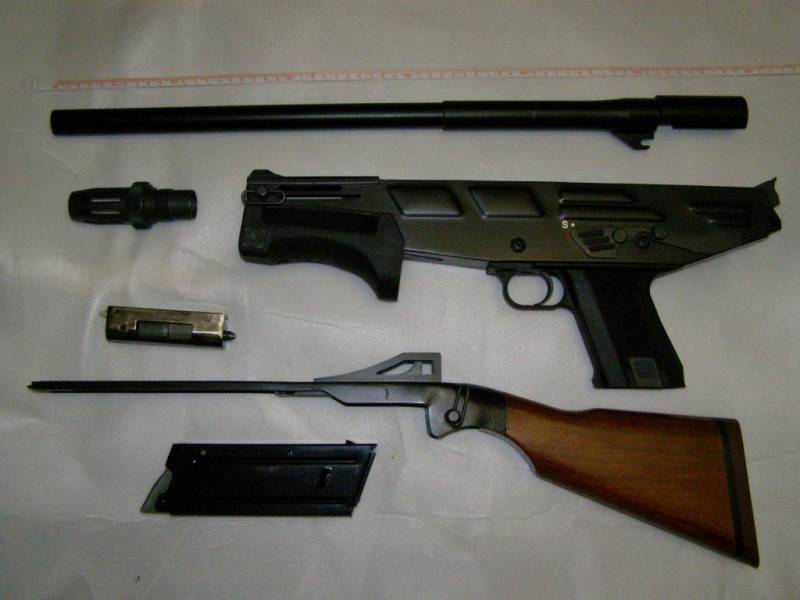 The weapon that turned out at the exit cannot be called graceful: the forms seem to be cut down with an ax. But there is a fascinating brutality in it, to which I could not remain indifferent.

The purchase of this unusual gun was not in my plans, it all just coincided: the presence of an extra “green” (license to purchase a smooth-bore weapon), some “free” amount of money and the fact that I went to the “Perun” gun shop near Moscow station Metro Dynamo, which was the official dealer of the South African campaign.

Taking the gun in my hands, I immediately noticed the uncomfortable wide grip and great weight of the gun ... and bought it. Together with the gun, for which 8 thousand rubles were paid (it was in 2008 year), I also bought several spare shops (they cost a thousand each) and four packs of shortened shotguns “Record”, produced specifically for MAG. I was driving home, tormented by doubt: was it worth buying this strange device?

However, the very first visit to the shooting range dispelled some of my doubts. The gun suddenly turned out to be very comfortable when shooting. According to subjective sensations, the return is lower than that of Saiga-12, a very convenient recharge and positioning of the forearm. Due to the short sleeve he has a short stroke, which allows him to shoot very quickly. After some preparation, you can shoot at the speed of a semi-automatic. When fired due to the large mass of well-thought-out layout and compensator (three cuts are made at the end of the barrel), the gun practically does not lead away from the aiming line, which also allows you to conduct tempo firing. Even in the “fenced-in” version, the gun is quite compact - see the 96 cm, which is quite comparable with the size of the AK.

The shop is fixed by the key on the left It can be changed quickly and easily.

Sights - massive front sight and rear sight, located on the rear of the receiver. It is close to the eye, which creates a diopter-like effect. At first, a little bit unusual, but when you get used to it, it becomes convenient, especially when shooting offhand.

The MAG store becomes very good in the pouches designed for the AK store, which is also very convenient.

The specific cartridge made me become a “roll-over”, that is, to engage in reolding. The size of the liner with a standard powder sample makes reduce the weight of the projectile. So, instead of the usual caliber for the 12 cartridge with the 70-mm sleeve, nine 8,5-mm ratchecks for the MAG have to be limited to six. By the way, you can shoot a gun with a regular cartridge (the chamber has a length of 70 mm) by inserting it through the window of the receiver. 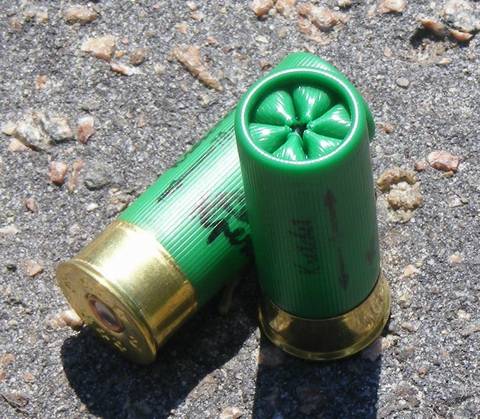 A serious advantage of the MAG is its omnivorous - it works great with repeatedly re-loaded sleeves. Some I used up to seven times (until the cap began to hang in the socket) and did not even calibrate. Other users of this device claim that it works great with metal sleeves, cut to 51 mm.

Very good results are given by the gun with the Poleva-1 bullet (it needs to shorten the walls of the container a little bit) and cap Lee.

I note that the hunting use of MAG-7М1 I did not even consider. At one of the weapon forums, the owner of this gun, which in Russia can be 180 people (so many units were sold), called on "colleagues" to share their experience in hunting. But there was no response.

I must say that the civilian version of the MAG-7 has lost the main advantage of its prototype - compactness. While maintaining all the disadvantages (large mass and low power cartridge, not too comfortable pistol grip).

As a result, as a niche, MAG-7М1 is, in general, a good and curious gun, only entertaining shooting and a hypothetical “self-defense” can be seen. Which was the reason why the battle of South African gunsmiths for the Russian market was lost.

Well, and, having played enough, I sold my gun.