Five types of weapons, dangerous for the shooters themselves

April 25 2018
58
While firing at the target, the shooter must be confident in the safety of their weapons. However, not all samples of small weapons comply with safety requirements and have acceptable performance. Some examples of the past and the present differ from other developments by their characteristic problems that can lead to injuries or death. The American edition of The National Interest has compiled its anti-rating list of common and well-known, but unsafe types of weapons.


21 April edition has published a new article titled "The 5 Most Dangerous Guns (for the Shooter) on the Planet" - "5 is the most dangerous weapon on the planet (for the shooter)." The publication of the permanent author of the publication Charlie Gao was assigned to the headings of The Buzz and Security. As the name suggests, the author tried to make the top five most unsuccessful in terms of the safety of samples of modern small arms. The dubious list includes several well-known samples of three different classes.

At the beginning of his article, Ch. Gao recalls the obvious thing: when developing almost any type of small arms, designers take into account the safety of the operator. Numerous mechanisms are designed to fulfill such requirements and prevent unwanted shots.

However, some samples are unsuccessful in this regard. Their safety systems may simply not work due to various design problems. Other products normally shoot when you pull the trigger, but they are dangerous to the shooter due to the presence of fast moving parts or bursting hot gases. Ch. Gao proposes to consider some of the most dangerous weapons for the shooter.

First on the list of unsuccessful weapons, the author introduced the Brazilian Taurus PT 24 / 7 self-loading pistol. This product has been in mass production since 2004, and was actively supplied to different customers. However, a couple of years ago it was criticized. 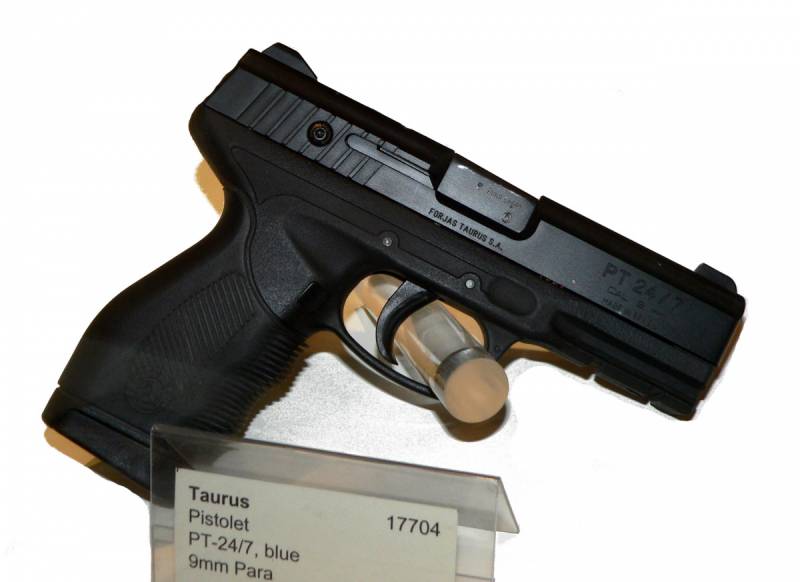 Ch. Gao points out that in theory the PT 24 / 7 pistol from Taurus should be of acceptable safety. In addition to the automatic fuse, it has several automatic devices. Provides a device to block the drummer and some other parts to prevent accidental shot when a weapon falls. However, in practice, it was found that some of these tools do not work and do not provide adequate security.

Among other structures, pistols PT 24 / 7 received the Brazilian police. Her staff found that some of these samples can fire a shot without pulling the trigger. When it turned out, the mass recall of serial pistols began. A little later, a collective lawsuit against the manufacturer appeared. The document stated that the pistol could fire when the hook was pressed, even with the non-automatic safety switch on. Also, the shot occurred when falling on a hard surface. Probably due to similar problems and bad reputation, Taurus decided to remove the PT 24 / 7 pistol from production.

The second participant in the rating is the British submachine gun STEN. This product is the most simple design appeared during the Second World War and allowed to quickly carry out the desired rearmament. However, it was not without problems.

Ch. Gao recalls that the STEN submachine gun was the main weapon of its class in the armies of the countries of the British Commonwealth both during the Second World War and after it. But despite this, it was quite dangerous for users and others. There are many cases where the "Wall" shot when falling to the ground. Moreover, in some cases, the submachine gun uncontrollably shot the entire store. During the spontaneous firing of a burst, a fallen weapon could rotate, sending bullets in all directions.

The cause of some of these incidents was the shooters mistakes. Submachine gun STEN could shoot as a result of a strike on the butt plate. At the same time, the bolt took off, delivered the cartridge and fired. In addition, due to some features of the design, this weapon did not always respond correctly to pressing the trigger. This problem increased the level of danger.

The following sample, highlighted by The National Interest, is a German-made Blaser R93 hunting carbine. He went to the series in 1993 year and was made before 2016-th.

Ch. Gao calls the R93 carbine an expensive high-end hunting weapon. One of the main features of this product was a direct action sliding shutter, featuring high speed. Due to the rapid movement of the shutter, the shooter had the opportunity to make a second shot less than a second after the first. However, due to improper operation of the mechanisms, the shutter could break off and hit the shooter in the face.

According to official statements of the manufacturer, such problems can occur only when using self-loaded cartridges that create excessive pressure in the barrel. In this case, there is conflicting information about the disruption of the bolt when using prefabricated ammunition. Nevertheless, the R93 carbine still has a certain danger to the shooter: other rifles with similar automation usually do not tend to “shoot” the bolt in the face. Probably, Blaser recognized its mistakes, and now, instead of the carbine, the R93 offers customers the R8 product with improved mechanics, which prevents the shutter from breaking.

Next, the author makes a trip to the past and recalls the Winchester Model 1911 self-loading smoothbore rifle, produced from 1911 to 1925 year. This weapon was created as a response to the Browning Auto-5 rifle from a rival company, but it had a number of serious flaws. It is curious that some problems were associated with the need to bypass existing patents and the application of not the most successful solutions.

As pointed out by Ch. Gao, the fact that the Winchester Model 1911 was one of the world's first self-loading rifles had a negative impact on performance. This gun did not differ sufficient security. So, one of the problems was associated with automatics based on a rolling barrel. To prepare a weapon for a shot, some arrows pressed the butt into the ground, and then pressed their hands on the barrel. This could lead to accidental firing, injury or even death.

However, this was a problem in the training of users, and not in the construction of weapons. In this case, the design was also not perfect. To slow down the bolt and barrel on the Model 1911 rifle, felt rings were used that did not have high strength and durability. Rings quickly wear out and after the next shot could simply fall apart. The improper operation of the weapon without the means of braking again led to certain risks. As a result, the gun got the unflattering nickname "leaving widows."

The latest example of unsuccessful and unsafe small arms is the 94 Type pistol of the Japanese designer Kijiro Nambu. This product was created in the early thirties and immediately showed all its minuses. K. Nambu planned to make a cheap and easy-to-use gun, but the real “Type 94” was more expensive than its predecessors, and also had serious security problems. However, this did not prevent to adopt it. Until the end of World War II, over 70 thousand of such pistols were manufactured. 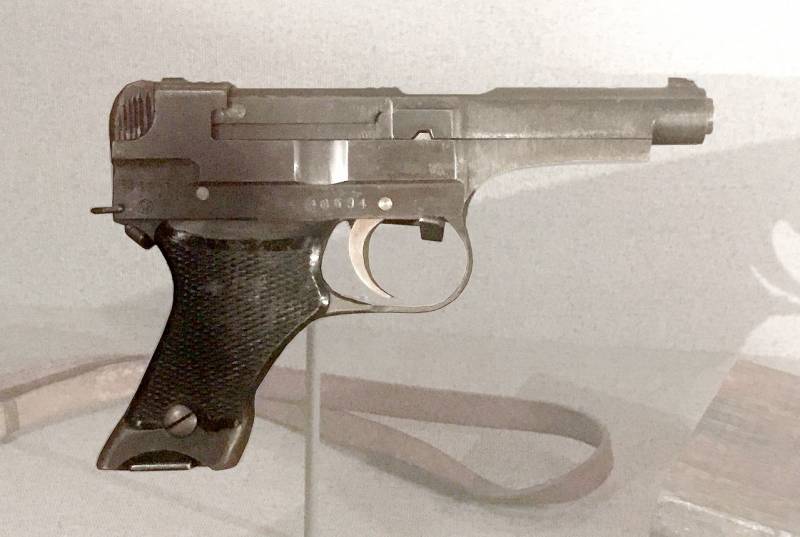 Charlie Gao calls the Nambu Type 94 pistol, perhaps the worst weapon of its class from all used during the Second World War. The main disadvantage of such weapons, he calls the unsuccessful design of the firing mechanism. When the USM was cocked, some of its parts protruded beyond the frame and the casing, and could work as a second trigger. An accidental shot could have happened for a variety of reasons: from a strike, when trying to put a weapon in a holster, or simply from an accidental touch. At the same time there was a risk to hook the protruding lever when working with a fuse.

It should be noted that the publication of The National Interest lists far from all the unsuccessful and unsafe samples of small arms. If desired, you can find other products that would easily take their place in the anti-rating according to the degree of danger. Nevertheless, according to the author of the article “The 5 Most Dangerous Guns (for the Shooter) on the Planet”, the five most dangerous to use samples look exactly like that.

It is curious that all of the above-listed C. Gao pistols, rifles and shotguns were unsafe due to design or technological errors. In one case, the automatic fuse did not cope with shaking, in the other there were malfunctions in the operation of the trigger mechanism, and in others there were problems with the strength of mechanisms and parts. It is easy to see that almost all of the samples listed had no problems at the concept level, while shortcomings related to the implementation of the main ideas.

Probably, all this could be corrected with proper development work, including testing and fine-tuning of finished samples. Nevertheless, the five products listed went into the series in the configuration that led to problems and risks. Numerous accidental shots, injuries or even death hit the reputation of these weapons, and in some cases led to the cessation of production.

Ctrl Enter
Noticed oshЫbku Highlight text and press. Ctrl + Enter
We are
The National Interest: Russian army snipers have rifles and cartridges capable of penetrating US body armorWhat should be a modern sniper (part of 1)
Military Reviewin Yandex News
Military Reviewin Google News
58 comments
Information
Dear reader, to leave comments on the publication, you must sign in.