Sapsan, Taran and Pischal against UAVs

April 23 2018
18
Unmanned aerial vehicles of various classes and types have long been used in the military sphere, and for some time now they are also mastering civilian “specialties”. The widespread use of such equipment, which can pose a threat in certain situations, leads to the need to create specialized means of dealing with it. A few days ago, new Russian developments in this area were announced. The Avtomatika concern, specializing in information security systems, presented three complexes for fighting unmanned vehicles at once aviation.


Through news agency RIA News The press service of the Avtomatika Concern, which is part of the Rostec State Corporation, has published information on its latest developments, which may be of great interest to the army and other structures. It is proposed to fight UAVs of different classes with the help of three multifunctional complexes with various characteristics and capabilities. The new family includes the stationary Sapsan complex, the Taran mobile system and the Pishchal portable device. All of them have similar capabilities, but differ in features of deployment and application. 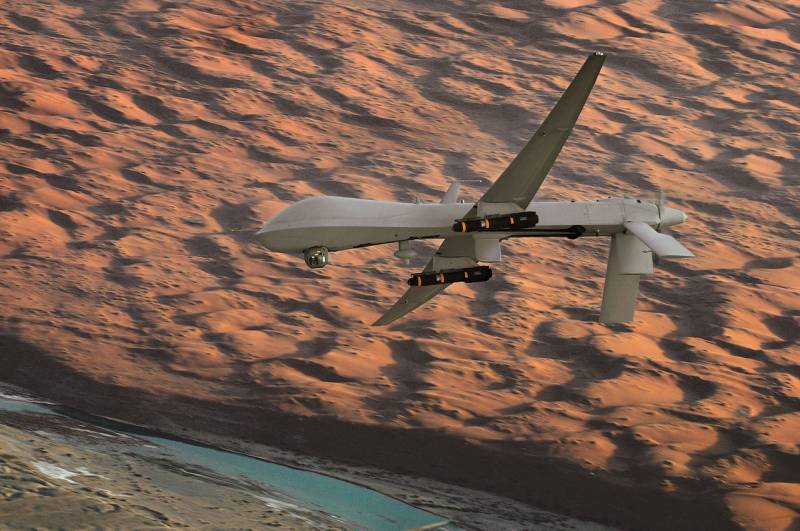 The largest representative of the family of multifunctional complexes is Sapsan. It is performed as a stationary system designed for long-term work in one place. How this complex should look like has not yet been clarified. In the open access images of the entire "Sapsan" as a whole or its individual components are missing. Perhaps they will be published in the near future.

At the same time, the concern “Avtomatika” demonstrated the appearance of the main element of the mobile complex “Taran”. It is proposed to install its antenna device in position using a light tripod. All necessary antennas are fixed on the X-shaped support. It uses six antennas, covered with radio transparent covers, and the same number of units equipped with a large number of rod antennas. It also appears that the control station, communications equipment, etc. are part of the Taran complex.

The third new development is a portable complex “Pishchal”, made in the form factor of a rifle. A device weighing about 3 kg is built on the basis of a light rifle-type lodge and has the appropriate controls. Instead of small elements weapons The necessary electronics is fixed on the bed. Ahead, in place of the trunk, there is a large block with several transmitting antennas covered with a common casing of complex shape. From the point of view of ergonomics and the method of using “Pischal”, it is obviously similar to the existing small arms.

The developers of promising multifunctional electronic warfare systems clarified some of their features. Indicates that the work of the UAV depends on the three radio channels. One is used to receive operator commands, the second is needed for transmitting telemetry, video, etc., and the third is for receiving satellite navigation signals. All these channels are in different frequency ranges. In the case of military devices, there is a certain difficulty. Their on-board equipment has the function of frequency tuning: in the event of interference and suppression of one frequency, the receiver and transmitter switch to another.

According to open data, new complexes from the Avtomatika concern take into account this feature of unmanned vehicles and are able to counteract it. They include radio channel analysis systems capable of finding new operating frequencies of the enemy equipment. After that, the source of the so-called. slipping noise is rebuilt and suppresses the detected channel. If the enemy’s unmanned complex attempts to change the frequencies again, the electronic warfare device again finds them and muffles the useful signal with interference.

RIA Novosti quotes the chief designer of the new complexes, Sergey Shiryaev, about the consequences of the work of such EW systems. The specialist pointed out that the effect of the use of multifunctional complexes is approximately the same. UAVs "go crazy." The helicopter-type apparatus enters hover mode, it is swayed by the wind, which can lead to a flat spin and fall to the ground. UAV aircraft scheme continues to fly, but goes into an uncontrolled decline. As in the first case, such a flight ends with a collision with the surface.

The largest and most powerful multifunctional complex of the new family is Sapsan. According to published data, this system is able to deal with any type of unmanned aerial vehicles. It is equipped with a set of surveillance and detection. For searching and tracking air targets, it is proposed to use an optical-electronic station with a thermal imaging channel, a radar station and an electronic reconnaissance station. The maximum target detection range is up to 100 km.

Depending on the type of goal and the risks associated with it, a decision on further work may be made. Under certain conditions, the Sapsan can independently attack a target with a directed electromagnetic beam. Interference at different frequencies interfere with the operation of on-board electronics with a clear result. In addition, the complex can work in conjunction with the "traditional" air defense. Data on especially dangerous air targets can be transmitted to anti-aircraft complexes, which, respectively, are responsible for their destruction. 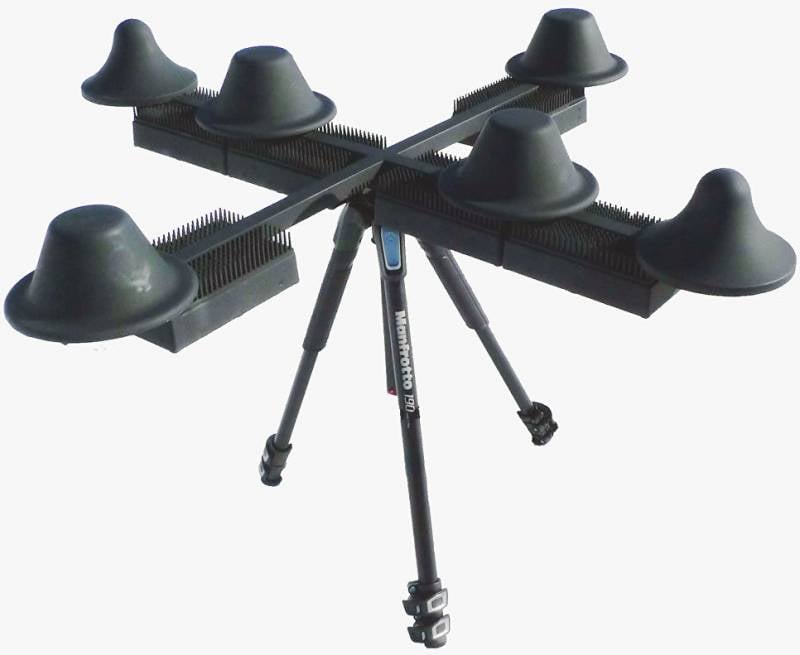 Mobile complex "Taran" has less high technical characteristics, but it is designed to solve other problems and uses other methods of work. This system is designed to protect stationary objects or equipment in positions, for which it is made as compact as possible and has the ability to quickly deploy.

The “ram”, like the stationary “Sapsan”, monitors the broadcast and looks for signs of the presence of the UAV. When a potentially dangerous object is detected above the protected area, a kind of dome is created from interference. UAVs can not get inside the protected space without damage, at least for combat effectiveness. Full operation of the aircraft in the radius of the "Taran" is excluded. The power of the transmitters of this complex provides the creation of a “dome” with a radius of over 900 m. They operate at different frequencies, but do not interfere with mobile communication and are harmless to people.

The portable complex “Pishchal” has similar goals and objectives, but differs in application methods. In his case, the search for targets is carried out visually, and for aiming at the found object, it is performed "in a rifle" mode. At the same time, suppression of communication channels and a satellite navigation receiver at a direct line of sight is provided. The built-in battery allows you to "Pischali" work for 1 hours. Like other complexes, a portable product is not dangerous for the operator. With sufficient transmitter power so-called. backward lobe of radio emission, directed towards the operator, meets safety requirements.

When developing a new family of electronic warfare equipment, Avtomatika Concern paid attention to surveillance and detection systems. Unmanned aerial vehicles, especially of the civilian sector, are small in size and are built with extensive use of plastic. As a result, they are extremely difficult to detect with existing types of radar stations.

In this case, the Sapsan, Taran and Pishchal complexes either have their own specialized means of observation, or are able to work with separate systems of such purpose. Developed passive and active means of observation. Passive type radar only receives radio signals from a target and determines its location from them. There are several models of such devices; their maximum detection range reaches 50-75 km. The active locator, in turn, is able to search for drones in an area with a diameter of 90 km.

According to open data, new projects of multifunctional complexes have already been brought to the test. Systems of three types, as well as, possibly, some related equipment, are tested at landfills, and must confirm the design characteristics. It will take some time to complete the checks, but it is already claimed that all work will be completed in the coming months.

According to current plans, by the end of the year, the Avtomatika concern will start mass production of new samples. The Ministry of Defense, the Federal Security Service, the Rosguard, the Ministry of the Interior and other security agencies are considered potential customers. In addition, industrial enterprises and civil society organizations that need protection from modern and prospective threats may be interested in EW complexes. Finally, the reported interest from foreign organizations.

There is every reason to believe that new domestic developments in the field of combating unmanned aerial vehicles will find a buyer and enter the service, perhaps even in different structures. This is facilitated by both their high performance and broad capabilities, as well as the development of the unmanned direction and the associated threats. Under existing conditions, specialized electronic warfare systems can become an effective means of protecting various objects, and even surpass traditional air defense systems in their characteristics. 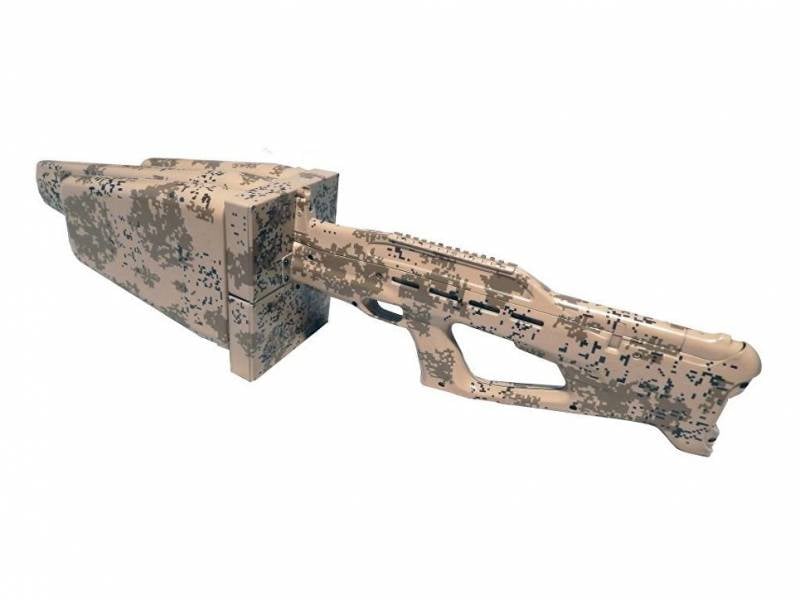 Progress in the field of UAVs has led to the emergence of a great many types of equipment for different purposes with different characteristics. At the same time, all of them are capable of solving military tasks - conduct reconnaissance or deliver a specific combat load to the target. The Syrian experience of recent years shows that even the simplest and cheapest drones can be used for reconnaissance or strikes. They have limited capabilities, but this minus is offset by the proper organization of the attack.

Air defense complexes using radar equipment, missiles and weapons, designed for full-fledged aviation, are far from always able to detect and hit a small-sized unmanned vehicle. Moreover, in many such cases, such an attack is unprofitable from an economic point of view. In certain situations, the cost of an anti-aircraft missile exceeds the price of a UAV and the possible damage from its low combat load.

In such situations, electronic warfare becomes a profitable and convenient alternative to the “traditional” air defense system. With all its advantages, drones have a number of weak points. First of all, they depend on radio communications. Radio channels exchange data with the operator’s console and receive commands. In addition, the radio is used for navigation. The suppression of these channels, at a minimum, complicates the further work of the UAV, and in some situations can lead to its death.

Distinguished by a certain complexity and high cost, specialized EW systems, designed to destroy unmanned aircraft, are quite cheap to operate. To hit a target, no rockets or shells are used, and the cost of electricity is incomparably less than the cost of ammunition. At the same time, such complexes use innate target vulnerabilities. The calculated and actual results of applying such a technique are obvious.

The armed forces and special services of a number of countries have already realized that to combat unmanned aerial vehicles of a number of classes, it is necessary to use not anti-aircraft weapons, but electronic warfare systems. In this regard, several states are currently engaged in the development of specialized complexes of this kind. Several similar samples have already been created in our country. Some of these products have been tested and are now being offered to potential customers. In the near future, the list of Russian products available for ordering will be replenished with multifunctional complexes “Sapsan”, “Taran” and “Pishchal” from the concern “Avtomatika”. Probably, in the future they will make a significant contribution to the protection of certain objects from unmanned threats.