Heavy machine guns. The crisis of the genre or a second wind? 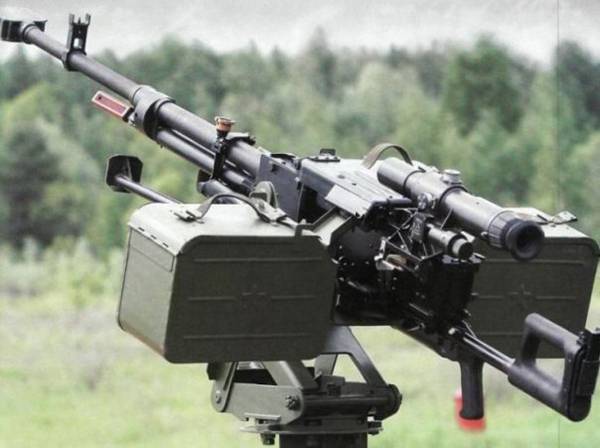 The experience of the military operations of the last decades, starting with the Afghan war, has shown the need to arm motorized rifle subunits with heavy machine guns already at the company level, and even better at the platoon level.

Today we are in about the same conditions as the Soviet Army in Afghanistan, no matter how strange it may sound. Accordingly, for a real increase in the firepower of the unit in modern conditions, real machine guns are needed, and not LMG class ratchets. 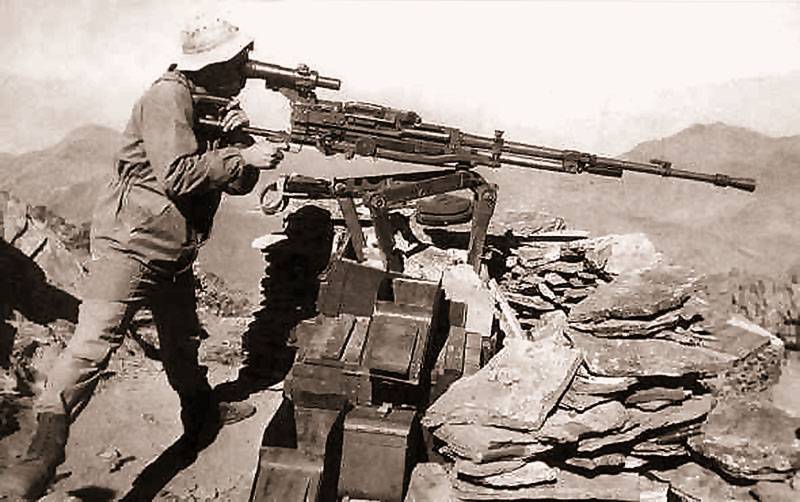 It is clear that such "wastefulness" does not please our guardians of the sovereign treasury. Machine gun - weapon expensive A modern machine gun especially. And large-caliber is generally ... Production itself is expensive. Expensive ammunition. Very expensive sights and other devices for high-quality aiming.

So what to do? Where to run? 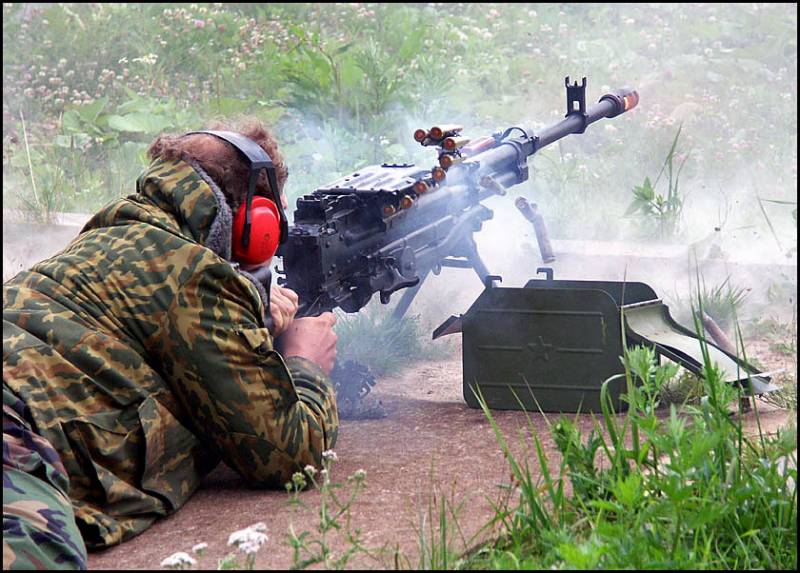 Officially, the reluctance to arm the company commander with heavy machine guns motivates not so much the cost as care for the soldier. The machine gun and machine are heavy enough. For the qualitative use of such weapons requires the calculation of a person's 3-4. And, accordingly, taking into account the armament of modern armies with automatic cannons, such a numerous calculation can be quickly destroyed. In the presence of guns.

Large seen in the distance. Therefore, we will try to return to 30-40 years ago. To Afghanistan. Today it is already possible to draw any conclusions on those events.

Those of the readers who got "behind the river" in the first years of the war, remember the machine-gun nests of the "spirits" on the mountain passes. A gang of 15-20 people, armed with Chinese DShKM, "kept" the company without any problems. Our large-caliber machine guns on the BTR were often simply useless. Machines could not reach positions suitable for accurate shooting. 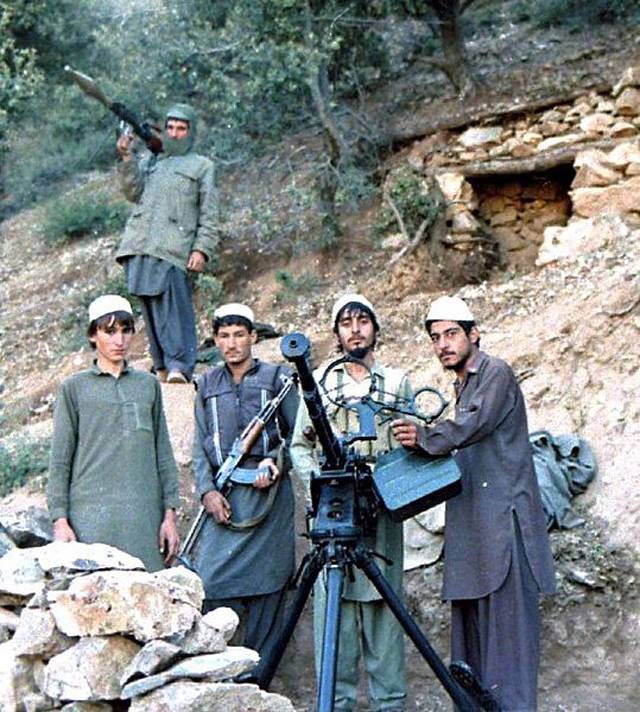 It was then that the ability of the airborne assault battalions to solve problems that the motorized rifle regiments could not solve. Why? Why did the spetsnaz group calmly "shoot" machine-gunners from the position? Did the DSB successfully solve the assigned combat mission?

The whole thing is not so much in a more thorough selection of fighters in these units, as in weapons. Remember the means of fire support from the infantry commander? BTR or BMP and ... AGS-17. A good 30-mm automatic grenade launcher, but in real combat is often the only weapon of fire support.

And what was at the disposal of the winged infantry battalion commander? Yes the same. But with the addition of 82-mm mortars. Therefore, the paratroop battalions were thrown to the rescue of motorized riflemen. Well-prepared calculations mortar "dumped" machine gun calculations dushman rather effectively. 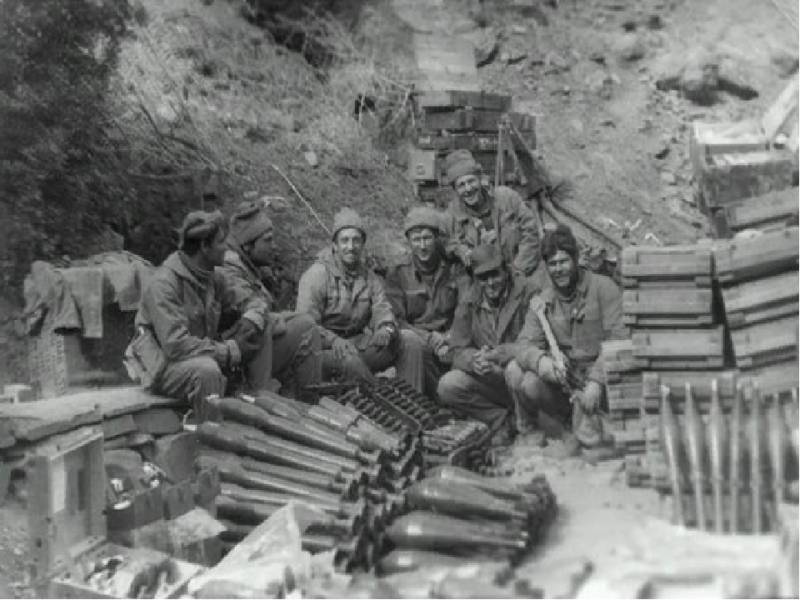 And from the ATP (rock machine-gun structure), from mountain pillboxes, from crevices, from thickets.

But the battalion commander DSHB was "king". In his battalion, in addition to all of the above, there was also a "Utes" in service. The same 12,7-mm heavy machine gun of Nikitin-Sokolov-Volkov (NSVS). It was “Cliff” that did an excellent job with Afghans' AJCF. First of all, due to the presence of the optical sight. 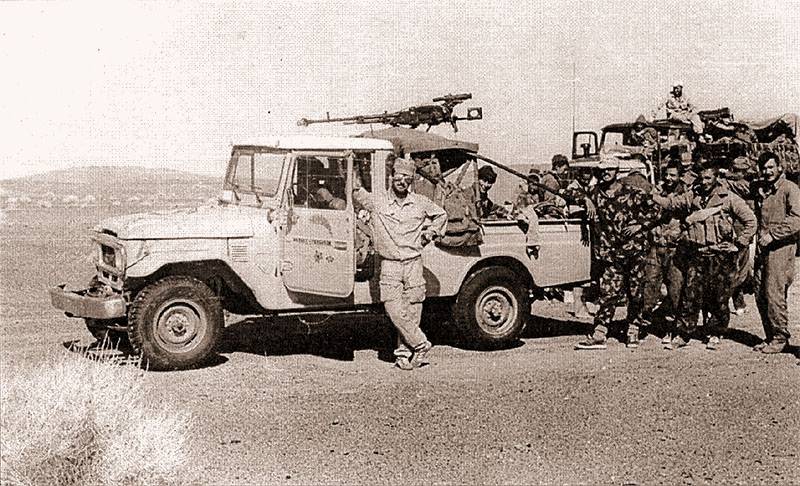 Although, frankly, it is still not clear to me why optics with a range of 500 meters relied on such a machine gun.

Those who "rolled over the bridge of friendship" later will not agree with the author. In the rifle divisions, too, were the "cliffs". There were, but I knowingly indicated the time frame of the war. And those "Cliffs" that appeared later, taking into account the experience of hostilities, like other heavy weapons, were often generally "out of state." And they were only in units and subunits of the 40 Army and Special Forces.

The work of calculating the NWS against the AUSM is perfectly illustrated by the example of the actions of a special forces group. The head patrol noticed a prepared ambush of spirits. The basis of the position, of course, was the machine-gun nest with DShKM.

Go to the forehead in such a situation, suicide. As an attempt to remove the calculation of the SVD or machines. The effectiveness of such shooting in the highlands is none. And the stream, of which there was darkness, in the heat plays the role of "madness for bullets."

That's when the “Cliff” calculation comes to the fore. A weak optical sight still gives a serious advantage to Soviet soldiers. The duel begins. Only in the cinema the defeat takes place with the very first shots. In fact, shooting is carried out with zero effect. But gradually both machine-gunners "find" the position of the enemy.

And here "plays" the advantage of the "Cliff". Two fighters can quickly change position. "Lost" for the enemy. Despite the decent weight of the NSV kit (42,7 kg), this is by no means a comparison with the NShKM. Such an operation with DShKM in the mountains is very problematic. Only the "body" of the machine gun weighs about 35 kg! And the launcher machine even more. 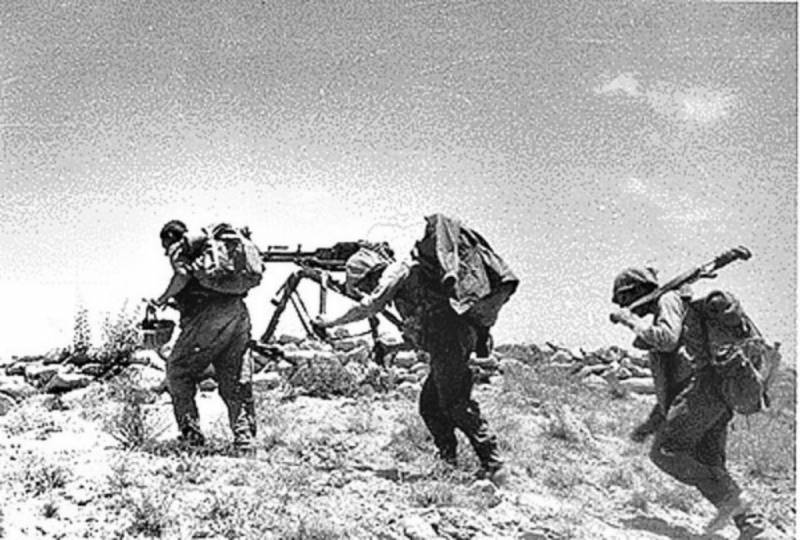 The Soviet DShK on a wheeled machine weighed under 150 kg. "Perfume" used the Chinese "Type 54", which the efforts of Chinese engineers became easier on 70 kg! And yet… 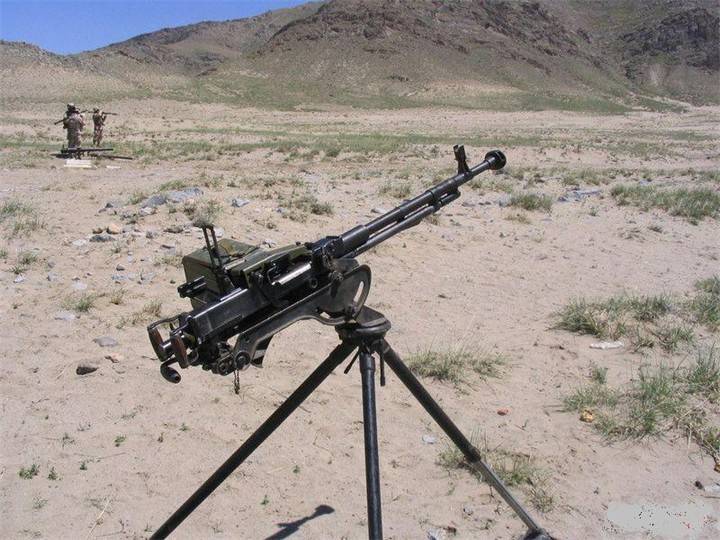 To leave the position machine gunners DSHK can not, at least quickly.

The usual alignment: while the duel of machine gunners lasted, the rest of the fighters of the group, using the "dead zones", were selected for an ambush and destroyed the Mujahideen. By the way, the “dead zones” of the AESC were not so many, but the highlands are highlands.

Some ATP (rocky machine-gun construction) had walls up to a meter in the base and a diameter of at least 2-2,5 meters. Artillery helped to pick out machine gunners from such an ATP, and aviation. And "Bumblebee", then still an exotic weapon, came in handy.

So, the effectiveness of "Cliff" was evaluated quickly. But there was one major limitation for his work. Ammunition. After all, a box and fifty cartridges for a machine gun weigh more than 11 kg.

And the trouble of all machine guns, powerful recoil, which knocks down the sight, in a large caliber is particularly pronounced. Because the calculations began to shoot "economically." Single or two rounds. Oddly enough, such shooting increased the effectiveness of weapons.

Large caliber is used in flat terrain. Now another one has been added to the enemy's fire point suppression functions. A decent large-caliber firing range has turned such a weapon into anti-sniper too. 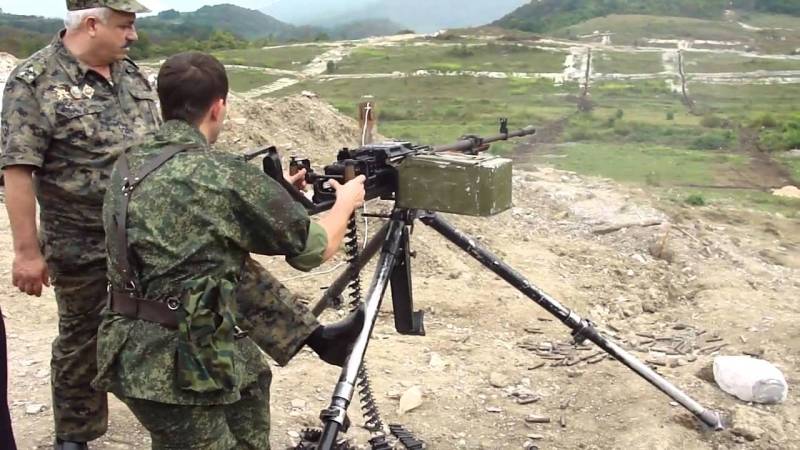 Mass sniper rifles, rarely have a long range. The sighting range of machine guns from 2000 to 3000 meters. Moreover, shelters do not save from such weapons. A sniper can rarely afford brick or concrete walls. In the field or forest, he uses shelters rather to disguise.

Returning to the need for the appearance of large-caliber machine guns in companies, it is necessary to name the advantages of this weapon over other means of fire support.

First of all, such machine guns "react to danger" much faster than all other means. Grenade launchers, mortars and other weapons do not have this quality. The reason is commonplace. The initial speed of the ammunition. The initial speed of a machine gun bullet is greater than 800 m / s. Thus, for example, destroying an enemy at a distance of 600 meters will take a 4-5 fighter’s seconds. Grenades and mines will "get to the target" from 12 to 18 seconds.

Long range shooting. A sighting range of several kilometers provides tremendous advantages for combating not only snipers, but also calculations of grenade launchers, mortars, anti-tank weapons and even artillery pieces advanced to the front.

A heavy machine gun can disable easily armored vehicles and vehicles at a decent distance. What is especially relevant today in connection with the use of light armored personnel carriers and the Humve in most armies in the world.

And finally, it is necessary to use the experience of the enemy. It is a machine gun of large caliber should be the basis of the defense unit. The BTR and the BMP do not have such a quick "reaction" to changing situations. Their job is to work on bunkers, armored targets and helicopters.

It so happened that the article describes more of the use of "Cliff". More perfect "Cord" on application does not differ. And in terms of overall mass and docking characteristics, the Kord is similar to the NSVS-12,7 machine gun. True, Kord is a record holder. The world's first heavy machine gun, which works on a bipod. And even with hands. 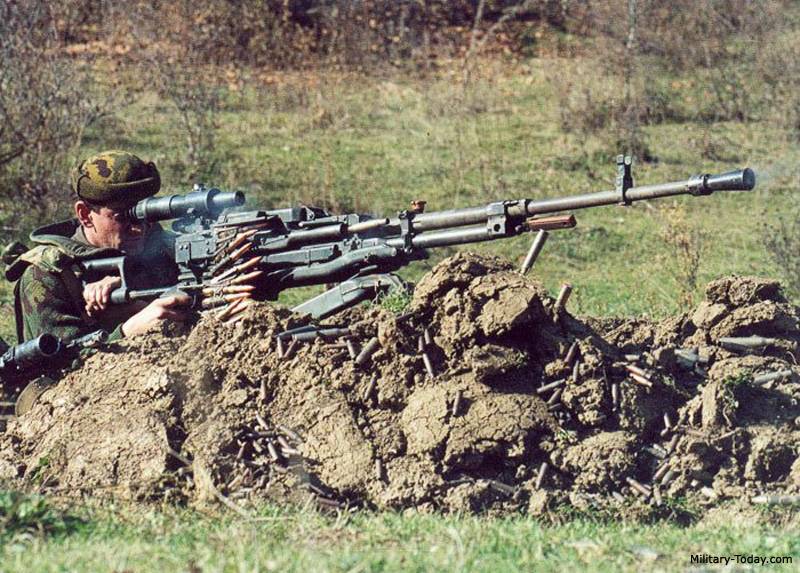 The imbalance in the direction of grenade launchers and light handheld under-guns, which arose during the Soviet era, must be urgently eliminated. Especially since our heavy machine guns are really good.