Battleship "Fuso": kill the enemy before the start of the battle 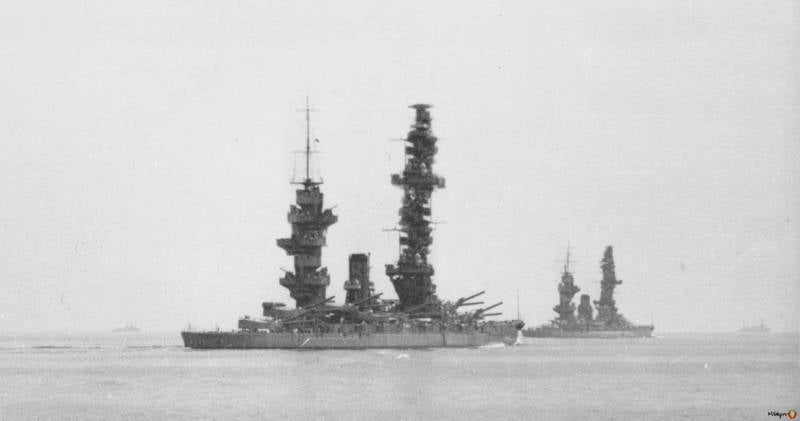 In the process of upgrading the battleship Fuso, the designers faced a shortage of space for installing modern means of observation, communication and fire control. Six towers of the main caliber, distributed throughout the length of the ship, prevented the placement of additional bridges, logging and rangefinder posts.

The only way out was the unstoppable upward movement. Already after the first modernization (1930-1933) the “Fuso” superstructure rose above the deck by 40 meters, becoming the highest in the world. Unusual type of add-in entered history under the name “pagoda”, thus emphasizing the national Japanese flavor.

A pile of tiers created a false sense of chaos. Nevertheless, the pagoda was a well-thought-out construction designed to solve purely practical problems. The Japanese solved the problem of lack of space on the upper deck, while simultaneously providing combat posts with an excellent overview.

The lowest tier was occupied by a secondary bridge for controlling medium-caliber artillery fire. Just above it was the bridge of the compasses. Even higher is an observation post with three powerful 18-cm binoculars and a signaling spotlight. The next level is a spare fire control post for artillery of the main caliber.

Above, the main post of the GK artillery fire control was located: a stabilized central sight with the calculation of six numbers, a Socuthekiban (for determining the course and speed of the target) and observation instruments.

Further upwards is the distance measuring bridge with the 10-meter rangefinder moving along the rails. From this tier access to signaling yards was opened.

The space above the distance bridge occupied the battle bridge with binoculars.

The last floor was a central observation post with a direction finder antenna. And at the very top of the "pagoda" - top fire.

In the spring of 1945, after the death of LC Yamato, the battleship Fuso became the flagship of the United fleet. The new appointment entailed further changes in the design of the battleship - its “pagoda” grew in height, allowing it to place additional transmitters and a flagship command post (FKP).

The planned modernization of the battleship was postponed due to lack of funds after the defeat of Japan in the war. The required amount (10 trillion yen) was collected only at the beginning of the 60-s, and, in the dank autumn of 1962, “Fuso” was moored to the maritime station Kure. 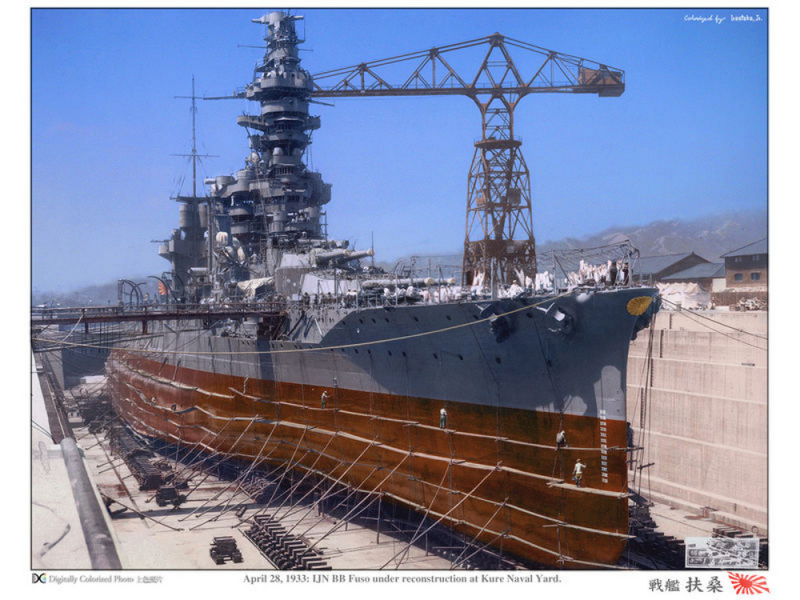 The need for urgent modernization was caused by the development of controlled weapons. The main direction of modernization was to increase the height of the “pagoda” simultaneously with forcing the power plant of the battleship three times (to 240 thous. Hp), which, according to calculations, was to provide an increase in speed in the 4 node.

At an altitude of 100 meters above sea level, there are bridges of space communications on VHF frequencies, general detection radars and stabilized radar posts for target illumination. One of the main elements in the construction of the “pagoda” was the additional (seventh) tower of the main caliber, located in the middle part of the superstructure, between the bridges of electronic reconnaissance and signal stroboscopes. 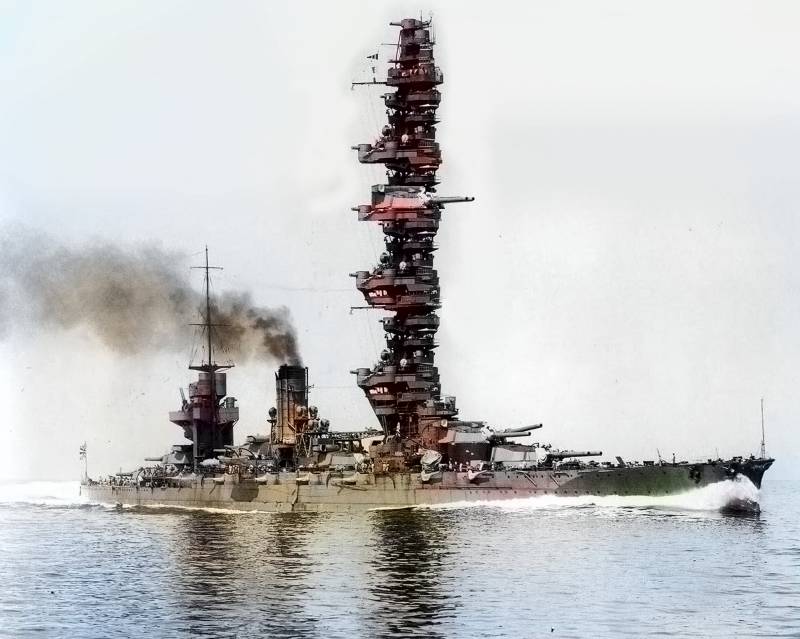 Looking at the majestic pagoda “Fuso”, the great thinker and poet Tomimo Tokoso composed his poem “The seven-tower castle”:

Die for the great Nippon -
I leave my wife only debts
Yes, three tamagotchi, small-small less ...

The battleship's 80 jubilee, celebrated in a ceremonial setting in 1995, coincided with a new extensive Fuso modernization program. By the end of 90's the height of its superstructure reached 400 meters, thanks to which the battleship completely switched to renewable energy sources. Bridges of wind generators and solar batteries occupy the entire upper part of the Fuso add-on.

At present, experiments are being carried out on board to create weapons on new physical principles. The system of self-defense, which leads enemy missiles into space with a different metric, and an accelerator of superluminal particles (tachyons) that break causal relationships and kill the enemy before the start of the battle. 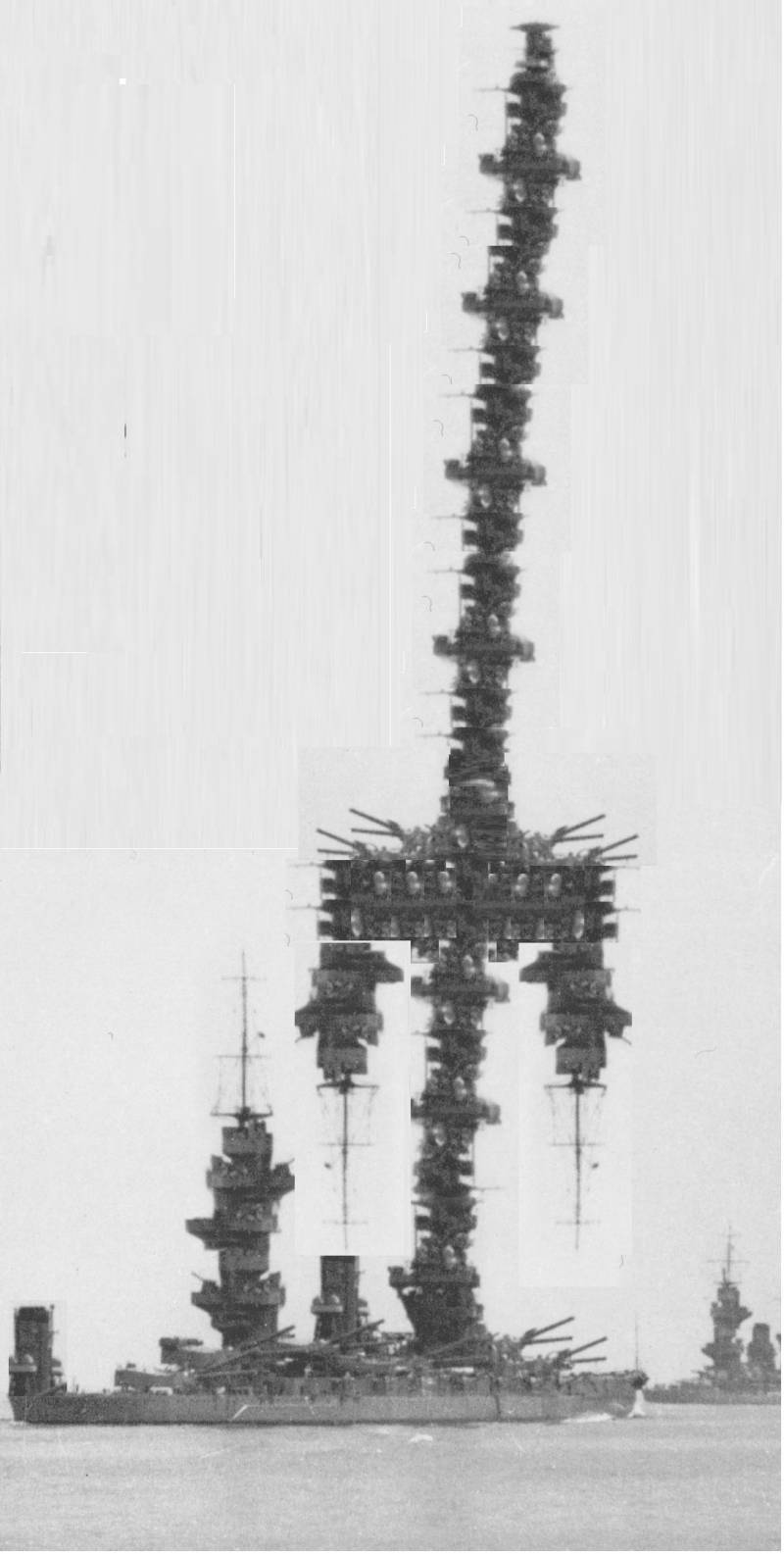 Ctrl Enter
Noticed oshЫbku Highlight text and press. Ctrl + Enter
We are
Automatic guns for armored combat vehicles. Point of view of a Western specialistLead and cotton. About the confrontation of electronics and armor
Military Reviewin Yandex News
Military Reviewin Google News
79 comments
Information
Dear reader, to leave comments on the publication, you must sign in.