Swedish "Griffin" of the fifth generation 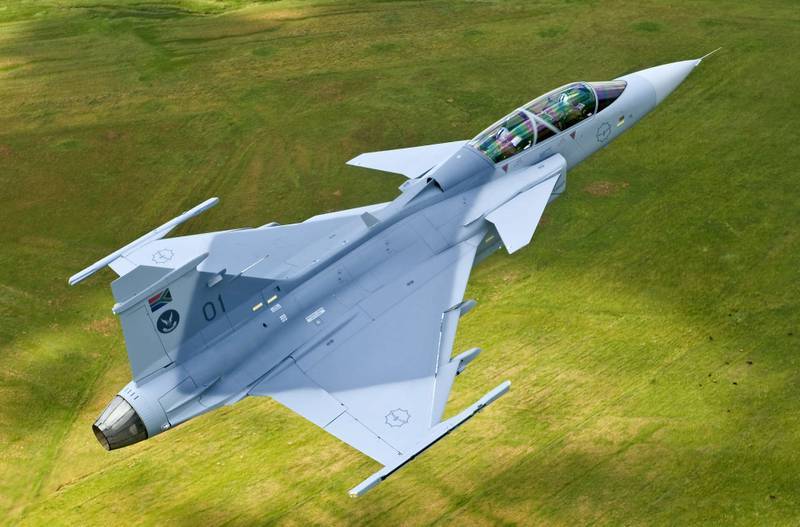 The main weapon “Gripena” - the adequacy of its creators. The art of cutting off obviously impossible requirements, focusing on real-world tasks and opportunities.


According to the generally accepted theory, for the 4th generation fighter aviation should follow the “fifth” with a prescribed set of certain qualities. Stealth. Cruising supersonic. Avionics of a new sample. While maintaining the high agility inherent in generation 4.

The only possible layout for such an aircraft was the layout of the “Raptor” with a trapezoidal wing and two-quilted V-shaped tail. All the rest is the interpretation of this scheme. One solution that gives two correct answers:

c) meeting the requirements of the “stealth” technology due to the parallelism of the edges of the trapezoidal wing and the reduction of the EPR in the lateral projection due to the collapse of the keels;

b) maintaining high maneuverability due to four-vortex aerodynamics. Primary eddies, formed by the influx of the wing, interact with the V-shaped keels, which allows you to maintain control at any angle of attack. 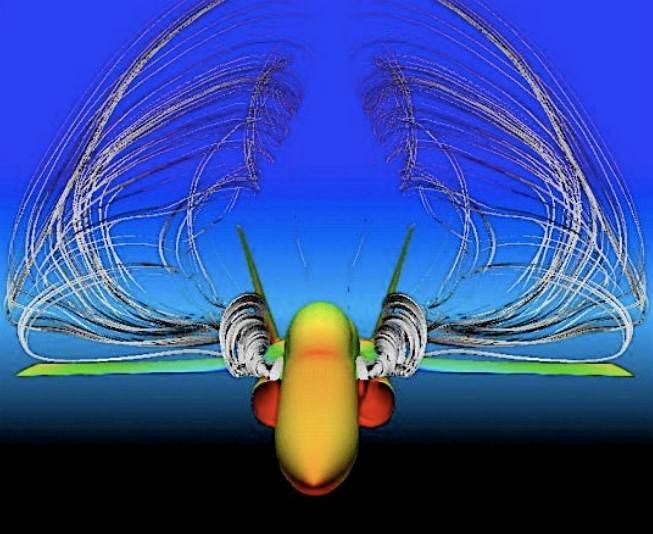 For the first time, this idea, taken as the basis for creating the 5 generation, was implemented on the F / A-18 “Hornet” fighter.

This is what a fifth generation fighter should look like. But the designers of the company SAAB have their own opinions on this issue. According to the Swedes, the established set of characteristics for the “fifth generation”, as well as its technical features, are just ways to achieve the goal. What is the main task of the modern fighter? Survive over the battlefield!

Hiding in the hope of being left unnoticed by the enemy, according to the Swedes, is not the most effective option. When creating the Gripen E fighter, the integrated parameter “survivability” was put in the cornerstone, combining the situational awareness of the pilot with the ability to counter various threats.

The first to detect danger. Bypass the ambush. In time to apply fire traps. Confuse the enemy. “Suppress” active noise homing missiles. Ideally, use weapons from the maximum distance, without the need to approach the target.

The bold theory is based on the novelties of the European military industry. The Swedish Air Force was the first to adopt the MBDA Meteor long-range air defense missile system. Thanks to the use of the Meteor sustained ramjet, the 3 — 6 is times more energetic than other air-to-air missiles. At the same time, unlike the French “Rafale”, the Swedish “Gripenes” use a more advanced modification of Meteor with a two-way data exchange channel.

Melee weapons - IRIS-T. The high sensitivity of the GOS and the ability to perform maneuvers with 60-multiple overload allows you to intercept small-sized targets, including issued by the enemy Zour and POW.

The new version of “Gripen E” (or “Gripen NG”), according to the developers, provides situational awareness at the level of 5 generation fighters through the use of key components:

- ES-05 RAVAN radar with AFAR, providing the pilot with a larger viewing angle;
- Skyward-G all-view electro-optical detection system operating in the thermal range. European analogue of the AN / AAQ-37 system installed on F-35 fighter jets;
- a network-centric data exchange system that allows the Gripenov pilots to monitor the status of other aircraft of their combat group (weapon status, amount of fuel, warning about detected threats, target distribution in combat).

And also:
- all-view warning system for radiation exposure and active jamming (EW);
- increased fuel supply by 40%;
- 10 points for the suspension of weapons and suspension containers with reconnaissance and sighting equipment.

All this allows “Gripenam E” to fully justify its designation JAS (fighter-attack reconnaissance).

According to the Swedes, the “gripenes” of the new modification are capable of creating much greater problems for the enemy than the fourth-generation multi-purpose fighters. So, they - a new round in the evolution of fighter aircraft. 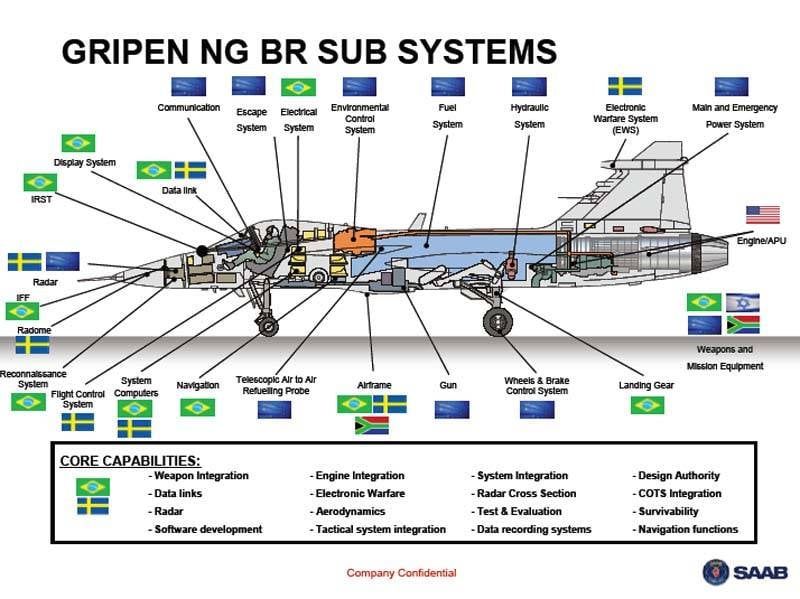 The concept of "survival" is the first.

Second, a combat aircraft must regularly fly into the sky, allowing pilots to hone their skills and skills. Here, JAS-39E continues the traditions of the Gripen family, which have received the reputation of the simplest and cheapest in operation among fourth-generation fighter jets.

According to the Janes 2012 Yearbook, the cost of one hour of JAS-39C flight was 4700 dollars, twice as low as that of the closest competitor, the single-engine F-16.

Among other records of the small “Gripen”: over thirty years of operation, he has ditched one person. Swedish fighter has the lowest level of accidents among peers.

Now let's talk about its shortcomings.

The Swedes could not create their own engine.

Despite the similar designation, F414 is considered a new development based on the YF-120 engine, created for the fifth-generation fighter YF-23 (the rival YF-22 Raptor). 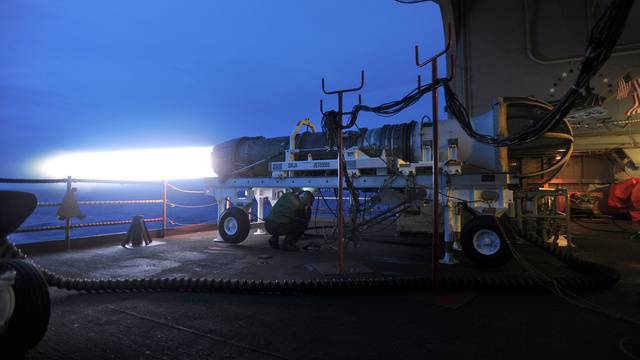 Compared to its predecessor (F404), the degree of pressure increase in the F414 compressor has been increased from 25 to 30, engine thrust has increased by 30%. In general, specialists respect the F404 / F414 family, emphasizing their rather high characteristics and constructive perfection. The latter develops a thrusting mode of around 6 tons in afterburner mode (at the afterburner - all 10), with an engine mass of around 1 tons. A quarter of a century ago nobody had such indicators. And by the ratio of the specific thrust to the air flow, it is still the absolute world record holder (air consumption at the forcing of 77 kg / s).

Obviously, the Swedes do not see problems in the use of American power plants. Sanctions and embargo do not threaten them. The rest is the best of the engines on the world market for combat aircraft.

In my opinion, the only real problem is the low gripping capacity of the Gripen. In the single-engine layout itself, there is no problem if there is a sufficiently powerful and high-torque engine.

Unfortunately for the Swedes, F404 / F414 is not enough to work alone. It is no coincidence that the multi-purpose deck “Hornet” / “SuperHornet”, considered to be light-class fighters, have a twin-engine layout.

In the fighter-interceptor version, with a combat mass of 9-10 tons (corresponding to 40% fuel balance and 4-6 URVV), Swedish Gripen has a thrust-to-weight ratio less than 0,9. Even the small mass of the aircraft itself does not save (it is three tons lighter than the F-16), since the single-engine “Falcon” is equipped with engines of a different order (its F100 gives 13 tons at the afterburner with 1,7 tons of dry weight).

The new generation Gripen E is in a better position, however, the F414 thrust increased by one-third is leveled by the increased mass of the fighter itself (the maximum take-off is 16 tons).

The Swedes themselves arrogantly notice that the flight qualities are undoubtedly important, but they are not a priority in aerial combat and in overcoming the lines of modern air defense.

The story of the fighter "Gripen" is devoted to a recent debriefing, where an analysis of the confrontation of JAS-39E and Su-57 was carried out.

In an attempt to find out whether the Gripen E meets the requirements of the fifth generation, many controversial statements were made, and the Swedish fighter itself was as a result attributed to the Yak-130 level. That in itself is absurd: a combat fighter has three times more thrust-to-weight ratio than TCB.

I hope this article will be able to clarify some points and understand the concept of “Gripen”. JAS-39C and perspective JAS-39E are not primitive small toys, but serious combat vehicles, with their own advantages and disadvantages. If someone else is interested in the question of whether “Gripen E” is a competitor to our Su-57, then the answer depends on the conditions of the problem. For those who want to buy the “top” fighters of the fifth generation, for example, Su-57 or F-35, the Swedish “Gripen E” is of no interest. As for the meeting of fighters in battle, everything is much easier. Someone says that “Gripen” will win; someone, on the contrary, that he will be immediately shot down. But, honestly speaking, nobody knows. One thing is clear: “Gripen E” is not so weak as to not take it seriously. 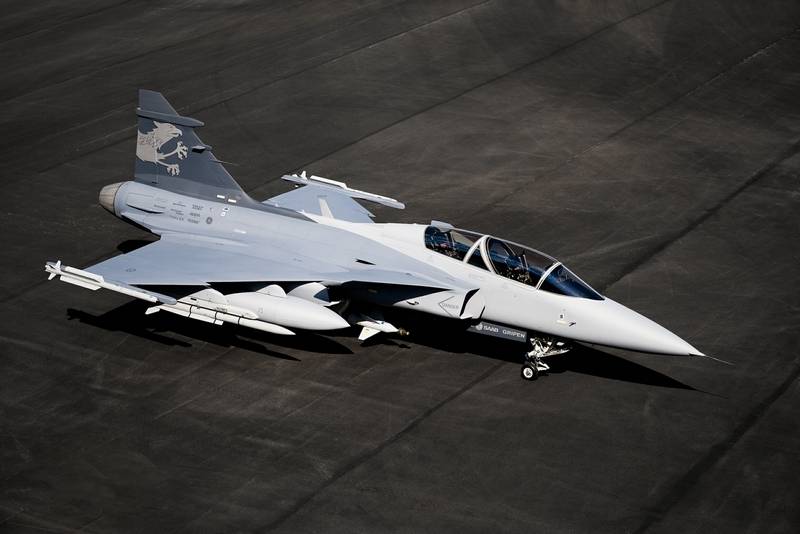 Ctrl Enter
Noticed oshЫbku Highlight text and press. Ctrl + Enter
We are
Foreign press: PAK FA is not the fifth generation fighterWhat does F-35 not like in Australia?
Military Reviewin Yandex News
Military Reviewin Google News
184 comments
Information
Dear reader, to leave comments on the publication, you must sign in.