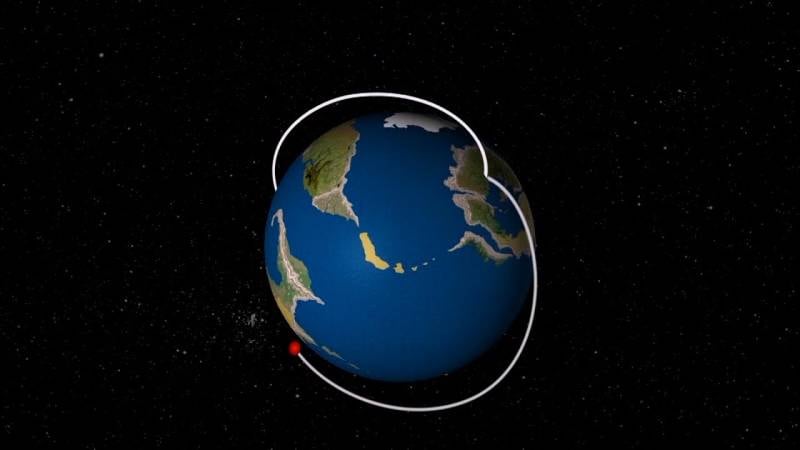 The first stage is denial.

The German expert in the field of rocket technology, Robert Schmucker, considered the statements of V. Putin to be absolutely implausible. "I can not imagine that the Russians can create a small flying reactor," said the expert in an interview with Deutsche Welle.

The first domestic satellite with a nuclear power plant (“Cosmos-367”) was launched from Baikonur in the distant 1970 year. The 37 fuel assemblies of the BES-5 Buk compact reactor containing 30 kg of uranium at the temperature in the primary circuit 700 ° С and the heat generation 100 kW provided the electrical power of the 3 kW unit. The mass of the reactor is less than one ton, the estimated operating time of the 120-130 day.

Experts will express doubt: the power of this nuclear “battery” is too low ... But! You look at the date: it was half a century ago.

Low efficiency - a consequence of thermionic conversion. In other forms of energy transfer, the indicators are much higher, for example, in NPPs, the efficiency value is within 32-38%. In this sense, the thermal power of the “cosmic” reactor is of particular interest. 100 kW - a serious bid to win.

It should be noted that BES-5 “Buk” does not belong to the RTG family. Radioisotope thermoelectric generators convert the energy of the natural decay of atoms of radioactive elements and have negligible power. At the same time, Buk is a real chain-driven reactor.

The next generation of Soviet small-sized reactors, which appeared at the end of the 1980-s, was distinguished by even smaller dimensions and greater energy release. This was the unique “Topaz”: compared with “Buk”, the amount of uranium in the reactor was reduced three times (to 11,5 kg). Thermal power increased by 50% and amounted to 150 kW, the time of continuous operation reached 11 months (a reactor of this type was installed onboard the Kosmos-1867 reconnaissance satellite). 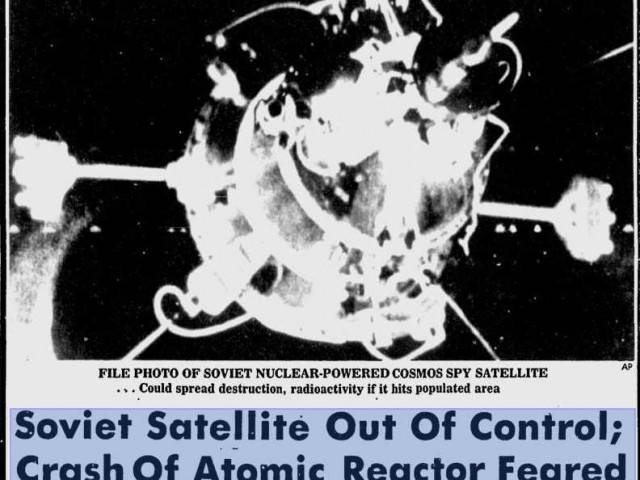 Nuclear space reactors are an extraterrestrial form of death. With the loss of control, the “shooting star” didn’t fulfill desires, but could let the “lucky ones” off their sins.

In 1992, the two remaining copies of the Topaz series small-sized reactors were sold in the US for $ 13 million.

The main question is: is there enough power for such installations to use them as rocket engines? By passing the working fluid (air) through the hot core of the reactor and receiving the output of thrust according to the law of conservation of momentum.

What power should a nuclear power unit have to be used as a cruise missile cruise engine, similar in size to X-101?

In this case, the required power of the cruise missile engine is only 25 times the thermal capacity of the Topaz reactor.

Despite the doubts of the German expert, the creation of a nuclear turbojet (or direct-flow) rocket engine is a realistic task that meets the requirements of modernity.

“All of this is a surprise - a nuclear-powered cruise missile,” said Douglas Barry, senior researcher at the International Institute for Strategic Studies in London. “This idea is not new, it was talked about in 60's, but it faced a lot of obstacles.”

This is not only talked about. On tests in 1964, the Tori-IIC ramjet engine developed 16 tons of thrust with the thermal power of the 513 MW reactor. Simulating a supersonic flight, the installation consumed 450 tons of compressed air in five minutes. The reactor was designed very “hot” - the operating temperature in the core reached 1600 ° С. The design had very narrow tolerances: in a number of areas the permissible temperature was only 150-200 ° С below the temperature at which the elements of the rocket melted and collapsed.

Were there enough of these indicators for the use of the LVRS as an engine in practice? The answer is obvious. 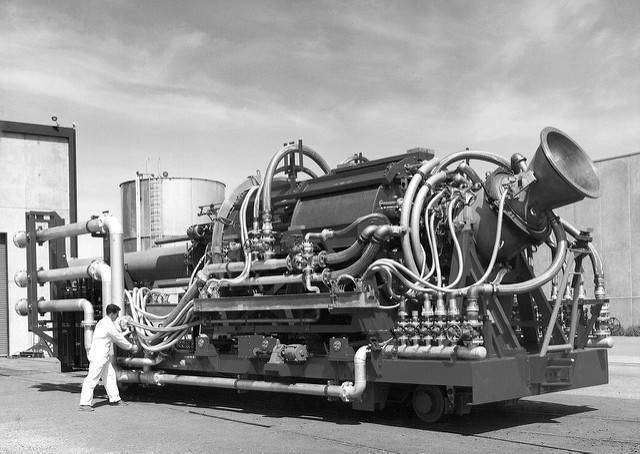 The experimental installations “Tori-IIA” and “-IIC” are the prototypes of the nuclear engine of the SLAM cruise missile.

Devilish invention capable, according to calculations, to pierce 160 000 km of space at a minimum height with a speed of 3M. Literally “mowing down” everyone who met on her mournful way, with a shock wave and a thunderous rumble in 162 dB (deadly meaning for a person).

Reactor combat LA had no biological protection. The eardrums broken after the SLAM fly-over would seem to be an insignificant circumstance against the background of radioactive emissions from the rocket nozzle. The flying monster left behind a train more than a kilometer wide with a dose of 200-300 rad. According to calculations, in one hour of flight, SLAM infected 1800 square miles with lethal radiation.

According to calculations, the length of the aircraft could reach 26 meters. Starting weight - 27 tons. Combat load - thermonuclear charges, which were required to be consistently dropped on several Soviet cities, along the missile flight route. After the completion of the main task, SLAM had to circle the USSR for several more days, infecting everything around with radioactive emissions.

Perhaps the most deadly weapon of all that people tried to create. Fortunately, things did not go as far as real launches.

The project, codenamed “Pluto,” was collapsed on July 1 of the year 1964. At the same time, according to one of the SLAM developers, J. Craven, none of the US military and political leadership regretted the decision.

The reason for the rejection of the "low-flying nuclear missile" was the development of intercontinental ballistic missiles. Capable of inflicting the necessary damage in less time with incomparable risks for the military themselves. As the authors of the publication in the Air & Space magazine rightly noted: ICBMs, at least, did not kill everyone who was near the launcher.

It is still unknown who, where and how he planned to carry out tests of the fiend. And who would answer if SLAM lost its course and flew over Los Angeles. One of the insane offers offered to tie a rocket to the cable and drive in a circle over the deserted areas. Nevada. However, another question immediately arose: what to do with the rocket when the last remnants of fuel are burned out in the reactor? The place where the SLAM “lands” will not be possible to approach for centuries.

Unlike the mystical “Pluto,” originally from the 1950s, the project of a modern nuclear missile, voiced by V. Putin, proposes the creation of an effective means for breaking through the American ABM system. A means of guaranteed mutual destruction is the most important criterion for nuclear deterrence.

The transformation of the classic “nuclear triad” into a devilish “pentagram” - with the inclusion of new generation delivery vehicles (nuclear cruise missiles of unlimited range and strategic “6” status nuclear torpedoes), coupled with the modernization of ICBM warheads (maneuvering “Avant-garde”) is reasonable response to the emergence of new threats. Washington’s policy on missile defense leaves Moscow no other choice.

“You are developing your anti-missile systems. The range of anti-missiles increases, the accuracy increases, this weapon is improved. Therefore, we need to adequately respond to this so that we can overcome the system not only today, but also tomorrow, when you will have a new weapon. ”
V. Putin in an interview with NBC.

The declassified details of the experiments on the SLAM / Pluto program convincingly prove that the creation of a nuclear cruise missile was possible (technically feasible) six decades ago. Modern technology allows you to bring the idea to a new technical level.

Despite a lot of obvious facts explaining the reasons for the emergence of a “super-weapon of the president” and dispelling any doubts about the “impossibility” of creating such systems, in Russia, as well as abroad, many skeptics remain. "All of these weapons - only a means of information warfare." And next - a variety of proposals.

Probably, you should not take seriously caricature "experts", such as I. Moiseyev. The head of the Space Policy Institute (?), Who told The Insider online publication: “You can't put a nuclear engine on a cruise missile. Yes and no such engines. ”

Attempts to “expose” the statements of the president are being made at a more serious analytical level. Such “investigations” immediately gain popularity among the liberal-minded public. Skeptics make the following arguments.

All sounded complexes belong to the strategic top-secret weapons, to check or deny the existence of which is not possible. (In the message itself, the Federal Assembly demonstrated computer graphics and footage of launches indistinguishable from testing other types of cruise missiles.) At the same time, no one talks, for example, about creating a heavy assault drone or a destroyer-class combat ship. Weapons, which soon would have to demonstrate the entire world.

According to some “whistleblowers”, the purely strategic, “secret” context of messages may indicate their implausible nature. Well, if this is the main argument, then what is the dispute with these people about?

There is another point of view. Shocking news about nuclear missiles and unmanned 100 hub submarines are being made against the background of the obvious problems of the military-industrial complex encountered in the implementation of simpler projects of “traditional” weapons. Statements about missiles that once surpassed all existing types of weapons have a sharp contrast against the background of the well-known situation with rocket production. Skeptics cite as an example the massive failures during the launch of the Bulava or the creation of the Angara LV, which lasted for two decades. Herself история started in 1995 year; Speaking in November 2017, Deputy Prime Minister D. Rogozin promised to resume the launch of the Angara from the Vostochny cosmodrome only in ... 2021

And, by the way, why was “Zircon” ignored - the main naval sensation of the previous year? Hypersonic rocket that can cross out all existing concepts of sea battle. 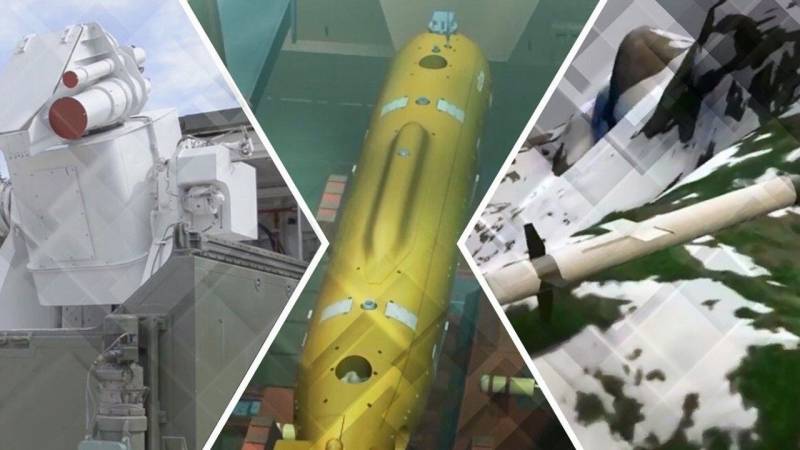 The news of the entry into the troops of laser systems attracted the attention of manufacturers of laser systems. Existing models of directed energy weapons were created on an extensive base of research and development of high-tech equipment for the civilian market. For example, the American ship installation AN / SEQ-3 LaWS is a “pack” of six welding lasers with a total power of 33 kW.

The statement about the creation of a super-power combat laser is contrasted against the background of a very weak laser industry: Russia is not among the world's largest manufacturers of laser equipment (Coherent, IPG Photonics or Chinese Han 'Laser Technology). Therefore, the sudden appearance of samples of high-power laser weapons causes genuine interest among specialists.

There are always more questions than answers. The devil is in the details, but official sources give a very poor understanding of the latest weapons. Often, it is even unclear whether the system is ready for adoption, or its development is at a certain stage. Known precedents associated with the creation of such weapons in the past, indicate that the problems arising from this are not solved by the click of a finger. Fans of technical innovations are concerned with the choice of location for testing the nuclear engine with CD. Or methods of communication with the status-6 submarine drone (the fundamental problem: radio communication does not work under water, during the communication sessions the submarines are forced to rise to the surface). It would be interesting to hear an explanation of how to use it: Compared to traditional ICBMs and SLBMs capable of starting and ending a war within an hour, the Status-6 will take several days to reach the US coast. When there will be no one!

The last battle is over.
Has anyone stayed alive?
In response, only the wind howl ...

Ctrl Enter
Noticed oshЫbku Highlight text and press. Ctrl + Enter
We are
The nuclear industry of Russia is waiting for “Breakthrough”Another satellite crashed without reaching the specified orbit
Military Reviewin Yandex News
Military Reviewin Google News
220 comments
Information
Dear reader, to leave comments on the publication, you must sign in.