March 1 2018
21
As part of the 3-th international exhibition and conference of unmanned systems and simulators UMEX-2018 (Unmanned Systems Exhibition and Conference), which was held in Abu Dhabi (UAE) from 25 to 27 February 2018, Ukraine presented its new attack unmanned aerial vehicle. In fact, we are talking about locking ammunition, or a kamikaze drone with an installed warhead intended for strikes against ground targets. Experts fear that the new military drones Ukrainian military can be used in the fighting in the Donbas.


UMEX is an annual exhibition and conference dedicated to modern unmanned systems. It has been held in the UAE since 2015. According to the organizers of the exhibition, about 2018 companies representing 100 countries took part in it in 20. New Ukrainian unmanned vehicles at the exhibition were demonstrated by the state foreign trade enterprise “Spetstechnoexport”, whose main activity is export-import relations in the global arms market.

According to the press service of the company Spetsnoeksport, on Monday, February 26, potential UAV customers, visited by the Ukrainian pavilion at the UMEX-2018, were shown the UAVs developed and manufactured by the state and private defense enterprises, among which tactical radius air reconnaissance systems were marked , a kamikaze drone with an installed warhead (patrolling ammunition), as well as means to counter UAVs.

All of the Ukrainian-made reconnaissance UAVs presented at the exhibition had experience of operating in combat conditions in the Donbass region, where, according to assurances from the Ukrainian side, they demonstrated high aerodynamic qualities and resistance to enemy electronic countermeasure systems. According to the report of Spetstekhnoexport, at the international exhibition UMEX, for the first time in 2018, two Ukrainian developments in the field of unmanned aerial vehicles were demonstrated to the public at once - this is a PD-1AF vertical take-off UAV, created by UkrspetsSystems, and a UAV-model UAV UAV, created by engineers of the Defense Electronic Technologies company. The last UAV can be safely attributed to the locking ammunition, which is jokingly called the “artilleryman’s dream”. 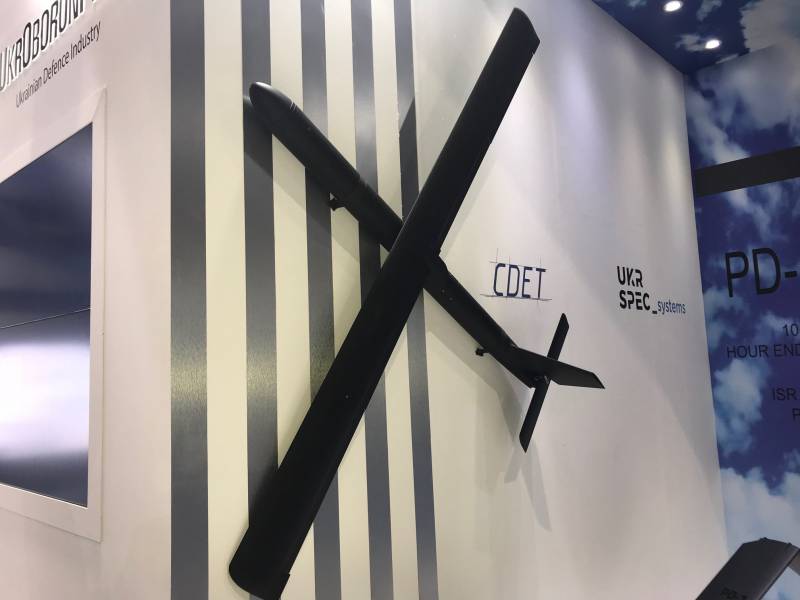 RAM UAV at UMEX 2018
The British Department of Defense is currently the most clearly classifies anti-burglary ammunition (BB) as cheap, guided, high-precision munitions, which for some time may be in the air, while in the waiting area and quickly attacking land and sea targets that are out of line of sight. BBs are under the control of an operator who visually tracks the environment and images of targets in real time, which gives him the ability to control the height, direction and exact time of attack of a fixed, moving or moving target, and also contributes to the formal identification and confirmation processes of target destruction ".

It can be noted that today, in barrage ammunition, shock and reconnaissance capabilities are interconnected. BBs are distinguished by their ability to locate and identify threats and / or provide important intelligence information, and also have a highly accurate impact on various types of ground targets in cases where there is a shortage of percussion and tactical reconnaissance vehicles.

Modern barracking ammunition can be used in difficult situations, including built-up areas (urban development), remote areas and melee scenarios, when there is a high risk of defeating your own troops and causing collateral damage, and the use of traditional artillery and rocket attacks is unacceptable or inaccessible, including because of its combat load and trajectory. BB can also be deployed in accordance with the complex rules of engagement, in which a small high-precision impact on the detected targets will be more effective than firing using traditional artillery systems, expensive air-to-surface missiles or free-falling bombs.

Presented at the exhibition in Abu Dhabi, the Ukrainian UAB RAM UAV uses the traditional concept for such systems. Such a drone performs reconnaissance flight, and after detecting and identifying the target, the operator of the complex can decide on its attack using the warhead integrated into the UAV design. According to representatives of the developer, the widespread use of composite materials in the design of a kamikaze drone makes it inconspicuous for enemy air defense systems. The presence of an electric motor with low acoustic visibility makes it possible to use this device as covertly as possible, even while being a short distance from possible targets.

UAV RAM UAV flight can be fully automated using the control system. The presence of the user control terminal allows you to plan the flight of the UAV, get a picture from the onboard video surveillance systems in the online mode, as well as give the command to attack the detected targets. The strike function of an unmanned aerial vehicle is realized by installing a warhead weighing up to 3 kg on it.

The dimensions of the device are quite compact - the wingspan is 2,3 meters, length is 1,8 meters. The maximum take-off weight of the UAV is 8 kg. Takeoff of the patrol ammunition RAM UAV is made using a special catapult. According to published official data, the maximum range of such a drone does not exceed 30 kilometers, and the duration of the flight - 40 minutes.

As noted in an interview with RIA correspondents News Denis Fedutinov is a Russian expert in the field of unmanned systems; today in the world there is a clear tendency towards the development of light ammunition locking ammunition. Initially, the idea of ​​developing such unmanned aerial vehicles belonged to engineers from Israel and the United States, but nowadays it is evaluated and picked up by developers from various states. “The main advantage of this kind of UAVs is that they are technical solutions that have a very good balance of cost and efficiency when performing detection and subsequent operational destruction of small targets and objects on the ground,” said Denis Fedutinov.

In general, it can be noted that the Ukrainian UAV kamikaze RAM UAV, created by the specialists of the company "Defensive Electronic Technologies", is somewhat reminiscent of the drones of terrorists who tried to attack the Russian aviation Hmeimim base in Syria in January 2018. They are based on an unmanned aerial vehicle with a warhead integrated in its design. The main difference is that the Ukrainian UAV is able to find and attack targets, while the drones of Syrian terrorists were aimed at the target using GPS or mobile phone signals. At the same time, RAM UAV ammunition is able to solve the same range of problems - sabotage, destruction of enemy manpower and equipment, including aircraft and helicopters in the parking lot, artillery crews and other ground targets.

The company “Spetstechnoexport” has not yet reported plans to send RAM UAV vehicles to the combat zone. At the same time, experts are confident that the question of sending the locking ammunition to the Donbass is only a matter of time. The drone is currently undergoing tests, as is the modern reconnaissance UAV Gorlitsa, which has a range of up to a thousand kilometers. Earlier, Oleksandr Turchynov, who holds the post of secretary of the National Security and Defense Council of Ukraine, said that the first flight tests of the Gorlitz UAV had already been carried out. Turchinov noted that the Gorlitsa UAV, which is manufactured by the state-owned enterprise Antonov, will be able not only to conduct air reconnaissance and ensure the correction and guidance of artillery fire, but also to carry out strike functions, being the carrier of two air-to-surface guided missiles.