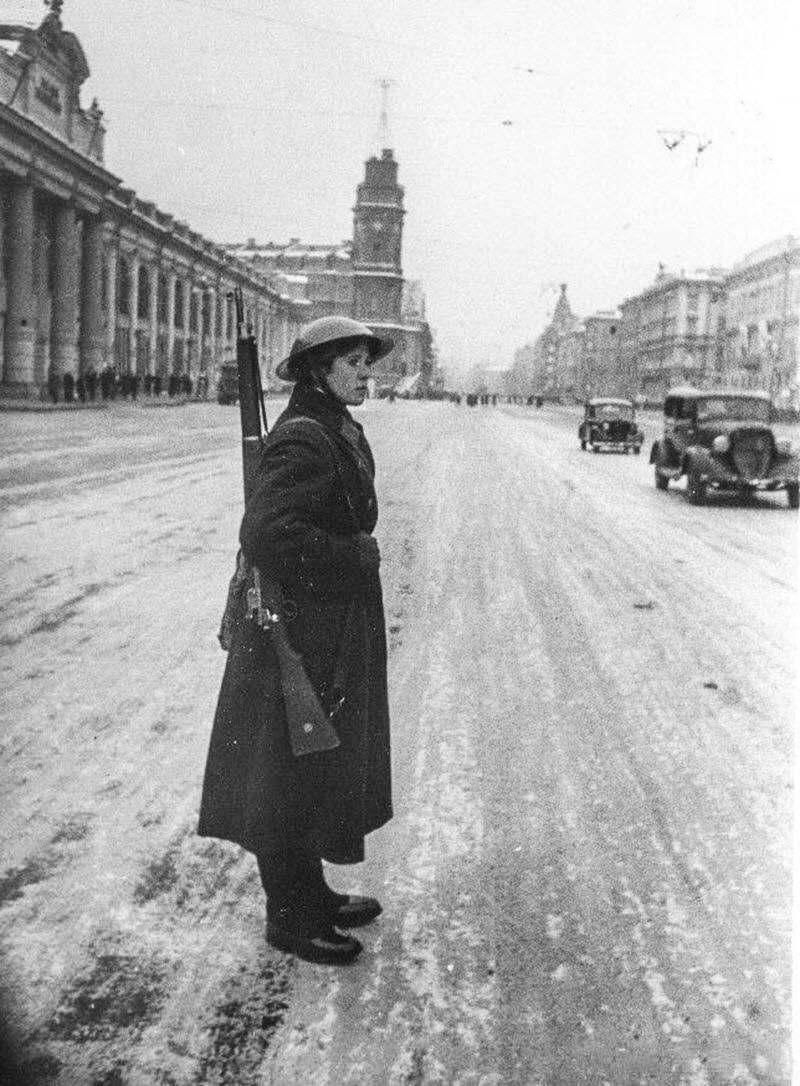 I was preparing a great review on steel helmets / helmets, and then a man called after watching the movie “Frontier” with a question.

The question was about a few seemingly documentary shots from the film in which the air defense fighters were in "some kind of strange helmet-like helmets." And, accordingly, the interlocutor was interested in what it is: foolishness, or? .. 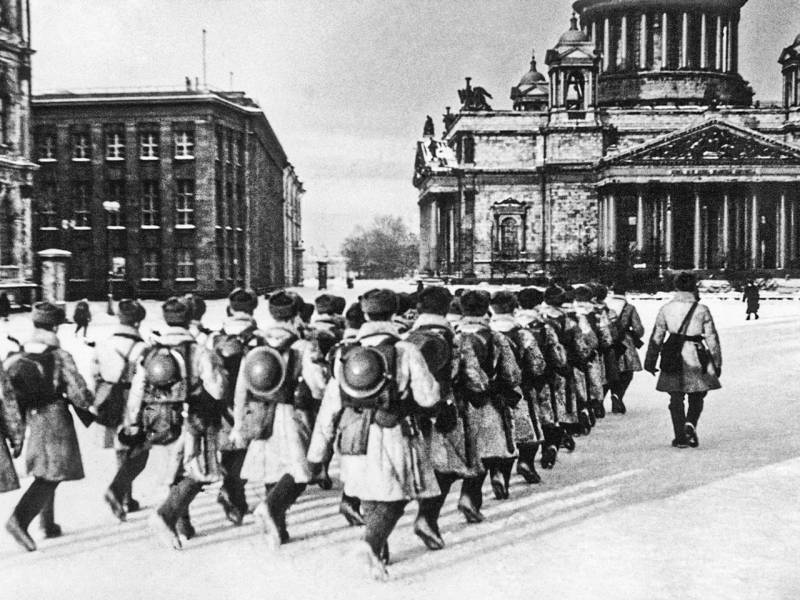 Or! This is not nonsense, it is quite the opposite: a conscientious approach to historical component of the film. However, we’ll talk about the Frontier a bit later, but for now about a strange helmet.

But let's go in order.

This helmet was produced at the Leningrad Metal Plant, LMZ (many sources call the plant "metallurgical", but this is wrong).

It was a variation on the theme of the steel helmet of John Brody, a British engineer. Brodie’s helmet was a British response to “Adrian’s helmet” (well, the queen’s subjects could not walk in French helmets!) And were in service with the British army from 1915 to 1939 years, and in the US Army even to 1942. 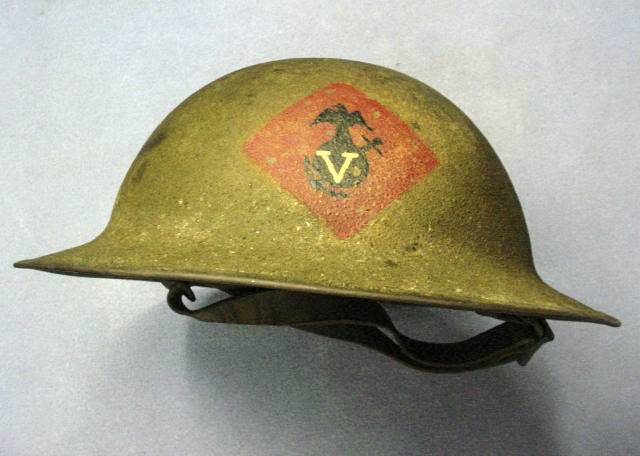 In the USSR, the helmet was known since the days of intervention, a fair number of them fell into the hands of the Red Army from the warehouses of the British army in the north.

At the end of the 30-ies in the Red Army seriously thought about creating a model of a steel helmet for air defense units and civil defense. Its main difference from the main steel helmet of the Red Army fighter was precisely in wide fields. And it was not just so invented.

The main purpose of the helmet is to protect the head and shoulders of an air defense or civil defense fighter from fragments and debris falling from above. It is worth noting here that the experience of using air defense weapons in the First World War showed that there is a possibility of destruction of the calculations of anti-aircraft batteries with their own fragments falling from a height of several hundred or thousand meters.

And m, multiplied by g, has not been canceled. 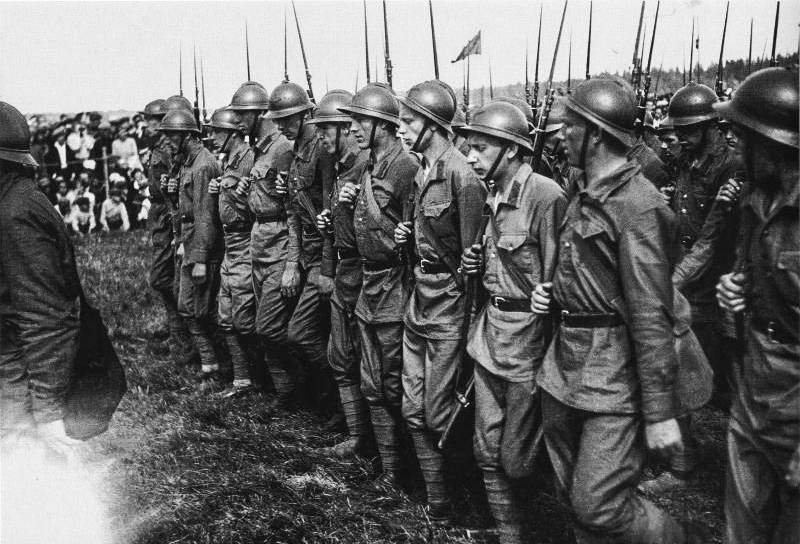 The same is true for civil defense fighters. Their main task in the future war was to help the calculations of firefighters, adjusting the flow of citizens to bomb shelters, and the like. 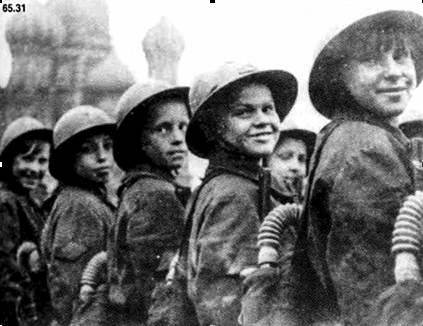 As a result, I needed a helmet:

1) is lighter than the standard army, designed for young people and women;
2) with fields to protect the head and shoulders against damage from above;
3) inexpensive to manufacture and with the possibility of mass production.

English helmet Brodie fit in all respects. And on the LMZ they mastered the production of a helmet for air defense fighters in 1938. Unofficially, the helmet received the marking M-38. 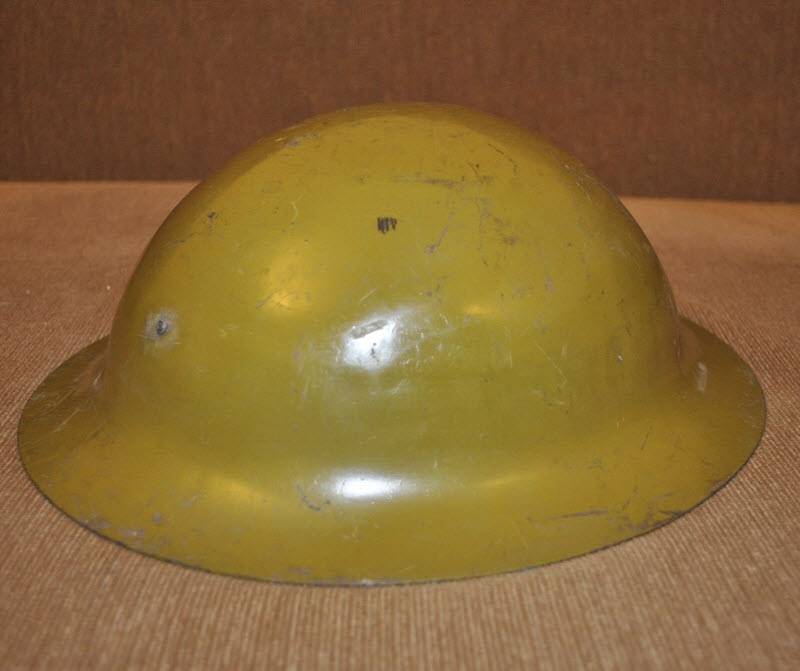 The helmet was made of steel 1,8 mm thick with the width of the visor rim 35 mm. The weight of the helmet was 1200 grams.

Production was carried out from sheet metal by stamping, so as to obtain a helmet of high strength. Stamping also made it possible to make this easy-to-produce helmet inexpensive and massive. 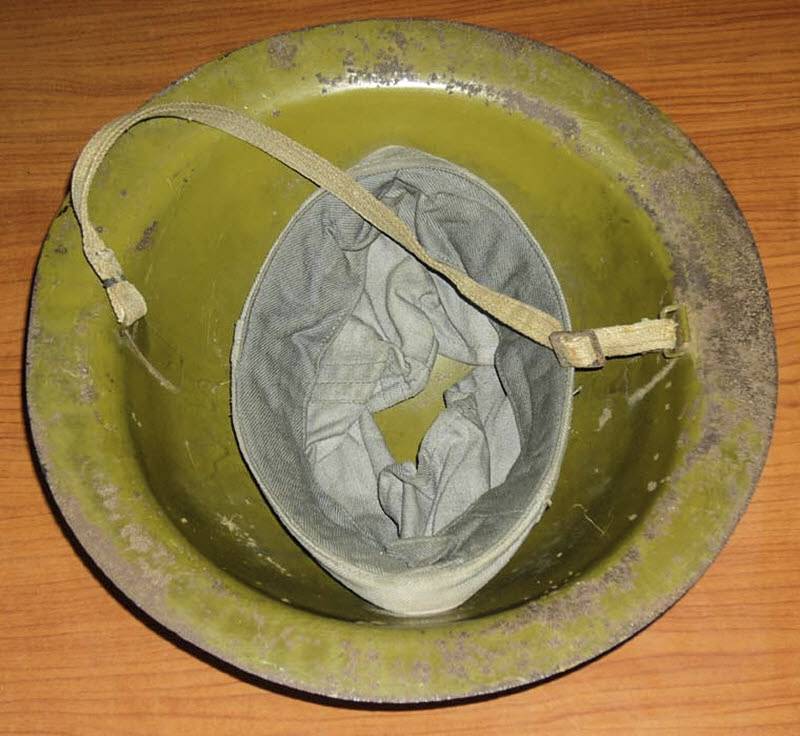 An emblem-drawing was supposed to be put on the helmet: the star at the edges of which was an anti-aircraft gun with a searchlight, in the rays of which the silhouette of an airplane was located below the center in a gas mask. 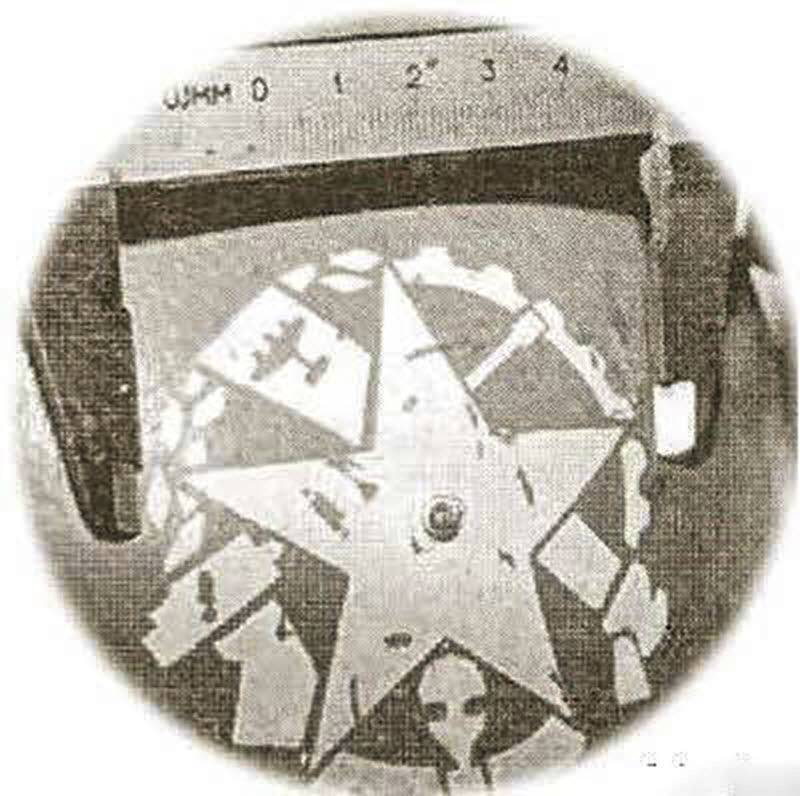 But often the helmet was simply painted in green or white, depending on the time of year.

When the blockade of Leningrad began, the helmet was also produced in the shops producing consumer goods of the Molotov and Karl Liebknecht factories instead of pots and basins. 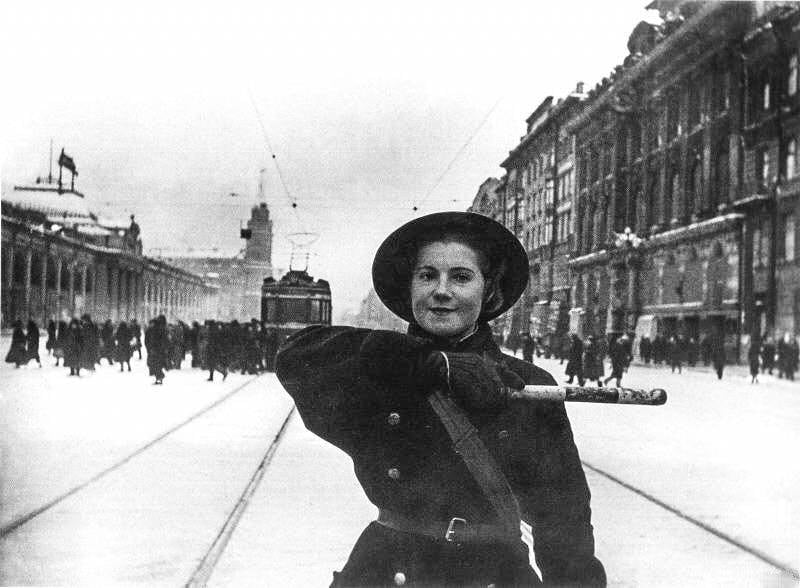 Naturally, from the metal that was available. These helmets and received the nickname "Blockade".

The weight of the helmet, made of steel "civil" nomenclature dropped to 850-950 grams, protective qualities, respectively, also decreased. But helmets - this is probably what the “Big Earth” was hardly thought of in the first place.

So Leningraders got out as they could and did it very, very successfully.

It is quite natural that, following the Air Defense and Civil Defense Forces fighters, Leningrad militia began to adopt the M-38 helmet. 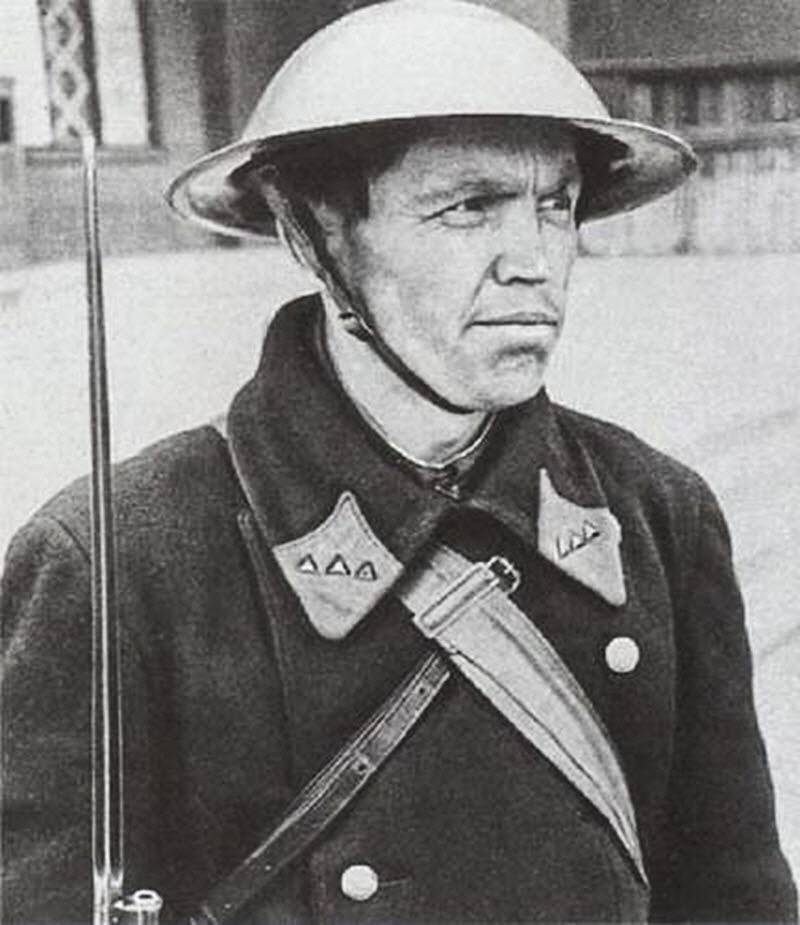 An air defense helmet, or M-38, was produced at Leningrad enterprises until the middle of 1943. The exact number of manufactured products is unknown, but, according to search engines and reenactors, even in our time, with a certain amount of luck, you can find such a helmet in the attics of old houses.

Yes, not a masterpiece. Yes, a copy of an old English helmet. Yes, they were made not from special steels, but from what was available in the blockade.

Nevertheless, the Blockade M-38 did its job: it defended the heads of those you saw in the pictures.

Such is the part of our history.