“Great Rifle US Drama” (Rifles by countries and continents - 7)

March 7 2018
12
On the eve of the war, the postmen of the famous Pony Express postal service armed themselves with Colt’s rifles, including eight people who operated on the most dangerous route between Missouri and Santa Fe. When doubts were expressed in the press as to whether only eight people could be responsible for the delivery of mail on this route, the Missouri government stated that “these eight people can make 136 shots without an overload if attacked. Therefore, we have no concerns for the security of the mail. " And yes, indeed, the mail on this route was delivered on time. All in all, the US government on the eve of the war between the North and the South purchased its carbines and rifles of this type from the Colt 765. Moreover, many of them were sent to the southern regions and in the end they were used by the Confederation. The revolving rifles of Berdan were used by the “arrows of Berdan” and showed themselves generally well. Equipped with a sniper sight in the form of a long tube, they allowed to confidently hit targets at a distance of 500 m. And besides, to fire without taking the butt from the shoulder! In the army of northerners, Colonel Hiram Berdan already in June 1861, created the first sniper regiment. In the battles, he proved himself from the best side, so that the command of the northerners soon created several more sniper units, which conducted reconnaissance and accurately destroyed enemy officers. True, Berdan himself already in 1862, changed the Colt rifles to Sharps rifles. The revolver rifles, which were loaded with gunpowder and bullets, proved to be very traumatic. 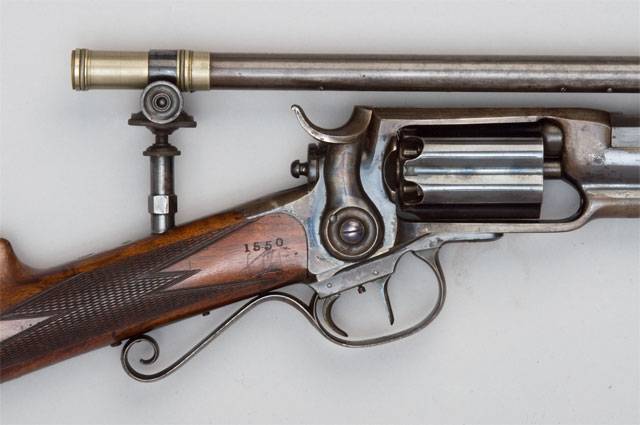 Colt sniper rifle scope and its mount on the neck of the box. 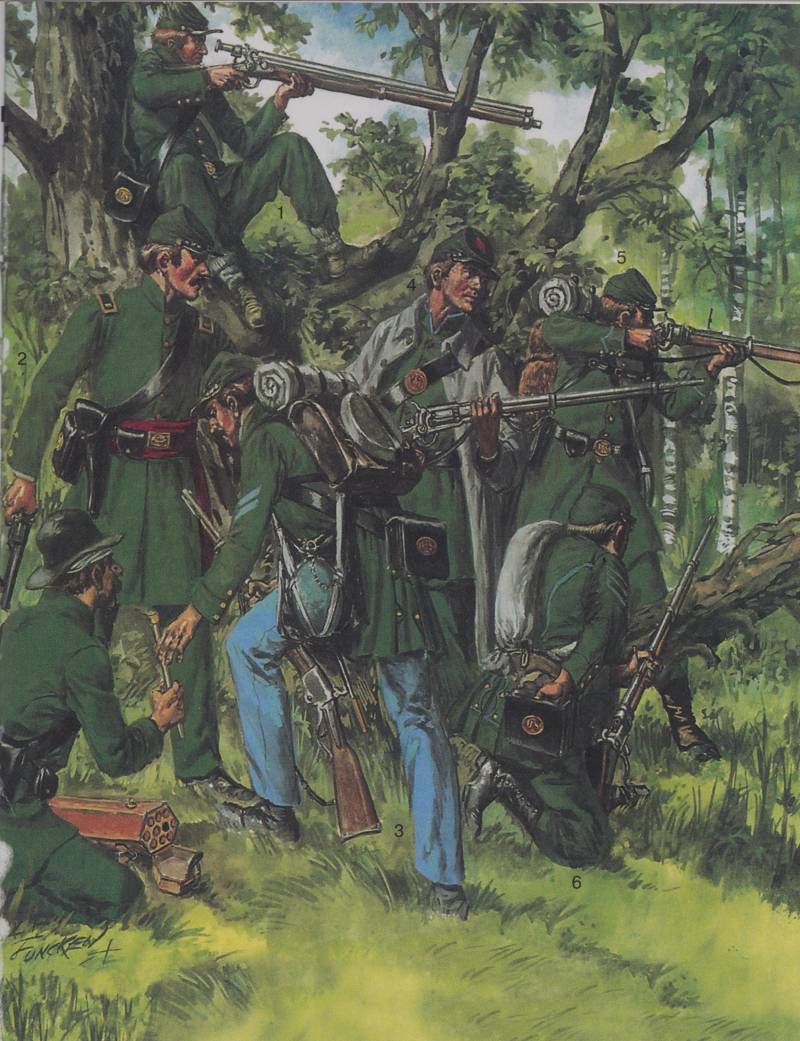 After the outbreak of war, the Union army acquired many more Colt rifles and carbines. Sources report approximately 4,400 - 4,800 copies acquired in total throughout the war. The effectiveness of this weapon was shown, for example, by the Ohio 21 Volunteer Infantry Regiment on the Snodgrass slope during the Battle of Chicamaug. The regiment fired so intensely that the troops of the Confederation were convinced that they were attacking a whole division, and not just one regiment. True, then the northerners ran out of ammunition, and they surrendered. Nevertheless, the flaws of the rifle were also obvious, and after the end of the war, all remaining copies were sold into private hands at a price of 42 cent each, at their initial cost of 44 dollars.

Original revolver rifles were produced at that time by other designers. So, in 1855, by Alexander Hall in New York, this rifle with a drum magazine designed for 15 charges was released! The rifle, as is clearly seen, is encrusted with various figures and, apparently, is a piece of work.

As always, there were people who wanted to do everything differently than others, and they were looking for their own ways. However, many inventors simply wanted to bypass other people's patents and they also hoped, “what if it turns out ?!” So ​​rifles and revolvers appeared with a horizontal or even vertical position of the store, which had the shape of a ... disk! 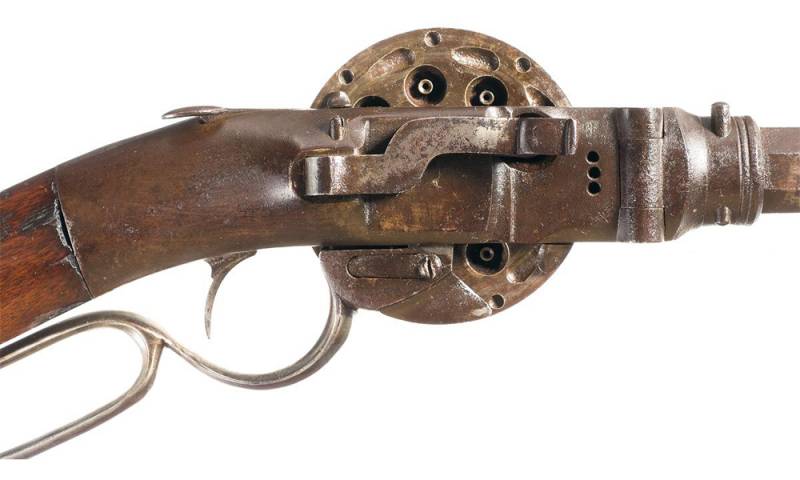 Cap gun with a Cochran and Danielson disc shop.

So, in September, 1856, someone Edmund H. Graham from Biddeford, Maine, received several patents on an original .60 caliber rifle with a five-shot horizontal-drive magazine. Aware of the predisposition of such systems to self-ignition, Graham set up his shop inside a protective metal ring designed to block an accidental shot, and in addition unrolled all the chambers 72 degrees apart.

Graham's disc drum. View from above.

Since such a device did not allow the cameras to be charged from the butt, he figured out how to charge them from above, through special holes. Primers respectively were placed on the "nipples" located around the base of the store. The loading of the chamber was carried out alternately. As soon as one chamber was charged, the shooter pushed the next chamber into its place, pulling the lever mounted on the right side of the frame. This action also blocked the hidden trigger located in front of the store base. The design was unique in its own way, but ... "did not go."

The Henry North and Chauncy Skinner rifle was patented in June 1852 (US Patent No. 8982), and the first samples were made in metal from 1856 to 1859 by Savage and North (led by Henry North and Edward Savage, not Arthur Savage, who developed 99 Savage ”). A total of about 600 such rifles were manufactured, with approximately 20% having a .60 caliber, and the rest were carbines .44 of a caliber. Unlike many revolving rifle constructions, North and Skinner functioned due to the work of the lever, and the trigger bracket served as a lever, as in the Winchester rifle. 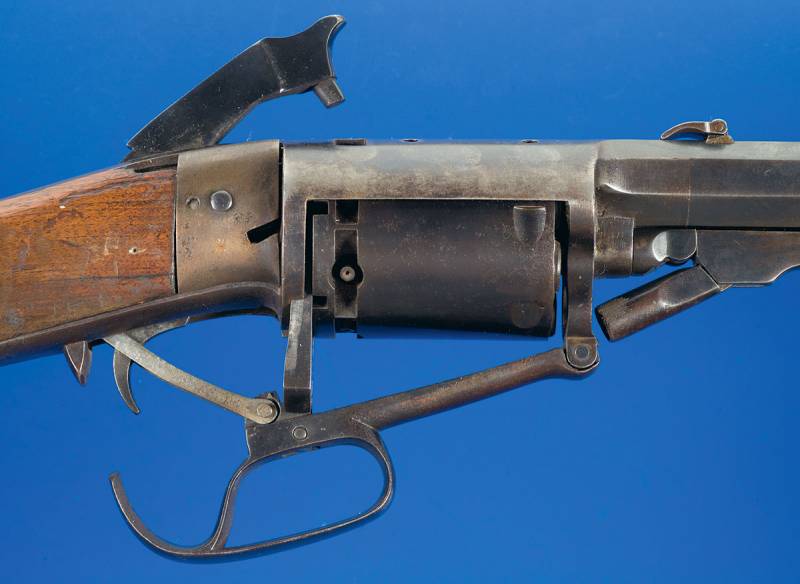 North and Skinner revolver rifle devices. The "igniter" is clearly visible for a dense bullet point in the chambers and the device of the lever-cramp.

To protect the shooter from the explosion of the drum (which, as we know, was a serious problem for all revolver rifles), the designers had a locking wedge that pressed the magazine to the barrel just like it was done in Nagan M1895 revolver. How well it worked, now hard to say.

However, perhaps the most unusual rifle of this time and outwardly very similar to the revolving (although in fact it wasn’t her!) Was Sylvester Howard Roper's (1823 - 1896) magazine rifle, which received a patent for it in April 1866. The cartridges in it were located in a stationary drum with a lid on top, but in reality it was a rotary magazine, similar to the one that was used twenty years later in the Mannlicher-Schonauer rifle. 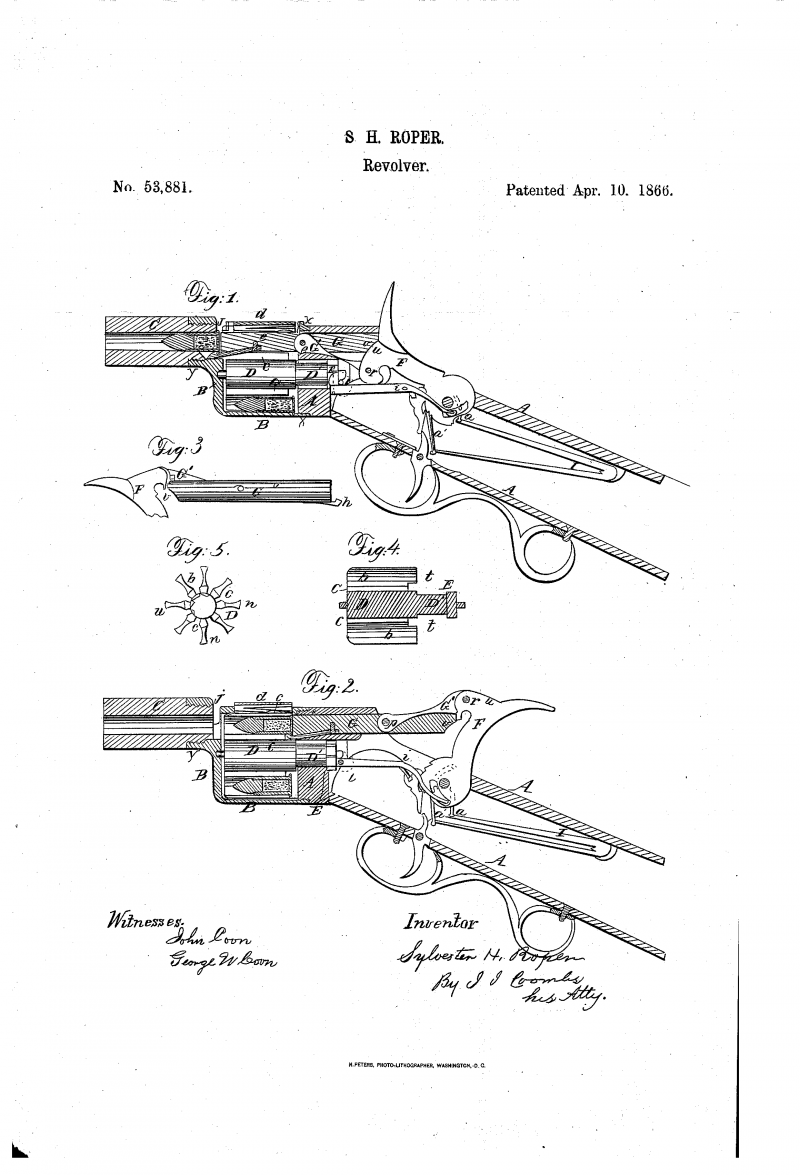 Diagram of the device Roper's rifle under the patent 1866

The turning of the magazine was carried out by the ratchet on the rear end of its axis - with each cocking of the trigger, the next cartridge appeared opposite to the chamber. With the trigger pivotally connected shutter, longitudinally sliding in the receiver. After pressing the trigger, he pushed the bolt forward, and he pushed the cartridge from the magazine slot into the chamber, and the trigger, resting against the bolt, ensured reliable locking, and at the same time the hammer worked, kicking the charge and igniting the cartridge. With the new cocking of the bolt, the ejector case of the bolt ejector pulled back into the store, which was turned with a ratchet and again fed another cartridge to the disilline line. After that, it was necessary to open the door and ... remove all the spent cartridges, which, by the way, could then be reloaded again!

Since the store was located inside the receiver, even with a long shot, the shooter did not risk anything. Incidentally, the design of Roper's rifle cartridges was no less unique than herself. The fact is that at first in his rifle the usual for that time cartridges with a ring ignition .38 caliber with a developed rim were used. This rim was the cause of frequent delays during filing the cartridge in the chamber, so the designer developed his own cartridge, devoid of the lack of welded cartridges. For a rifle, liners with an unusual shape of a bottom were invented - its rim was much smaller than the diameter of the sleeve itself, and a groove was made in front of it, because of which Roper's cartridge was somewhat like a weight for a scale or a modern .41 Action Express ammunition. Another feature was a bullet completely recessed in the sleeve (as in the cartridges for the Nagan МХNUMX revolver). In addition to smoothbore weapons, the factory also produced .1895 caliber rifles, with a magazine for six or five rounds of Roper's design. 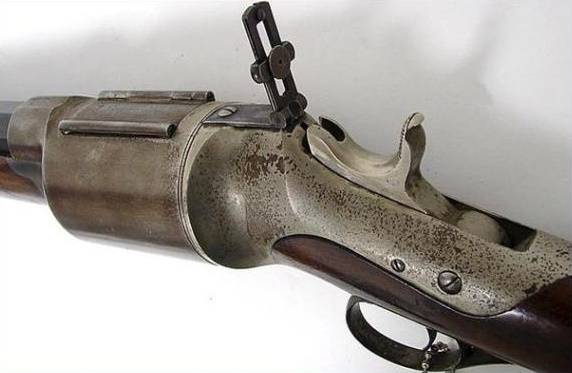 The appearance of the shop Roper rifle. The cover of the store is clearly visible.

The bullet of the .41 cartridge with a standard charge left the barrel at a speed of 335 m / s. In the period 1872 - 1876. It was made about 500 of these rifles, most of which had a six-round magazine. However, Roper's rifles were not in great demand, although durable cartridges, in the presence of primers, allowed dozens of reloads, which was beneficial to residents of remote villages.