February 28 2018
10
The end of the XIX - the beginning of the XX century was really a very interesting time: progress not just did not stand still, but ran forward with leaps and bounds. New technologies, scientific discoveries, the search for more advanced materials - all this could not but affect the firearm weapons, which in a couple of decades has received such an impetus for development that even now, many weapons models developed a hundred years ago are relevant.


How they tried to cross a revolver and a gun

It was during this time period that revolvers began to give up their leading position to self-loading pistols. At first, reluctantly, clinging to the armies of the armies and police of different countries, the people's distrust of everything new, but still the revolvers had to not just make room, but finally give up, since the advantages of self-loading pistols were confirmed many times over, and even the most persistent skeptics surrendered. 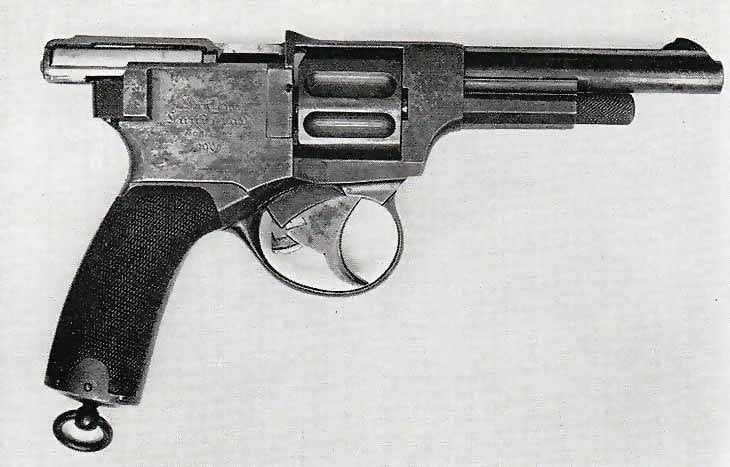 In the process of replacing revolvers with pistols, controversy repeatedly flared up about which weapon is better. Even now, many are ready to defend their love for revolvers, although there are very few really weighty arguments left. Reliability and dependability has always been considered the main advantage of revolvers, and it is difficult to argue with that. Relatively slow moving mechanisms with minimal sharply increasing loads will always be more reliable. But in the context of firearms, the reliability of revolvers was understood somewhat differently. The main advantage of revolvers is their willingness to shoot immediately after the misfire, while with a pistol in this situation it is necessary to do a number of manipulations to extract the non-activated cartridge. Nevertheless, as time went on, the quality and reliability of ammunition changed and mostly for the better. Such a phenomenon as a flash in the pan has become so rare that for many manufacturers such a phenomenon is considered almost a disgrace, unfortunately, far from all manufacturers, but for most of them.

The second argument in such disputes is simplicity of design, with which it is also difficult to disagree, however modern machines greatly simplify and cheapen the production process, so this argument has certainly lost its relevance.

The third argument in favor of revolvers is their safety and constant readiness for use. And back - modern pistols are not inferior to revolvers by this criterion.

Among the advantages of pistols then and now they note a greater amount of loaded ammunition, faster reloading, a weaker descent force after the first shot, if only double action USM is not used, less weight, better balance ... In general, there is a lot of advantages, which allowed us to press revolvers. 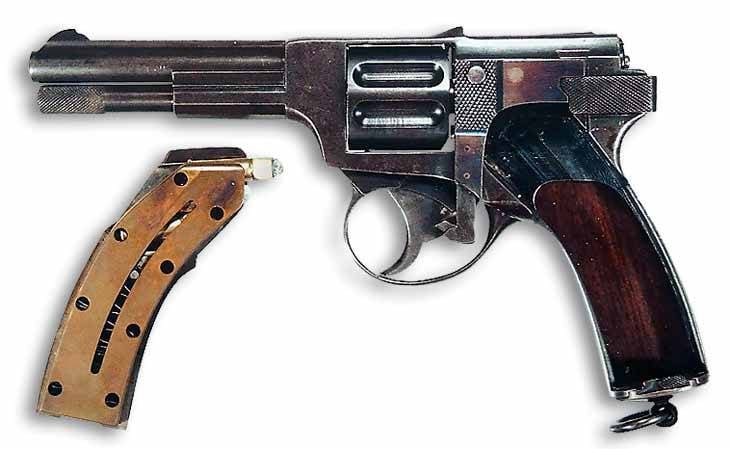 It is not surprising that in the process of distributing pistols, many designers tried to combine the positive qualities of revolvers with the advantages of pistols. By the end, by the way, it never happened to anyone. But there was a new class of weapons - automatic revolvers.

For most people who are fond of firearms, the expression “automatic revolver” is associated with the very original Mateba revolvers. These revolvers are really interesting both in their design and in appearance, perhaps to some extent they are not practical, but the charisma of this weapon covers all its flaws.

For those who are fond of firearms in more detail, automatic revolvers Mateba not news, because long before them, the automatic Webley-Fosbery Self-Cocking Automatic Revolver revolver was created. This weapon turned out to be quite interesting, as far as possible combining the advantages of a revolver and the positive qualities of a pistol, but for several reasons it did not find success.

There was an earlier model, which few people know about, namely the Landstad automatic revolver, and we will try to get to know it in more detail with it.

Appearance of the automatic Landstad revolver

Frankly speaking, it is difficult to call the automatic revolver of the Norwegian designer a revolver. Yes, it has a drum, yes, it rotates, but still it seems that this is not a revolver, but not a gun either. But first things first.

The appearance of the weapon for its time is quite ordinary: a massive frame and a thin curved handle, the only thing that does not fit into the overall picture is a flat drum and a too massive jumble of parts where there should have been a shutter of the weapon. 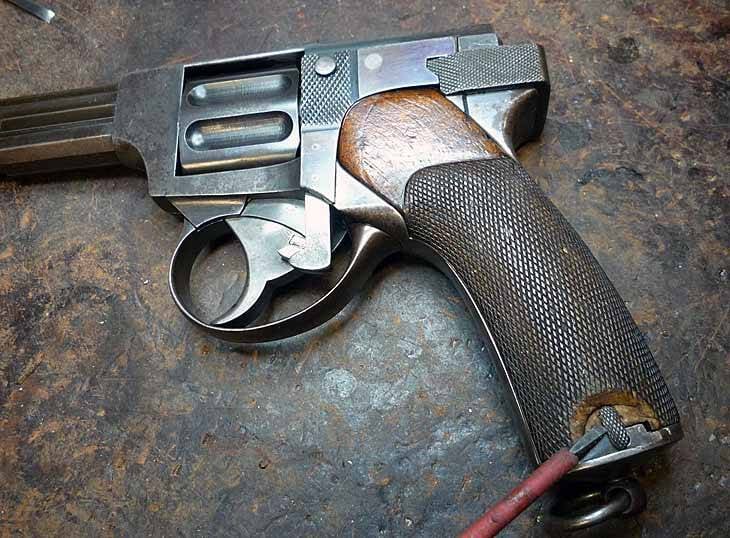 Behind the flat drum with two chambers, there is a shutter and two platforms for a more comfortable grip for operations with it. Directly in front of the platforms to hold the bolt of the weapon is the thrust connecting the trigger and the drum of the weapon. At the bottom of the handle of the revolver on the left side there is a cutout in the wooden lining in which the button is located. With its help, the handle opens to install the store in it. It is strange that the designer, creating a new weapon, did not provide for the possibility of replacing the store in a more familiar way for a modern person - from the bottom of the handle. To give preference to the shape of the handle of the revolver for the sake of convenience and speed of reloading and at the same time using a completely modern store is a very ambiguous decision. And yes, do not think, the author of the article was not crazy and absolutely sober, this weapon does have a drum and a store, but it’s a little bit more detailed about the design.

Aim devices are unregulated sight and front sight, the weapon does not have safety devices, although their presence would not be superfluous in this case.

The design of the automatic Landstad revolver

Before you dwell on the description of individual units of weapons, you need to give at least a superficial explanation of how it all works, because without it horses, people and drums with shops will be mixed up in a heap. 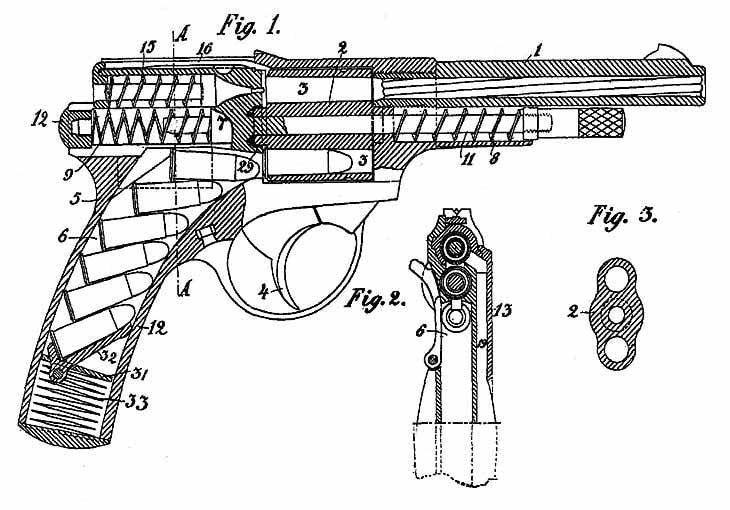 In order to make a shot, the weapon had to be loaded first. To do this, on the left side of the weapon was opened a pad on the handle with a part of the frame, on this pad was placed a magazine with a capacity of 6 cartridges, after which the pad together with the magazine was installed in its place. Opposite the first cartridge from the store was the lower chamber of the drum. When the shooter was delaying and releasing the bolt, the cartridge was fed into the lower chamber, and the drummer cocked. When you pull the trigger, through the long thrust located on the left side of the weapon outside the frame, the drum was rotated 180 degrees, so the lower chamber of the drum moved up and took up space opposite the barrel axis of the weapon. After turning the drum movement of the trigger led to the disruption of the drummer and a shot occurred. Next came the automation system, now known to us as the automatic shutter. Powder gases pushed through the bottom of the cartridge case the bolt of the weapon, which when moving back threw out the cartridge case, and when moving forward, inserted a new cartridge into the lower chamber of the drum. Thus, each press of the trigger turned the drum 180 degrees, without compressing the mainspring, which made the descent quite easy, albeit long. 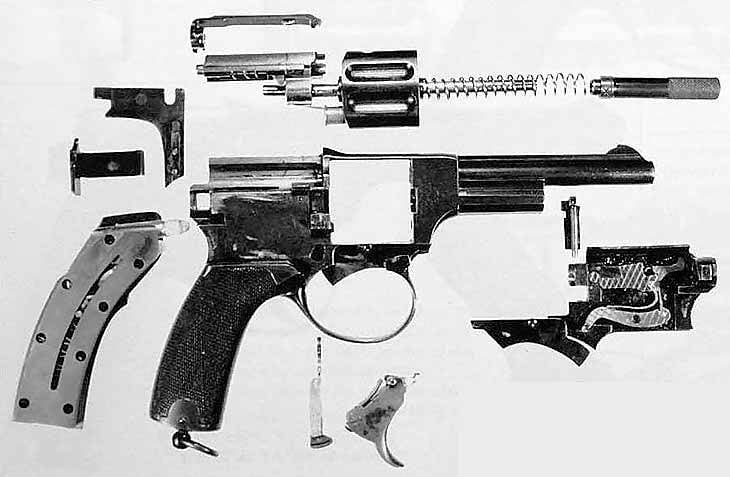 The trigger mechanism of the weapon, as is clear from the description of the work, shock, single action. In principle, another trigger is not needed here, since in case the shot did not happen for some reason, you still have to pull the bolt and release it, because without it the lower chamber of the drum will be empty, and therefore the new cartridge will not be served. 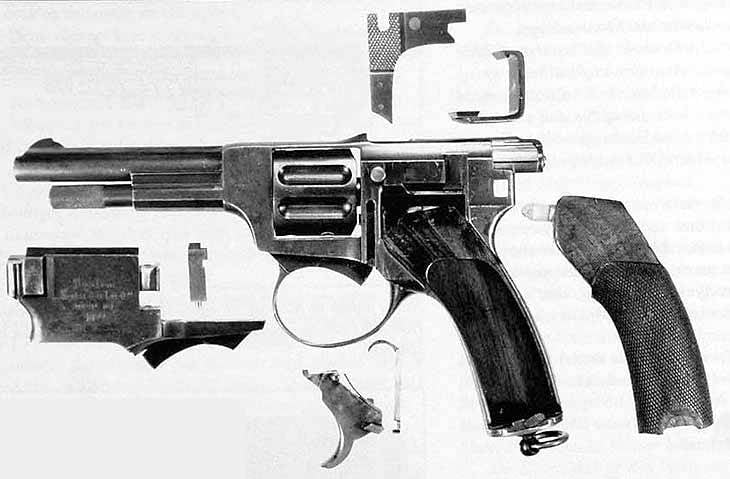 Based on the design of the trigger mechanism, it can be concluded that the force of pressing the trigger will be small, which means that there is a probability of a shot if you accidentally press it. But it should be noted that this is partially compensated by the length of the trigger stroke, as well as by the availability of free space for turning the flat magazine. When falling and accidentally disrupting the firing pin, the revolver will be completely safe, since the drum chamber in front of the barrel is always empty without fully pulling the trigger.

Pros and cons of Landstad revolver

I did not think that I would ever happen to meet a weapon, over the positive qualities of which I would have to wrestle with, but it seems that Landstad’s revolver is exactly that weapon. Among the advantages one can note a slight descent, but also revolvers and pistols with a cocked hammer also possessed and possess them, while a preliminary platoon allows only one hand to be used. The relative safety of the weapon in the fall and at the same time its constant readiness seems to be positive qualities, but the implementation of this is very specific. In general, it is unclear for what purpose this garden was fenced, as there are simply no advantages to the construction, but there are disadvantages above the roof. 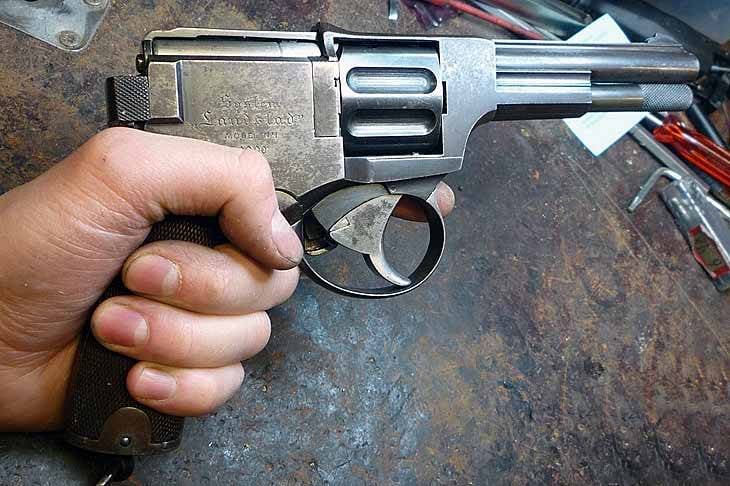 The main disadvantage of the design is its complexity. It seems that there are not so many details in the revolver, but they are all quite complicated to manufacture and require a large amount of metal. The capacity of the store in 6 cartridges 7,5x23R also does not give advantages, since the revolvers have the same ammunition. The speed of changing the magazine is quite comparable with the speed of reloading the revolver, provided that you have to equip the magazine, split the pistol grip, disconnect the empty magazine, insert a new magazine in its place, close the handle, and at the same time there will be three items in your hands. Even reload the Nagan M1895 with one cartridge, with proper skill, you can quickly. 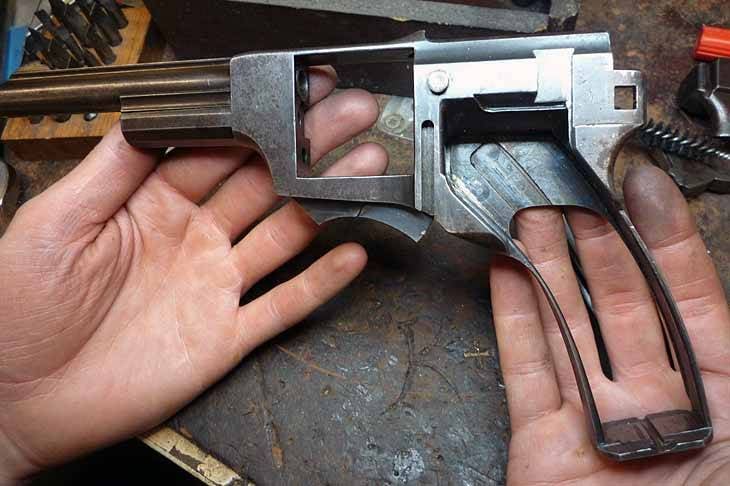 Having an open thrust from the trigger to the drum is also not the best solution in this design. The location of this draft makes the weapon very uncomfortable for left-handers or for injuring the right hand.

Certainly the design of the Landstad automatic revolver is very interesting, but it has no obvious advantages over the pistols or revolvers. It is for this reason that this revolver was not adopted by the army and was produced only by a small batch. Unrecognized then, this revolver costs a lot of money now, as the weapon is rare and unique. At the moment, the location of only one of these weapons is known, although more than 20 was produced for army testing of revolvers. It is possible that there was really only one revolver of this design, which makes it literally invaluable, since the thing is one of a kind.

It is completely incomprehensible how the idea of ​​creating this interesting, but very strange weapon was justified. However, using the example of this automatic revolver, one can see that the designers in Norway were and are, the mechanism is rather complicated, original, but irrelevant. However, this is not the first nor the last case when trying to invent a bicycle, the designer does the same thing as his colleagues, only with a drive to the front wheel or the rear steering wheel. It seems to be interesting and unique, but there is absolutely no sense in this. 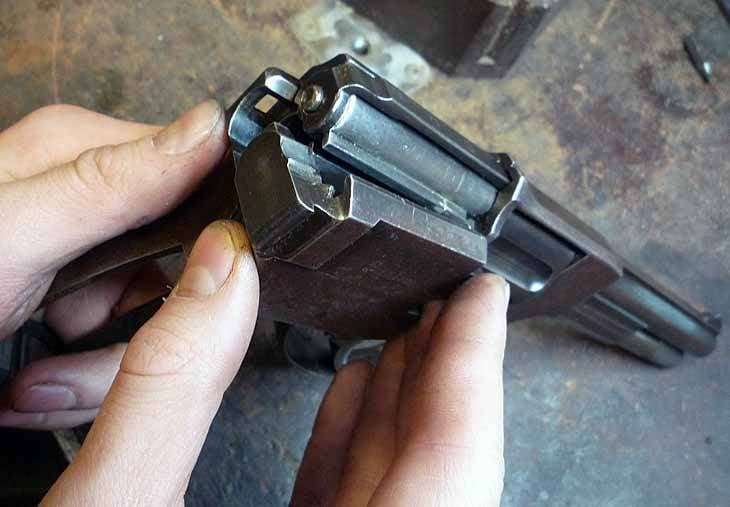 Usually, it is customary to write about unusual models of handguns that they were either ahead or late in appearance, but in this case, you can’t talk about time, but about the civilization in which this device appeared. Perhaps somewhere, where neither revolvers nor self-loading pistols are known, such a weapon would be a sensation, but not here.