February 24 2018
26
Among all the variety of Shot SHOW 2018, one cannot pass by the new pistol from Smith & Wesson. The pistol stands out not only for its appearance, but also for the ammunition that it uses, at full size weapons... The fact is that previously under the .380 Auto cartridge, the manufacturer did not produce full-size pistols in the M&P line of weapons, limiting itself to compact models, so this weapon model should close the resulting niche. 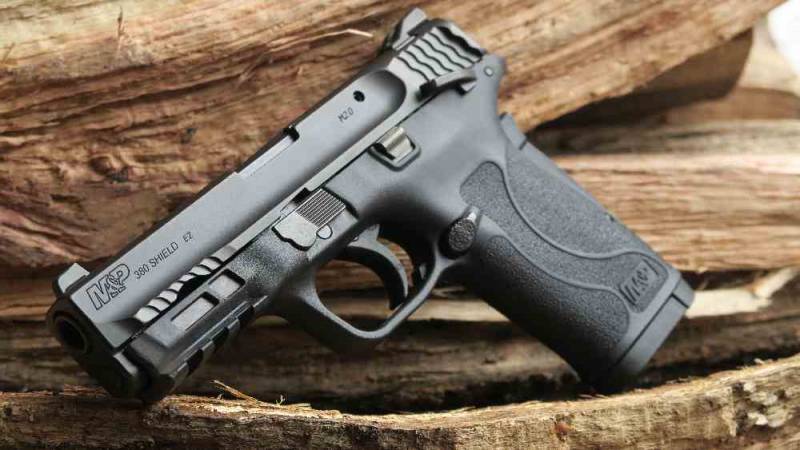 Appearance of the M&P 380 SHIELD pistol 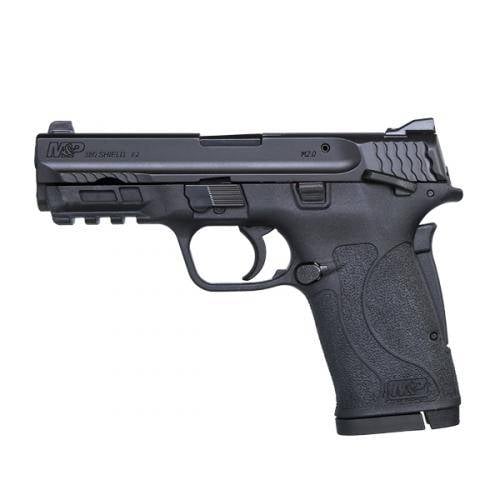 The first thing that catches the eye in the appearance of the weapon is the automatic safety key on the back of the handle. In modern weapons, this is a rarity, except perhaps for pistols based on the famous Colt M1911, and even then this part is often removed from the design. There is an opinion that this fuse key is inconvenient to use, it’s strange that copies of Colt M1911 are still made with this key, but not about personal preferences and Internet beliefs now.

The pistol is produced in two versions: with and without a safety switch. Many fans of firearms criticized this weapon and its "one-sidedness" in the version of the weapon without a safety switch, the right side of the pistol is absolutely clean, only the magazine release button can be moved to the right side. The slide stop button and the weapon disassembly lever are located on the left side. What is the end result? If we take the version of the M&P 380 SHIELD pistol with a safety switch, then the switch is located on both sides, the magazine eject button can be rearranged, so I recall the words of Ivan Vasilyevich, who changed his profession, “What else do you want?”.

The casing of the shutter of the weapon has wave-shaped notches on the sides in its rear part and their similarity is in the front, so that the grip in order to pull off the casing-shutter can only be “unfashionable”, behind the rear part, and not at the front.

Under the barrel is a seat for additional devices. 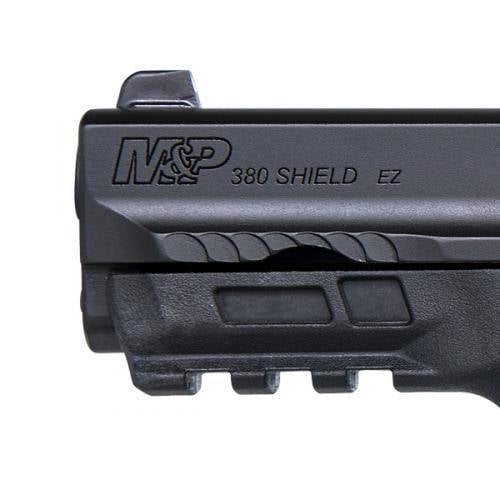 Despite the fact that chambered for .380 Auto would be more logical to use an automatic system with a free gate, the designers decided to take a different path and stopped at a more complex use of recoil energy in the short course of the barrel. This is explained by the fact that there are quite powerful .380 Auto cartridges on the market, the regular use of which can lead to premature failure of the weapon. In addition, such an automation system, in combination with modern materials, makes it possible to slightly lighten weapons, and even 20-30 is a gram of weight, many perceive it as a serious argument in favor of a lighter gun, and in advertising this fact can be indicated by limiting vague “easier "And it seems like not lying.

Speaking of advertising. The company's promotional video separately states the ease of disassembling the gun. Indeed, what could be simpler: remove the magazine, retract the cover-bolt and put it on the bolt delay, turn the lever to disassemble the weapon 90 degrees, holding the bolt-cover, remove it from the bolt delay and pull it off the frame of the gun. After all, really simple, apparently, therefore, this procedure is similar to more than half of modern pistols. 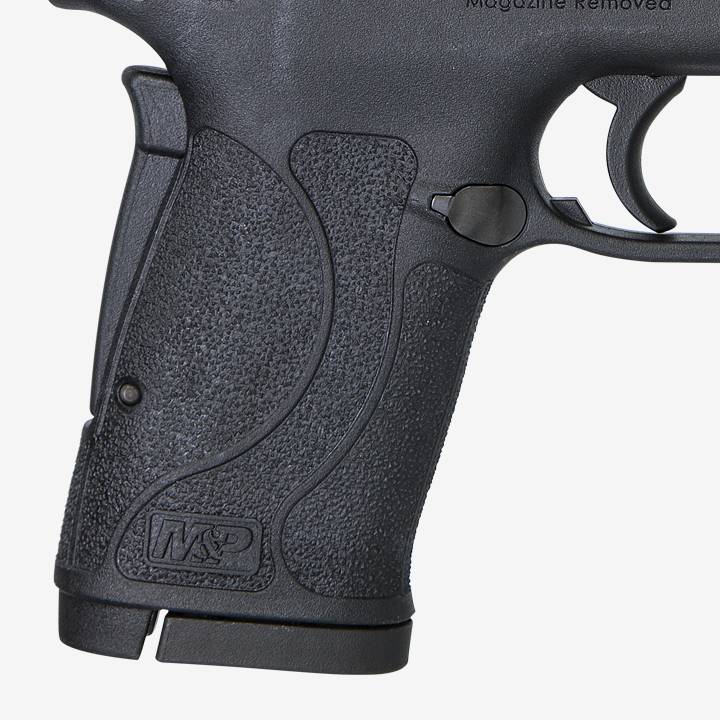 Shock trigger trigger for a modern pistol is not new, with pre-arming.

Characteristics of the M&P 380 SHIELD pistol

The length of the gun is 170 millimeters with a barrel length of 93 millimeters. The weight of the gun without ammunition - 524,5 gram. It feeds weapons from single-row stores with a capacity of 8 cartridges .380 Auto.

Pros and cons of the M&P 380 SHIELD pistol 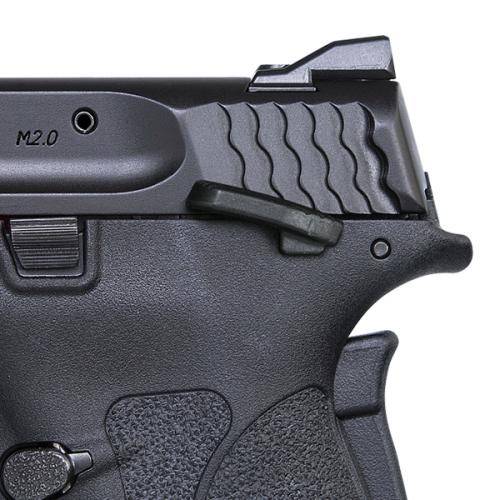 The main advantage of the new weapon is its weight, while the gun itself is not “pocket-sized”. That is, its use is not limited only to self-defense, it can be successfully used for entertaining shooting, but due to not the most powerful ammunition, this gun is also suitable for training in shooting. It turns out a kind of universal weapon for the civilian market without any obvious advantages, but at the same time coping with the tasks entrusted to it.
As well as obvious advantages, the weapon does not have specific negative features, except for small details that can be called nit-picking. Judging by the quality of the previous models of the M&P pistol series, there should be no complaints here either. 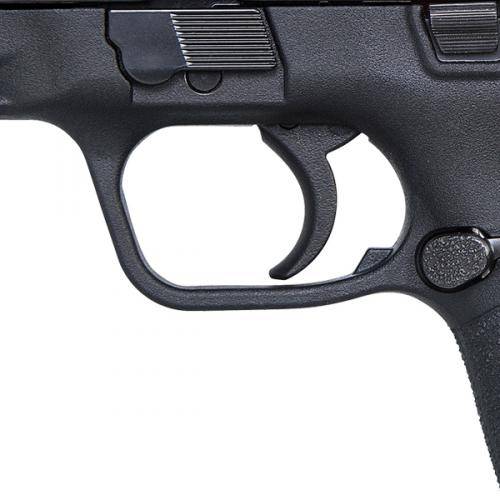 In the end, you still need to note the presence of the automatic fuse key. Regardless of what views on this element a person adheres to, there is always common sense, which usually puts everything in its place. An alternative to the automatic fuse, in the form of a key on the back of the handle, may be a trigger key, which has become quite common, thanks in large part to Glock pistols. Let's try to estimate how high the probability of a random shot in the first and second variant. It is clear that in the first and second cases a random shot is virtually impossible, since too many stars must converge in the sky for such an event, but nonetheless. If we discard the force of pressing the trigger as another factor of protection against an accidental shot, then for a shot with a key on the trigger, you only need to successfully fall with any object on the trigger and just as successfully move the gun. In the case of the key on the back of the handle, you have to hit the trigger, hit the key on the handle and press it all. 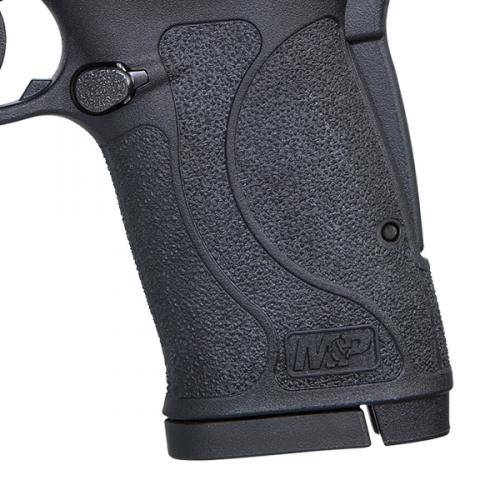 Of course, this is all more like paranoia and both options are safe enough. In addition, no one bothers to use the fuse, which is in one of the variants of the M&P 380 SHIELD pistol. Well, everyone knows that the safest pistol is a pistol without a cartridge in the chamber.

A noteworthy point is that the Military & Police series pistols are slowly becoming purely civilian. Even the manufacturer himself positions this weapon as a means of self-defense for daily wear, as a pistol to protect the house and a weapon for security.