“Great Rifle US Drama” (Rifles by countries and continents - 6)

February 26 2018
20
Theme small weapons The USA of the middle of the XIX century aroused a keen interest of the IN readership audience and offers to continue it. Well, why not, especially since the last time one of the directions in which it developed there, this time has not been considered ...


To begin with, one of the ways to increase the rate of fire of firearms (and, probably, the simplest) was initially to equip it with several trunks at once, which made it possible not to spend time on their loading, but to fire them alternately. That is how the 16th century multi-barreled pistols appeared. and later "Marietta" and "hand of death", but it is quite possible to say that the immediate predecessor of all these killer "organs" was the so-called "sprinkler" of the English king Henry VIII, named in the inventory of the Tower by his ... "recreational device". It represented itself by itself ... of a terrible kind of spiked club, inside of which three trunks were hidden. The firing holes were closed with sliding covers, well, and the monarch had to hold a smoldering wick in his hand. If necessary, it was necessary to aim the weapon at the enemy, holding it under the arm, move the cover and attach the wick to the gun-filled firing hole. Well, having shot like this three times, Heinrich — God didn’t hurt his blessing by force — could stand up for himself, using his “sprinkle” as his usual spiked club. 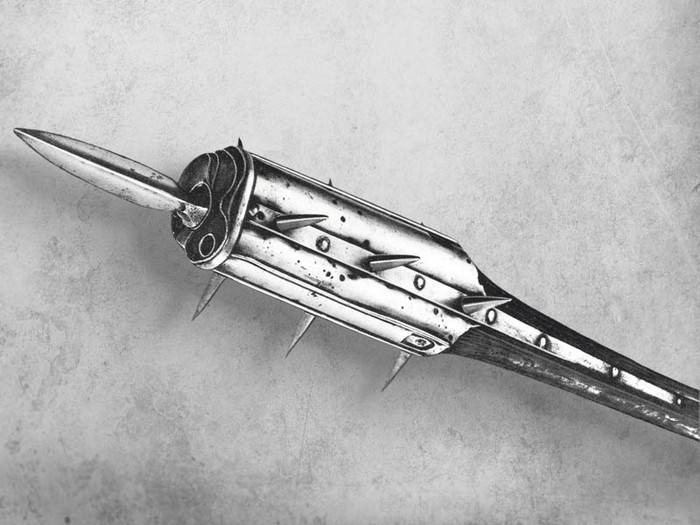 But multi-barreled weapon. Therefore, in the same XVI century, they squeaked with wick locks, in which the charges were in a drum with several cameras. In the 70 of the XVII century, English gunsmith John Duft made the first revolver with a rotary drum, rotated during cocking. In Russia, master Pervusha Isaev, who worked in the Armory Chamber, made both pishchal and a revolver with drums for five and six charges, respectively, for Tsar Mikhail Fedorovich. True, the drums were turned by hand, however, and what he did was a great achievement, not to mention the fact that both the food and the revolver had rifled barrels! So the system with the drum content of ammunition is very old, and slowly but surely improved. And the first serious steps on this path were again made precisely in the USA.

And it was that someone Elisha Collier (1788 – 1856) from the city of Concord in Massachusetts designed a revolver with a flint lock, for which in November 1818 received a patent. He was not interested in the US military. The war with England ended in 1812, a new one was not expected and they simply didn’t need a need for such a complex and expensive weapon. But he became interested in the military in England, where from 1819 to 1824, the London-based company, John Evans and Son, produced about 10000 copies of Collier's revolvers. The novelty was tested in India, where officers of the British colonial army were armed with a new revolver. There is a very high probability that it was there, in India, that Samuel Colt, who sailed a sailor to India in the 1831 on the brig Korvo, saw him. And when he saw it, he wanted to do something better.

The drum of the Collier’s revolver of figured form, equipped with figured grooves for weight reduction, had five chambers. Due to the presence of the drum, it was not possible to place the load spring under the lid of the powder shelf, and it was installed above it. Another original solution of the inventor was a container with gunpowder in the lid of the powder shelf! That is, in fact, it was a dispenser, each time sprinkled powder on the shelf when turning the drum. It was convenient and, moreover, significantly increased the rate of fire. In the early models, the drum was turned while cocking. But then such a solution was considered redundantly complex, the design was simplified, so that in the end it had to be twisted manually. Despite the good combat and operational qualities, the revolver did not become very popular. It was a long time to charge, and the flintlock gave quite a few misfires.

It is hardly worth telling. history Samuel Colt created and eventually created his first Colt Paterson. What is important is that, simultaneously with the revolver, he also developed a rifle with a drum mechanism and blasting ignition. The work began in March, and soon the rifle of the .34, .36, .38, .40 and .44 calibers was ready, in which the trigger was hidden (!), And its cocking and simultaneously turning the drum shop was due to the retract in front of the trigger with a ring at the end. And after this rifle, five-inch Paterson revolvers with folding triggers and with both levers for a tight bullet and without bullets in calibers .28, .31 and .36 went to the market.

One of the samples of a Colt rifle with a secret trigger.

In 1837, the Colt fired a .69 (17,5-mm) musket caliber ten-shot rifle, seeking to please the United States Army, and this was partly possible. The fact is that in the same year the Seminole War broke out, so colorfully described by Main Reed in the novel Osceola Leader of Seminoles. The American army had to fight in the virgin forests and marshes of Florida, where seminoles attacked its soldiers literally because of every bush. At the same time, they learned to quickly wait out the first salvo, after which they ran at the Yankee soldiers with spears and applied clubs in their hands. Not everyone was able to withstand this, but the soldiers simply did not have time to reload their flint and even capsule rifles a second time. 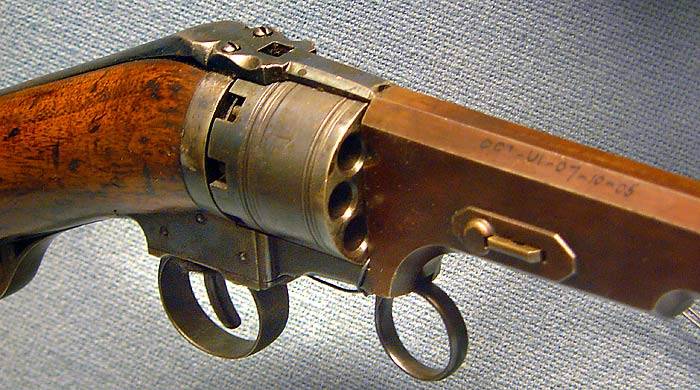 It should be noted here that the US military didn’t like this model either. Moreover, for this they had every reason. There were two main complaints, and both were very serious: first, a strong burst of flame between the barrel and the drum, only a few centimeters from the shooter’s eyes. In a revolver, this lack was not so strongly felt, because he was held in an outstretched hand. The second flaw was a consequence of the first. It was necessary to carefully cover the openings of the chamber with “cannon fat,” otherwise the flame from the ignition of one charge spread immediately to all the charges in the drum, in the immediate vicinity of the shooter’s hand. Well, if at that time he was holding on to the drum itself, but it happened. What happened to his hand then? 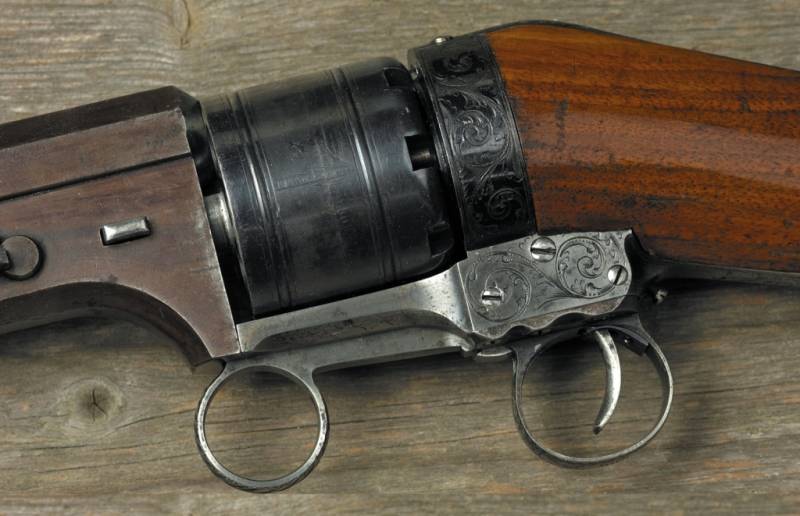 The photograph clearly shows the reload lever, that is, the rotation of the drum.

However, when I had to choose between these accidents and victims of seminole attacks, it turned out that ... it’s better to lose fingers than to remain without a scalp, or even not to return from Florida. And it turned out that from the first 100 17,5-mm rifles 30 drowned in the sea and only 50 were involved during the Second Seminolsky war. Newspapers reported that the new weapon is eight times faster than what is required by the charter, and allows one to meet the raging seminols with a barrage of fire, about which their most desperate gusts were broken. In turn, the commanders demanded that subordinates thoroughly clean their weapons and not allow the accumulation of waking up powder in various "secluded places".

Colt M1855 rifle with a lateral arrangement of the trigger and a lever located under the forearm for a tight bullet point in the drum chambers.

In 1839, Colt presented an improved model of his gun, and in 1855, he received a patent for a rifle with a lateral arrangement of an external trigger and issued corresponding samples of rifles. 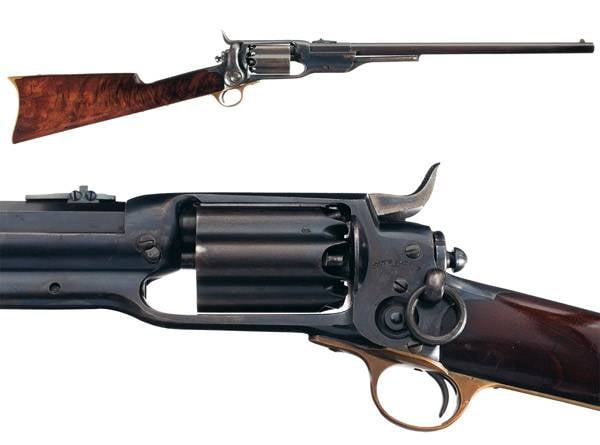 The design of the Colt's rotating rifle was essentially similar to its revolvers with five or six charging magazine of different calibers from 0,36 to 0,64 inch. 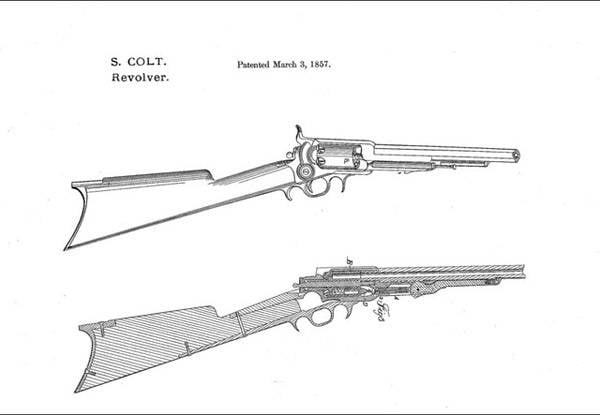 The scheme of the device Colt rifle on the patent 1857 year.

Cavalry carbine. The case for caps mounted on the bed is clearly visible. Near the pulley for two bullets.

Another problem rifles became primers. Rather, fragments of lead caps, flying in different directions when fired. And usually they fell into the wrist or hand of the shooter, in which there was nothing good. Nevertheless, Colt drum rifles were even used as sniper weapons and were used as such during the Civil War between the North and the South.