February 19 2018
30
Attempts to combine firearms weapon with a cold one, probably, began when the first primitive pistol had just appeared. It is hard to say whether these attempts were successful, since as a result of this symbiosis it was very rare to make the firearm part complete and good, if the knife itself did not suffer, while remaining comfortable and functional.


This year another similar knife was demonstrated at the Shot SHOW exhibition, but this knife has a six-part firearm part of its design and a full-fledged barrel, which does not interfere with using the entire blade length. Let's try to figure out what this new "beast" is and how well the designers managed to combine what was previously compatible quite conditionally.

The cutting part of the shooting knife Arsenal RS-1

It should be noted right away that this knife is not a new product, it appeared as early as 2015, however, it was shown at the exhibition only now, so that it became widely known only this year.

What is this knife-revolver externally? Outwardly, it is quite an ordinary-looking knife, of which you can find thousands in specialized, and not very, stores. The only thing that can cause questions is the blade moved down in relation to the handle, the hole above it, and an excessively thick handle for such a blade, which, however, does not make the knife disproportionate. What else can be alerted in this weapon is its price of more than 2000 dollars, which, as it were, hints that the knife is clearly not for peeling potatoes and cutting sausage. The blade length of the knife is 165,1 millimeter. Unfortunately, there is nothing intelligible to say about the steel grade from which the blade is made - information differs in different sources. Perhaps the manufacturer changed the grade of steel from release to release of these weapons.

But we are not interested in the knife itself, but in its handle, in which the real revolver is placed. So by pressing the button, which acts as a kind of pommel, the handle can be divided into two parts. Inside these halves of the handle you can see the drum and barrel, as well as the firing mechanism. In practice, it all works as follows. In the handle, in the recess under the fingers, there is a protruding metal plate, when it is rotated 180 degrees, a lever is released, which causes the mechanism of the revolver. So when you press this lever, there is a turn of the drum and a platoon, and subsequently a breakdown of the drummer, which leads to a shot. From the drum to the guard, the barrel of the weapon is placed, the muzzle of which is a hole in the guard above the blade. 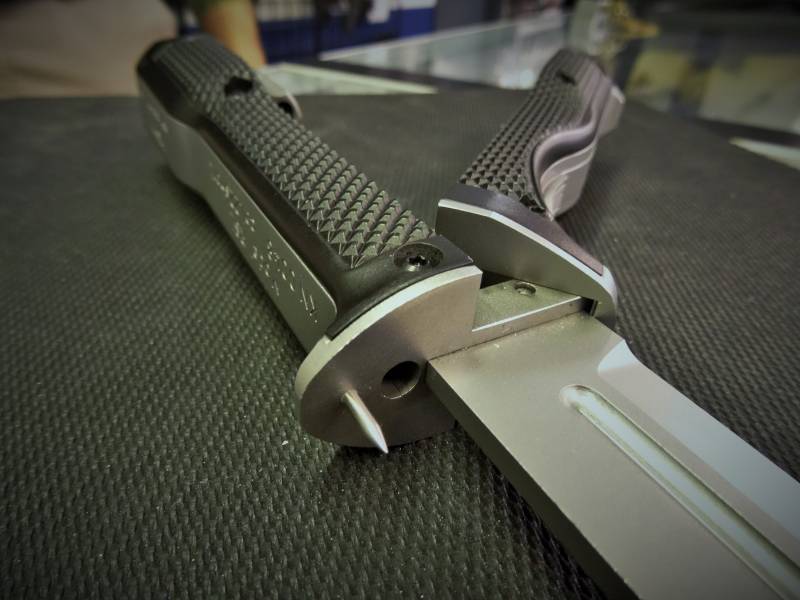 Of the interesting features of this design can be noted that the ratchet wheel is placed in front of the drum, and not from its rear part. The drum itself has an 6 cartridge chamber. The design does not have a trigger, the drummer is made a single piece with the axis of the drum, the axis itself is movable and a twisted combat spring is installed on its front end. Actually the design is simple to impossible. 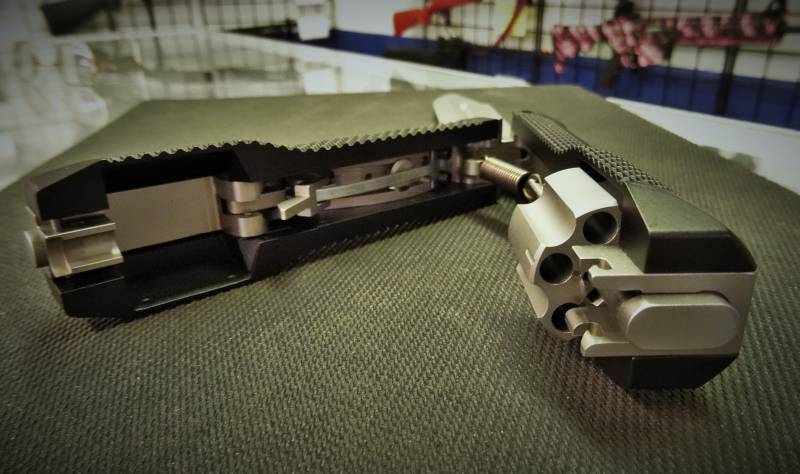 The trigger mechanism of the double action is tight enough to exclude a random shot. However, this also affects the accuracy of shooting from this unusual weapon. By and large, you can confidently hit the target only at those distances at which you can reach the target with a knife.

It is strange that the manufacturer did not bother to install even the simplest and cheapest laser designator, which would significantly increase the range of the weapon. Moreover, there is still room for this inside the knife handle. In order for the shooter not to stick his finger in front of the barrel, a sharp spike is installed on the guard, which will immediately remind you where the barrel is located on the weapon. 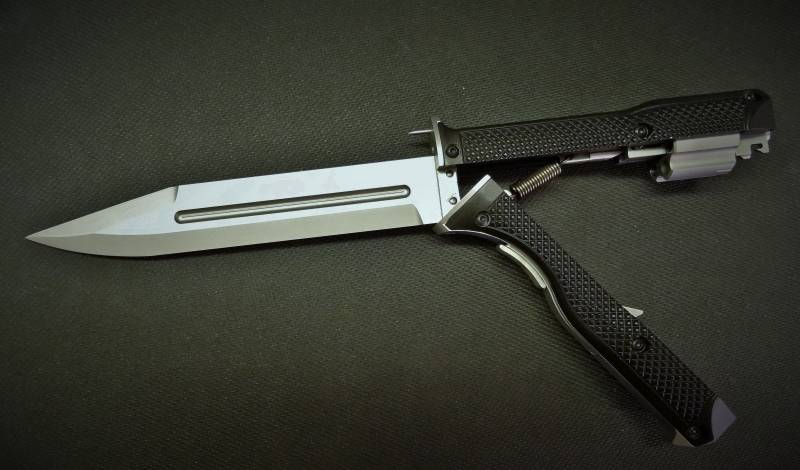 For cleaning, as well as reloading the gunshot part of the knife will have to open the handle. Extraction of spent cartridges occurs one by one, as well as the equipment of the weapon with new cartridges. With the handle open, the drum rotates freely on its axis. 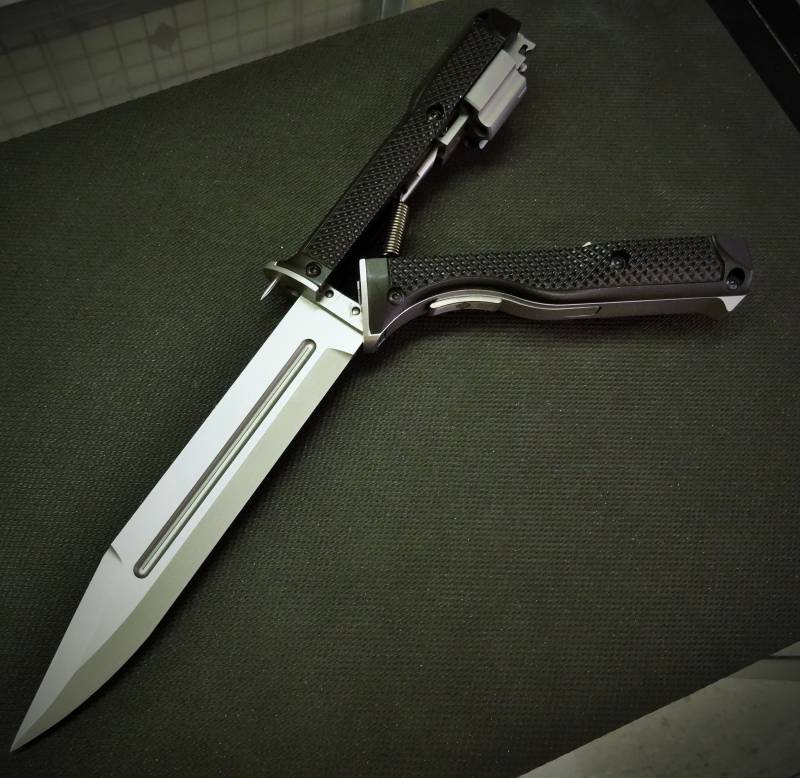 It is quite logical to ask how the designers managed to place a six-shot revolver in the knife handle, which, although it looks thick, does not seem so thick that both the drum and the barrel and firing mechanism would fit in. The answer lies in the ammunition used, namely the .22 Short cartridge. This old, but still popular cartridge, by virtue of its compact size and modest characteristics, makes it possible to create really small samples of weapons on its base. For compactness, you have to pay with combat characteristics, which is the main disadvantage of the Arsenal RS-1 shooting knife. Interestingly, the manufacturer made a short drum to exclude the use of .22LR cartridges, apparently, the design is not strong enough for certain variants of these munitions.

Cartridge .22 Short and what it can do

This part of the article can be safely missed by those who have an idea about this ammunition and its capabilities, but for the rest I will try to outline in general terms how effective this cartridge is and what to expect from the weapon that uses it, including the Arsenal RS- shooting knife 1. 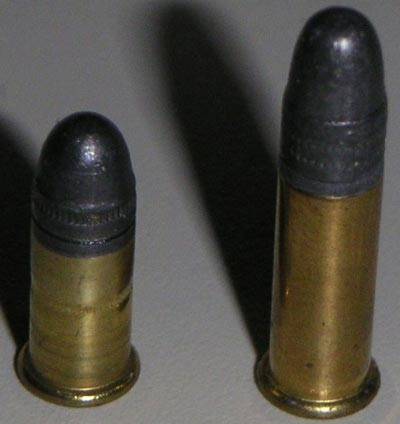 The .22 Short was introduced in 1857 and was one of the first metal-cased cartridges produced in the United States. At the time of its appearance, this ammunition was used only in the Smith & Wesson Model 1 revolver. An interesting fact about this weapon is that it was from the revolver of this model that Wild Bill Hickok was shot, at the time of the shot he had a combination of cards, which later received the name in poker Dead man's hand. From this we can conclude that a weapon chambered for .22 Short can be killed and this ammunition should not be neglected. However, everything is learned by comparison, and if we talk about whether you need luck to successfully use the .22 Short, then let's say that luck is an accompanying element for every shot. There were cases when the bullet of this cartridge did not pierce the forehead of the attacker, although, of course, after such a hit, although not fatal, it was unlikely that the attacker had a desire to take any active actions. Repeatedly there were cases when the attacker, being intoxicated or drugged, simply did not notice the bullet hit of this cartridge. So, unfortunately, this cartridge cannot be called good for self-defense.

The dimensions of this baby are as follows. The total length of the cartridge of the entire 17,4 millimeter, the length of the sleeve 10,7 millimeters. Real bullet diameter 5,66 millimeters. Depending on the bullet and the powder sample, the kinetic energy can vary from 55 to 100 Joule, which is comparable to the kinetic energy of the bullets of domestic traumatic shares, only in this case the bullet is not of rubber, but lead.

What result can be summed up on the Arsenal RS-1 shooting knife? Of course, the very idea and implementation of the design is worthy of respect only. At least, the weapon turned out original. However, there is no practical value to add a gunshot component to the knife. The inability to properly aim even at a distance of 5 meters makes shooting this product very ineffective. Does not add efficiency and ammunition used in this weapon. The most logical use of such weapons would be firing into the air as a warning, however, even in this regard, the .22 Short cartridge is not the most suitable ammunition. If, however, to make a shot at the attacker in self-defense, then it is likely that even after several hits, you will have to use a shooting knife just like a knife. Apart from the fact that a revolver in such an unusual wrapper can be a knife handle, it can be placed practically in the handle of any object, for example, in a case handle. 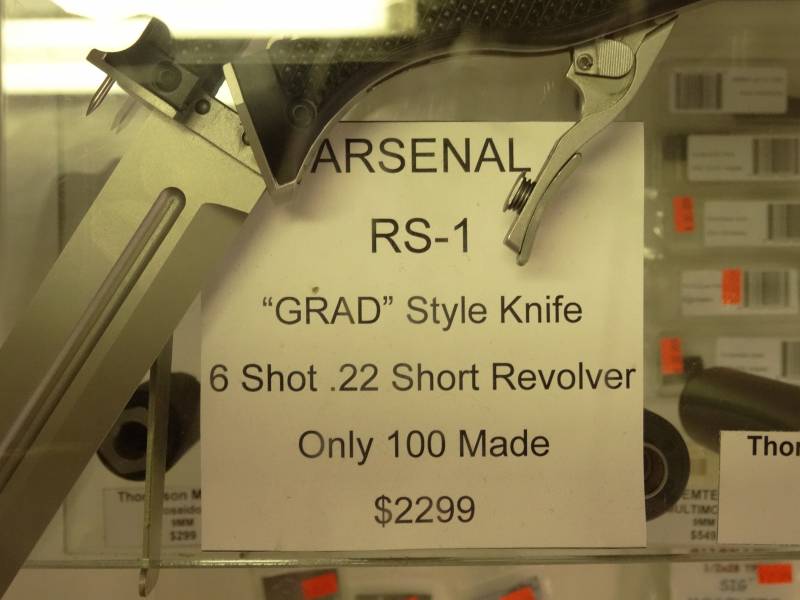 It is worth noting that in most countries where citizens are allowed to carry short-barreled weapons and use them for the same self-defense, a person with a knife, rather than a pistol or a revolver, will cause more questions and attention from law enforcement agencies.