January 31 2018
7
The Chinese amphibian amphibian program, AG600, is nearing completion. It is already clear that the AG600 "Jiaolong" (water dragon) will be the largest of all currently available serial seaplanes. The development of this amphibian aircraft is the Chinese company Aviation Industry Corporation of China. Started back in 2009, the work is estimated at approximately 3 billion yuan. 24 December 2017, the new aircraft made its first flight.


The AG600 amphibious aircraft program officially launched in 2009 (originally, the aircraft carried different designations: JL-600, TA-600 or D-600, the alphanumeric index AG600 was assigned to the aircraft from 2014 of the year). At the same time, according to information from a number of sources, work on a seaplane in the PRC began in the 1980s. According to Chinese media reports, investments in the AG600 creation program from only 2009 have amounted to about 3 billion yuan. Initially, the new plane was supposed to fly into the sky in the 2013 year, but later the dates of its first flight were repeatedly postponed. 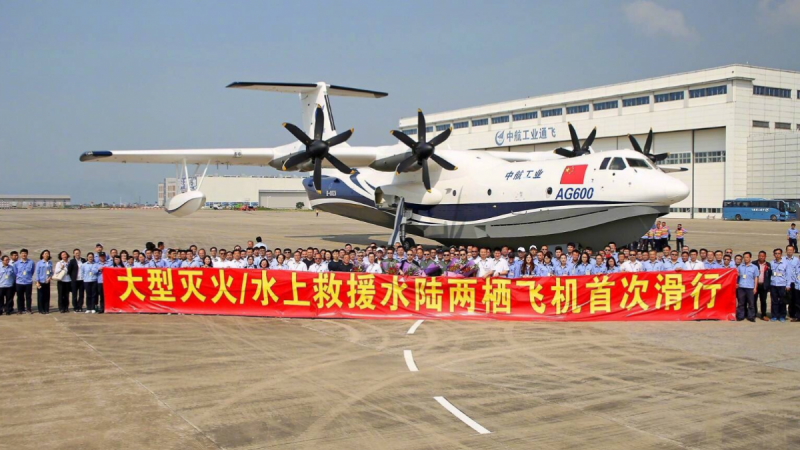 For the construction of experimental and serial amphibious aircraft AG600, the Chinese companies CAIGA and AVIC conducted a complete reconstruction of the enterprise ZYAC, located in the city of Zhuhai. Despite this, the existing production site can only be considered as an assembly site. For the first flight model, the center section, middle and front of the fuselage, as well as the wing were assembled at the Xian Xi'an Aircraft Industry (Group) Company in Xi'an, the fuselage tail section and tail assembly were assembled at the Hanzhong Avic Industry Group Company , and the release of the engine nacelle engaged Chinese company Flying North. This cooperation may continue in the future. In total, the 150 order of various research centers and institutes, as well as 70 Chinese enterprises, were involved in the creation and industrial production of the new Chinese seaplane.

New Chinese seaplane has an impressive size. The maximum length of the "water dragon" is more than 39,3 meters, the wingspan is 39 meters, the stated maximum take-off weight is 53,5 tons (some Chinese sources mentioned the take-off weight up to 60 tons). All of the above makes the AG600 amphibious aircraft the largest modern seaplane in the world (in comparison with the now-produced Be-200, Bombardier CL-415 and ShinMaywa US-2).

At the same time, very soon, AG600 could be shifted from the pedestal by another Soviet development - the multi-purpose amphibian A-40 Albatross (also known as the Be-42). The aircraft was originally designed for military needs, as a replacement for the amphibious Be-12. The project of this seaplane, equipped with turbojet engines, which the Navy planned to use as an anti-submarine, was stopped after the collapse of the USSR. Total was built two copies of this amphibian. Despite the fact that in 1990, it was adopted by the USSR Armed Forces, the A-40 was never produced in series. 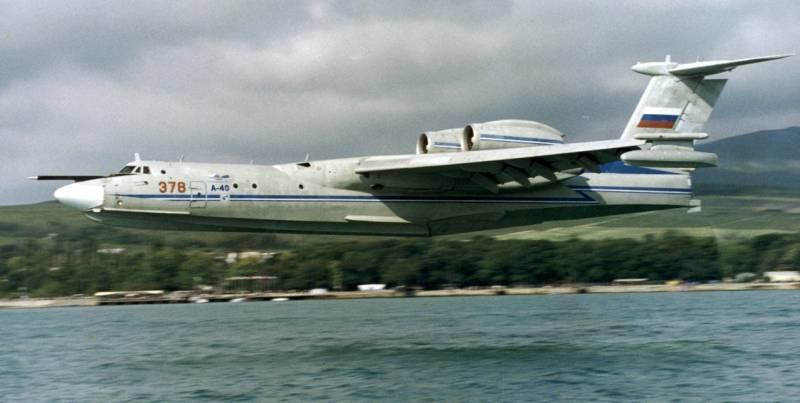 After the collapse of the Soviet Union, both the resumption of production and the complete closure of this program were repeatedly declared. In March 2016, Colonel Gennady Zagonov, who was the head of Morskoy aviation Black Sea fleet The Russian Navy made an official statement according to which by 2020 the Be-12 anti-submarine amphibious aircraft in service with the fleet will be replaced by the A-40. If this happens in reality, the Russian seaplane A-40 will become the largest amphibious aircraft existing today. It will surpass the Chinese "dragon" AG600 in size (length - 45,7 meters, height - 11 m, wingspan - 42,5 meters) and a maximum take-off weight of up to 90 tons.

The first flight of the “water dragon” AG600, which was repeatedly postponed from 2013 of the year, took place as a result of December 24 of 2017. According to the Central Television of China (CCTV), the car was in the air for about one hour. According to the data of the TV channel, it took approximately 600 metro of the runway to set the take-off speed of the new amphibian. During the first test flight, the aircraft rose to a height of 2500-3000 meters, after which it made several maneuvers in the air, including descending and simulating an approach. According to the developers of the amphibious aircraft AG600, the main objective of the first test flight was to check the safety and functioning of the onboard systems.

The Chinese AG600 seaplane has four WJ6 turboprop engines with an 5100 HP take-off capacity each, with six blades propellers. This engine is a Chinese copy of the Soviet AI-20 engine, created back in 1955-57. In China, it is produced by the National South Aviation Industry Company (CNSAIC) in Zhuzhou. The AI-20 engine is famous for its reliability, its different versions could be installed on the military transport An-8 and An-12, anti-submarine IL-38 and amphibious aircraft Be-12. For the first time in the Soviet engine-building on the AI-20, the overhaul life measured in thousands of hours was reached, and the assigned resource of the modification of the AI-20М was 20 thousands of hours. AG600, a manufacturing company, notes that the 100% aircraft consists of Chinese parts, but it did not go without borrowing and copying. 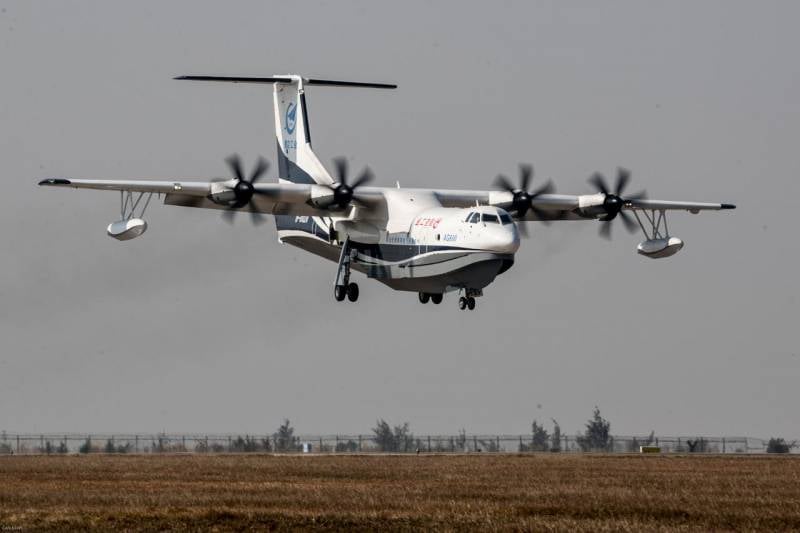 The seaplane developed by engineers of the Chinese Aircraft Corporation was originally designed for the needs of civil aviation. At present, it is known about the development of two main modifications of the AG600 seaplane - a search and rescue option (capable of taking on board up to 50 people) and a fire-fighting one designed to fight large forest fires (capable of taking up to 12 tons of water in 12 seconds). In the future, it is possible to create other modifications of the amphibian, including in the interests of the Chinese military. The manufacturer has already announced that there are orders for 17 machines on the plane from Chinese customers. In this case, the details and value of contracts are not disclosed.

The maritime aviation of the People’s Liberation Army of China can use the aircraft to protect Beijing’s interests at sea, for example, when conducting patrol operations in disputed areas of the South China Sea. Currently, China is carrying out large-scale work on the artificial transformation of reefs in the South China Sea into islands. Thus, Beijing expects to declare them part of its sovereign territory, around which, within the 200 radius of miles, the exclusive economic zone of China will extend. Other states in the region are extremely sensitive to this policy of China, challenging the validity of these actions. Official Beijing considers almost all the islands, cliffs and reefs in the South China Sea as its sovereign territory, with which Brunei, Vietnam, Indonesia, Malaysia, Taiwan and the Philippines do not agree. The position of these countries in a dispute with China openly support the United States.

Taking into account the policy pursued by China today in relation to the islands in the South China Sea, it is quite possible to use AG600 for military purposes in the future. After the corresponding minor alterations, the amphibian can be used as an anti-submarine or patrol aircraft, the ability of the aircraft to be in the sky for up to 12 hours is useful. It can also be effectively used for the transfer of military cargo and military personnel to remote bases or small islands that do not have full-fledged runways. 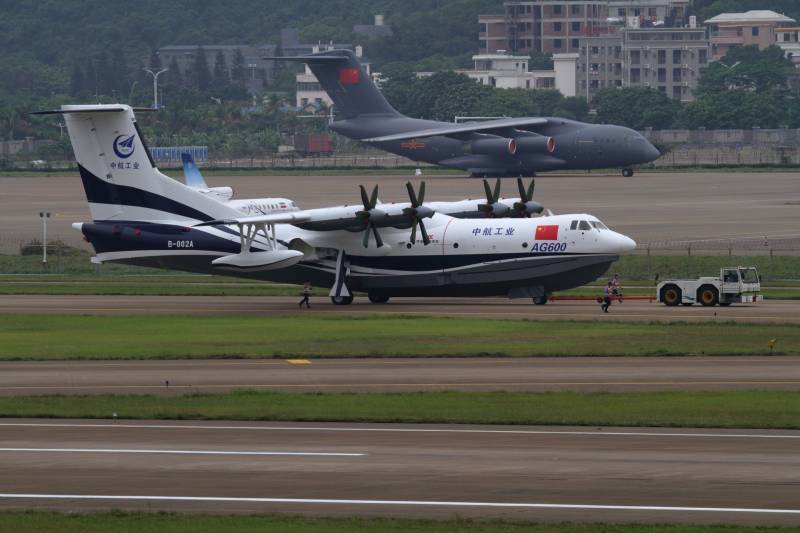 AG600 for some time may retain the title of the world's largest seaplane, however, he and the Soviet / Russian amphibian A-40 are significantly inferior in size to the famous seaplane of the American billionaire Howard Hughes, who, realizing his dream, built Hughes H-4 Hercules. This seaplane went into history nicknamed “Spruce Goose” (although in reality it was made mostly of birch plywood). The wingspan of his wings reached the 97,54 meter. True, the Fir Goose took to the air only once, having completed the first and the last in its history flight of about half a minute. Since then, he has not risen to the sky, finding refuge in a museum in Oregon.