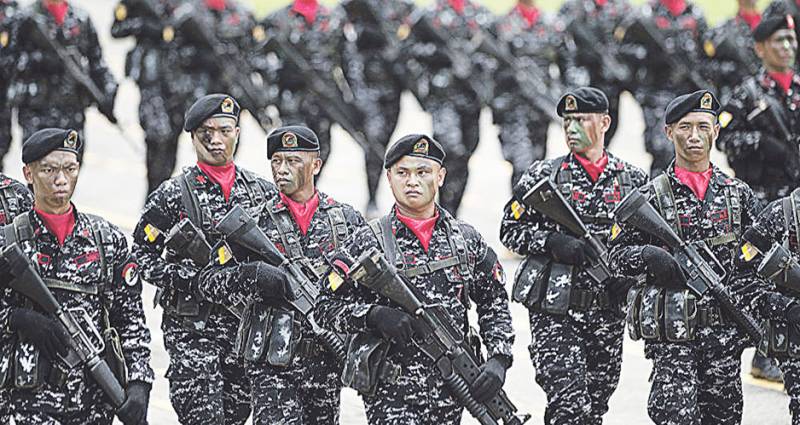 Having received official independence from the United States immediately after World War II, the Philippines retained a very close relationship with the former metropolis, including in the military field. Most of the aircraft technology is American-made. Although there were deliveries from Europe, Australia, Israel. Recently, military-technical cooperation with the Republic of Korea has been actively developing.

In the Philippines, there were two of the largest US military bases outside the United States — the Clark Field air force and the Subic Bay naval base, but both were eliminated at the start of the 90's. The country is one of the most active participants in the dispute over the Spratly Islands and the surrounding waters.

Being in Southeast Asia, the Philippines for a number of signs have significant similarities with the countries of Latin America. We are talking about an unconditional orientation to the United States, Catholicism as the dominant religion, a very high level of corruption and crime, and a very peculiar structure of the armed forces. The Philippine armed forces are large in number, but they are focused exclusively on counterguerrilla operations and have accumulated good experience in this area.

At the same time, the army is completely unprepared for a classical war, since it does not have the equipment for this. The sun has no major tanks, Self-propelled guns, MLRS, full-fledged combat helicopters, ground-based air defense systems, submarines, ships and boats with any missile weapons. Available equipment of other classes, as a rule, is very outdated, its quantity is insignificant.

As it was said, the ships and boats of the Philippine Navy do not have any missile weapons, even short-range air defense systems.

In June, 2016-th Manila won a case against Beijing in the Hague Arbitration regarding the ownership of a number of islands and reefs in the South China Sea, but the opponent ignored this decision as expected. On the southern island of Mindanao, the war against Islamic radicals has been going on for many years, and in 2014 they swore to the banned in our country IG. In the event of the complete elimination of the bases of terrorists in Iraq and Syria, a significant part of the surviving militants will move to Southeast Asia, primarily to Mindanao. The 2017 battles against the caliphate militants outside the city of Maravi, which continued from May to October, although formally won by the Philippine army, showed that its potential was extremely limited.

Today, the PLA Navy without any problems can organize a large-scale landing on the Philippines. Paradoxically, it would be much easier for the Chinese than to go to Taiwan. But his Armed Forces are much stronger than the Philippine army, moreover, initially focused on repelling such aggression.

As the experience of the last decade shows, hopes for a military alliance with the United States have become suicidal for a number of countries and non-state actors (Georgia, Ukraine, the Syrian “opposition”). Apparently, in the near future the Kurds, and then Taiwan will replenish this series, since Washington’s gigantic military power is formal. Comparable opponents are too tough for him. In these cases, he was not ready for war with Russia, and also obviously not capable of armed confrontation with China. The United States can deliberately expose the Allies under attack without rendering them any real help.

Apparently, the new Filipino President Duterte made certain conclusions from these facts and began a significant diversification of foreign policy. It is worth noting that so many modern national leaders are still incapable of such awareness, continuing to believe that the alliance with the US guarantees them something.

The impossibility of the military confrontation of the PRC and the interest in economic cooperation with this country force Duthert to come to a substantial rapprochement with Beijing. At the same time, the Philippine president is not ready for a complete break with the United States due to the presence of too close ties in the economic and military fields, as well as the need for insurance against the influence of China. And in order not to be sandwiched between the two giants, Duterte will strengthen ties with other centers of power. Russia should be an additional argument against the United States, Japan - a counterweight to China.

In general, we can say that Duterte, to a certain extent, changed the geopolitical situation in Southeast Asia. However, Manila’s influence is limited due to its low economic, political and military potential. Coupled with internal instability, this automatically reduces the value of the Philippines as a potential ally for major powers. In particular, for Russia, the country will obviously remain on the far periphery of interests, although in words Moscow will in every way welcome rapprochement with Manila. For the United States and for the close neighbors of the Philippines, interest in this country will be somewhat higher, but it will not be in the center of their attention unless the new “Islamic Caliphate” emerges in the Philippines. However, this option is hardly needed by Manila itself.

Ctrl Enter
Noticed oshЫbku Highlight text and press. Ctrl + Enter
We are
PLA operation to expel the US Navy from the South China Sea. Biendong Area A2 / AD Details (part of 1)Air shield of the Green Continent. "Through hardship to the stars"
17 comments
Information
Dear reader, to leave comments on the publication, you must to register.