The National Interest: Russia may have the perfect weapon to destroy the attacking “packs”

January 23 2018
46
In early January, Russian troops prevented a terrorist attack on Hmeymim airbase. These events clearly showed the potential of the Russian air defense - both its individual components and the system as a whole. As was to be expected, the incident in Syria attracted the attention of domestic and foreign experts who tried to draw conclusions about the current state of affairs and the future of Russian air defense systems.


20 in January, the American edition of The National Interest published in the The Buzz column an ​​article “Russia Just Might Have the Perfect Weapon to Crush 'Swarm' Attacks” (“Russia can have the perfect weapon to destroy the attacking "packs"). Publication by Sebastian Robblin was attributed to the topics “Security” and “Middle East”. As follows from the title, the subject of the article was modern anti-aircraft complexes, which were proposed to be considered in the light of the events of early January in the area of ​​Hamim base. 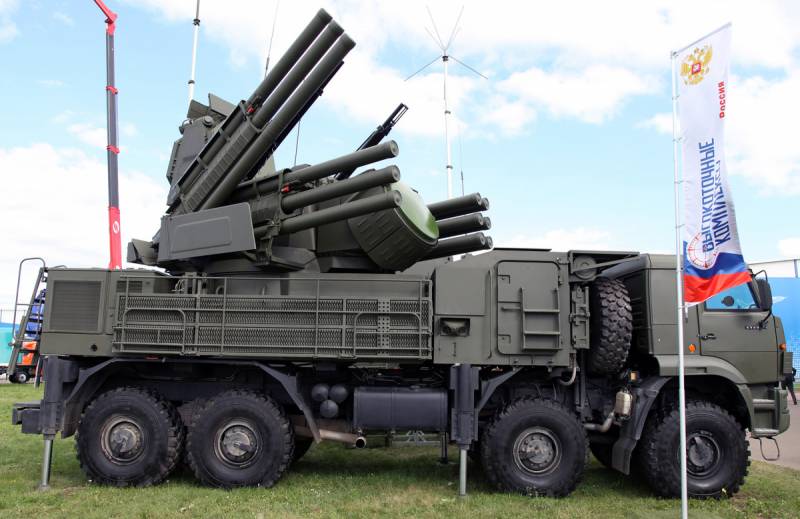 The author begins his article with a reminder of the events of the recent past. So, on January 6, Russian radar stations in Syrian Latakia discovered at least 13 unmanned aerial vehicles in the air. 10 such drones equipped with a combat load in the form of explosives were sent to aviation base Hmeimim. Three more vehicles were supposed to attack Russian targets in the port of Tartus. Just a week before this, Khmeimim airbase was subjected to mortar fire, which killed two people and possibly damaged planes.

As reported by Moscow, the available means of electronic reconnaissance and electronic warfare took control of six detected drones. The remaining seven vehicles were shot down by the Pantsir-C1 anti-aircraft systems carrying guided missiles and automatic cannons.

S. Robin recalls a poster shown by Russian armed forces during one of last year’s events. It showed the results of Russian air defense operations in Syria from March to July 2017. Among other things, during this period, the Russian Pantsir anti-aircraft missile gun systems were able to shoot down Turkish Bayraktar-type UAVs, one Israeli model Heron and three American-made RQ-21A Integrator. Three cases of missile interception were also indicated. For obvious reasons, the “summer” poster did not include data on the latest shelling of Russian bases.

The author of The National Interest reminds that, according to the popular version, it was the Pantsir-С1 ZRPK in 2012 that the Turkish reconnaissance aircraft RF-4 Phantom shot down in 2015. At the same time, however, a successful attack of the aircraft could be performed by another system, which is distinguished by a large radius of action. According to some sources, the Pantsiri were also seen in the spring of XNUMX of the year in the territories of Donbass controlled by the “pro-Russian separatists”.

Complex "Pantsir" (the author offers versions of translation into English "Armor" and "Carapace") in NATO received the code designation SA-22 Greyhound. This system is a continuation of the line of air defense systems created during the Soviet era. A similar technique was intended to protect tank battalions on the march and on the offensive from air attacks. The first example of this line was the ZSU-23-4 "Shilka" anti-aircraft self-propelled gun, built on the chassis of the PT-76 amphibious tank.

Unlike the previous self-propelled anti-aircraft systems of the Soviet army, the Shilka had an airborne radar for searching for targets and targeting weapons. The armament consisted of four 23 mm automatic cannons capable of attacking low-flying aircraft and helicopters. As an example of the high efficiency of “Shilka”, S. Robin cites one of the episodes of the Arab-Israeli Doomsday War. During one of the battles, the Israeli Phantom aircraft were supposed to suppress Egyptian air defense. She met the enemy with dense fire from the ZSU-23-4 guns. Three low-flying aircraft were shot down, two more were seriously damaged.

The author recalls that the Shilki are still in service with many countries, but the Soviet army began to replace them in the eighties. To replace the existing machines were built more advanced self-propelled 2K11 "Tunguska" (NATO designation - SA-19 Grison). To increase firepower and combat effectiveness, four 23-mm guns were replaced with a pair of 30-mm guns. The combat radius of the machine was increased by the use of ground-to-air guided missiles. During the creation of the Tunguska system, it was believed that such weapons would protect the troops from the attack of American attack aircraft A-10 or attack helicopters AH-64 Apache.

In the nineties, Russian industry began work on a successor for the existing Tunguska. First of all, it was decided to abandon the tracked armored chassis in favor of the wheeled vehicle of high maneuverability. The combat module now had to carry 12 guided missiles. S. Roblin notes the difference in the approaches used in the two projects. Thus, the anti-aircraft self-propelled gun 2K11 "Tunguska" was intended to accompany tanks on rough terrain, including at the front edge. The main idea of ​​the new project was to create a relatively cheap combat vehicle, characterized by greater mobility on the road network. This would allow quick and easy deployment of “point protection” of objects in the rear.

The first prototype ZRPK "Pantsir" was created in the 1995 year, and since then the machine has undergone major changes. Different chassis were used, radio-electronic systems were being developed, etc. The most common at the moment serial version of the complex is built on a four-wheel wheeled chassis "KAMAZ-6560" and is operated by a crew of three people. "Pantsir-С1" is able to work both independently and as part of the battery. Perhaps the centralized management of multiple complexes from a single command post. Also, interacting with more powerful radar, mobile anti-aircraft systems can work with external targeting.

The Pantsir complex is capable of detecting air targets at distances of about 22 miles (35 km), for which search radar with passive phased antenna array is used. Next comes the second locator, designed to accompany the targets. Automatic target tracking starts at distances around 15 miles (24 km). The complex also has a set of optical-electronic equipment, which includes thermal imaging equipment. Optics allows you to find and accompany targets in a difficult jamming environment.

After generating the data for firing, the ZRPK Pantsir-С1 can launch up to four missiles at intervals of 1,5 with. These missiles can be aimed at one, two or three targets. The ammunition complex consists of a dozen missiles with a range of up to 12 miles (19 km). The height of the attacked target is from zero to 50 thousand feet (more than 15 km). The 57EX6 missiles do not have their own means of guidance, but they constantly receive commands from the side of the combat vehicle. The rocket reaches a speed of about M = 3. The probability of hitting a target with one rocket is about 70%. 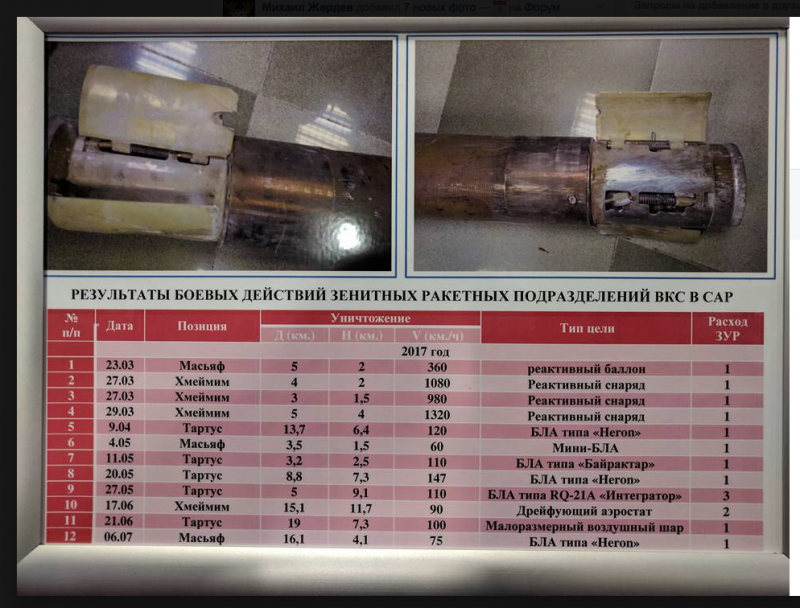 If the missiles fail to hit the target, a complex with a combined weapon can use automatic cannons. Two 30-mm automatic guns of type 2А38М are mounted on the “Pantsir” pivoting tower. Each of them is able to do up to 40 shots per second - many times more than a number of similar systems. With the help of artillery, an anti-aircraft complex can shoot down planes and helicopters at distances up to 2 miles (more than 3 km).

S. Roblin points out that the Pantsir PIRM in Syria attracted less attention than long-range systems such as the C-400. The reasons for this are simple: it is difficult to get into the zone of responsibility of a short-range complex covered by a system with higher characteristics. However, the Pantsiri are the “lowest level” in the integrated air defense system, which also includes long-range and high-altitude complexes. In such a system, the Pantsir is the last line of defense, and is also a defense against low-flying aircraft, missiles, drones, or even missiles.

Such opportunities in the light of the characteristics of modern conflicts are crucial. It was reported that during the tests of the 2012, the Pantsir-C1 complex was able to shoot down a conventional enemy cruise missile. In later tests, the target developed speed at the level of M = 3, but this did not save it from defeat.

The author of The National Interest recalls that integrated air defense systems are not fundamentally invincible; they can be disabled by ensuring the free operation of strike aviation in a given area. For this, in the first place, the coordinated use of high-precision missiles and bombs is necessary. However, to solve this problem requires special planning, a fairly long time and very expensive weapons with its carriers. During a high intensity conflict, the attacking side may not be able to “pierce” the enemy’s air defenses. Cruise missiles can also not give the desired result, since they will become targets for small and near radius complexes.

To date, Pantsir ZRPK has managed to show not the most outstanding export success. According to S. Roblin, the reason for this can be the very high price of combat vehicles - 13-15 million US dollars. Total exported went to fifty complexes. They traveled to Algeria, Iraq, Syria, the United Arab Emirates and Jordan. About hundreds of cars received the Russian armed forces. In the future, the naval version of the missile-gun complex will be installed on the aircraft carrier Admiral Kuznetsov.

In 2015, a new anti-aircraft complex called “Pantsir-С2” appeared. It differs from the predecessors of a more powerful radar capable of detecting targets at distances up to 25 miles (40 km), and also carries 57-6-E missiles with a range of 18 miles (29 km). The Pantsir-SA complex, adapted to the harsh conditions of the Arctic, was also developed. It is built on the basis of an articulated tracked carrier and is devoid of cannons, instead of which it carries six additional missiles. Such a combat vehicle is capable of operating at temperatures as low as -50 ° C. The development of a promising complex "Pantsir-SM." It is argued that he will be able to intercept even ballistic missiles - outstanding opportunities for a short-range anti-aircraft system.

The author of the American edition is compelled to note that the armed forces of the United States do not have a small radius air defense system, similar to the Russian "Armor". This is due to the fact that the army relies on the actions of the air force. Combat aircraft must gain air superiority and protect ground units from enemy strikes. The Russian command, in turn, believes that its troops will be constantly subjected to air strikes. It is for this reason that the army needs a large number of various air defense systems.

S. Roblin points out that air superiority may not be obtained at the crucial early stage of a full-scale conflict. In addition, the importance of near-air defense is vividly illustrated by recent events in Syria. During the current conflict, American fighters had to shoot down enemy's UAVs several times, but their fuel and missiles were likely to be much more expensive than the targets destroyed. To counter the massive attack of the “flock” of drones, you will need several aircraft, which will lead to a clear increase in fuel and ammunition consumption.

The recent mass attack of unmanned aerial vehicles on the Russian bases in Syria is currently the largest event of this kind. In addition, as the American author believes, it can be a harbinger of new massive strikes using remotely controlled or autonomous equipment.


The article "Russia Just Might Have The Perfect Weapon To Crush 'Swarm' Attacks":
http://nationalinterest.org/blog/the-buzz/russia-just-might-have-the-perfect-weapon-crush-swarm-24144

Ctrl Enter
Noticed oshЫbku Highlight text and press. Ctrl + Enter
We are
About the future of underwater roboticsAn-12 in Afghanistan
46 comments
Information
Dear reader, to leave comments on the publication, you must to register.