US rifles 416 NK, which are afraid of dust and frost 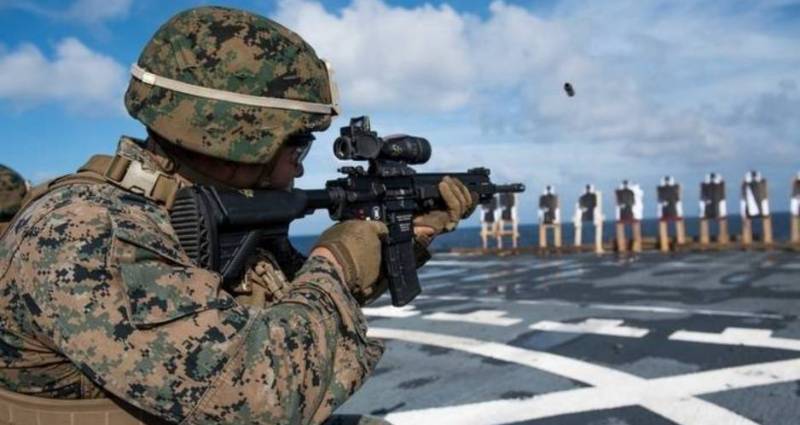 The question of replacing the individual weapons in the US Armed Forces has been quite acute since the 90s of the last century. According to the US military, assault rifles, created on the platform M-16 \ AR-15, no longer meet all the requirements of modern warfare, and the system itself has almost exhausted the possibilities of modernization.

It was announced several contests to replace the rifle, but they all ended in nothing. The latter, Interim Combat Service Rifle, was completed early this fall by the US Department of Defense.

And recently it became known that the Marine Corps (ILC) of the USA finally made a choice in favor of the favorite of the untimely completed program - the German rifle 416 (in the American designation М27 Infantry Automatic Rifles (IAR)). Recall that the US KMP is not subordinate to the Ministry of Defense, but directly to the President of the United States, and decides on weapons issues independently.

Be that as it may, the M27 rifle has successfully passed all tests under the ILC program, and in August last year, the US ILC announced its intention to purchase more than 50 units. The notice of intent indicated that 000 M50 Infantry Automatic Rifles (IAR) produced by the German company Heckler & Koch will be purchased for the Marines. And in early 814, it became known that the USMC officially announced the start of the rearmament process.

Note that Heckler & Koch has been fighting for the American arms market for a long time. At the end of the last century, this German company opened its American branch - Heckler & Koch Inc., which in January 1994 mastered the production of .45 (11,43-mm) Heckler & Koch USР.45 pistols ordered by the command of the US Special Operations Forces. ...

The American branch actively participated in all the competitions mentioned above. Actually, 416, which is now well known in the world and used by the security forces of several countries, owes its appearance to the efforts of German gunsmiths to establish themselves in the American market.

This insistence is understandable. Indeed, in addition to the fact that the American numerous armed forces themselves represent an extensive sales market, the United States is the leader of the Western world, and therefore American military standards almost automatically apply to countries in their sphere of influence. So Heckler & Koch with ILC weapons literally hit the jackpot.

Initially, the HK416 rifle was positioned not as an independent weapon, but as a replacement tool for the M-16 family, which increased the reliability of the design. In it, unlike the basic design, instead of a gas tube, a rod is used, pushed by a piston with a short stroke (as in SVT). This rod, in turn, pushes the standard bolt.

It must be said that this construction is neither unique nor revolutionary. Options AR-15 with a short stroke of the piston were considered in the 60-s of the last century, but did not receive distribution.

Be that as it may, the NK 2005 went to the market in 416, not as a replaceable module, but as an independent carbine. Moreover, Heckler und Koch advertisers claim that the gunsmiths of the company were able in their offspring to combine accuracy and ergonomics of the M 4 and the reliability of the AK. However, if the first part of the statement is valid, then the reliability level of the NK 416, surpassing the M-16, does not fall short of not only the Kalashnikov machine gun, but also the FN FNC, FN SCAR, or Sig Sauer 550. In particular, Norwegian special forces complain about system failures at low temperatures. The reliability of NK 416 in comparison with М4 and in conditions of high dustiness has not increased too. So when conducted by American scientists in the 2007 test year at a test station in Maryland, the rifle gave the 233 a failure on the 6 thousand shots. Given that the ability of the device to conduct automatic fire has increased in comparison with the M4, failures during intensive shooting and overheating, it is not uncommon in this system.

To this we can add that the gunsmiths, trying to ease the construction as much as possible, according to experts, were too carried away with the use of aluminum alloys, which, of course, did not contribute to an increase in structural strength.

Resource rifle manufacturers have designated in 20 000 shots, which is two thousand more than the capabilities of the M4.

In other words, the NK416 is a good rifle, with improved, in comparison with the M4, characteristics, of which it is, in fact, another modernization. However, if we consider that the novelty is several times more expensive than its predecessor, the expediency of such a replacement is in doubt.

It is noteworthy that the Germans themselves are rearming the 433 NC - a cheaper and more efficient model.
There are very serious reasons to assume that the choice of the USCM leadership is not so much connected with the technical perfection of the creation of Heckler und Koch, but with effective, so to speak, product promotion.

The marketing ploy, which looks like a scam, was as follows. The company handed over to American special forces from Delta, units of the Joint Special Operations Command, the antiterrorist group for conducting asymmetrical combat operations and sealed rifles for free, so that they maximize their promotion. Then, through lobbyists, they organized a discussion in parliament on the topic: “why the special forces are armed with the newest rifles with the best in the world, and the usual GIs are forced to fight the outdated M-4”. But since the “marketers” failed to properly interest the officials from the Pentagon’s weapons department (they were probably greedy), the program of the Ministry of Defense, possibly “sharpened” under this rifle, was discontinued. But in the Marine Corps Heckler und Koch has achieved success.