The most powerful small arms. Part of 2. Submachine gun UMP45 chambered for .45 ACP

January 12 2018
42
UMP submachine gun (Universal Machinen Pistole) produced by the famous German armory company Heckler & Koch might not have been included in the rating of the most powerful small arms, if it were not produced under cartridges of various calibers. The most powerful version of this universal UMP45 submachine gun is chambered for .45 ACP (11,43x23 mm). This model of firearms combines high stopping action of a bullet, moderate recoil and high accuracy of fire. Unlike a pistol Desert Eagle, the UMP submachine gun, even in its modification chambered for a fairly powerful .45 ACP cartridge, is used by special forces and army units of some countries, and its younger brothers chambered for 9 × 19 mm Parabellum or .40S & W (10x22 mm) are even more widespread.


Engineers at Heckler & Koch created the UMP versatile submachine gun in the 1990s as a complement to the HK MP5 family of submachine guns that are popular and renowned around the world. The design of the new model was simplified, but at the same time more modern materials were used in the construction of the UMP. The company originally planned to offer its model on the police weapons market in the United States, so it chose the .40S & W and .45 ACP ammunition for it, popular in America, the version of the submachine gun chambered for 9x19 mm Parabellum appeared later.

Currently, there are three varieties of the UMP submachine gun: the most powerful UMP45, designed for the .45 ACP pistol cartridge, the UMP40, respectively, for the .40S & W cartridge and the UMP9 for the 9 × 19 mm Parabellum cartridge. Despite the difference in the caliber of the weapon, all three submachine guns have the same design, the external difference between the three models from each other lies only in the shape of the store. For submachine guns in large calibers - a straight magazine, for a 9x19 mm Parabellum cartridge - curved. All three versions can, if desired, be easily transformed into each other by replacing the barrel, bolt and magazine; during development, the Germans implemented the modular design of the submachine gun. 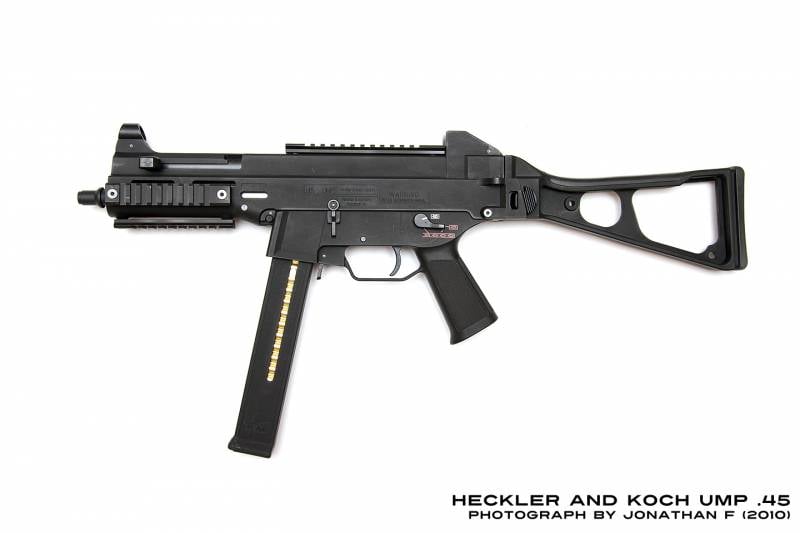 In addition to the three listed versions, one civilian is also represented on the market - this is USC (Universal Self-loading Carbine) - a universal self-loading carbine. It was designed specifically for further export to the United States and complied with all American standards of civilian weapons. The carabiner differs from its combat counterparts in the form of a butt, a longer barrel, a magazine restriction on 10 cartridges (at the time of development in the US, there were restrictions on the capacity of stores for civilian weapons), while USC stores are not compatible with combat versions, and the carbine does not have a pistol grip fire control and there is no possibility to conduct automatic fire. This civilian version can be used for sporting purposes or for self-defense. USC carbine sales were discontinued in 2013.

It is worth noting that the designers of Heckler & Koch took almost six months to create a submachine gun capable of firing bursts of cartridges of such a large caliber as .45APC. Initially, they tested the same semi-breechblock scheme that was implemented in their MP5 submachine gun and was traditional for the company. However, this scheme could not withstand the long-term operation of the weapon, as a result of which the new submachine gun was out of order after 5 thousand shots. As a result, the engineers of the German company switched to a free gate circuit.

The German submachine gun HK UMP45 is a small arms, built according to the scheme with a free gate. The principle of operation of the automation is used - the release of the free shutter, the fire from a submachine gun is conducted from the closed shutter. Trigger mechanism - trigger. The weapon has a double-sided fuse-switch fire modes, as well as a slide delay, which stops the shutter in the open position after all the cartridges are used up in the magazine. The following fire modes are available to the arrow: single shots, automatic fire, shooting can also be optionally available in bursts with a cut-off of an 2 or 3 shot. Since the UMP submachine gun was originally created for firing large-caliber cartridges, as well as due to difficulties in feeding .45 ACP cartridges compared to conventional 9x19 mm, the technical rate of fire was artificially limited to 600 rounds per minute, which makes this submachine gun one of the “slowest” in the international market. 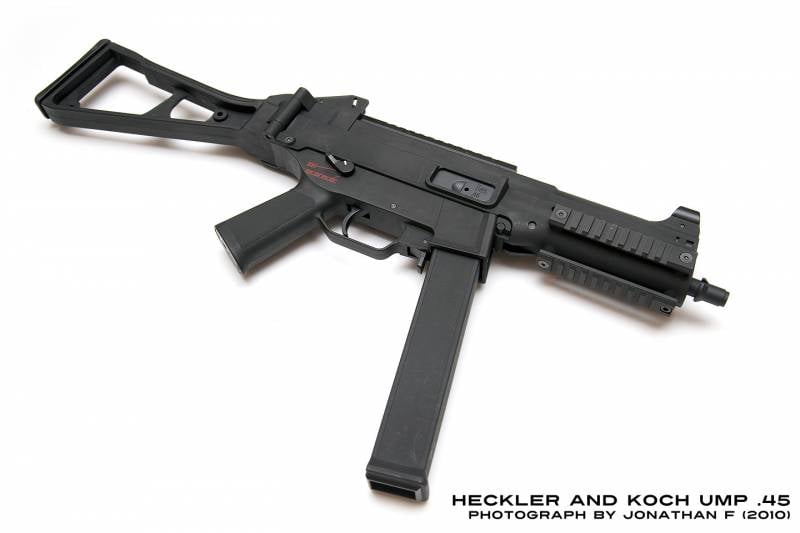 The pistol grip of the UMP45 has a rounded shape and small notches along the cheeks and back plate, there is a small protrusion under the little finger of the shooter at its base for a more comfortable hold in the hand. The trigger guard is large, it is possible to shoot from a submachine gun in gloves or to hold a weapon, passing the thumb of your left hand through the bracket (as in the Beretta 93R). The latch of the store is straight, as in the Kalashnikov machine gun, it is made of metal and has a deep groove, the stroke is short and clear, and the magazine is not removed from the weapon, but drops out like a pistol.

The switch of fire modes is two-sided, reversible (the lever is directed towards the butt of the submachine gun), it has three positions:
- the extreme upper position - blocking the striker and the trigger, while the trigger is still pressed;
- middle position - fire by single shots;
- the lowest position - automatic fire, the inclusion occurs with a slight click. 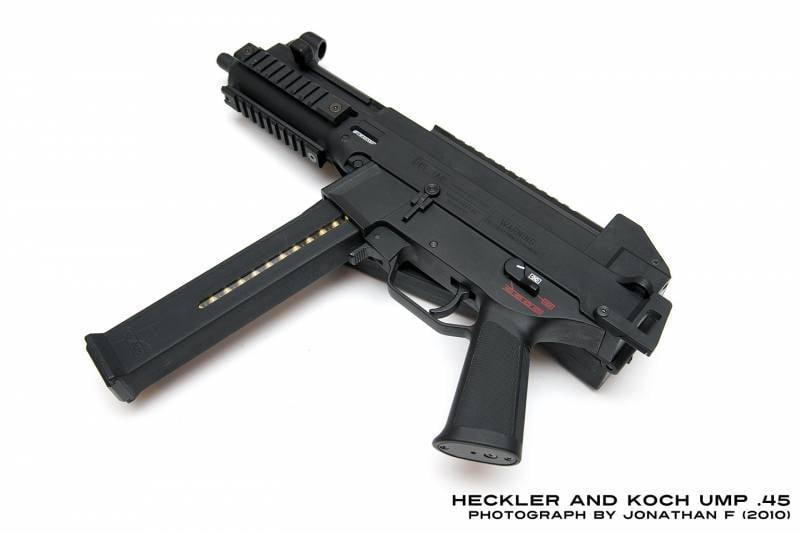 In the submachine gun there is the possibility of replacing a fully automatic fire mode on the firing in short bursts of 2 or 3 cartridge. For such a replacement, you need to change the pick-up lever or install another firing mechanism on the weapon. This module is fixed on the weapon with the help of two "canines", which are in front of the receiver of the store, and a long bolt connecting it with the receiver and located behind the translator of fire modes.

On the UMP45, a butt that folds to the right side is used (someone thinks this option is more convenient than on MP5), it can be fixed in the tilted position. The folding skeleton type butt with two cut-outs of the UMP45 submachine gun, unlike the receiver, is reinforced and has an aluminum frame, which significantly increases its strength. True, given that the butt fixation elements are made of plastic, they should be beaten on with some caution. With the butt folded down, the length of the UMP45 is 695 mm, with the folded - 455 mm.

On the upper part of the receiver UMP45 are sights, which are used as a normal rear sight and front sight. Rear sight on both sides reliably protected by the projections of the receiver. This is important when working in cramped spaces and in urban areas, when a weapon may accidentally strike against an obstacle. Rear sight also placed in a protective ring. Between the sights on top of the receiver can be installed Picatinny guide rail, which allows the shooter to install various optical or collimator sights. In total, it is possible to mount four Picatinny strips on a submachine gun - on the bolt box at the top, right, left and bottom of the case. The ability to install a vertical front grip on the UMP can greatly assist the shooter when firing automatic fire from a weapon. 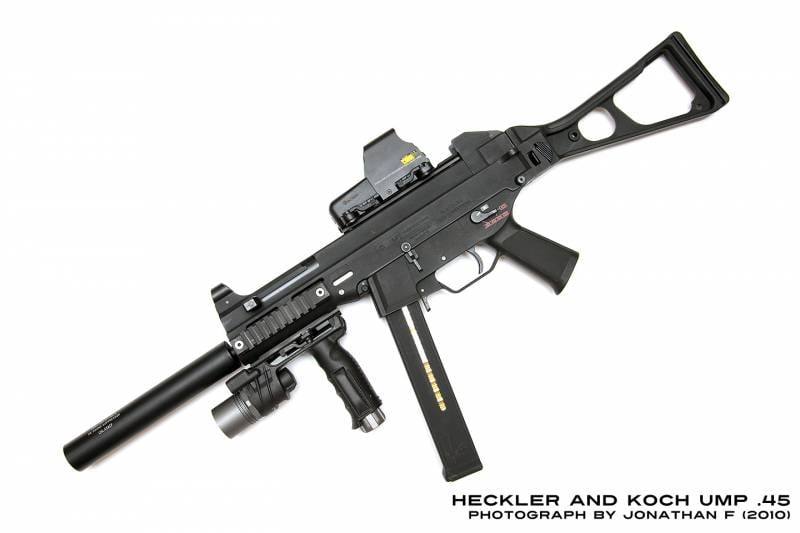 The barrel of a submachine gun is devoid of any compensators in its muzzle, but it also has a mount for a device for silent and flameless firing. The greatest efficiency is ensured when using such a device with subsonic cartridges. The standard barrel length of all three models of the UMP submachine gun is 200 mm, the USC civilian carbine had a barrel length 400 mm.

Together with a submachine gun, straight-shaped box magazines for .45APC and .40S & W cartridges and forward curved for 9x19 mm Parabellum cartridges could be used. Magazine capacity chambered for .40S & W and 9x19 mm is 30 rounds, magazine capacity chambered for .45APC is 25 rounds. Like the receiver, the magazines of the submachine gun are made of plastic. On their sidewalls there are special slots covered with transparent plastic. These slots are used for convenient control of ammunition consumption. 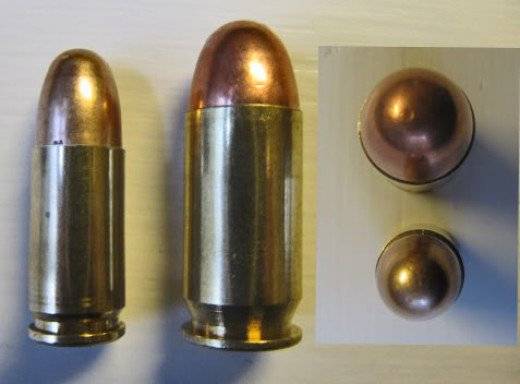 Comparison of 9x19 mm and .45APC cartridges
In general, it can be noted that all UMP submachine guns are excellent for fighting in urban environments or in buildings, including in cramped spaces. The weapon is distinguished by its low weight and dimensions, as well as the arrow provides ample opportunities for upgrades and installation of various tactical body kit. The modularity of the weapon and the ability to change the caliber also should not be discounted. Option UMP45 is a very powerful firearm, especially in the class of submachine guns. The .45ACP bullet (11,43x23 of a millimeter) has a very strong stopping effect (albeit a small punching action), and now imagine that a whole line of such bullets is flying towards the target. The version of the submachine gun for this cartridge, according to Wikipedia, is used by the special forces of Lithuania and Georgia, and the UMP45 is also used by the special forces of Malaysia, the Philippines and Egypt.

Ctrl Enter
Noticed oshЫbku Highlight text and press. Ctrl + Enter
We are
Small arms: new models and new contractsArmament special forces. Overview of technology and products from a Western specialist (part of 1 from 2)
42 comments
Information
Dear reader, to leave comments on the publication, you must to register.