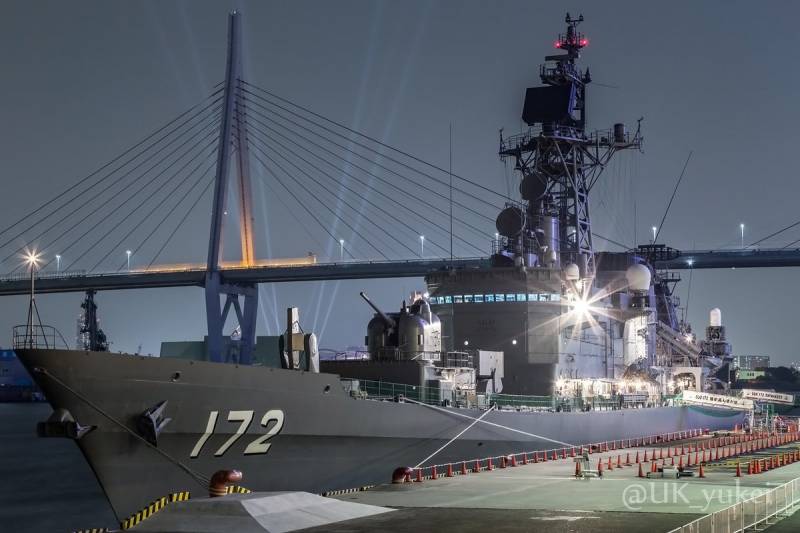 Last fall, the second Asahi-class destroyer was launched in Nagasaki. The ship received the name "Siranuhi" ("sea glow" - an unexplored optical phenomenon observed off the coast of Japan).

Meanwhile, the head “Asahi”, launched in 2016, is already completing the test cycle. The entry ceremony is scheduled for March 2018.

On the part of the Japanese self-defense forces, only brief information was announced regarding the assignment of the new destroyers: the Asahi and Siranuhi (type 25DD) have enhanced anti-submarine capabilities.

The hull is identical to the previous 19DD “Akizuki” series. External differences have a superstructure, where a new radar with receiving and transmitting modules of gallium nitride is placed (instead of the previously used silicon). Instead of a copy of the American AN / SQQ-89, on the destroyers 25DD a sonar complex of its own design is installed. For economic reasons, the Asahi’s ammunition load has been halved (from 32 to 16 ATC). The destroyer is equipped with a gas turbine power plant with electric transmission.

Here, perhaps, is all that is reliably known about the warships of the sons of Amaterasu. 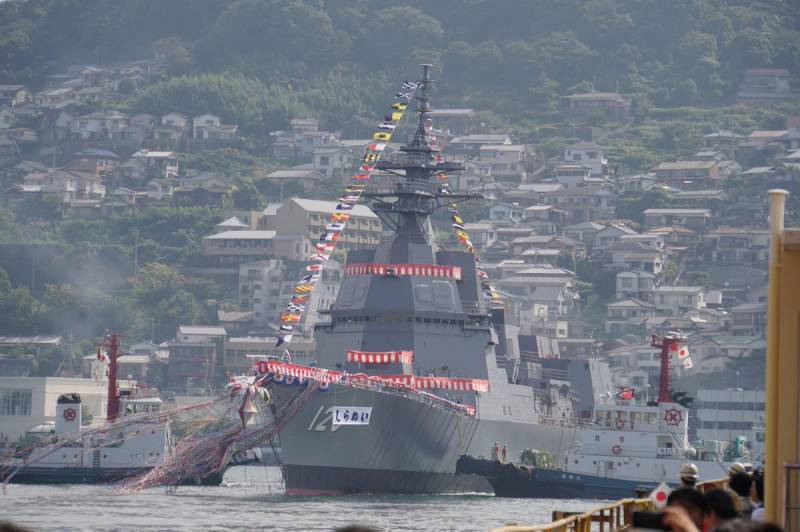 “Siranuhi” completes the era in stories Japanese fleet. The following projects: a promising destroyer (33DD) and an escort frigate (30DEX) created to work with it in pair will change the appearance of the Japanese Navy. A grouped silhouette, a single “octahedron” of the superstructure with integrated antenna devices and a composite case. However, I would not attach much importance to this information: the launch of the head 33DD is planned for the year 2024. Given the paranoid secrecy traditional for Japanese around priority projects, it is not possible to describe the exact appearance of the 33DD destroyer.

Returning to the “Siranuhi” and “Asahi”: over the past three decades, the Japanese ships were built in accordance with a strict concept. At the head of combat groups are large destroyers with the Aegis system (6 units), focused on accomplishing missile defense tasks and intercepting targets at the boundary of the atmosphere and space. Around the "flagships" built a dense ring of escort from 20 destroyers, designed in Japan.

While maintaining the overall layout and features of the American Arly Berkov, Japanese projects are smaller, but they have a richer set and increased efficiency in solving defensive tasks. For example, the Japanese were the first to introduce a radar with AFAR on a warship (OPS-24 system on the destroyer Hamagiri, 1990 year).

To counter the threats from high-speed low-flying missiles (together with the Netherlands), the FCS-3 radar complex with eight active phased antennas was created. Four - to detect and track targets. Four more - for targeting their own anti-aircraft missiles.

To date - one of the best systems for this purpose. 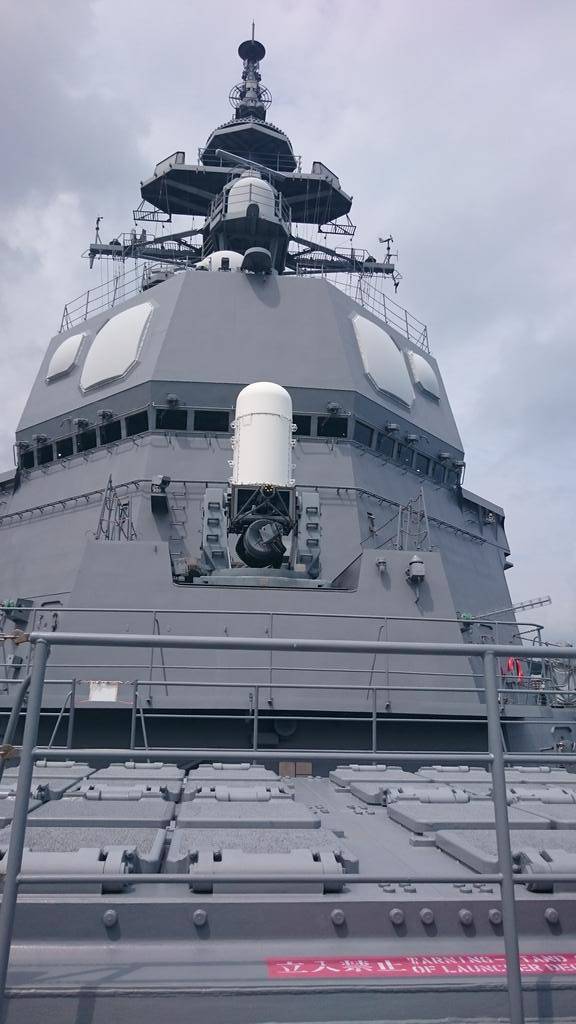 In one form or another (FCS-3A, OPS-50), the complex is installed on all destroyers of the Japanese Self-Defense Forces, starting with the 2009 year. A feature of this RLC is the centimeter range of work, which provides the best resolution (at the cost of reducing the detection range).

Such combat means are prescribed to act in conjunction with Aegis destroyers.

The most formidable and modern - “Akizuki” (“autumn moon”) and “Asahi” (“rays of the rising sun”). A squad of six samurai, who, even in isolation from their senior counterparts, remain one of the best projects in the world of destroyer squadrons. The existing shortcomings (lack of a long-range radar) are overlapped by their main advantage - a clear correspondence to the tasks facing them.

Multifunctional warships (7 thousand tons - enough to accommodate any weapons) with outstanding near-air defense. With long-range goals in the stratosphere instructed to deal with Aegis.

Small ammunition - the illusion of peacetime. The Japanese had already demonstrated a similar focus, with the replacement of the Mogami artillery towers. The cruisers, in secret, were designed for 8 "caliber, but, according to the terms of the international agreement, they carried" fake "six-inch. Until the thunder clap. And the Japanese have four heavy cruisers from nowhere.

In the case of the “Asahi” - a ship with a full w / and 7 thousand tons is clearly designed for more. Surely, there is a reserved space for additional modules of CIP.

Impact armament is missing for political reasons. Taking into account the state of Japanese science and industry, creating their own analogue of “Calibra” is not a problem for them, but minor expenses.

The Japanese authorities are exploring the possibility of creating a production of long-range cruise missiles for attacking ground targets. This publication told a source in the cabinet of the country. Such plans arose in connection with the unstable situation on the Korean Peninsula.
- Sankei newspaper, 28 December 2017

Japan’s own RCC has been established for a long time (“Type 90”). Unified for launch from surface ships and submarines.

Until recently, the Japanese had no noticeable experience in military shipbuilding. Sounds funny to the creators of “Nagato” and “Yamato”. Alas, the experience of the past was irretrievably lost along with the defeat in the war.

For forty years, surface forces were frigates with American weapons. The Japanese conducted their own equipment upgrades (FCS-2 control system for the CS Sporrow air defense system), launched a large-scale production of gas turbine power plants under license (Mitsubishi-Rolls-Royce, Ishikawjima-Harima), but the overall level of the warship looked unworthy descendants of admiral yamamoto.

The breakthrough occurred in 1990, when, with great difficulty, technical documentation was transferred to Japan for the destroyer Arly Burk and the Aegis naval air defense system. 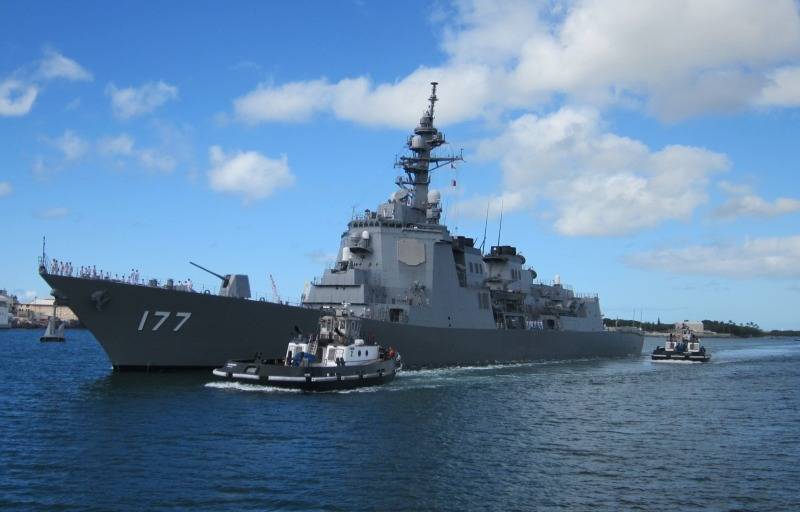 Having obtained the technology, the Japanese immediately built 4 first-class destroyers of the type “Congo”. The name is not related to the African state. “Congo” - in honor of the legendary battle cruiser, participant of both world wars, in translation - “indestructible”.
From their American "twins", the Japanese Aegis are distinguished by a truss mast and more bulky superstructure, which houses the flagship command post.

What happened next is easy to guess. The serial construction of warships on their own projects, combining the best features of Arly Berkov with Japanese ideas about the modern fleet, began. 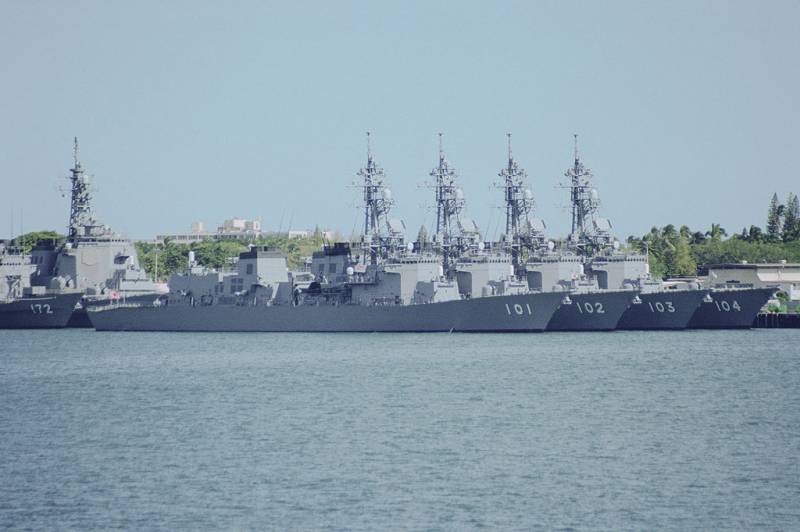 For one decade, 14 destroyers of the type “Murasame” and “Takanami” were put into operation, which became teaching aids on the way of the revival of the Navy. The design of these ships embodied the most advanced solutions of the time (remember, this is about the middle of 1990's):

- solid superstructure “from side to side”, reminiscent of “Burke”;

- elements of technology "stealth". The hull and the superstructure received non-repeating angles of inclination of the outer surfaces, and radio-transparent materials were used in the construction of the masts;

- Combined electronic warfare station NOLQ-3, copied from the US “Slick-32”;

- for the first time in world practice - radar with AFAR;

- a prototype of the new generation of CICS, the development of which later became ATECS (advanced technology command system) - “Japanese Aegis”. Actually, no one doubted the Japanese successes in the field of microelectronics.

- large-scale measures to increase automation, which made it possible to reduce the crew of the Murasame to 170 people;

The rest - without the madness and excesses. The goal was to build reliable and balanced ships, whose appearance matched the current capabilities of the industry.

Need to be taken for the fact that you can finish in one day. Tomorrow will also be only one day.

The Japanese, with their characteristic perseverance and attention to detail, were not even too lazy to build a full-scale “mock-up” of a destroyer with the curious name JS-6102 Asuka. In fact - a test bench for testing new solutions. In view of the almost complete identity of its characteristics to the combatant ships (with the exception of some units and the “hodgepodge” of weapons), the Japanese, if necessary, will have another destroyer. 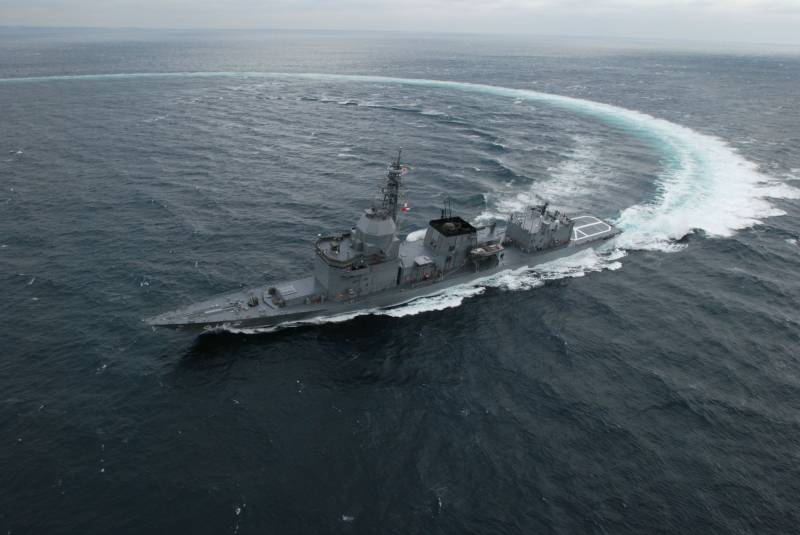 Having mastered the technique of building modern warships to perfection, the samurai moved on to more expensive and technically sophisticated projects. This is how “Akizuki” (2010) and “Asahi” (2016) appeared.

To date, having 30 combat units of the ocean zone, including 26 missile destroyers and 4 aircraft carriers, given the technical level of these means, the surface component of the self-defense defense force of Japan in terms of dignity ranks second in the world. The economic component of success - Japan’s military expenditures make up just 1% of GDP (the leader among developed countries is Russia with an indicator over 5%), and in absolute terms the Japanese military budget is inferior to the domestic one by 1,5 times.

The main question remains - when will the Japanese self-defense forces finally remove their “self-defense” from their name?

Instead of an afterword:

The Japanese naval miracle of the beginning of the 20th century, which turned the Land of the Rising Sun into a superpower, became possible only thanks to the amazing rationalism of "Teikoku Kaigun" (Imperial Fleet). In contrast to the confusion and vacillation that prevailed in the naval headquarters and admiralty of many countries (and especially in Russia), the Japanese did not make almost a single mistake, having adopted from the British allies all the most advanced equipment, tactics, combat training, basing and supply systems , - and in the shortest possible time having created from scratch the modern fleet dominating in the Far Eastern waters.
- from the book “The Triumphants of Tsushima. Armadillos of the Japanese Navy ”, S. Balakin 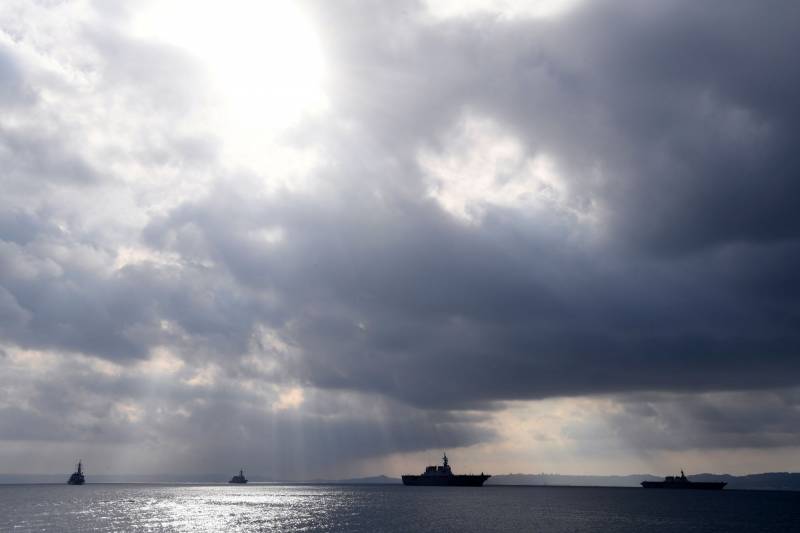 Ctrl Enter
Noticed oshЫbku Highlight text and press. Ctrl + Enter
We are
The Japanese Navy is testing a new destroyerA new type of destroyer is being built in Japan
288 comments
Information
Dear reader, to leave comments on the publication, you must to register.