At the end of 1936 in Japan, in accordance with the "Third Ship Replacement Program" of the Imperial fleet started to create new aircraft-carrying submarines of the A1 (“Ko-Gata”) and B1 (“Otsu-Gata”) projects. They needed a more advanced seaplane than the standing on the armament "Watanabe" E9W1. The requirements for the new aircraft were contained in the 12-Shi specification developed by the fleet, which in 1937 was brought to the attention of the Kugisho, Yokoshi, and Watanabe developers who took part in the competition.

In 1939, the first flights of prototypes of the Kugisho E14Y1 and Vataeabe E14WXNNXX took place. Comparing both projects, the fleet gave preference to the project of the Kugisho company. Work on the creation of a hydroplane for submarines "Kugisho" E1Y14 was carried out on the basis of the 1-th naval arsenal in Yokosuka in the strictest secrecy mode under the guidance of the chief engineer of the project Mitsuo Yamada. 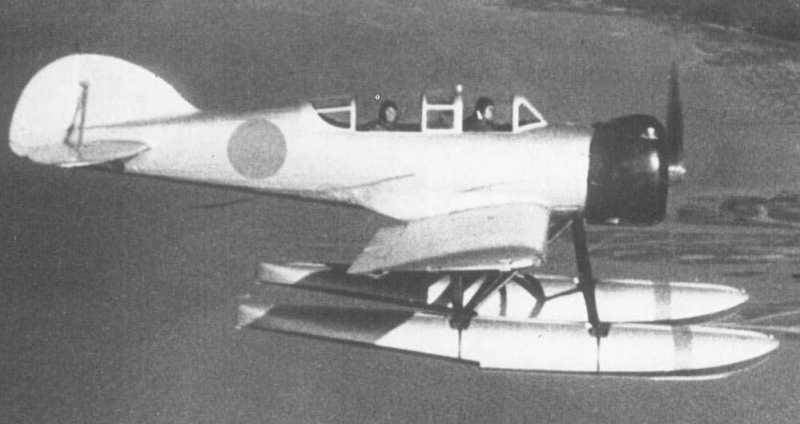 The prototype "Kugisho" E14Y1 was a single-engine double float nizklana mixed design. The new seaplane, like its predecessor "Watanabe" E9W1, had a small size. As a power plant, a Hitachi star-shaped 9-cylinder air-cooled engine GK2 “Tempo 12” with horsepower 340 power with a wooden two-bladed constant-pitch propeller was selected.

The E14Y1 fuselage, having a power frame made of metal pipes, was sheathed with duralumin sheets in the nose and a sheet in the tail. The wing and tail assembly had a mixed construction and linen casing. For placement in the aviation hangar submarines of oval shape with a length of 8.5 meter 2.4 meter wide and 1.4 height meter wing wings were folded along the fuselage. The tail stabilizer was folded down to reduce the height. All-metal floats were attached to the fuselage and wing consoles with the help of racks. When stored in a boat hangar, the floats were dismantled, and the racks were folded under the fuselage.

Layout E14Y1 in the hangar of a submarine

The pilot and gunner-observer were placed in a half-closed glazed cockpit. For communication with the submarine, the observer had a radio station in the cockpit, and for self-defense the 7.7-mm machine gun Type 92 mounted on the henry unit was intended. 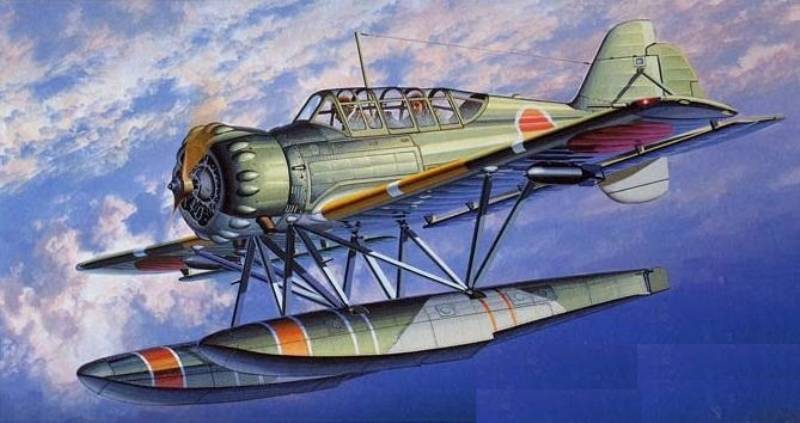 Kugisho E14Y1 seaplane with two 30-kilogram bombs under the wing

Under the wing of the E14Y1 there were bomb racks for two 30-kg bombs. When reducing the stock of fuel and dismantling defensive weapons, and when absolutely necessary and reducing the crew to that person, bomb weapons could consist of two 76-kg bombs.

During flight tests, the Kugisho prototype E14Y1 developed a maximum flight speed of 239 km per hour. Cruising speed at an altitude of 1000 meters was 157 km per hour. The empty weight of the prototype was 1130 kg and exceeded the requirements of the 12-Shi specification for 180 kg, which, combined with a small supply of fuel in 200 liters, determined the low normal flight range in 480 km (Watnabe's E9W1 had the same indicator as 590 km). This clearly did not suit the customer. In addition, in the course of flights, unsatisfactory travel stability was revealed. 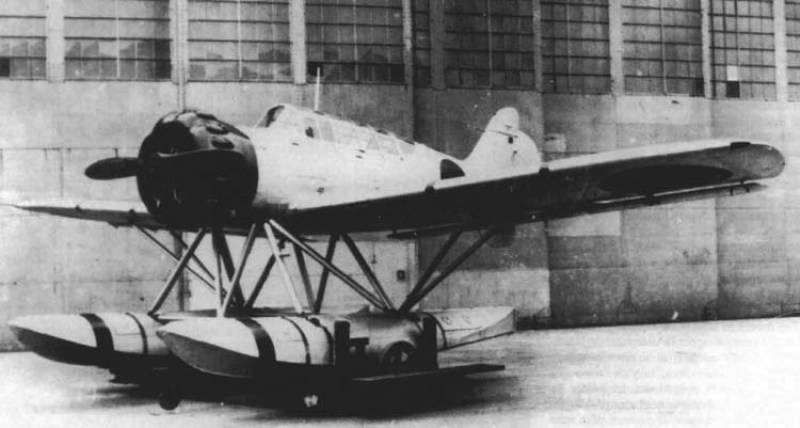 One of the first serial Kugisho seaplanes E14Y1, Yokosuka, 1940 year

The identified deficiencies were eliminated during the construction of the pre-production batch of E14Y1 (in the amount of 10 units) in the 1940 year. The design of the aircraft was facilitated by 80 kg, fuel capacity increased to 340 liters. Under the fuselage installed a small falshil and increased the area of ​​the main keel. The cockpit has become completely closed.

Reconnaissance seaplane "Kugisho" E14Y1, based on the submarine I-7, 1941 year

The first two pre-series E14Y1 samples on tests showed improved flight performance. The maximum speed in steady horizontal flight increased to 246 km per hour, and cruising to 167 km per hour. Normal flight range increased to 822 kilometers, and the maximum was 1074 km. The practical ceiling at the same time made 5420 meters.

With low seas, the submarine E14Y1 stored in the hangar and its launch with the help of a pneumatic catapult took a quarter of an hour to prepare for the departure (an experienced calculation could have performed this operation in 6 minutes and 23 seconds). The plane that was driven down at the end of the flight was lifted by a special crane onto the deck of the boat, disassembled (folded) and placed back in the hangar. The fleet command was satisfied with the test results. 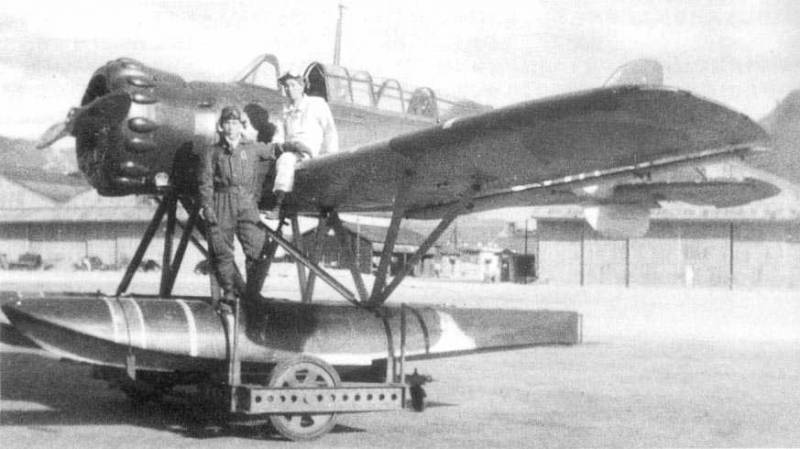 Kugisho E14Y1 from the Japanese Navy airbase in Fukuyama, December 1944

In December, the 1940 of the new naval reconnaissance aircraft for basing on Kugisho submarines under the designation E14Y1 model 11 was adopted by the Japanese fleet. The serial production of the seaplane was entrusted to the Watanabe company in Ykosuka. The total number of E14Y1 built by her was 136 copies, two more prototypes were created directly by Kugisho. 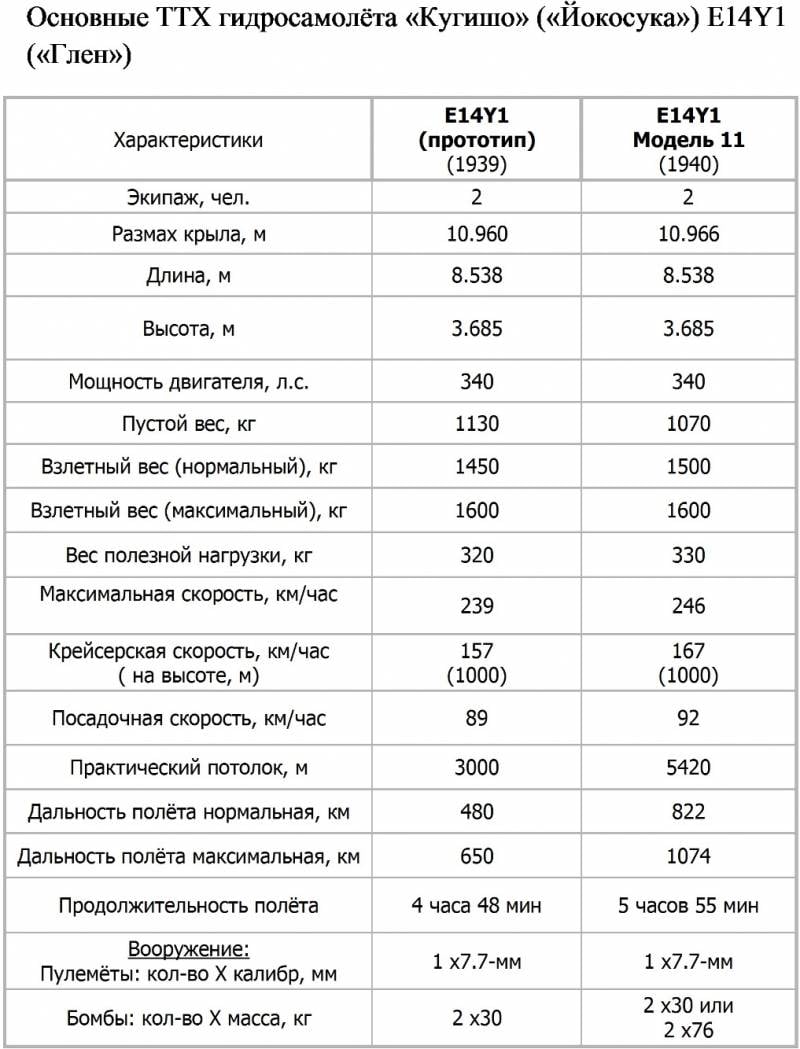 The combat experience gained during the operation of the first aircraft-carrying Junsen submarine projects (J2 and J3) was taken into account when developing a whole series of shipbuilding programs for the construction of new aircraft-carrying submarines of the A1 / A2 (Ko-Gata) and V1 / XXNX projects ("Otsu-Gata"). All of them were designed for the deployment and use of the new Kugisho E2Y3 reconnaissance seaplane.

The plane with dismantled wing consoles and removed floats was stored in a single hangar, which was now located in front of the conning tower in the same complex with it. Starting pneumatic catapult was also located in the bow of the deck of the boat, so the launch of the seaplane could be carried out while moving it at full speed. In order to fulfill the flight task, the plane, as before, was landing on the water near the submarine and its crane was lifted aboard, and at a height of waves of more than one meter it was no longer possible to land on the water.

All submarines of the above projects had a double-hulled construction, a working depth of 100 meters and autonomy up to 90 days. The main armament consisted of six 533-mm nose torpedo tubes (the stock of torpedoes ranged from 17 to 19 pieces). Artillery weapons included one 140-mm gun and anti-aircraft guns caliber 25-mm. 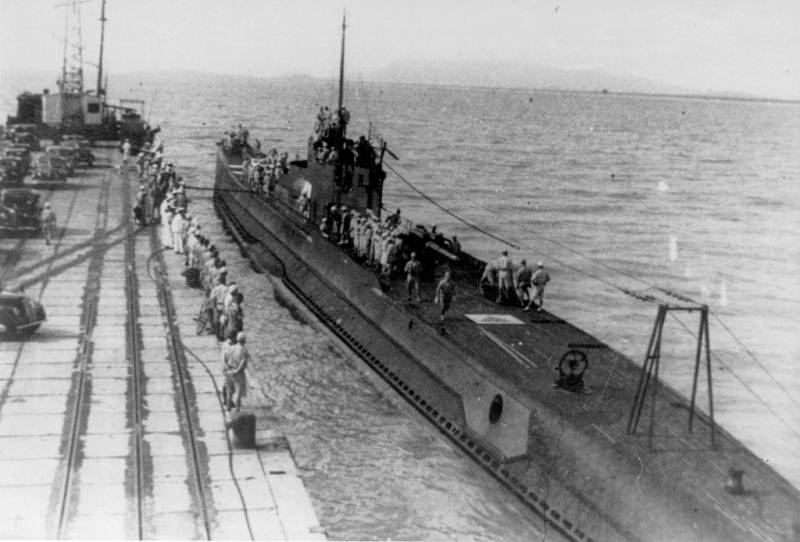 Aircraft-carrying submarine I-10 of project А1 ("Ko-Gata") at the pier, before being sent on a long voyage, 1942 year

In 1938, the first boat I-9 of Project A1 ("Ko-Gata") was laid. It was a further development of the project of heavy aircraft-carrying submarine cruisers of the J3 project ("Junsen 3"), but with a modified aviation weapons. In total, until the year 1942, three submarines of this type were built (I-9, I-10 and I-11). All of them could act as flagships of submarine squadrons, as well as be used for relaying radio messages for ships performing combat missions at a considerable distance from the bases (there was appropriate equipment for these purposes).

These were quite large submarines (surface displacement was 2919 tons, and scuba - 4149 tons) and speed (23.3 node in the surface position and 8 nodes in the underwater). But the powerful power plant (12400 horsepower in diesel engines) did not differ in efficiency, the cruising range on the surface did not exceed 16000 miles at a speed of 16 knots.

The only submarine of the A2 project, built during the 1942 period - 1944, largely repeated the A1 boats. I-12 had a more economical power plant of lower power (in two diesel engines there were only 4700 horsepower). The maximum surface speed dropped to 17.7 nodes per hour, but the cruising range increased significantly (22000 miles with the same 16 nodes).

In the same 1938 year (at the same time as I-9), the lead submarine I-15 of the B1 project (“Otsu-Gata”) was laid. It was the most numerous series of aircraft-carrying submarines - the last of the 20 built boats I-39 was commissioned in the 1943 year. The boats of the V1 project were created on the basis of the Kaidai 6 project, but with A1 (Ko-Gata) aircraft armament. I-15 differed from I-9 in smoother contours of the hull and cutting-hangar complex. The production of the B1 series differed from A1 and the best manufacturability - electric welding was used in the manufacture of some light-body structures. 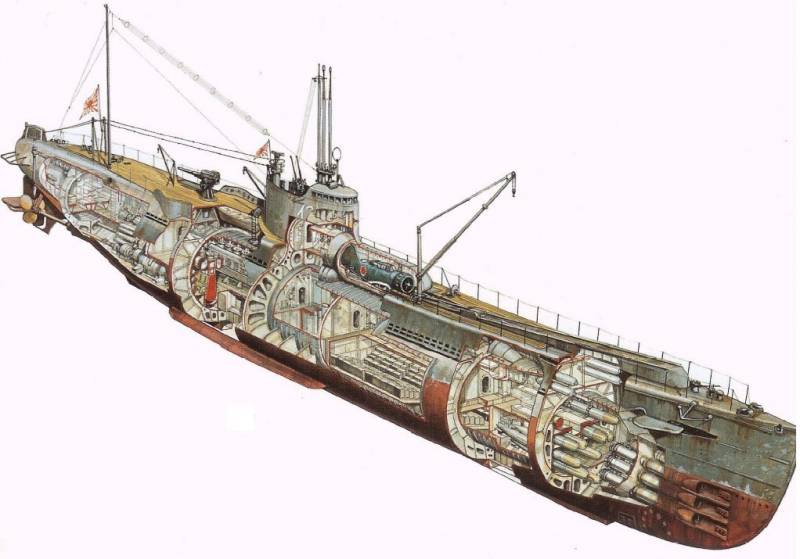 Schematic device for aircraft carrying submarine I-25 of type В1

Part of the V1 project boats were commissioned without aircraft armament, instead of it, a second 140-mm gun was installed before cutting. A separate exception in the series was the boat I-17, on it the hangar adjoined the aft deckhouse. The launch catapult also moved to the stern of the deck of the boat.

The boats of the V1 project, in comparison with A1 / A2, had a much smaller displacement - 2589 tons in surface position and 3654 tons in submerged. Combining the qualities of cruising and squadron submarines, they could operate effectively with both the main forces of the fleet and conduct long-range reconnaissance.

Powerful power plant (12000 horsepower in diesel engines and 2000 in electric motors) provided submarines with a high speed (23.6 nodes in the surface position and 8 nodes under water). But the increased fuel consumption limited the cruising range on the surface - 14000 miles at speed in 16 nodes.

Submarine cruiser I-27 of project В1 ("Otsu-Gata") modified into carrier of mini-submarines, 1944 year

Aircraft-carrying submarines of type B2 (“Otsu-Gata”), built with a series of six units in 1942 - 1944, differed from B1 with a slightly lower powerplant, better living conditions for a crew of 101 people. The sailing range remained the same, and the speed characteristics changed slightly. Already after commissioning, the aviation equipment was dismantled on some submarines, and a second 140-mm gun was installed instead. 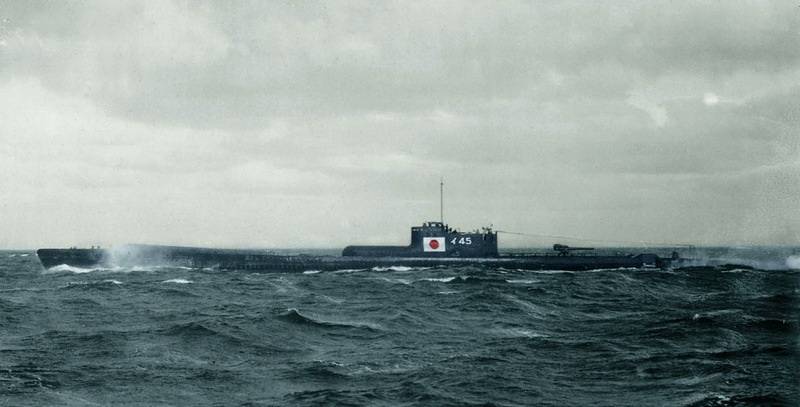 In 1945, the I-44 submarine lost all 140-mm guns and became the carrier of human-guided torpedoes, the Kaiten. A year earlier, the I-36 and I-37 boats of the В1 project went through a similar “upgrade”.

On boats of type B3 ("Otsu-Gata"), which were built during the same period, a small series (I-54, I-56 and I-58), in order to increase the cruising range (similar to type А2) were installed less powerful, but more economical diesels. As a result, it was possible to increase the range to the 21000 miles with a travel speed in surface position in the 16 nodes. 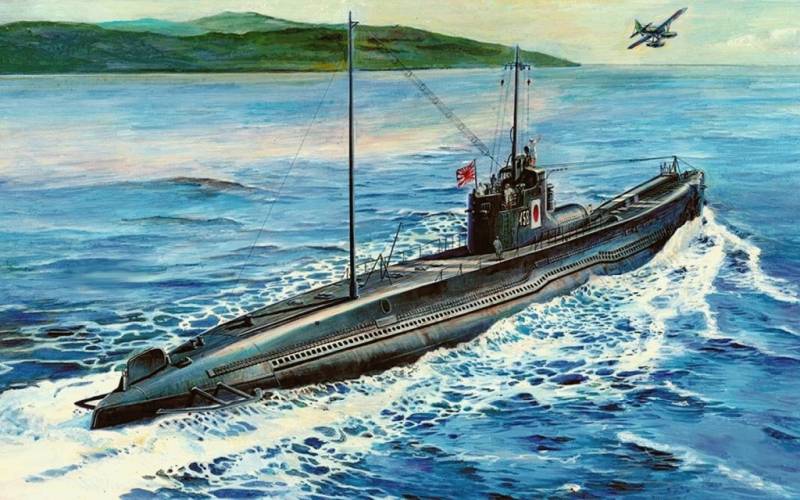 The I-58 airborne submarine launched the Kugisho reconnaissance plane E14Y1, autumn 1944 of the year

At the end of 1944, I-56 and I-58 lost their aviation and artillery weapons and also became carriers of the Kaitens. 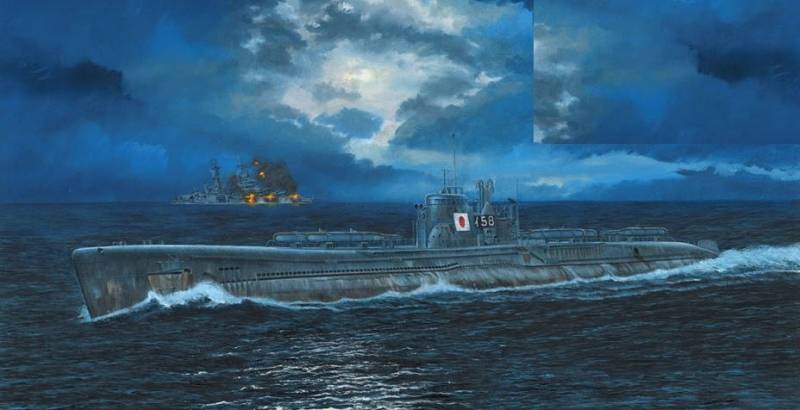 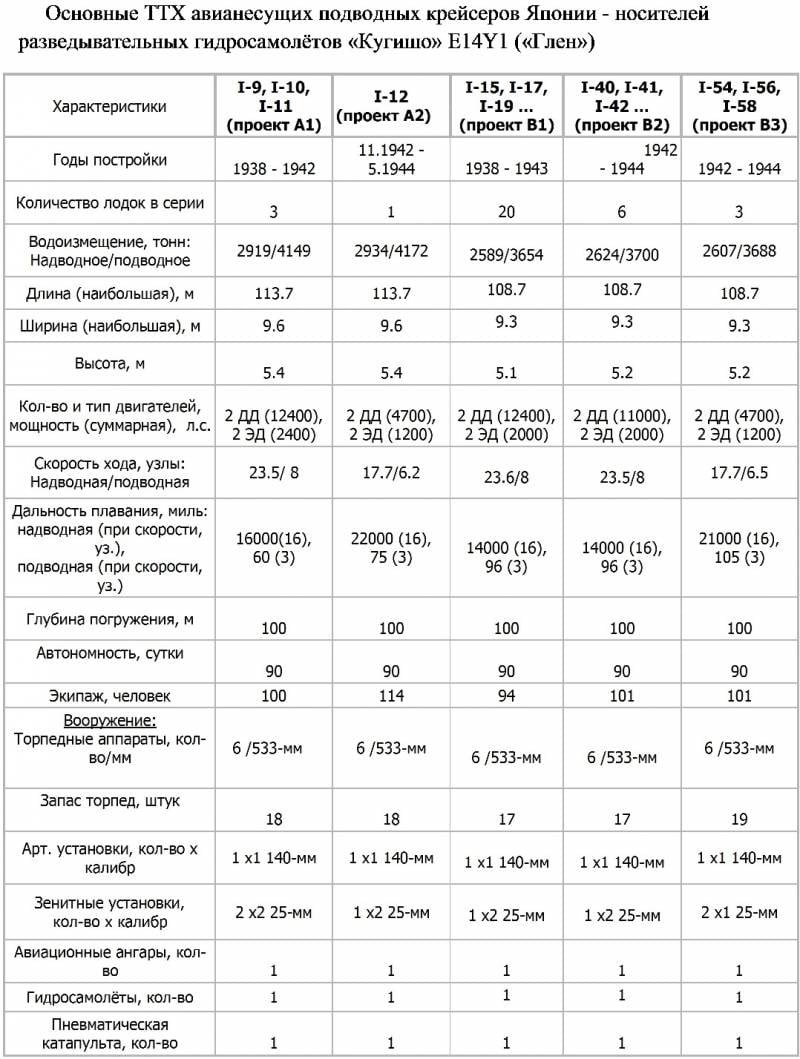