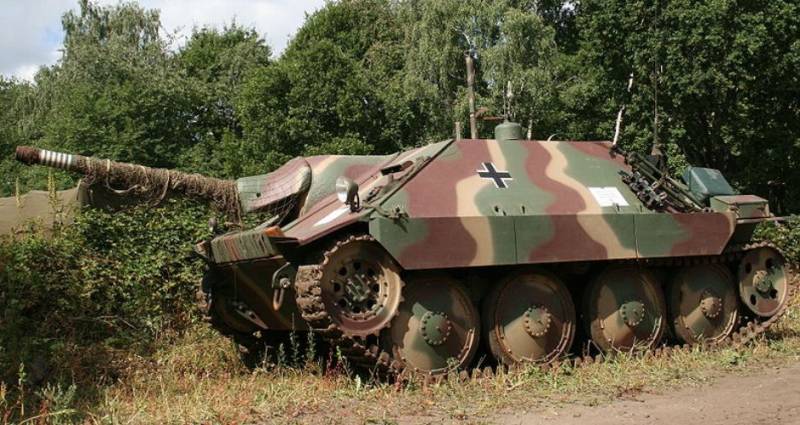 As is known, the Czech industry during the Great Patriotic War made a huge contribution to equipping the German army with military equipment. Perhaps the most significant role of highly skilled and industrious Czech designers, engineers and workers have played in providing armored vehicles to Germany.

Out of seventeen tank of the Wehrmacht divisions that participated in the attack on the USSR in the summer of 1941, six were armed with Czech-made tanks Pz. 35 (t) and Pz. 38 (t).

At that time, they accounted for almost a third of the German tank fleet. In addition, the Czech armored vehicles were in service with the armies of Slovakia, Romania and Hungary - allies of Hitler. Later, when the Czech tanks were rapidly becoming obsolete, Czech manufacturers reoriented to the production of self-propelled guns.

One of these self-propelled gifts Fuhrer - "Hetzer". This name was assigned to the car at the direction of Hitler. Among the options for translating the name into Russian, the word “Huntsman” is often used.

"Hetzer" (or Jagdpanzer 38) was developed by the Czechoslovak firm BMM on the chassis of a light tank PzKpfw 38 (t) at the end of 1943 - early 1944 years as a cheaper and mass replacement of assault guns StuG III, but was reclassified as a tank destroyer, is intended to first of all for the acquisition of anti-tank units of infantry and cavalry divisions.

You lost nothing by playing a little in the infantry

Heinz Kün is one of those who happened to fight on the Czech Hetzers and command them. Prior to that, he spent most of the war in anti-tank artillery (Site "I remember", section "Allies and opponents"):
“My first weapon was the 37-mm gun, which on the Eastern front from the first days proved its almost complete uselessness. It got to the point that they were forced to retrain for infantry - they fired from the MG, carbines. For example, when I was in the 188 Battalion of the 88 Infantry Army, we, however, were listed as tank destroyers, but because weapon absent, we were given the infantry. The commander was, I remember, one infantry captain, originally from Darmstadt. So, he told me then: “You didn’t lose anything by playing a little in the infantryman. You learn a lot of useful things. ” He was right. I learned a lot in infantry, among other things, in terms of shooting. The infantryman has a heightened sense of advance, unlike a tank destroyer, usually located somewhat behind, they are more likely to assess the danger. He must clearly imagine where the enemy is. ”

The fact that on the Eastern front the 37-mm gun was almost useless, Kühn was clearly convinced by the first meetings with the T-34 or KV.

The French 47-mm gun in the winter immediately failed

Later, he gained a lot of experience, which allowed him to evaluate the weapon he received and his suitability for the Eastern Front: “After that he was armed with an 75-mm anti-tank gun - this is already a serious weapon. The guns were transported by 10 - 12-ton tractors, usually from Maybach, but there were other factories. Even later, they switched to self-propelled chassis based on outdated tanks. During the re-formation in France, we were armed with captured French weapons, absolutely unsuitable for the war in the East — we had to give up everything after returning to Ukraine. For example, the French had a rubber run. He could only move on a very good road. It was worth the rain - and he was already skidding. The French 47-mm gun in the winter immediately failed, unable to withstand frost. The French motorcycles, unlike the low German ones, were tall - the motorcyclist was an excellent target. ”

Due to the low landing, "Ranger" were less vulnerable

And at the final stage of the war, he had a chance to get acquainted with the products of Czech masters: “At the end of the war, in Kurland, he fought as part of the 731 divisional anti-tank battalion on the Eherei (Hetzer -“ Hetzer ”), self-propelled on the chassis of the Czech tank - factory“ Skoda ", armed with 75-mm cannon and MG machine gun 34. Due to the low landing, the “Rangers” were less vulnerable - shells usually flew over us without touching - and perfectly camouflaged the terrain using small heights - the landscape in Kurland was hilly ... There were four cars in each platoon, they were approximately in combat a hundred meters from each other, sometimes this distance was long — it depended on the specific conditions of the area. ” He recalled the characteristic shortcomings of the Hetzer: “Too closely inside, weak side armor, for reloading the machine gun it was necessary to get out of the tank.”

There are other disadvantages of the Hetzer. The gun had the most minimal angles of horizontal guidance (16 degrees) among all German self-propelled guns. The commander had a bad review.

But at the same time, the Hetzer was a serious enemy in the melee, very dangerous during ambush operations.
In addition to his memories, Kün referred to a note from the 16 Army Field Paper from 4 in March 1945, describing a successful battle that the Germans won under his command:

“To repel the enemy’s breakthrough in the front section of the Rhine-Westphalian infantry division, seven“ Rangers ”(tank destroyers) and three self-propelled guns of Sturmgeshütz under the command of 24-year-old hauptman (captain) Kühn from Deutzen near Borne were involved. Their task was to support the Fusilier company counterattack. Fuzilery occupy the original position. At lunch, on the hilly, dug-out shells, the main line of defense is the “Ranger” and the self-propelled gun of Sturmgeshütz. After a brief massive strike by our artillery, tank destroyers led by the commander suddenly appear in front of enemy trenches - and the first shells of the Huntsmen in the ranks of the Bolsheviks are already falling. Captured by surprise, the paralyzed reds (Sowjets) stare at the fearsome "Ranger", not noticing how the SAU of Sturmgeshütz sneak up on them. And here they stand on their right flank, firing from all trunks. Simultaneously with the loud “Hurray!” Fusilers hit the enemy’s flank, their machines gather a rich harvest among the running Bolsheviks. Headlongs jump out of the trenches and the rest of the red (Sowjets), trying to escape across the field into the forest. But here, too, they are overtaken by shells and machine-gun firemen of the “Huntsmen” ... A considerable number of killed and even more wounded Bolsheviks testify to the bitterness of the battle. Four prisoners, six machine guns and many small arms were captured. The battlefield is behind us, the enemy breakthrough has been eliminated. “With redoubled selflessness, the soldiers fulfilled their task, with each shot they revenge with red (Sowjets) for what they do in our homeland with our women and children.”

"Touches", of course, a reference to the insults of women and children, for which it is necessary to avenge "red." The fact that the "red" in previous years had accumulated a lot of reasons for revenge, the Germans did not remember.

And it is very unpleasant to read the description of the defeat of the Soviet unit. Alas, it is very similar to the truth. A German front-line journalist does not write about participation in the battle of Soviet tanks and guns, about their destruction or capture. And without tanks or artillery shells our infantrymen could not resist the attack of 10 armored units with infantry ...

The first self-propelled self-propelled guns "Hetzer" (Jagdpanzer 38) left the gates of the VMM plant in April 1944. All in all, the Czechs managed to manufacture 2827 for Hitler of such machines - perfectly masked tank destroyers. Over how many Soviet tanks they destroyed and killed the infantrymen, it’s not customary to think about it, either in our country or in the Czech Republic. Must be for reasons of tolerance.

Ctrl Enter
Noticed oshЫbku Highlight text and press. Ctrl + Enter
We are
Iron fist of the Red Army. Motorized and tank divisionsArmored vehicles of Germany in the Second World War. Part of 2. The evolution of the organizational forms, the composition of the Wehrmacht Panzervawe and the SS troops
193 comments
Information
Dear reader, to leave comments on the publication, you must to register.